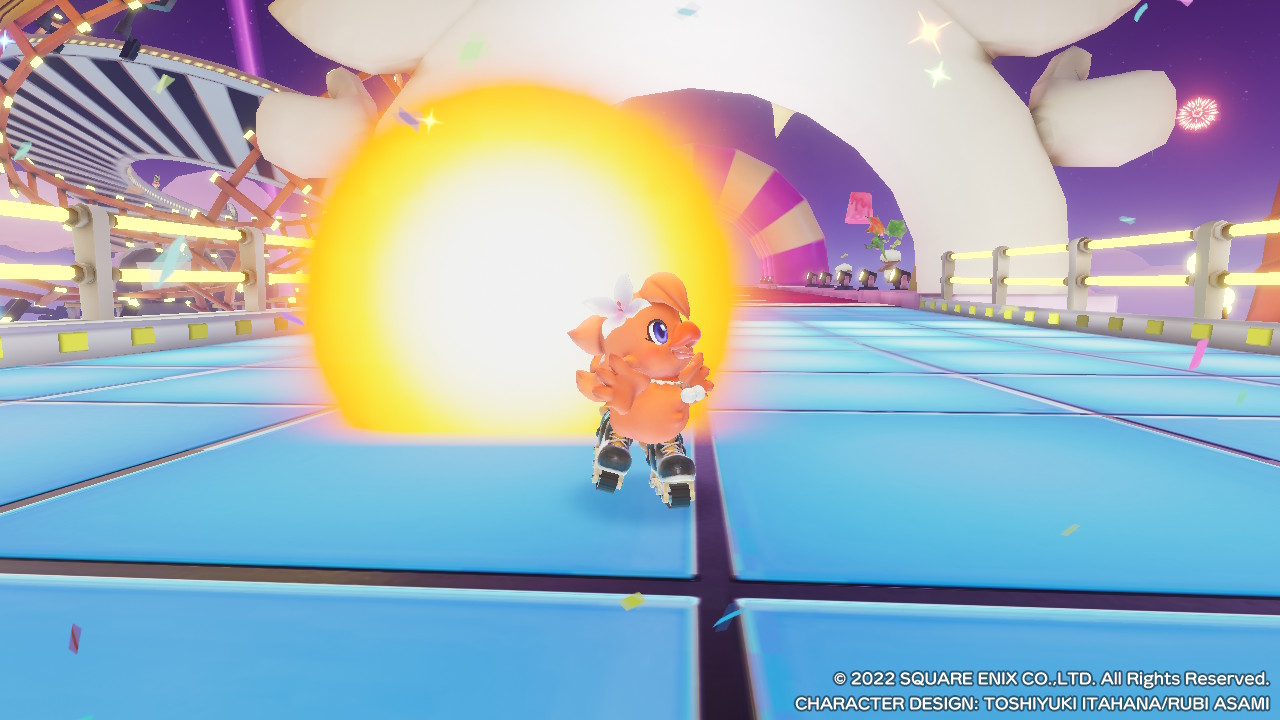 The time when every franchise had a kart racer has come and gone. None could dethrone Mario Kart, but many such as Crash Bandicoot, Little Big Planet, and Garfield have tried. Even Final Fantasy threw its hat into the ring back in 1999 with Chocobo Racing on the PlayStation 1. It wasn’t terribly well received back then, but nevertheless prompted a second try over 20 years later with Chocobo GP on the Nintendo Switch. While it still has no chance of overtaking Mario Kart 8 Deluxe, this is still a race worth catching a ride for.

Chocobo GP stars, well, a chocobo named Chocobo along with their best friend Atla, a Moogle, as they enter a race to have their wishes granted alongside a colorful cast of characters. Yes, this game has a story mode and it knows that’s silly and unnecessary in this kind of game so the writing and voice acting are as hammy as possible. It’s kid friendly and decently charming, even if some of the recurring jokes can get tiring. Story mode serves as both a tutorial and the primary way you’ll unlock courses and characters. Each chapter introduces a few new characters and a new track, and completing the chapter will unlock the characters who join your party and those that don’t become available for purchase in the in-game shop. It’s a pretty short mode and teaches you most of the game’s mechanics throughout.

Aside from unlocking everything, the best reason to play story mode is to learn how the game’s Magicite crystals work. Just like Mario Kart’s item boxes, passing through an egg will grant you a Magicite. While you can store up to three Magicite, having multiple of the same type will increase the potency of that spell. For example, a single fire just shoots a fireball directly in front of you, while two or more fires (fira or firaga) will have the attack home in on racers ahead of you. There are quite a lot of spells, so the story’s slowly introducing you to them one or two at a time is appreciated.

While the strategy of using an item immediately or holding on to it for a bigger advantage is interesting, in execution the game kinda ends up a cluster-cluck. Item eggs are everywhere, including all three variants (gold gives you a level 2 spell, red gives you one random spell, and blue gives another level of what you have). NPC racers don’t seem to have any sort of strategy with item usage, so what ends up happening is hazards are constantly bombarding you from every angle – even if you race your best you could finish last because you get hit by multiple items in a row having to spend a few seconds getting back up each time. 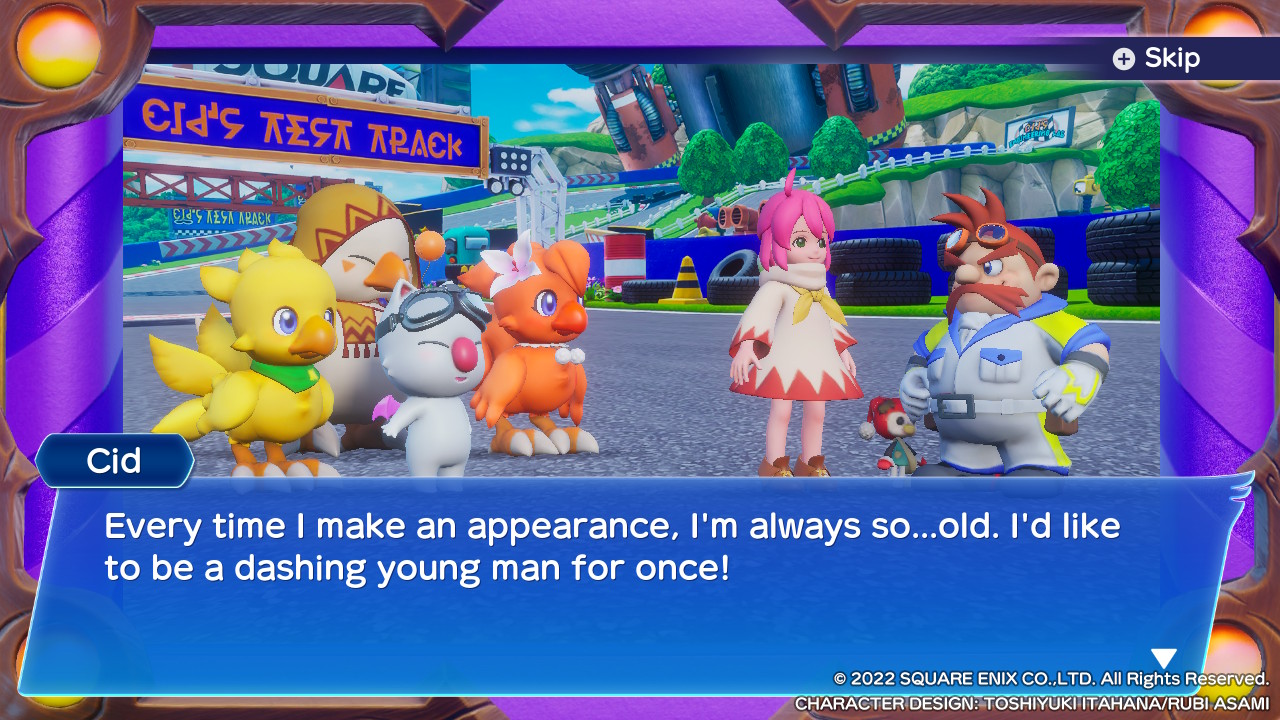 The tracks themselves can feel similarly haphazard. There are only 9 unique courses in the game, with some having two to four variants, but most of them feel pretty bland and similar. It also feels as if the handling model and tracks were designed by two different teams. In the Gold Saucer stage, there’s a turn right before the finish that is two 90 degree angles with no guardrail. The game’s drifting and turning radii can’t possibly accommodate for this at the speeds you reach, so you have to pump the brakes a bit to safely make it. Once again, NPCs have no concept of this and routinely fall off.

Despite all the issues Chocobo GP clearly and consistently has throughout, I still had a lot of fun playing it. Sure, it can feel wildly unfair at times, either for you or the NPCs, but in kart racers the chaos is part of the charm. Plus it’s nice to see all these Final Fantasy characters like Steiner, Terra, Vivi, all the summons, and Gilgamesh together. The game leans into the cheese and fanservice in a delightful way, like the frustratingly catchy theme song that permeates each menu. Heck, Square even brought back their old logo from the SquareSoft days you can see on Cid’s test track which is a super cute detail. Thankfully if you get bored of one mode, there are several others that will catch your attention. 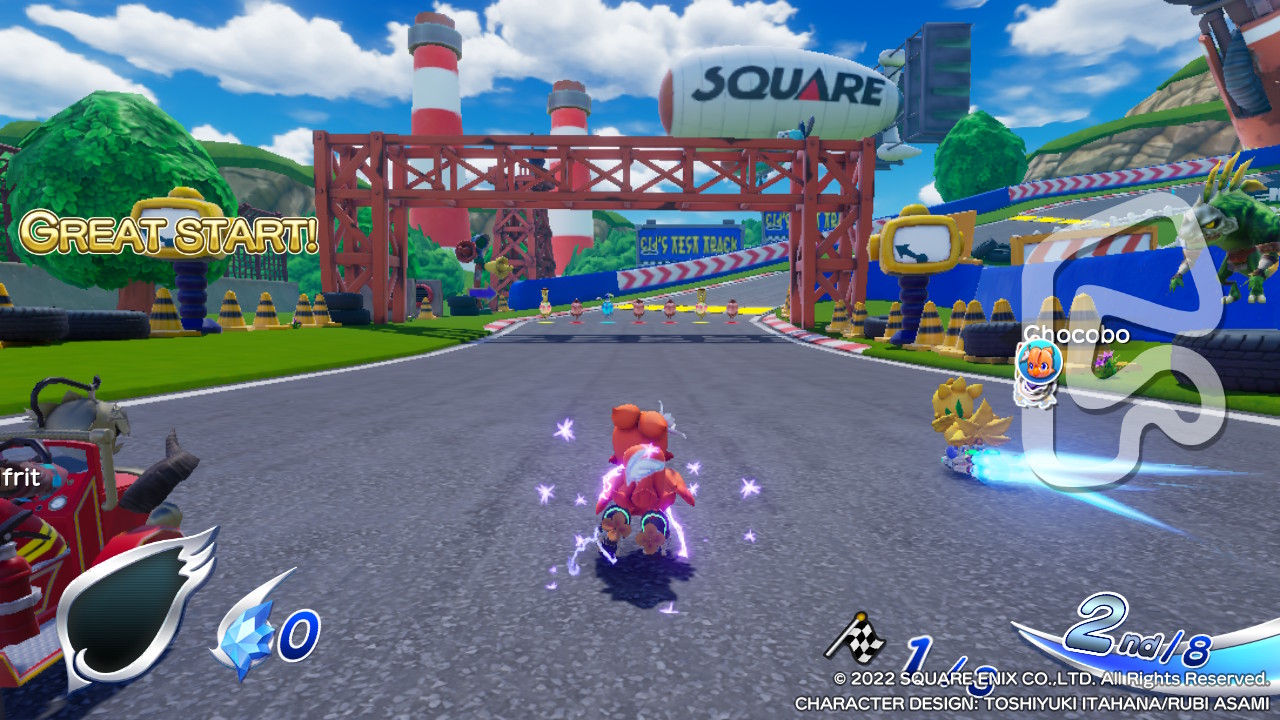 We’ve already talked about Story mode, and of course there’s a multiplayer mode which is self explanatory, but there’s also Series Race (basically the Mario Kart style cups), Time Trials, and the GP the game is named after. We sadly haven’t been able to try out that last one due to it requiring 64 players online, which isn’t possible prerelease, but I did spend a lot of time in Time Trials and Series Race. Time Trials allow you to race each track with no items to get the best times or beat another player’s ghost. While the tracks are still pretty bland and the handling feels stiff, it’s nice to be able to focus on the simple joy of racing without distractions. Series Races are the polar opposite: four races in a row with 8 total competitors, whoever gets the most points by the end wins. There’s no way you can win these without both luck and skill, and they’re just short enough to be decently replayable if you have a few minutes free. Sadly, the tracks are still pretty bland here and the lack of unique tracks is a sore spot. The final Series is actually just all four variants of the final track, which gets tiring really quick.

Something of note that’s also impossible to review prerelease is that Chocobo GP is going for some form of the live service model, which new characters (and maybe courses) added over time and unlocked through the GP. While it’s not available now, I suspect you’ll also be able to purchase these through microtransactions in the shop given it has three types of currencies and I’ve only earned one type through normal play. There will be a free, Lite version of the game on launch, so thankfully you can try before you buy. I am usually wary of this monetization model, but I think it could work in a kart racer, especially in one so light on content at launch. Time will tell, but if Mario Kart can add even more stuff so can Chocobo GP.

While it can be complete chaos most of the time, Chocobo GP is still a fun and charming kart racer at its heart. There’s enough charm here to combat the frustration and bland tracks, and the multiple modes will keep you interested.

David is the kind of person to wear his heart on his sleeve. He can find positives in anything, like this is a person who loved Star Fox Zero to death. You’ll see him playing all kinds of games: AAAs, Indies, game jam games, games of all genres, and writing about them! Here. On this website. When not writing or playing games, you can find David making music, games, or enjoying a good book. David’s favorite games include NieR: Automata, Mother 3, and Gravity Rush.
Related Articles: Chocobo GP
Share
Tweet
Share
Submit