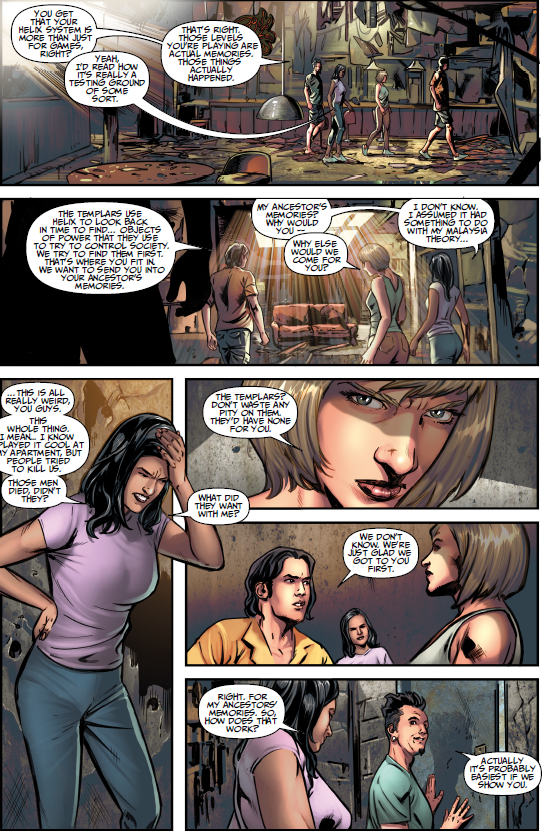 In the later part of 2015 Titan comics introduced us to the Assassin’s Creed comic series, which told us the tale of Charlotte ‘Char’ de la Cruz and her adventures as the Assassin Brotherhood’s newest draftee in their clandestine war against the Templar Order.

This monthly five part series, which came to its conclusion just this past February, had us reading about Char’s impulsive and dangerous dive into the murderous underworld of not only her time, but that of her ancestor’s, the venerated Assassin Tom Stoddard, as he embarked on a mission to find and secure an ancient treasure amidst the growing unrest of Salem Witch Trials era Massachusetts.

Now as we round the corner of Titan comic’s next Assassin’s Creed series release, Templars, we give a more critical look back into what the books have accomplished so far.

The art of Assassin’s Creed is detailed, immersive, and true to the scenes that it’s trying to depict. The lines are sharp and crisp, making every action, location, and pose easy to grasp regardless of the scene. The characters themselves are quickly recognizable amongst their peers, and the selections of color pop off the page without clashing or bleeding together, even when the artists are working with limited pallets.

I give particular praise to the art because in a story like Assassin’s Creed, settings, situations, and character designs can go through drastic shifts in a short period of time. Where in one panel you have character staring into the soft muted hue of a monitor screen, in the one beside it we may have a colonial era nursemaid fleeing a town on horseback. While in context to the story as whole this can make perfect sense, and a orchestration of art on a single page it can look quite the mess.

Almost immediately into your read of Assassin’s Creed you will find the overall visual composition of the books is pretty spot-on, and at times downright theatrical. There are times with comics where stylistic expressions muddle the book’s ability to tell the story, or even try to steal the spotlight, but in Assassin’s creed’s case they are very much in harmony, which is impressive to see considering how many talents were collaborating in this single work.

If there were any troubles that I had with the art (and I’m not even entirely sure that it’s the art where I should level this critique) it was the occasional placement of the dialogue and monologue bubbles. Particularly in some expository sequences following an action scene, where the characters dialogue isn’t entirely encapsulated in their panel, exchanges can become difficult to follow, breaking your immersion as you try to figure out who was responding to who and when. It’s a great technique to give a two-dimensional page a three-dimensional feeling, but requires a little more attention in this area to hold it all together.

The story of the Assassin’s Creed comic itself is a bit more of mixed bag. It’s not a question of it being good or bad (all together and individually this plot holds up very well), it’s really more about the questions that are asked, how they are answered, and if that will be enough to satisfy you.

Without getting into spoiler territory, it’s safe to say that Charlotte’s recruitment into her particular Assassin Brotherhood cell is to address a particular need, and although the end of this five part series largely resolves that conflict, a great deal of the other mysteries that arise between those two points are only tentatively addressed.

Assassin’s Creed feels a little like a bait and switch. You feel like you’re about to embark on this big journey with these people and in some ways you do, but then it turns out this is just an introduction to the world instead of the Odysseus epic you expected; albeit an elaborate one.

There are certainly far worse sins a comic adaptation of a video game series can commit than not offering enough of its goodness, but especially considering the way this series wraps up, not having more might make you resent even getting a taste.

The arrival of Assassin’s Creed: Templars might ebb your suffering a bit if you find its characters as engaging as Char ( or maybe even preferable to her), but in my opinion Assassin’s Creed needed to either end with a bigger bang or dangle fewer fruits of intrigue in order for me to feel completely happy with it’s conclusion. However, if you’re the kind of reader who is really more about the journey than the destination, this is a really good read, and a fantastic collaborative effort to engage the Assassin’s Creed lore.

Assassin’s Creed the comic is a great opening salvo for Titan comic’s upcoming narrative exploration of the video game series’ lore. With its detailed artwork and cleverly assorted plot elements this series might prove to be one of the best adaptations we’ve seen in awhile. The only thing holding this mini-series back might be the fact it’s ultimately more of an introduction to the world and it’s lore than stand-alone adventure, but this is seriously matter of taste, not of quality. This series is very good.

I've been a huge fan and critic of games and movies ever since I had a voice to speak about them. I love power and influence of great storytelling, interactive and otherwise, and now want to be more than just a consumer. My biggest strength in this regard? Almost every time, I'm fair all the time.
Related Articles: Assassin's Creed Comic, Beyond the Page
Share
Tweet
Share
Submit