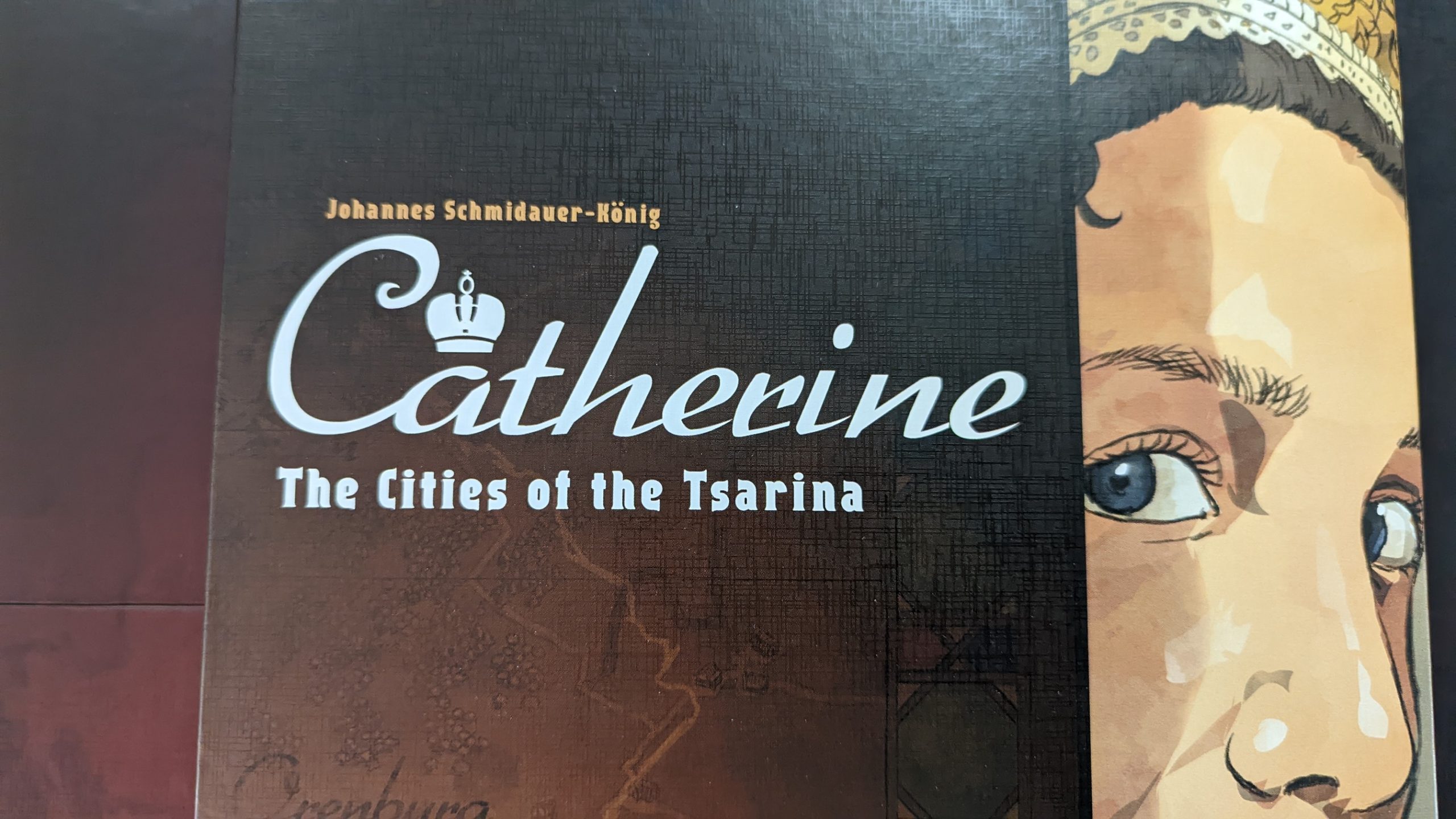 In my continuing quest to collect games that work with both my non-gaming family and my gaming friends, finding Catherine was a resounding success. Most of these games work by laser-focusing on one mechanic and doing it well, and Catherine’s is hand management. 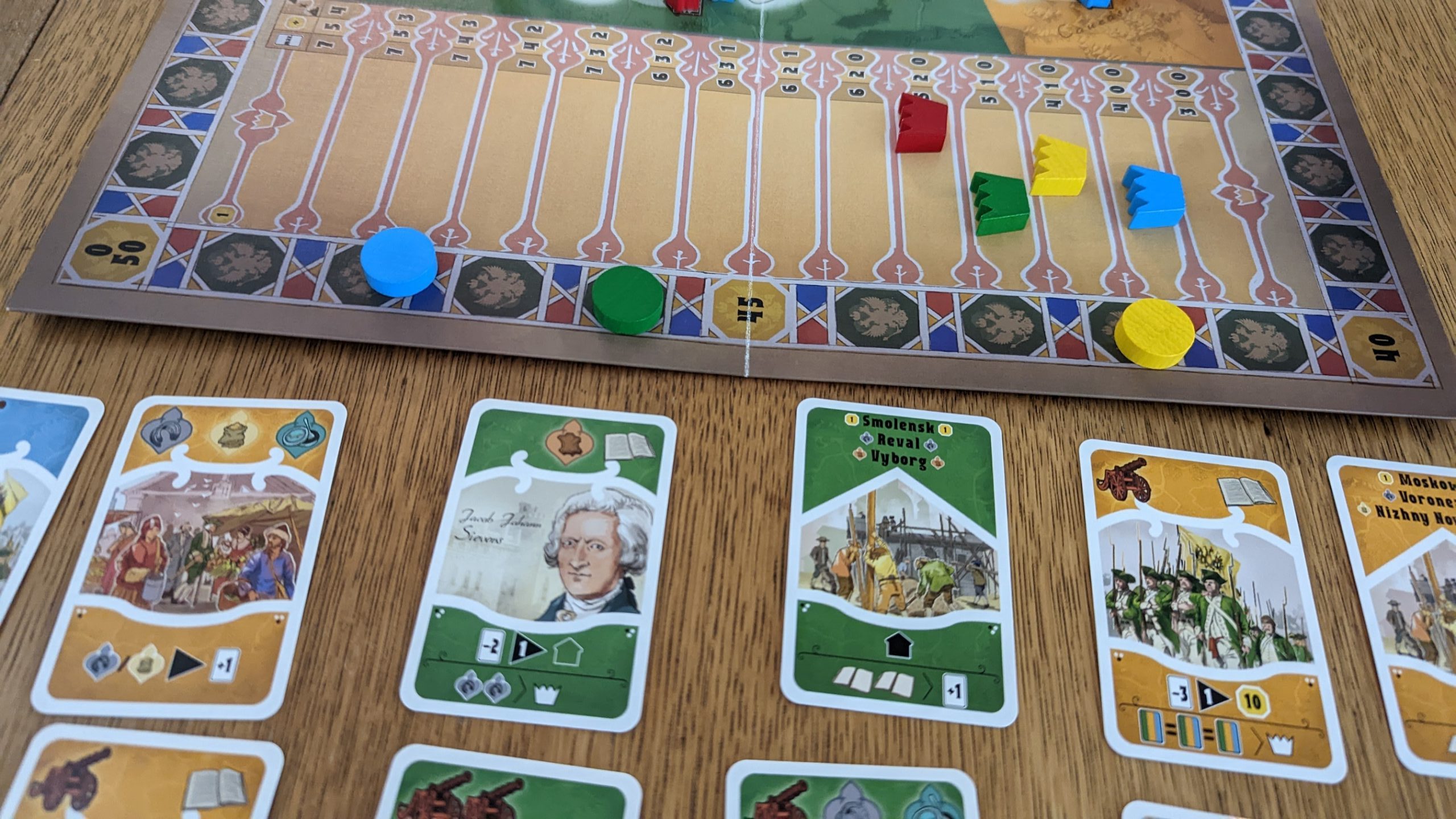 The rules are rather straightforward: each round, players draw two cards and play one to each of their two rows. Cards in the top row contribute their icons for various uses, but primarily have actions and bonuses that will go off when a card of the same color is played below it. These actions range from simple scoring opportunities, to drawing cards, placing houses on the map, or, most importantly, moving up the favor track. The favor track determines max hand size, provides in-game scoring, and has a multiplier for your latest network of cities, so you’re going to want to work your way up that bad boy whenever you get the chance.  The real crunch factor is deciding whether to use cards for their actions, or to trigger others. Every four rounds counts as one of the game’s three decades, an intermediate scoring phase where players will compare book and cannon icons before scoring points for map presence and their progress on the favor track.

Excellent graphic design makes the already simple rules even easier to teach, to the extent that I suspect that a sufficiently seasoned gamer could probably learn how to play without opening the rulebook. Don’t get me wrong, nobody is ever going to accuse Catherine of being attractive, but the iconography is consciously limited and immediately understandable, and a section on the top right of the board walks you through every step of the game. The back of the rulebook features a glossary for each card’s actions and bonuses, but I’ve seldom found myself referencing it only to confirm my interpretation of things, which was, with few exceptions, correct. 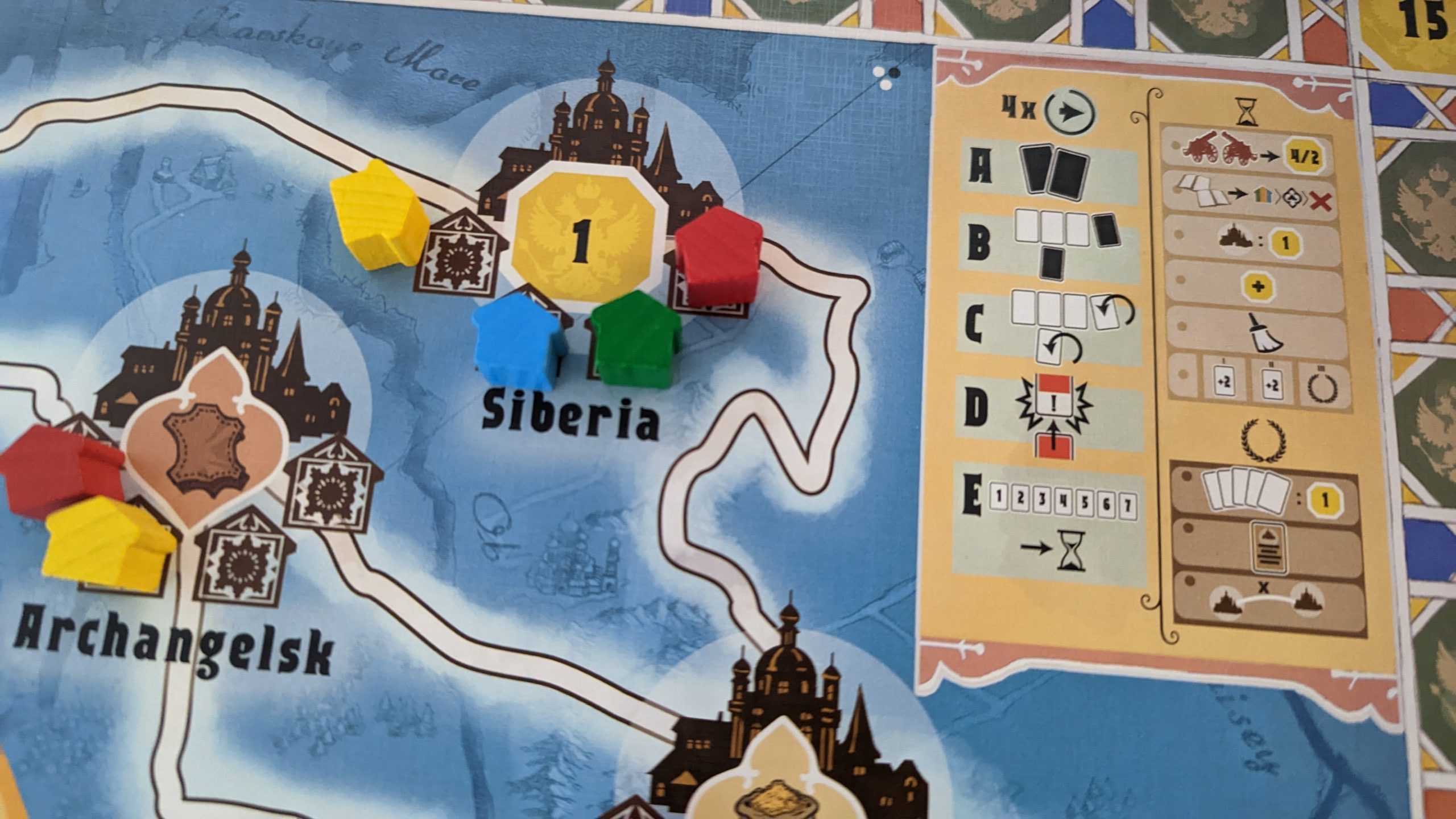 If I had to criticize Catherine for one thing, it would be for its lack of player interaction, which is entirely limited to the end of decade cannon and book comparison, where the only negative consequence for the players on the tail end is missing out on the rewards other players get. You could make this a cooperative game by having players add up their scores at the end to compare to a number in the rulebook and it wouldn’t alter gameplay in any way. I am fully aware that there are people out there that like the style of game where everyone is playing in their own sandbox and you only look up from your own creation at the end to see who made the best castle, but the result is a dry German ja, you made most efficient use of your provided actions to score the most points, followed by a polite golf clap. Not to invalidate their enjoyment, but this is my review, and omitting player interaction means missing out on the real magic of board games – the sneaky thrill of pulling off a risky gambit that goes unpunished, almost like you got away with cheating, or the feeling of genius when your speculative action based entirely on reading an opponent’s play pays off.

Finally, I would be remiss if I didn’t address the problematic theming here, however thin it may be; specifically referring to the uncritical utilization of a colonial power and the inclusion of Ukraine as Russian territory. I’d like to preface this by saying that I’m not looking to berate or demean anyone; instead I mean to stress the continuing point that we need to do better as a community around this hobby. I understand that production and manufacturing is a long and involved process, and that things had probably already been set in motion that would have been hard to change before the full-scale Russian invasion of Ukraine commenced. I also understand that  the game is set in historical imperial Russia, and the use of terminology that has been revitalized by modern Russian propaganda could easily be purely innocent. On the other hand, Putin’s expansionist policies have been well-known for a hot minute, and when using anything in the real world, a publisher is responsible for doing the due diligence to respect how their framing will affect people.

Catherine: The Cities of the Tsarina

Catherine hits that sweet spot where it's straightforward enough to be family weight, but deep enough to be lighter side fare during a hobbyist game night.

Nick grew up reading fantasy novels and board game rules for fun, so he accepted he was a dork at an early age. When he's not busy researching the intricacies of a hobby he'll never pick up, Nick can be caught attempting to either cook an edible meal or befriend local crows.
Related Articles: Catherine: The Cities of the Tsarina, Tabletop
Share
Tweet
Share
Submit