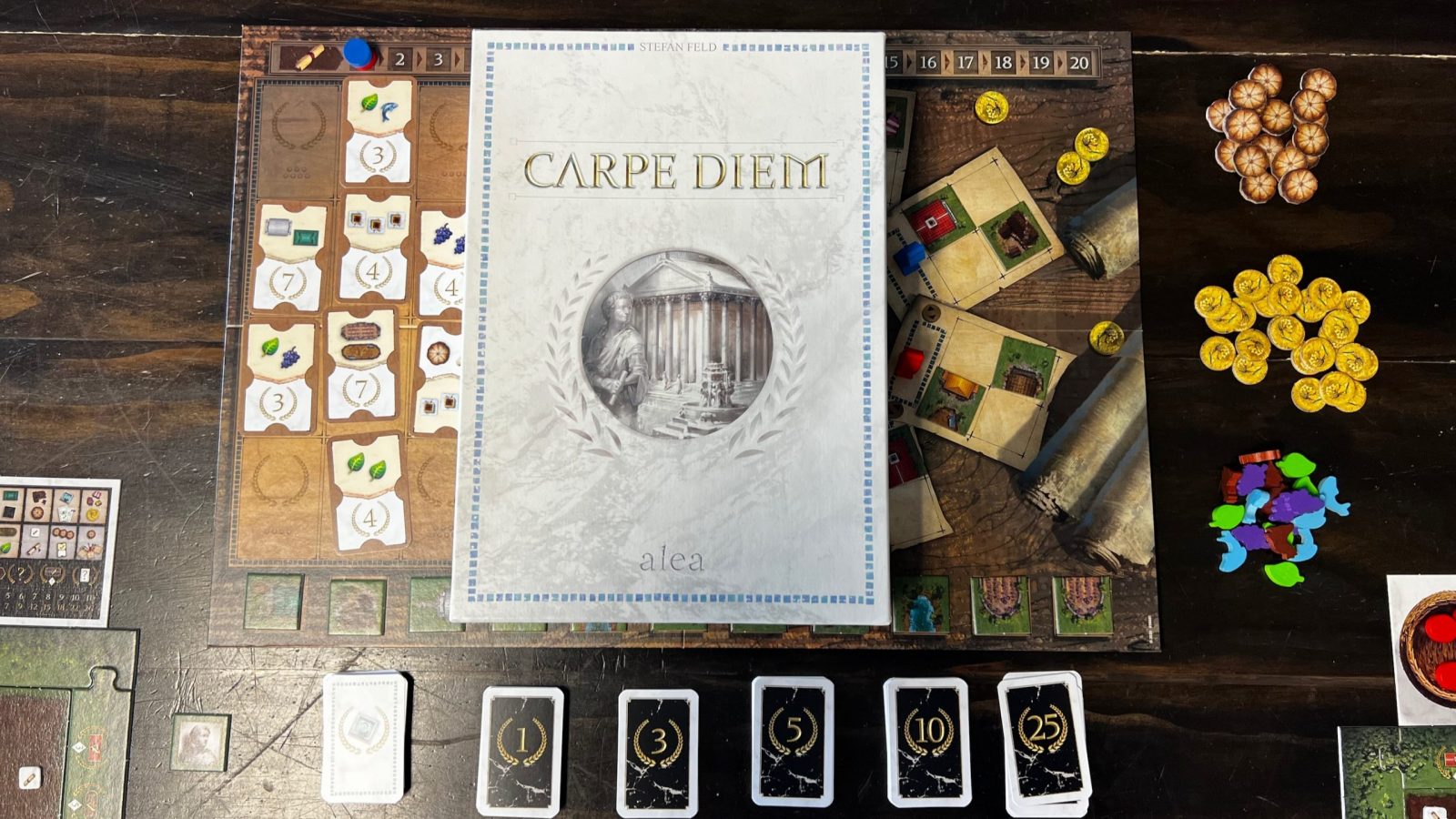 When setting out to play Carpe Diem for the first time, I was prepared for a pleasant experience of tile placement with friends and introducing a Stefan Feld game to some newcomers. What I was not expecting was a rage induced tirade of epic proportions that included many expletives, “are you serious?” outbursts, claims of taking tiles just to mess with players, and a near epic table flip/walk out! Needless to say, this was a great game! 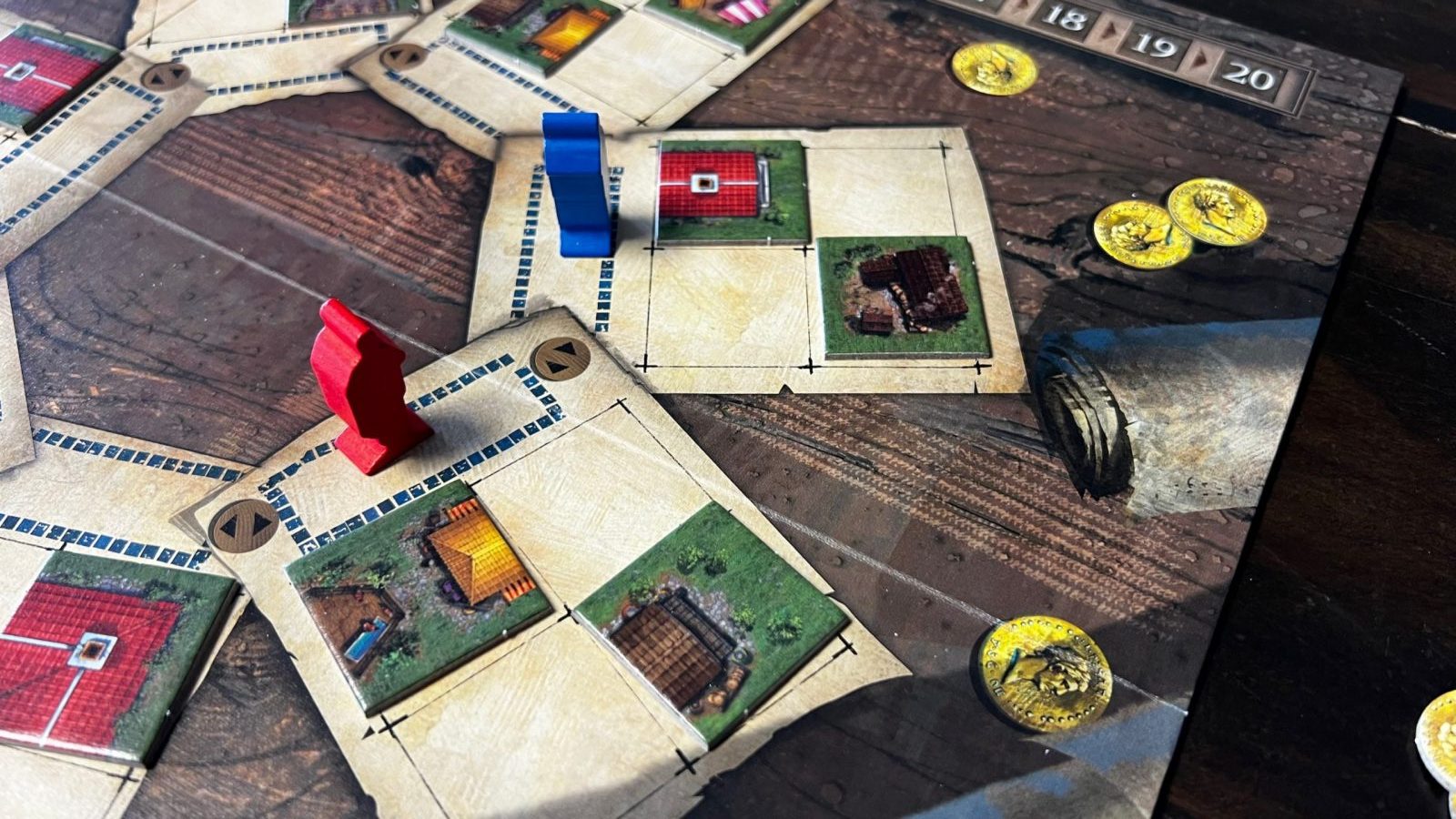 Carpe Diem, first published in 2018 and re-released with updated components and gameplay in 2021, is from designer Stefan Feld and published by alea as part of their big box game series. Carpe Diem is a 2-4 player game in which players take on the roles of patricians, noble families, in ancient Rome tasked with building up and developing a city district and raising your prestige. The game takes place over four eras each with two main phases and some smaller rounds. Each era starts with drafting rounds in which players move their pawn on the board to the left or right one space and take one of the tiles available. The players then have the option of placing the tile on their district board or saving the tile for end game scoring. 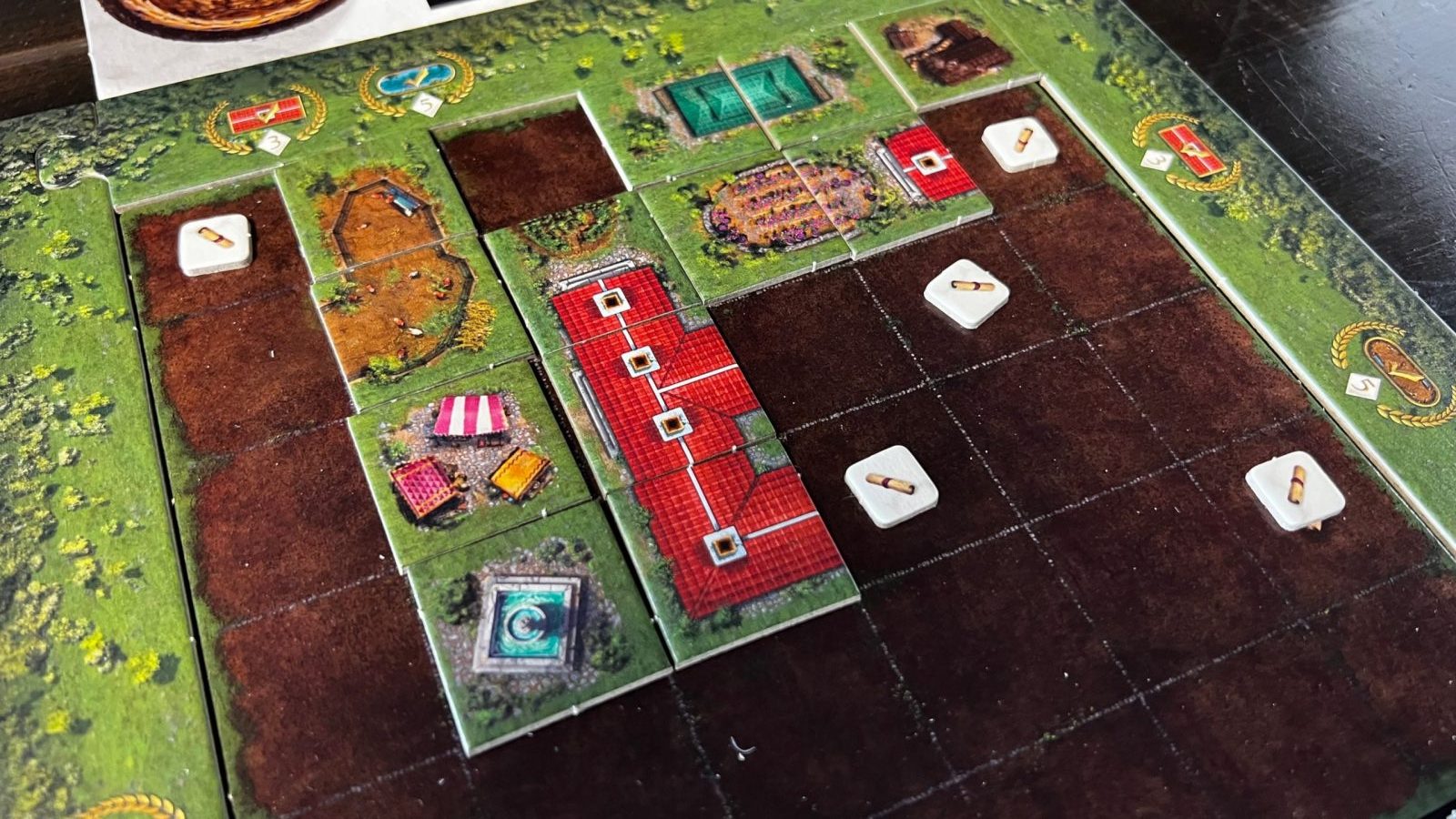 Player district board with examples of tiles.

Tile drafting and placement is where most of the strategy in the game comes into play. Players can earn perks by completing different structures in their district. These perks come in the form of resources that can help fulfill end game scoring goals or can be spent during the second phase of the game. During set up, players are assigned four random frames that border their district. These frames offer unique end-game scoring opportunities for players if the arrows bisect certain buildings on the player’s boards. Each board also comes with small scroll tokens that increase a player’s prestige when covered by a building tile. Fountain tiles give players special end game scoring cards as well. 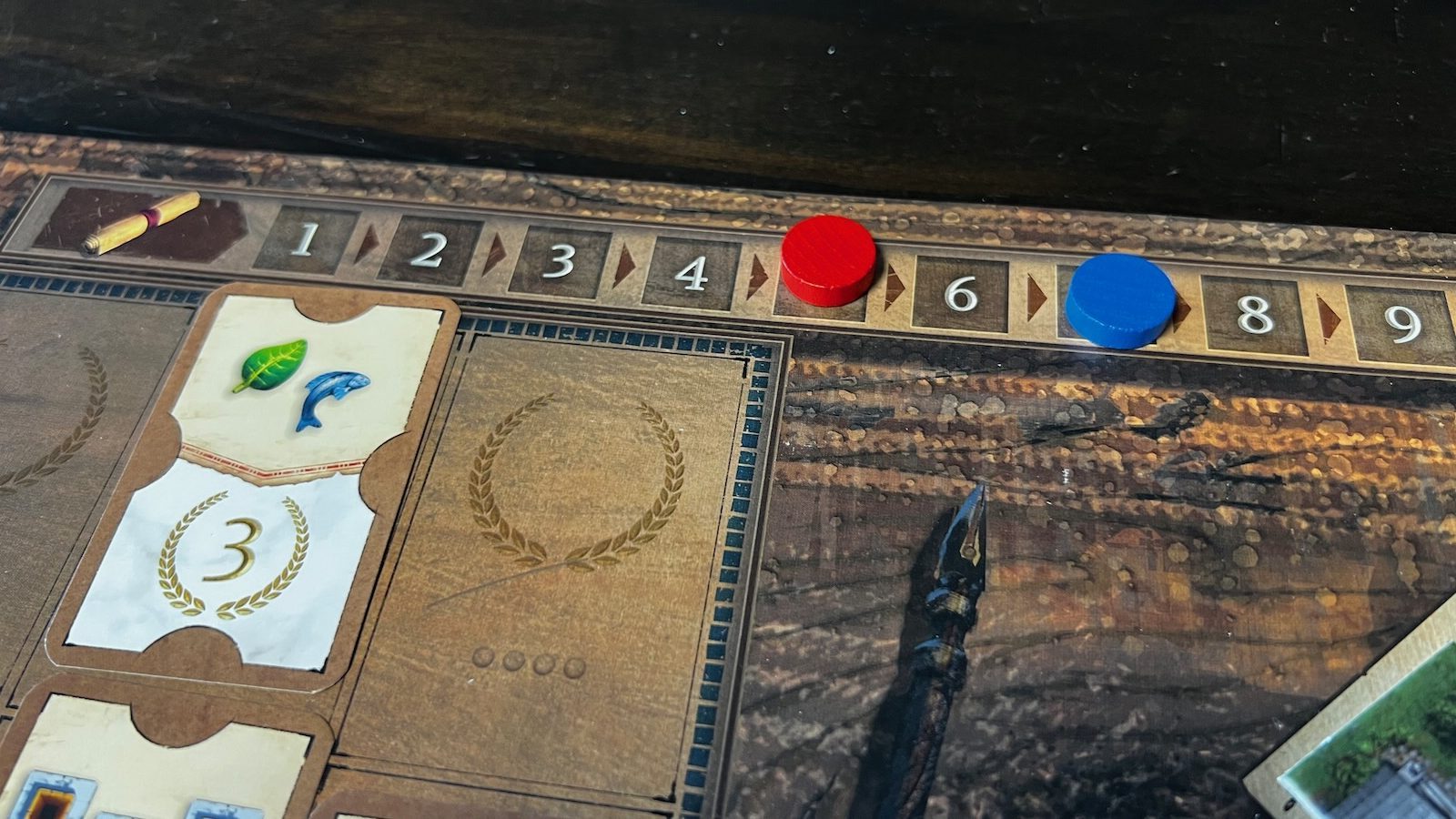 After all tiles have been drafted from the main board, the second phase of the era begins. Beginning with the player with the highest prestige on the track, colored discs are placed between special cards in an always visible public Forum. The player must fulfill the requirements of each card by spending resources or having different combinations of buildings in their districts to score the rewards of the cards or lose victory points by not fulfilling the obligations. End game scoring combines different factors from leftover resources, position on the prestige track, the amount of chimneys on estate buildings in your district, and a variety of other options. 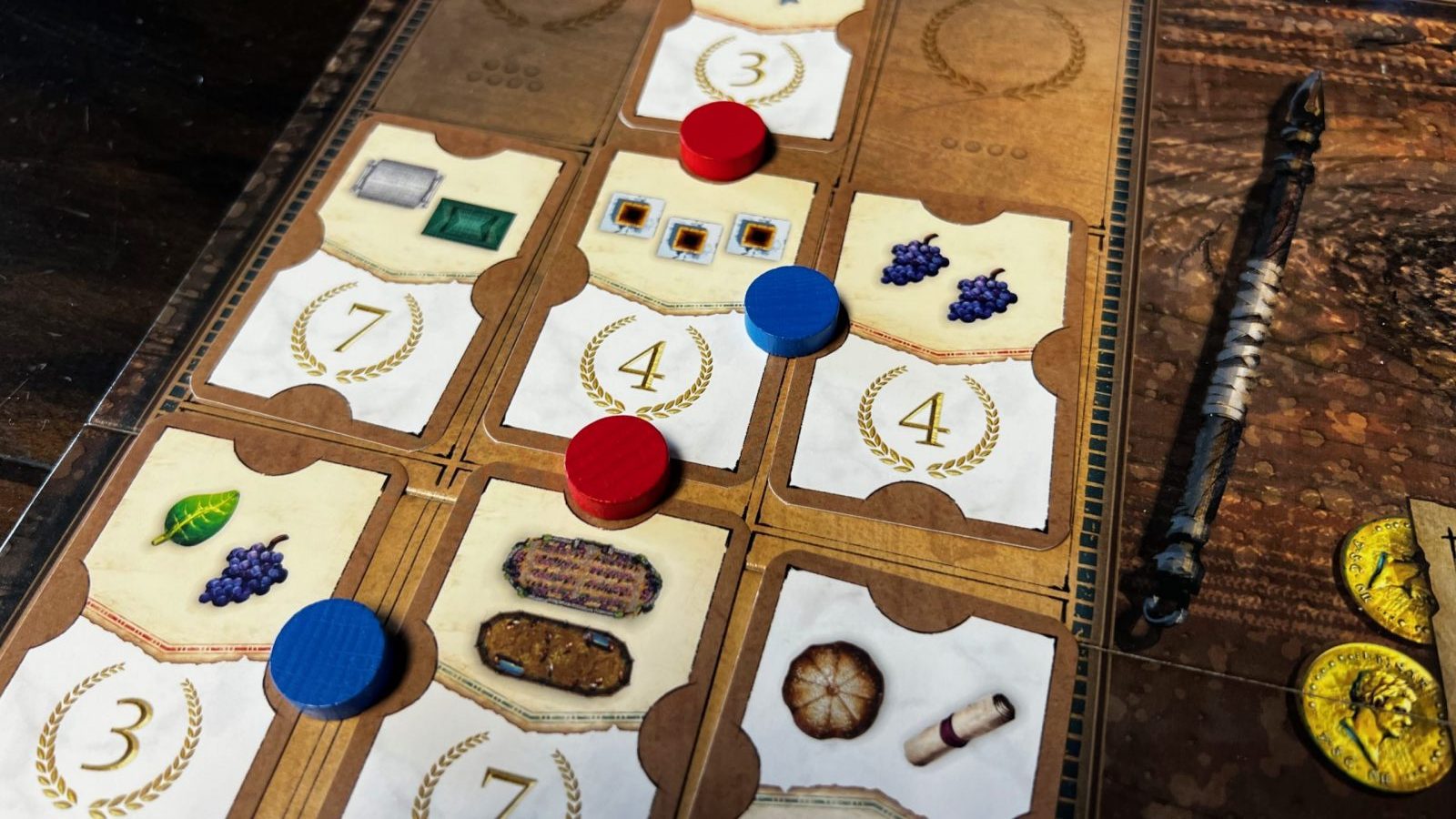 The forum is visited in the second phase of each round.

The components of Carpe Diem are what we have come to expect from many Alea games. The cardboard is thin and flimsy and some of the components are very small. The small cards make it difficult to shuffle and keep in the box. I was also not a big fan of using these small cards to keep track of points. The lack of an organizer leads the players to use the many flimsy bags provided to keep everything in place. The resource pieces are a lot of fun. The grape and fish tokens are especially vibrant and playful. The only problem is that there were not enough provided. In multiple playthroughs, we ran out of resource tokens and had to keep mental track of which person had what resources. The updated version fixes some issues with the previous version such as distinguishing different tiles used in different rounds, an updated track system for the drafting phase, and updated artwork on tiles and the main game board. That being said, the artwork is a little dull compared to other games on the market today. 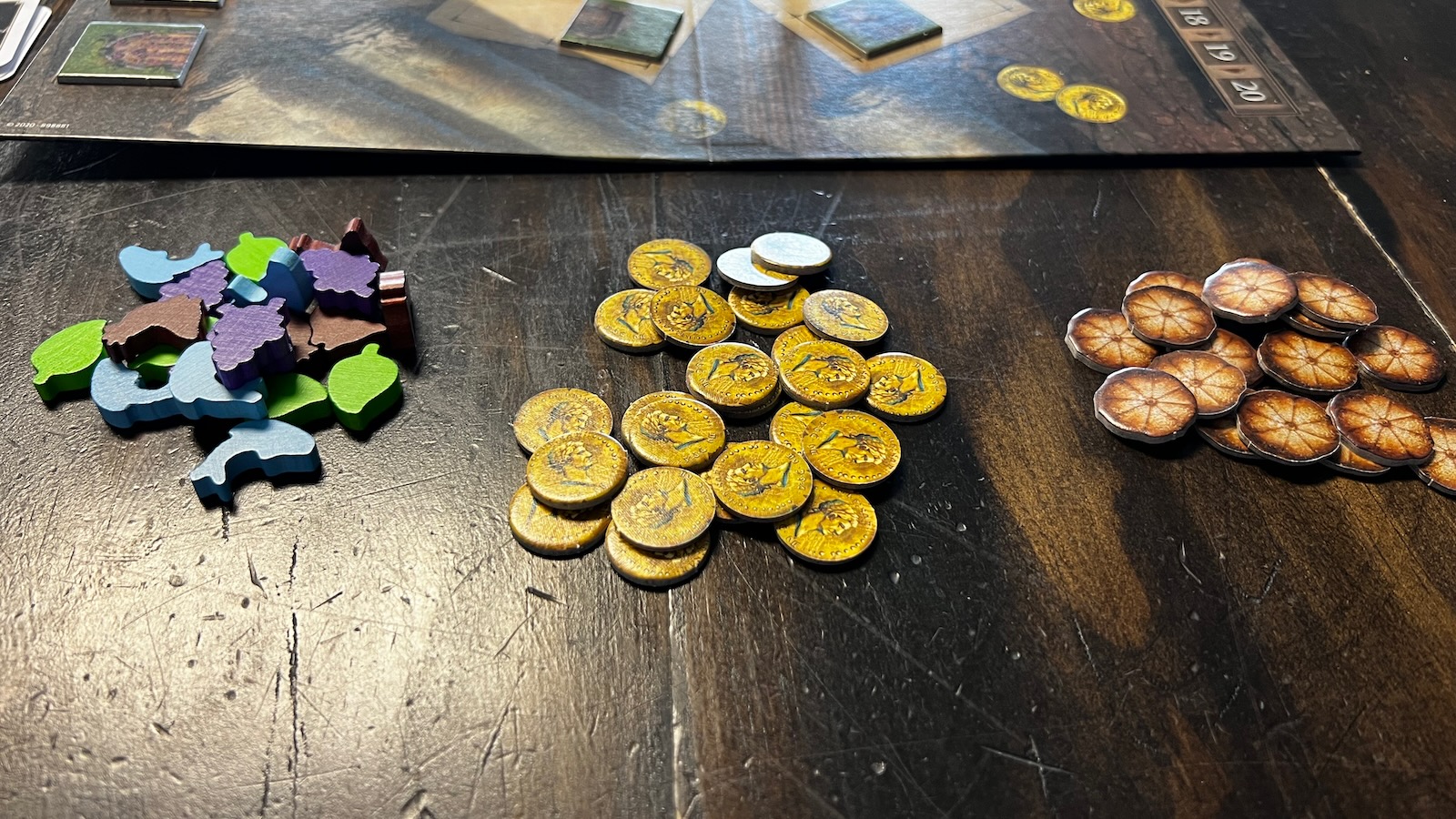 The gameplay, on the other hand, makes up for what the components and artwork lacks. The mechanics of the game are simple: draft tiles, place tiles, gain resources, score points. The strategy, however, is deep and meaty. Players must balance where their pawn ends up each turn to set up their next tile draft. The placement of the tiles balances getting resources early and pushing your luck for more end game points down the line. Playing the reputation track gets important towards the end of the game and choices in the market get slimmer each round. No matter what your strategy is, you have to be willing to pivot to other player choices and what is available on your turn. Trying to pick a tile that you know your buddy wants to fuel his childlike ragefit comes into play as well! 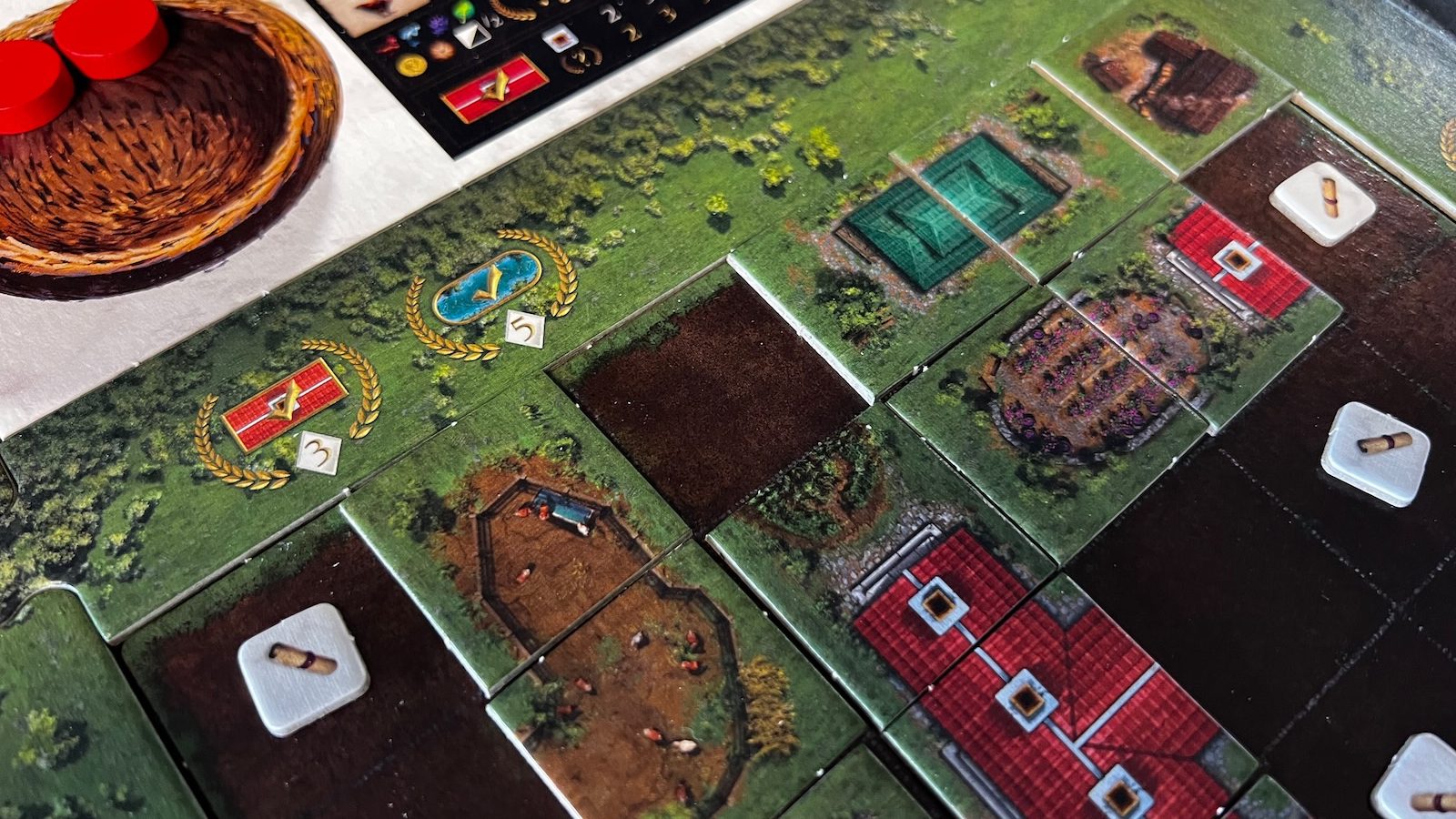 Close up on end game scoring on the district borders.

Aside from being available in five languages, the rulebook reads well and provides a sidebar on each page for quick reference during the game. The game scales well to different player counts. The market and the amount of tiles placed each round are scaled to the players in the game. The amount of market cards provided allows for a lot of variability from game to game as well. Even if you see a card again, the position of the card in the market changes the overall strategy due to the card it is adjacent to. The randomness of the district borders also gives some great variety each game. Compared to other Feld games like Castles of Burgundy and Bonfire, the fact that the game is relatively easy to set-up and playtime is around an hour for players who know the game give it another reason to get the game to the table.

Even though the art and components are lacking, the amount of strategy you get in the playtime of this game make it a great tile laying game and a great entry from Stefan Feld.