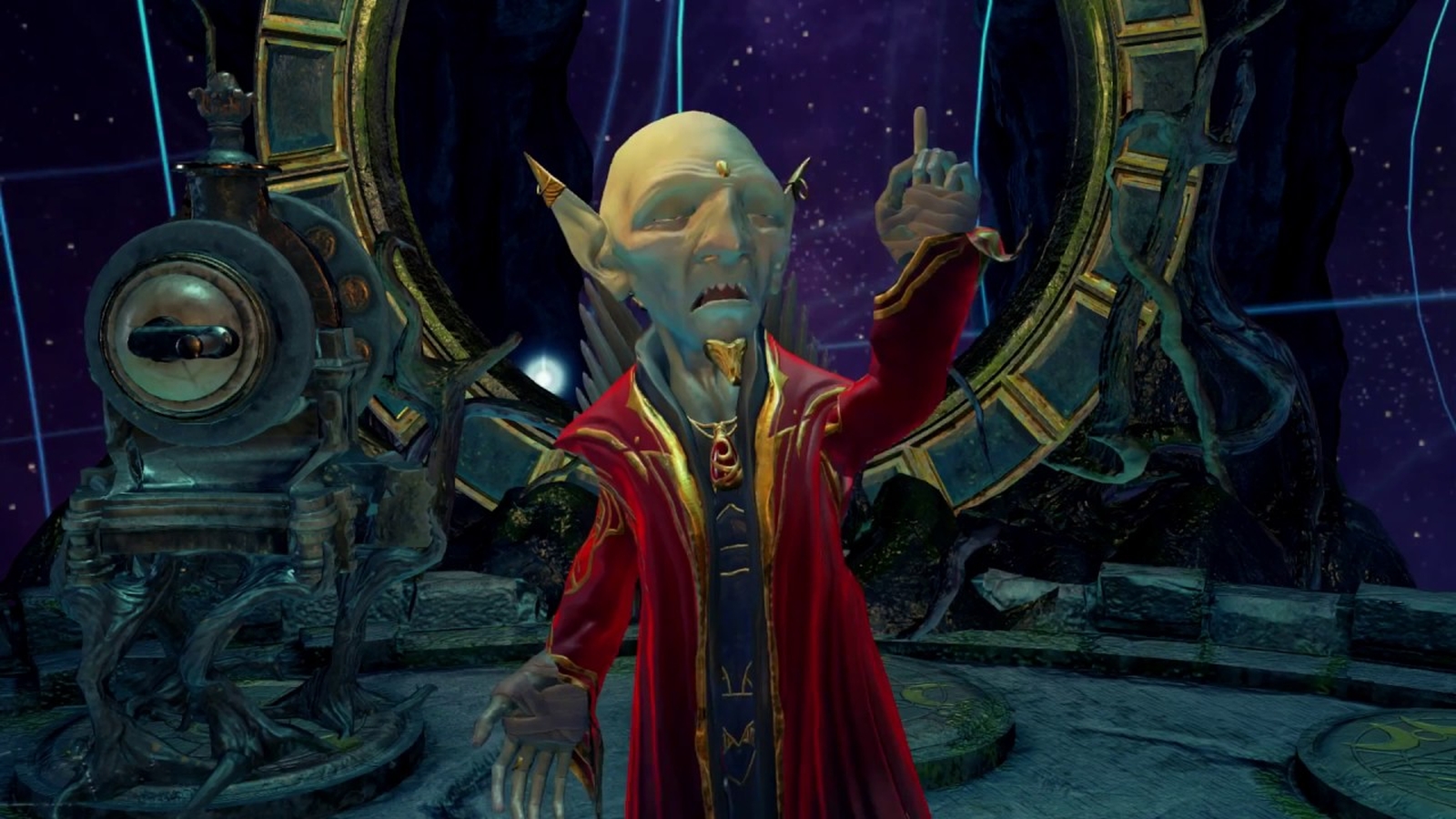 When I was debating which VR rig I wanted to buy, there was one game, exclusive to the Oculus Rift, that kept coming up — The Mage’s Tale. The game scratched the itch of being a powerful wizard, looked fantastic, and almost compelled me to buy Facebook’s VR HMD. I ended up picking up the HTC Vive for a myriad of reasons, but that didn’t stop me from thinking about Mage’s Tale. Sure, I could have used ReVive to check it out, but I wanted to wait for it to come to the platform officially. That day has come. It is time to don my robe and hat and see if my patience would be rewarded.

The developer behind The Mage’s Tale is inXile Entertainment, the team behind games including The Bard’s Tale (review), Torment: Tides of Numenera (review), Wasteland 2 (review), and the upcoming adventure title, The Bard’s Tale IV. To say that they understand what makes an RPG great would be an understatement.

In The Mage’s Tale, an evil wizard named Gaufroi has kidnapped your mentor and master, the mage Alguin. Naturally, you aren’t having any of that, so with the help of some fellow mages, and Alguin’s smartass goblin sidekick, Crux, you’ll blast your way through Gaufroi’s minions, solve puzzles, disarm traps, and collect loot in your quest to rescue him.

The Mage’s Tale sounds a little like The Bard’s Tale, and that’s not on accident. The game is meant to be a mix of comedy, combat, and exploration right from the start. Eating mushrooms triggers a Hendricks-esque guitar riff, Crux is perpetually smarmy with his explanations and personal jibes, and there’s enough combat to keep you plenty busy between puzzles. He is your omnipresent comedy relief, a nuisance who over-explains puzzles before you even get the lay of the land, and well voiced, even if you want to kill him by the end of the game.

Graphically, the game is pretty solid. Sure, it’s been a year since launch on Oculus Rift, but the game has aged nicely thanks to its stylized art direction. The game’s sense of scale is fantastic, and levels have a great deal of verticality on many occasions. It is clear that inXile wanted to craft their signature RPG action in the virtual space, and in terms of presentation, they were quite successful.

In terms of movement mechanics, The Mage’s Tale embraces both schools of thought, possessing both teleportation mechanics, as well as a smooth motion like we’ve seen in more recent titles like Fallout 4. These options provide a vehicle for play, whether you can handle direct motion or not. In a departure from most VR games, however, there is a semi-lock-on mechanic for aiming. Once you’ve selected a spell, simply looking intently at the target (be it a goblin, archers, other mages, hammer-wielding giants, or skeletons, as an example), a small triangle will bracket the creature, helping you target them. You’ll still need to aim, but it does keep them highly visible.

The game is pretty great looking in motion as well.

Through exploration, solving puzzles, and beating baddies, you’ll collect Mage Stones. These arcane orbs serve as the vehicle to advance your magical powers. Collect enough of them and you’ll ascend to the next level, providing the player with a choice on how they’d like to advance. For instance, your first choice is +2 to health or 20% magical recharge rate. Later, you’ll recover spell components that will allow you to craft gems, allowing you to cast new spells, such as fire, lightning, an arcane shield, wind, and ice.

Without your master to help you learn, spellcrafting is done by trial and error. Popping open chests yields some oddity that you’ll send back to your tower. How, you might ask? Well, that job falls to a magical frog who teleports in behind you, floating on a pillow (of course), waiting for you to throw it into his mouth. It’s odd, but in a world made by inXile, it fits right in. There are dozens upon dozens of magical reagents, so you’ll see this little frog frequently.

Slinging spells is just the start of the fun

Spells often have multiple uses. For example, the Lightning spell will zap a single target, but when charged, packs a greater punch and arcs between foes, and can energize nodes. Fire can be used to, well, set creatures on fire, but can also be used to melt items that have been frozen. As you find reagents and build on the base spells the game provides, you’ll likely need to mix and match to tackle the tougher foes later in the game. Once you unlock “Guide”, you can craft spells that allow you to create a fireball that you can then control in mid air to go around a shield or hit casters hiding in the back ranks. It requires a bit of digging to find all of the cool combinations, so break walls, find hidden boxes, and look under every rock. Otherwise, how are you going to create a ice arrow that bounces off the walls and spews confetti?

As you won’t be using a sword and shield, spellcrafting is vital to success. I was sad to see that you cannot dual-wield spells, so don’t expect two-handed lightning, or lobbing fireballs from both hands. Still, the spells have a satisfying crackle, pop, and boom, as appropriate. There are issues with the voicework, however, as it’ll tend to step over itself, telling you to do something you’ve already done. It’s not a deal breaker by any means, but it can be annoying.

The game clocks in at about 8 hours, which is pretty solid for a VR title. Collecting all of the goodies you could find in the dungeon would probably take double that amount of time. Best of all, it feels like a very complete game instead of a VR tech demo.

One of the issues the game had on launch was extremely long loading times. As my game is running on an m.2 SSD, and I have more than twice the recommended RAM, I was happy to see that these level loading sequences are thankfully reduced, though those on mechanical drives might get to enjoy the wonderful Gaelic-inspired singing more than they might like.

The Mage’s Tale doesn’t take a lot of risks in terms of storyline. It’s fairly formulaic, though it nicely serves its use to set up the fantasy of being a powerful wizard. As a result, the magic is the star of the show, and that’s putting the emphasis exactly where it should be. While it won’t win any awards, it does keep you entertained, and the pacing ensures a nice even build of power.

If I had one big complaint about The Mage’s Tale, it’s that it wasn’t well adapted to the Vive’s control methods. Grabbing things is accomplished by fumbling with getting the right hand position pointing at the object, then clicking a side button to “summon” it to you. In a world where every other game allows me to simply reach out and grab objects, this feels like a painful oversight. With almost nine months of time between the launch on the Rift and this move to the Vive, it seems the team did little to customize the control scheme to take advantage of the platform. Frequently I found myself reaching out to grab something, furiously clicking, only to remember this counter intuitive mechanism. As a result, The Mage’s Tale feels very much like a square peg in a round hole in terms of control.

With high production values, solid voicework, and impressive scale, The Mage’s Tale was every bit worth the wait. While the controls are certainly obtuse for the platform, the fun storyline, puzzles, and spellcrafting makes it a fun addition to the Vive library.

Ron Burke is the Editor in Chief for Gaming Trend. Currently living in Fort Worth, Texas, Ron is an old-school gamer who enjoys CRPGs, action/adventure, platformers, music games, and has recently gotten into tabletop gaming. Ron is also a fourth degree black belt, with a Master's rank in Matsumura Seito Shōrin-ryū, Moo Duk Kwan Tang Soo Do, Universal Tang Soo Do Alliance, and International Tang Soo Do Federation. He also holds ranks in several other styles in his search to be a well-rounded fighter. Ron has been married to Gaming Trend Editor, Laura Burke, for 21 years. They have three dogs - Pazuzu (Irish Terrier), Atë, and Calliope (both Australian Kelpie/Pit Bull mixes).
Related Articles: The Mage's Tale, VR
Share
Tweet
Share
Submit