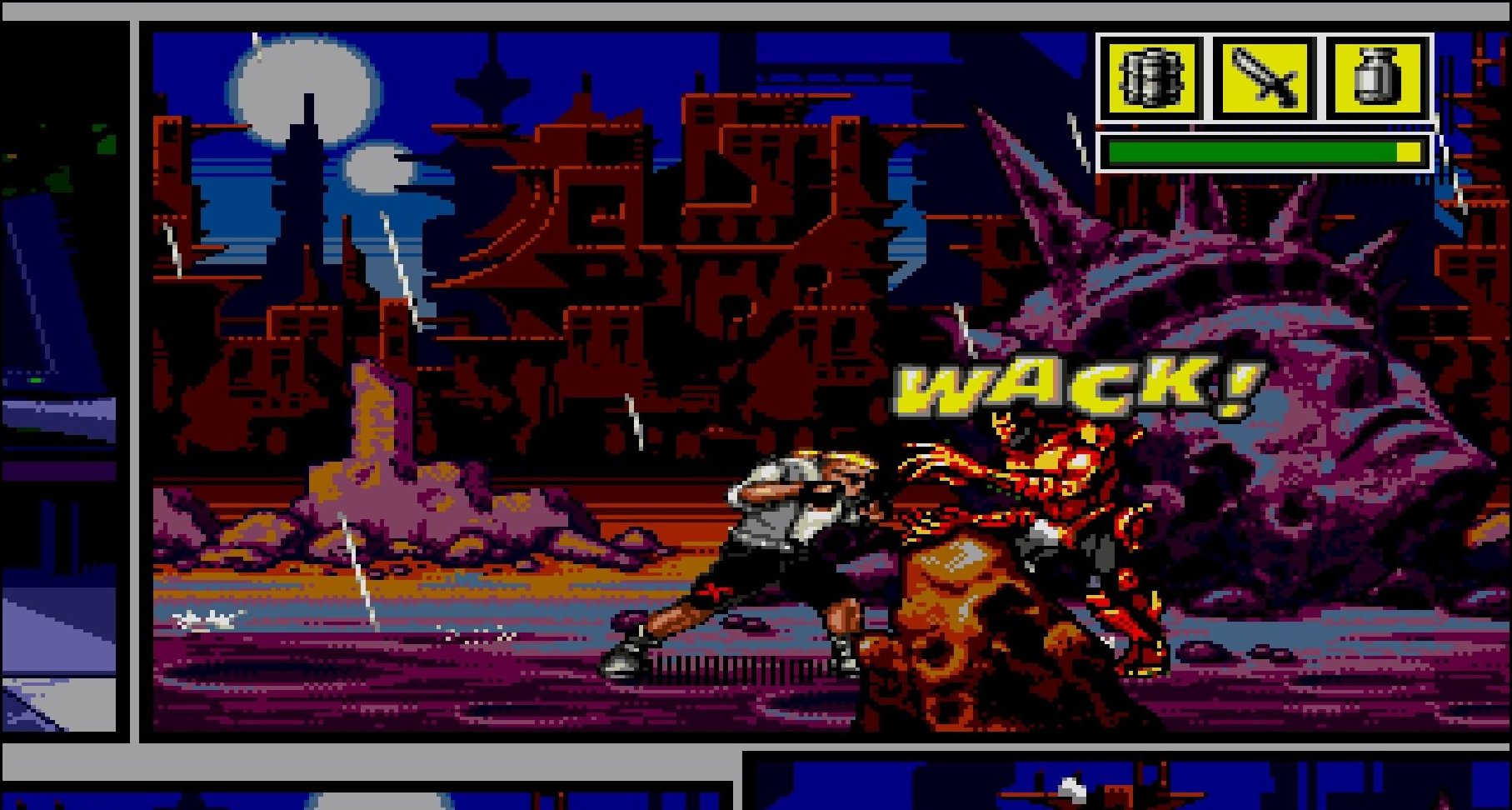 Over the years games have evolved and become something of an art form. With the beautifully crafted adventures that we have now, it’s important to take a look back at what helped influence them. Sega Genesis Classics provides 50 games that allow you to do just that.

Sega Genesis Classics comes at you hard with nostalgia in the form of its main menu: a bedroom. You have an old box TV straight ahead, along with the Sega Genesis underneath. All of the games are set up in alphabetical order on a bookshelf on the right, which you actually sift through in order to pick what game you want to play. For some of your favorites, you can hit a button and separate them into their own section at the beginning of the rows. To add to the atmosphere, there’s also a clock, posters of some of the games, a desk with a trophy, and more.

The Sega Genesis in the room is where you change settings that affect every game. For example, if you don’t want to stick with the original graphics, there are several options to update them or make them clearer. I personally preferred to stick with the default graphics in order to get the full original experience. I never had any graphical issues, so there was never a desire to change them. Other visual settings you could change include a fullscreen option, which can evoke some nostalgic memories of those big CRT television sets.

There are three main ways to play: you can play off of the TV in the menu room, make it fullscreen with borders on each side, or opt for the stretched fullscreen. Playing off of the TV creates the illusion of being up close to an old TV like in the old days, which was an interesting touch. Fullscreen with borders has the games take up the amount of space they typically would in their original state, while the extra spaces on each side are filled with designs. You can choose from a preset collection including a circuit board, Sonic’s checkered pattern, stripes, and more. If you don’t like the looks of those borders, then stretched fullscreen is your best bet. It reduces the nostalgic feel a bit because the screen is extended further than originally intended, but that doesn’t hurt any of the games. In fact, it became my favorite way to play every game, although I would go back to regular fullscreen in order to get that nostalgic size once again.

The collection of games is large and wonderful, having a variety of genres and playstyles available. Many players may find games from their childhood along with games they never had a chance to play. I experienced this myself, and got overjoyed at seeing a game I had long forgotten about: Comix Zone. Comix Zone revolves around Sketch Turner, who is working on a comic one night when lightning strikes his book and brings the villain of the story to life. The villain is unable to manifest in the real world, so he pulls Sketch into the comic in order to kill him and steal his body. This leads to Sketch making his way through the pages of the comic as he attempts to escape. The comic aspect is a part of the gameplay because enemies are drawn in, stage transitions are done by hopping to the next panel, and Sketch can rip parts of the pages off to create paper airplanes. There are even a few branching paths, but they lead to the same place in the end. Comix Zone ran just like it did when I was a kid, and it was just as difficult. It can be tough, but it’s definitely worth a look if you’re interested in its unique concept.

Of course, there are also the big name games such as Sonic the Hedgehog, Sonic 3D Blast, and Sonic Spinball. You can’t have a Sega collection without Sonic; that’s like having a Nintendo collection without Mario. Sonic Spinball was an interesting outing for our speedy blue friend because it makes him the ball in a giant game of pinball. You’ll be operating the flippers to bounce Sonic around in order to open new paths, hit switches, and rack up the points. As with regular Sonic games, you’ll be attempting to collect chaos emeralds, but in this case it will take hitting switches, traveling around the pinball table stages, and some good timing. Some of the paths lead to other pinball tables that are all connected, which is a really neat idea. Along with the flippers, you’ll also need to control Sonic in certain situations. These include hopping up to the flippers after he catches himself on a platform at the bottom of the table and some higher up sections that require a tiny bit of platforming. This is an amazing mashup of two genres, especially during the game’s original release.

Going on to some potentially lesser known games, we have Beyond Oasis and Landstalker. They are both early examples of adventure games in 3D worlds. Beyond Oasis focuses on Prince Ali finding the Golden Armlet and being tasked with finding four spirits and then taking down the wielder of the Silver Armlet. Landstalker involves Niel going on a quest to find and obtain King Nole’s treasure with the help of a fairy named Friday. The controls function just like how you’d expect from old school games, although Landstalker is still a little rough. I felt like I needed to use the analog stick to guide my character easier because he only walks diagonally wherever he goes. Using the D-pad becomes finicky, as sometimes down means down to the left, and other times it means down to the right. Other than that, both games look good, all things considered, and they each provide their own interesting challenges.

Two really charming games in this collection are Kid Chameleon and Flicky. In Kid Chameleon, the boss of a new VR game begins abducting players, and a new player named Casey goes in to save them. A big part of the game is breaking blocks to find masks that transform Casey into different characters. Each form fights differently and has their own special ability. For example, the knight-type form allows you to climb walls, the hockey mask gives you cleavers to throw, and the samurai lets you use a sword. After a few hits, Casey goes back to normal and can only jump on enemies to kill them. These forms are extremely helpful and are a lot of fun to use. I’d heard about Kid Chameleon before and am glad I have gotten to experience it firsthand.

Flicky is dramatically different than many of the other games in the collection, and it provides a fresh palette cleanser of sorts. Flicky boils down to collecting every chick in a stage and getting them to the exit doors while avoiding tigers. Gameplay involves only running, jumping, and occasionally shooting objects at the tigers. Each stage has objects scattered around that can be fired at the tigers to beat them. After a short time, they will respawn from cages in the stage. Flicky is a cute, charming game that I honestly had a hard time putting down, which is a good sign for something this old and simplistic. My only issue with it is that you fire whatever object you’re holding as soon as you jump. You can’t save objects for when you need them unless you never jump, which it’s impossible to beat a stage without doing some platforming.

Now, some amazing additions to the games in this collection are trophies you can earn, challenges you can complete, leaderboards, save slots for each game, and online multiplayer. These aspects add replayability as you have more goals to reach and other players to share the experience with. The save slots are incredibly appreciated as they help reduce the chances of having to start games over from the beginning. Being able to save whenever you wish and load from those points in these classic games makes them infinitely more approachable. The games are more than enough on their own, but these extra aspects just give you more to enjoy. With 50 games of varying difficulty, design, and gameplay, you’ll easily have hours of gaming ahead of you as you attempt to complete them all and experience some truly great classics.

Sega Genesis Classics boasts an amazing collection of 50 games, all of which will keep you busy and entertained for hours. Some of the games can be challenging to a fault, but that's just the way some old school games were made. The games hold true to their original forms and bring you a cartridge full of nostalgia that you can pop right into the console of your heart.

Codi loves to play video games and watch movies. He will watch almost any kind of movie just to experience them. His ideas take inspiration from the shows and movies he watches, and games he plays. He also loves a good pun.
Related Articles: Sega Genesis Classics
Share
Tweet
Share
Submit