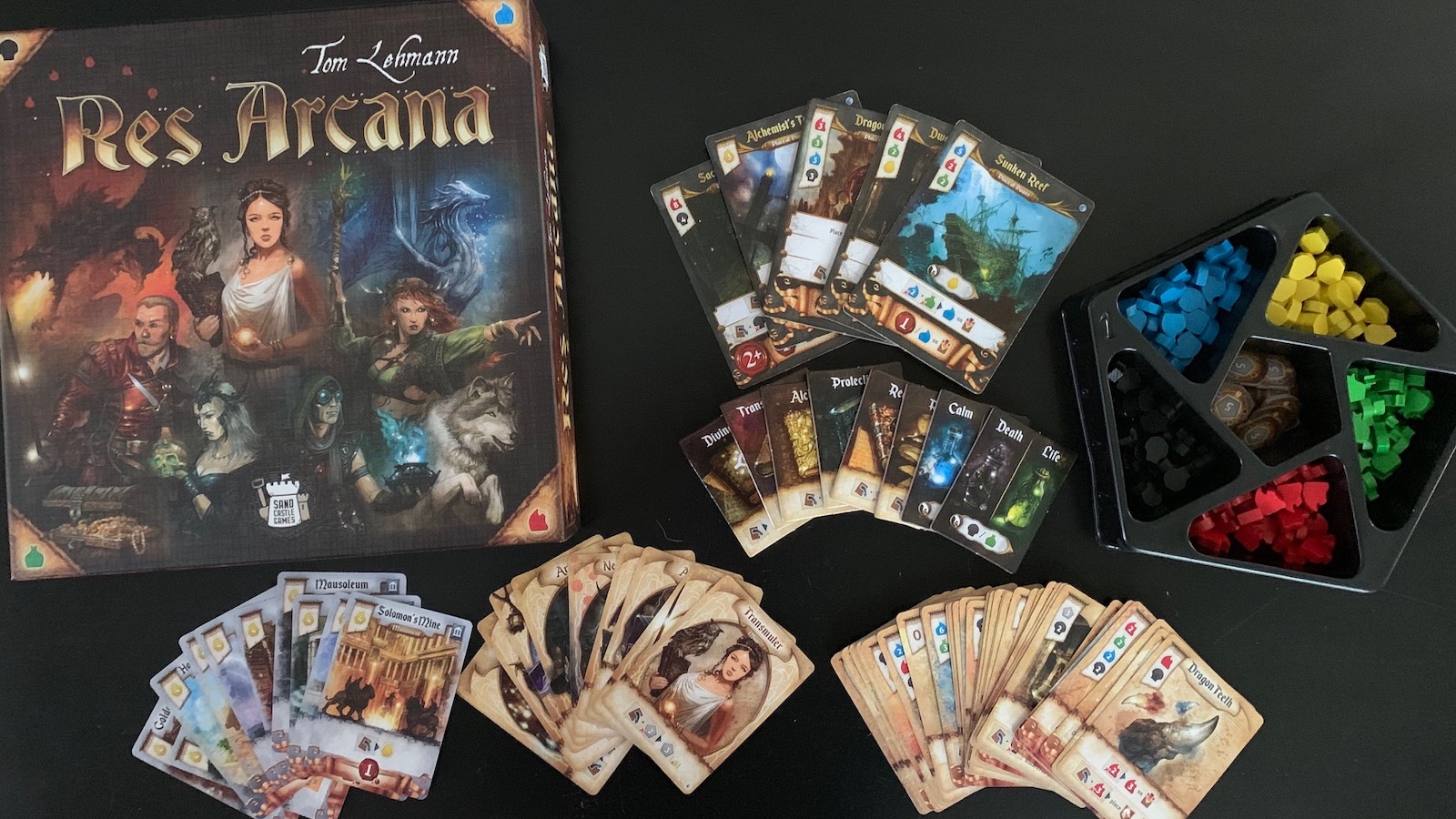 As a lover of big complex games, I sometimes need to realize that not everyone is down with the concentration it takes to learn a really complex game like Lisboa, or with the time commitment of a game like Twilight Imperium. Sometimes people want a quick game that’s easy to learn, and I respect that position, but I still want some depth and strategy. Tom Lehmann and Sand Castle Games seem to have heard my plea, and created Res Arcana.

Res Arcana is a 2-4 player Engine Builder game where you and 1-3 other players assume the roles of various Alchemical Mages trying to best use their talents, 8 artifact cards, and communal magical items to control ancient monuments and places of power. The Mage who uses these best will gain the most victory points and win. 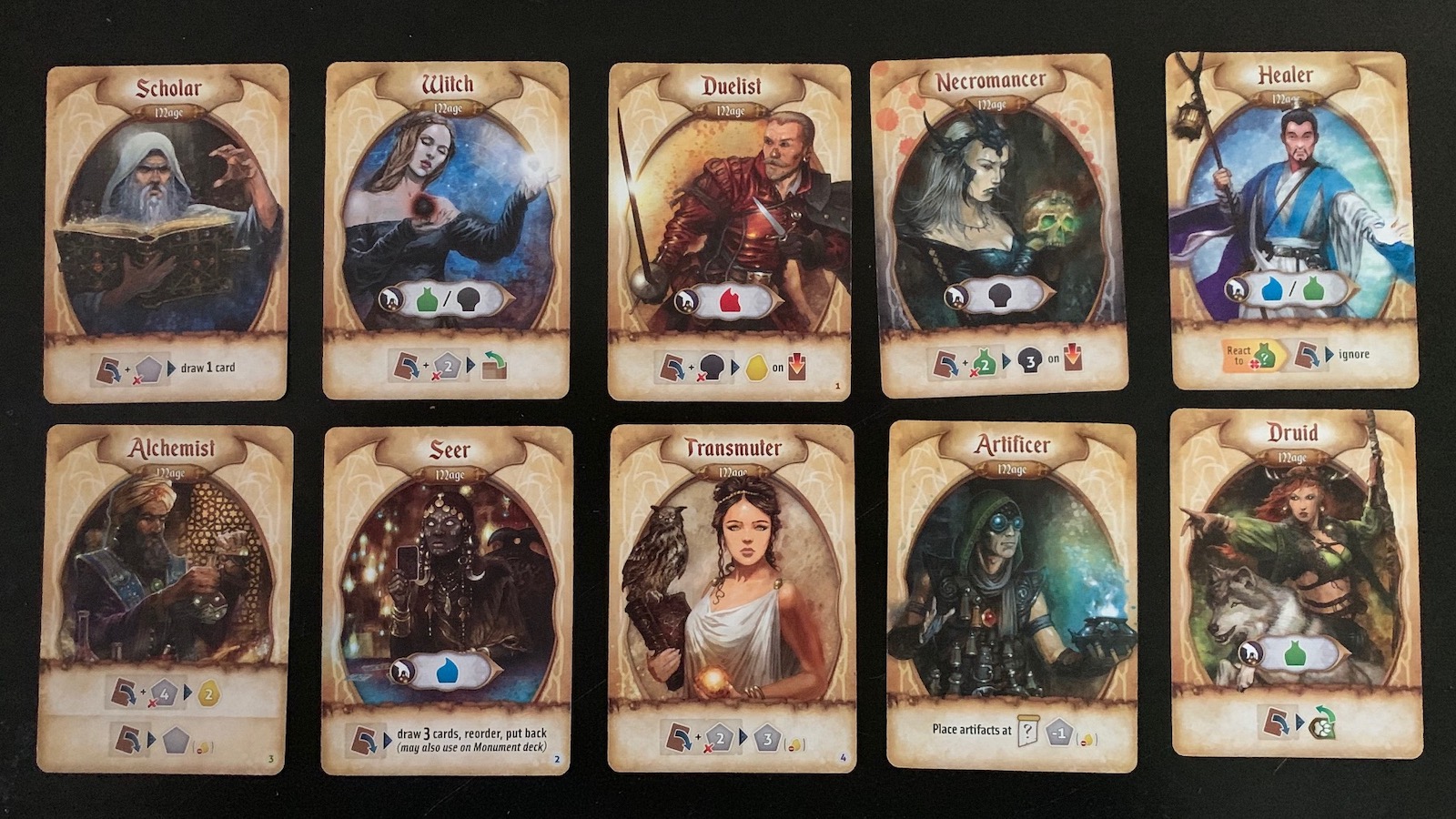 To understand this game best, it’s important to make a distinction between a Deck Builder and an Engine Builder. In a Deck builder, part of your action every turn involves acquiring new cards to make your future turns stronger. While many engine builders also give you new cards every so often, in Res Arcana, you start and finish the game with 8 artifact cards. You will use them to make your actions more and more powerful, but you will not be acquiring any more, so you have to really think about how you use them. The good news is that there is a card drafting mechanic at the beginning of the game. In it, you are dealt 4 cards, choose one, and pass the rest on. You repeat this until all cards are chosen, and then do this one more time with 4 new cards passing in the opposite direction as the first time. This is your opportunity to choose cards that work particularly well together, and with your given Mage powers.

Once you’ve chosen your Mage from the two dealt to you, and the drafting of the artifact cards, players pick a magic item for the round, starting with the last player, and collect the “essences” from these components that the cards generate. The magic items are 8 small tiles that offer low level powers that help you achieve your goals in the round. These are free to take every round, and are returned at the end when a player passes. The essences are five different little wooden tokens that work as the currency in the game. These represent the different elements the Mages control, and use to get their artifacts, monuments, and places of power in front of them to make their moves increasingly potent. These essences are Life, Death, Gold, Elan, and Calm. Elan and Calm pretty much look like fire and water, and I’ll be referring to them as such as you’ll find it difficult to get anyone to call them anything but. I’ve heard other people call them “red” and “blue”, but never Elan and Calm. Each player starts with one of each essence. Every place of power, monument, and artifact has a scroll in the top left corner showing the essence cost to add these to the player’s engine. They will in turn help the player gain more essences quicker to purchase more powerful artifacts and places of power. 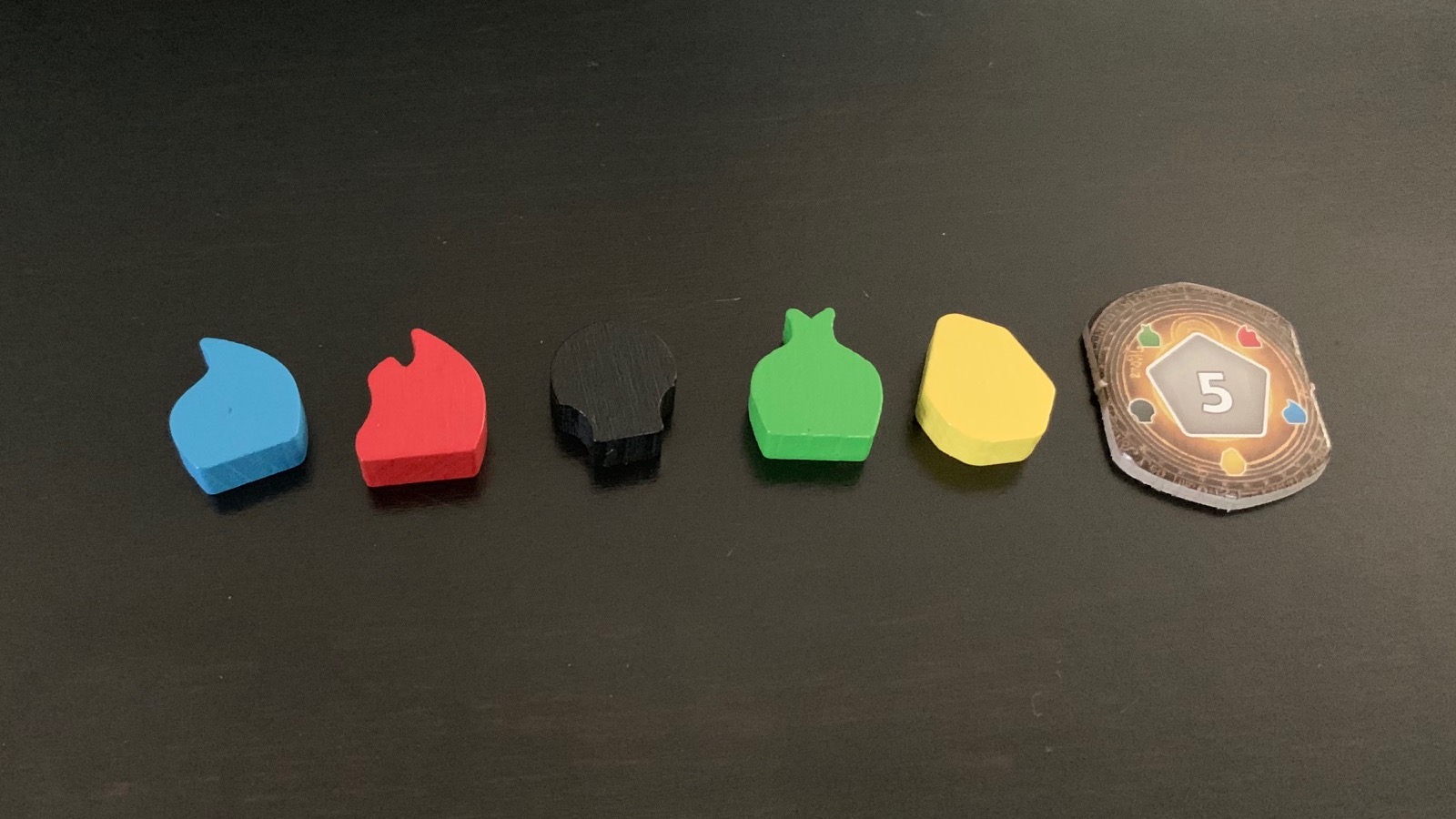 Every round, players take turns taking one action each until they have all decided to pass. They begin with collecting the essences their current components allow them to, then the five actions they can choose from are taken one at a time. Players can take the same action multiple times per round. The actions available are placing an artifact from their hand by paying its cost in the top left corner, claiming a monument or place of power similarly by paying the cost, discarding an artifact from their hand to gain one gold, or two of any other essence, use a power on an un-exhausted component they control, or pass, draw a new card, and exchange their magic item.

Claiming items and other cards is pretty straight forward, you simply pay the essences to put the component in front of you, but the powers on them vary greatly. A reference card for the icons that show up to explain these powers is provided, and new players will need them for sure, as a couple get a little confusing. These icons may allow a player to exhaust a card, tipping it 90 degrees to show that this power has been used. Once this has been done, that card cannot be used again unless another card has the ability to turn this upright again, readying it for future use. Other cards may simply earn the player essences, make essences multiply, or just change their type. Components sometimes make you place your earned essences directly on the card that earned them. When this happens, the player can’t claim them to use until the collect phase of the next round. The player may choose to take them all then, but should be careful as some of these award Victory Points for specific essences left on it. 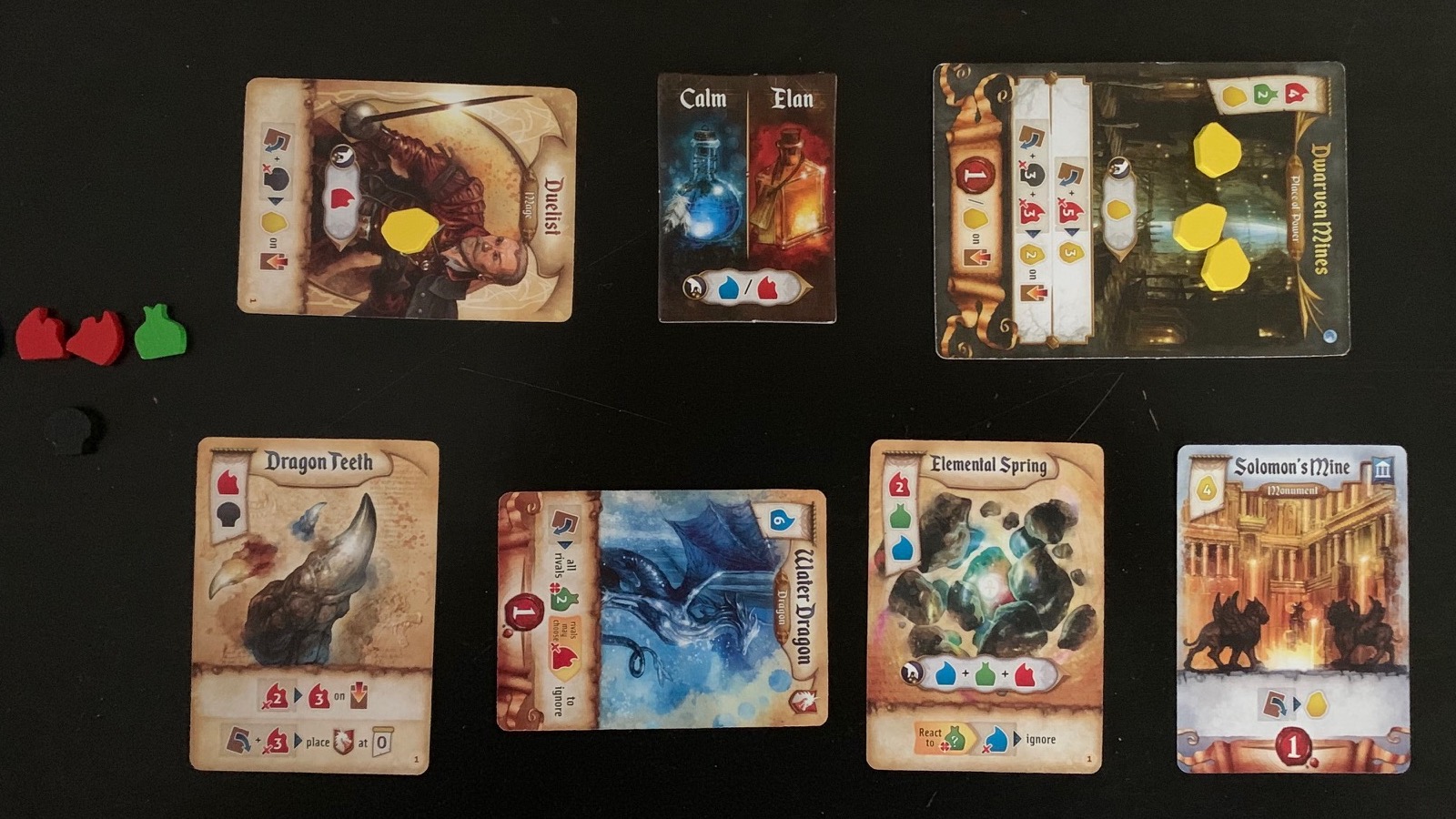 There isn’t a lot of direct player interaction in Res Arcana, but some cards allow for a players to attack one another. When they do, the others lose a few life essences if they have them, or even more of the other essences if they don’t. Some components are chosen with just the ability to block such attacks, but can end up useless if no one chooses this offensive move. The attacking cards will often have an action that the rival players can take to ignore the attack such as discarding cards, or losing specific essences.

Once a player has taken all the actions they choose to for the round, they pass. When this is done, they return the free magic item they were using for the round, and pick a new one. The first person to pass also takes the first player marker that has a victory point on it. So pass first, and you’ll have the smallest pool of magic items to choose from next round as everyone else still holds theirs, but you may get the 1 extra victory point that could earn you the win. The new magic item is placed face down to its passed side, and it directs the player to draw a new artifact card into their hand. Once everyone has done this, players count how many victory points they currently have, and if no one has reached 10 or more points, the next round begins with the collection phase again. 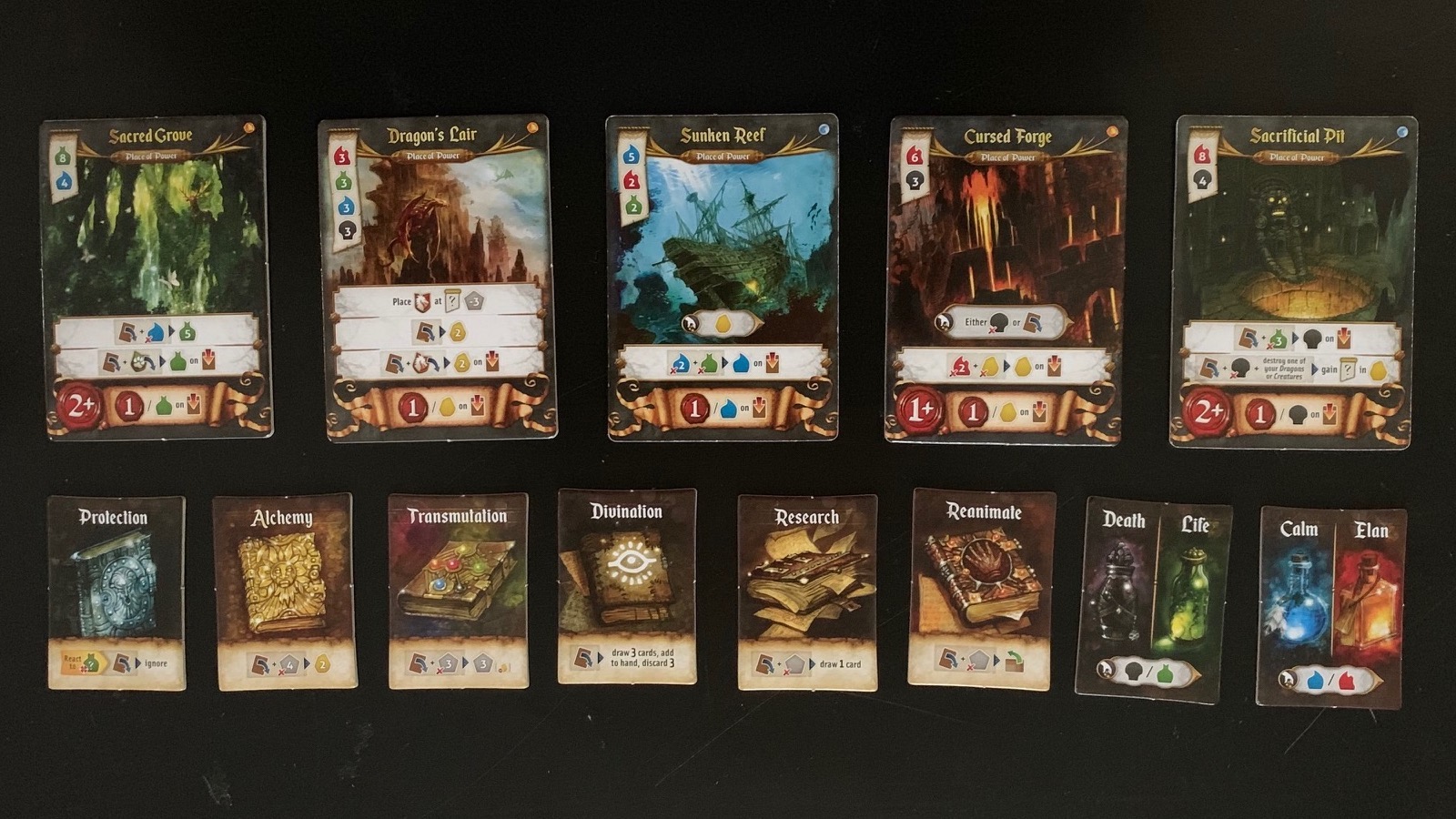 When you first open Res Arcana, its small size is surprising considering engine builders like Terraforming mars include hundreds of cards to give you a huge number of combinations you can come up with to best your opponents. What’s really surprising is the amount of depth they’ve managed to pack into this small game. The idea that each player begins and ends the game with just 8 artifact cards seems like it will create a rigid game with little options, but combined with the magic items, the Mage abilities, the monuments, and the places of power, the amount of turns you end up with a round towards the end is surprising. One really has to pay attention to every icon at their disposal to use their powers to the best of their ability. Sometimes a lot of time is spent earning the essences to purchase a powerful artifact or place of power, just to find out that other players making smaller choice actions have been earning points the whole time, and are about to end the game before this powerful component has its time to shine. One of my favorite mechanics lets you end the round before anyone has passed, and choose a winner right there and then. Use it carefully though, some victory points are less obvious than others, and you may not end up the victor should you pull this trigger too early.

Tom Lehmann has been designing games for quite some time, and his expertise shows in Res Arcana. It’s everything I’ve been looking for in a game; it takes strategy and thought, randomization and drafting makes each game unique, and once you know the game well, you can play a whole game within 30 minutes. It even comes with a plastic tray to separate the essences. One of the only hang ups I had is that some of the icons are a bit confusing at first, especially the ones telling you to discard a number of essences to gain the same number of a different one. We had to check the rule book for clarification a number of times with those, and even then, we had to read the rule a couple of times to really get it.

Eventually my gaming group and I will know all the components so well that the games will end up getting a bit predictable, but that’s something that happens with quick games sometimes, and that’s what expansions are for. There’s room in the box to house such additions in the future, and I will buy up whatever they offer, should they choose to release them.

Res Arcana is a great game, and I look forward to using it as a gateway game for people who think they can’t handle something a little more complex. It’s just the hook I need to convince them to take on some of the heavier games I love to play so much.

Res Arcana is a small clever engine builder complex enough to entertain serious gamers, but easy enough to teach to someone newer to the hobby. Anyone looking for a great filler game should buy a copy.

Nick Cvercko is a 37 year old fella from Flagstaff Arizona that lives with his wife and pets in Austin TX. You can find him at Lamberts Downtown BBQ mixing up all the tasty drinks. He may be a little too in to board games.
Related Articles: Res Arcana, Tabletop
Share
Tweet
Share
Submit