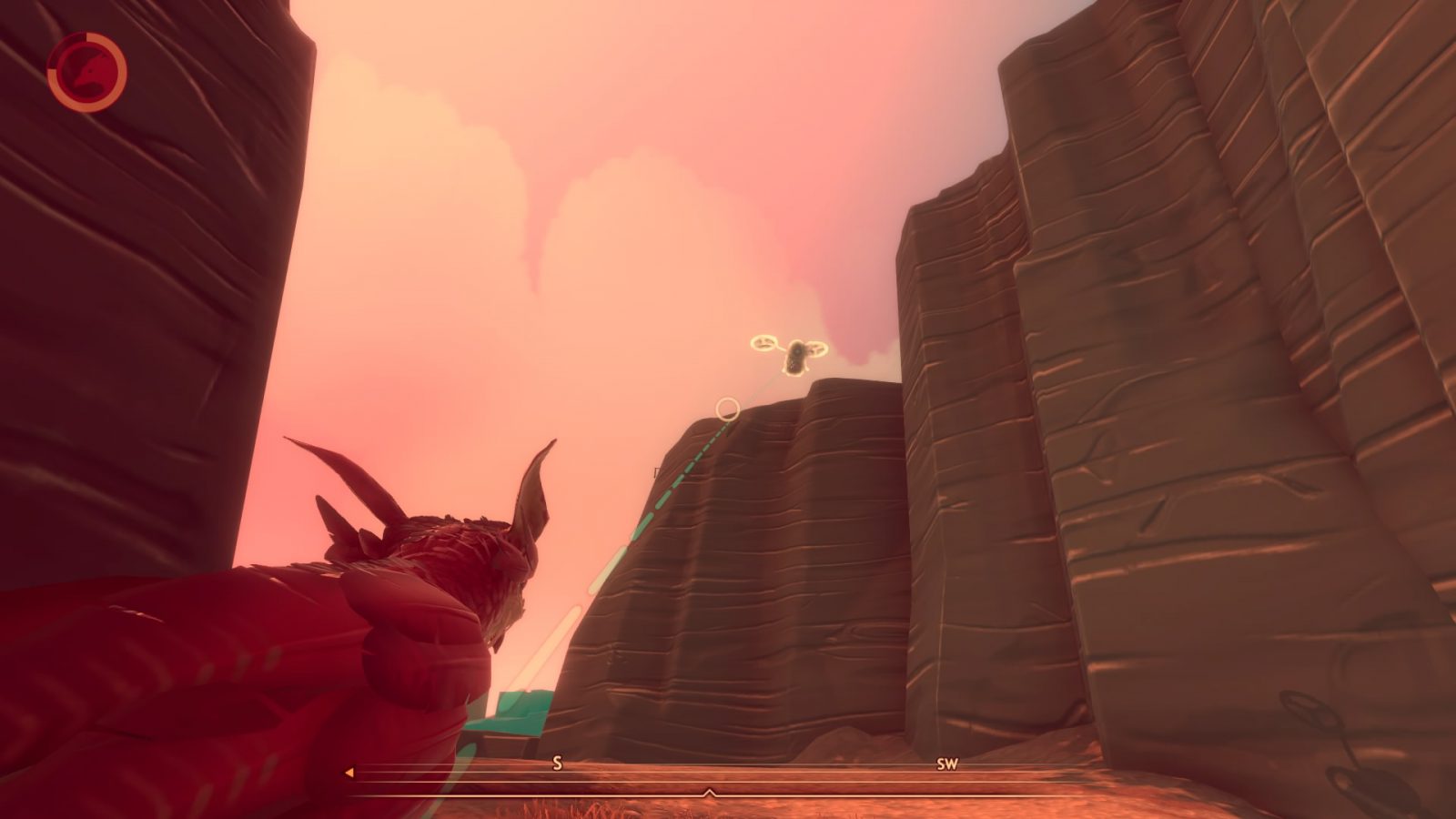 Falcon Age has one of the strongest pitches I’ve ever heard for a game: You play as an indigenous woman imprisoned by colonizers who escapes captivity to fight back against her oppressors. Along the way, you learn more about the culture that was stolen from you and fight to return to your people their land, their sovereignty, and their identity. Did I mention that you do all of this with an adorable bird perched on your arm? Yet, despite all its promise, Falcon Age is full of dull gameplay and fails to make the most of its anti-colonial narrative.

As the game opens, you wake up in prison and see a bird’s nest with an adult falcon and its chick perched in the window of your cell. After playing through a few days of toil, collecting ore for your captors and attending re-education meetings with a robotic guard who’s eager to make you submit just so it can leave its post on your planet, the nest is attacked by a drone, killing the older falcon and leaving its baby in your care. Before long, you get the chance to sic the bird on your jailer and escape, where you’re soon rescued and brought home by your aunt. 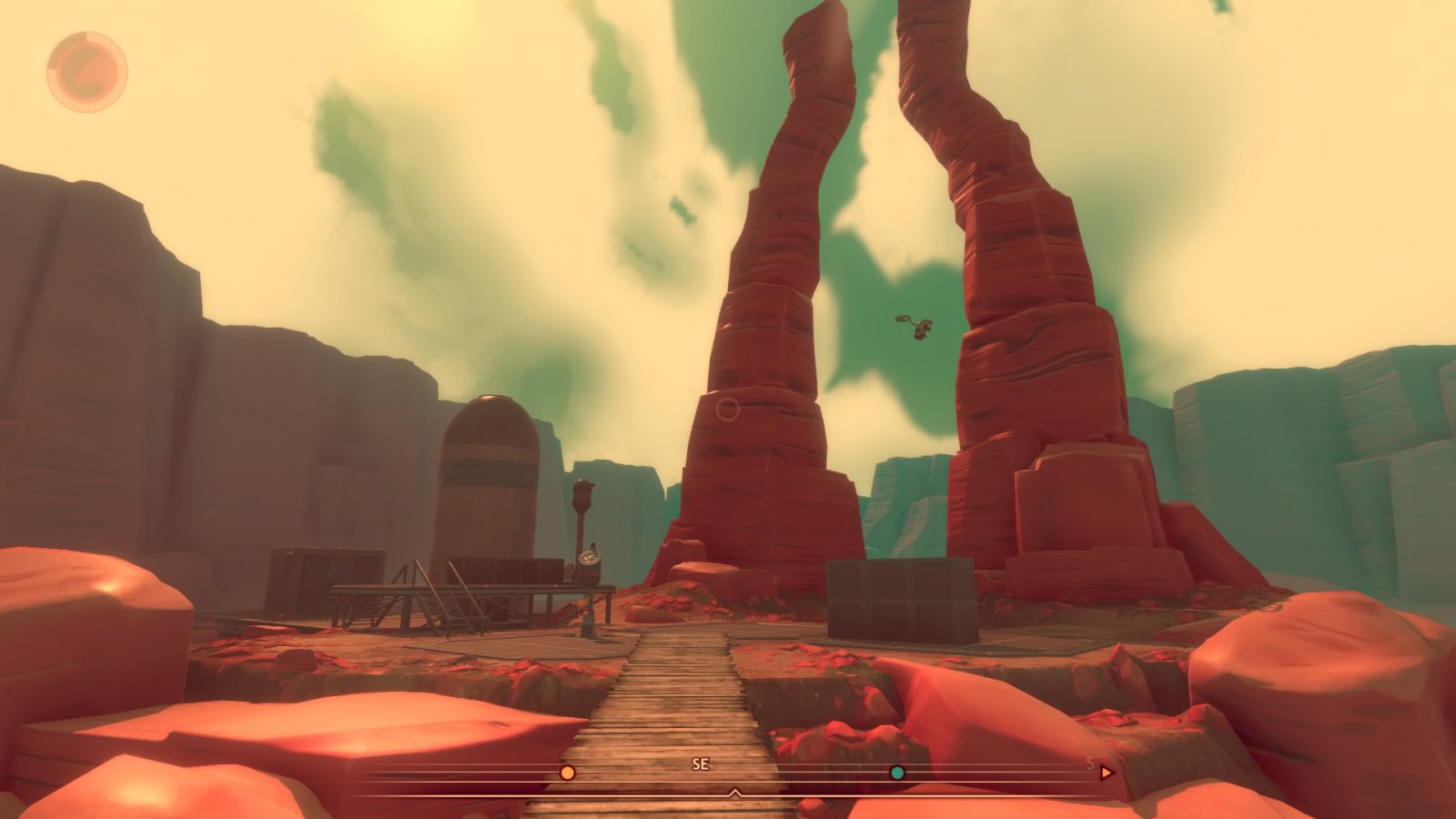 This setup had me eager to learn more about the world, but I was already starting to have concerns about how frictionless the game felt. It may be because I wasn’t playing in the optional VR mode, but I just didn’t feel like my actions had much impact. I felt a disconnect between my button presses and the response from my character, Sarangerai (or Ara, as she’s most often called), almost like I was observing someone else play-act rather than being in control of actions that had real consequences. That feeling would persist through the entire game, and ultimately made me less connected to my falcon than I wanted to be.

Aside from this disconnect, which dulled a lot of the game’s appeal for me, the best part of Falcon Age by far is your bird. How well the game works for you will basically depend on how much you feel for your feathered friend. The game does a lot to get you to bond with your bird, letting you find different accessories to put on it, and giving you designated controls to pet and play with it. It asks you to give the bird a name and tells you that the bond between women in your culture and these falcons is sacred. Despite all that, I could never get fully invested in the falcon. It’s cute, sure, but it doesn’t act much like an animal. You can call it to you and send it out to gather food or attack enemies with the push of a button, and it simply obeys. The only thing that suggests that it’s anything other than any standard video game tool is how it swoops slowly toward its target and remains in the air afterward. In practice, it just feels like a weapon that takes its sweet time firing when you pull the trigger. There are suggestions in dialogue that taming a falcon is a monumental task, sort of a rite of passage, but there’s no hint of that in the gameplay. Not once will your falcon disobey or show any will of its own. 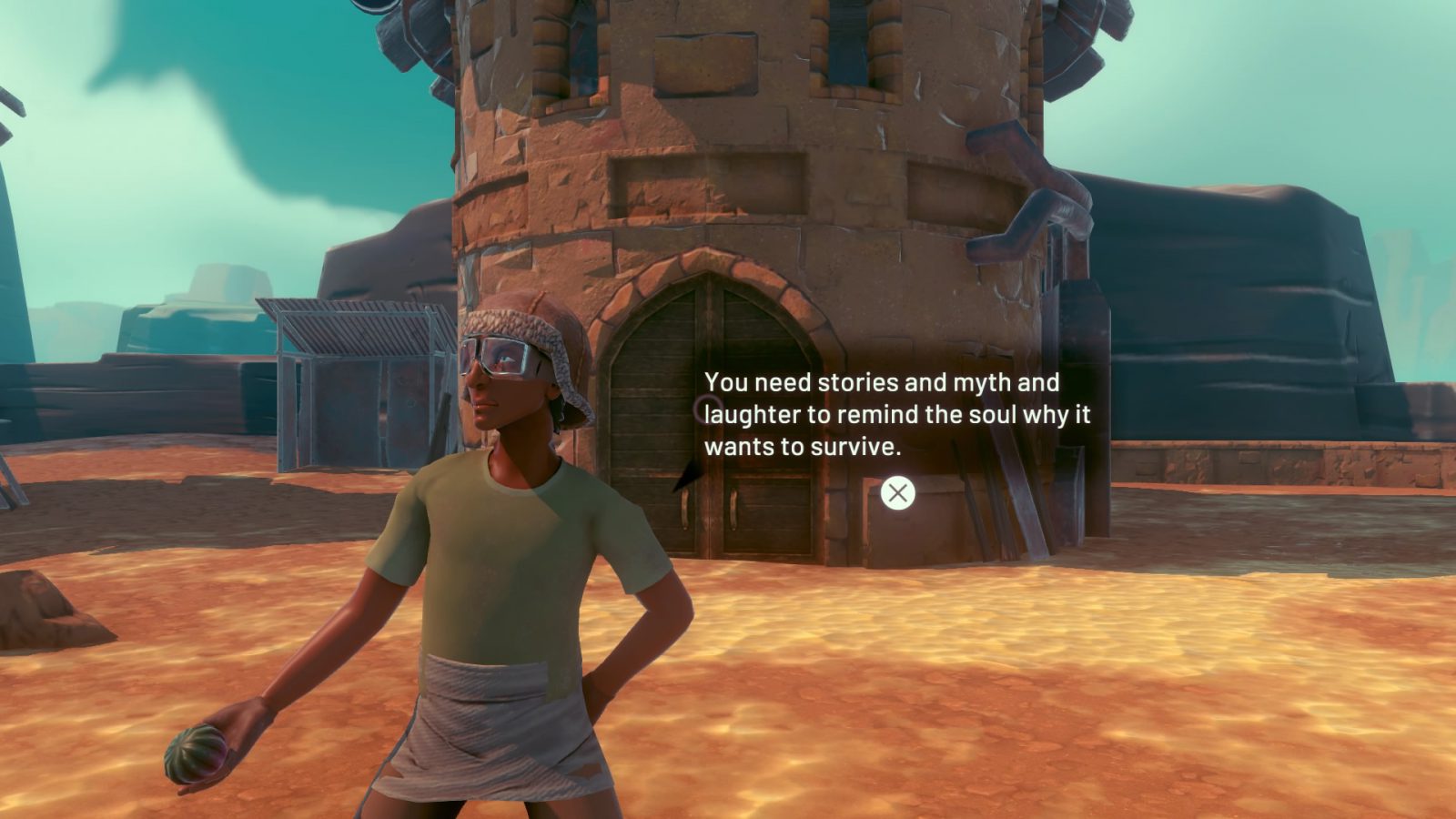 Sarangerai’s culture, like her falcon’s innate wildness, is hinted at, but never really shown. You’ll meet a handful of the folks who inhabited the world before the colonizers arrived, and while some of them are pretty funny, none of them feel fully real. They’re there mostly to tell you about aspects of their culture, but never in a very engaging way. You’ll hear scraps in dialogue if you take the time to talk to them between missions. Some will go into detail about their traditions, their passions, their personal philosophies, but it’s all completely flat in delivery. I never got the sense that I was helping to reclaim a shared culture, as the game says I am. It felt more like getting a history lesson. There’s also no hint of the culture that’s been stolen in the game’s environment, an arid, yet sometimes beautiful, maze of valleys and plateaus.

Learning about Sarangerai’s culture and helping it to flourish in spite of colonial oppression was the main reason that Falcon Age appealed to me, and the clumsy handling of it was a dagger in the game’s heart. I can’t imagine that even good combat or interesting puzzles would have saved it without that, but Falcon Age doesn’t have those either. I’m sure it feels at least a little better in VR, but with the standard controller, combat consists solely of sending your bird to stun an enemy then hammering on the single attack button to destroy them. And there’s surprisingly little to do in Falcon Age aside from combat. I was hoping to find some interesting ways to interact with my falcon to overcome obstacles, but it all boils down to holding a trigger to aim the bird at an enemy or object and watching it swoop in. 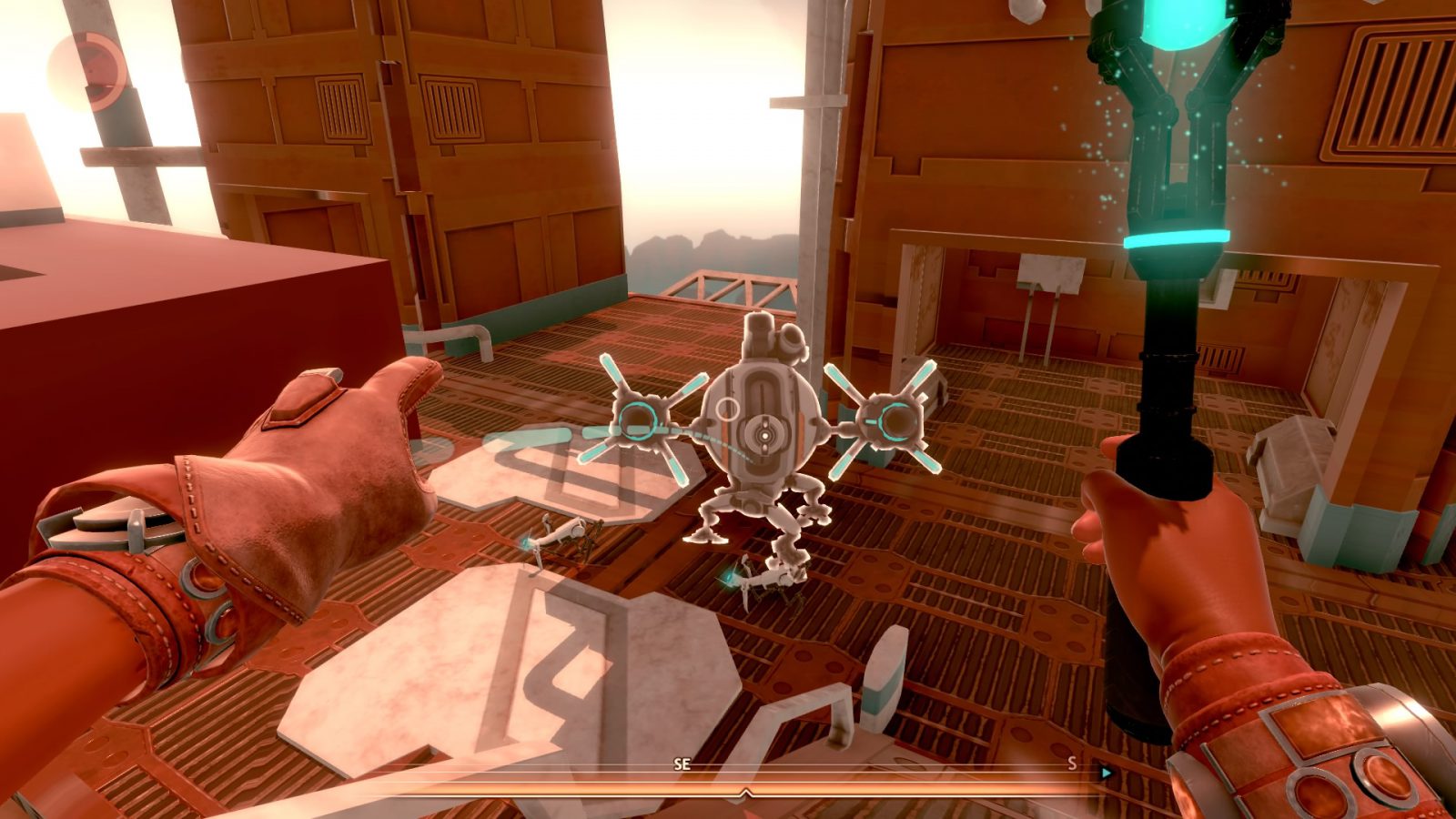 I had high hopes for Falcon Age, particularly for how it might tell a story about standing up to oppression, rather than playing a conqueror yourself, which seems to be the default for so many other games. There are signs of that story in Falcon Age, along with elements of what I was hoping for in its protagonists’ relationship with her bird. I want to celebrate it for trying to do something that’s not only different from the dominant ideology of most games, but opposed to it. In the end, though, I just felt a step removed from both the game’s story and its action. It’s a shame, because there are hints of something great in the moments when you’re perfectly in sync with your falcon or when you’re learning about Sarangerai’s culture. These moments just don’t come often enough, and never add up to anything bigger.

Falcon Age has some extremely interesting ideas at its core, but never gives them the chance to shine. It tells the story of an indigenous woman fighting back against colonial oppression by training a falcon in line with her cultural traditions, but hides the best parts of its premise behind repetitive combat and boring presentation. There are moments when Falcon Age let me feel the bond between my character and her bird or see the culture she was fighting for, but never enough to be satisfying.

A committed indoor kid, Bryan moved from Pittsburgh to Los Angeles for a prettier landscape to ignore. They can be lured outside with promises of taco trucks and film festivals, and enjoy trawling through used book stores for works on the occult. Bryan has been gaming since the SNES era and is a sucker for good pixel art.
Related Articles: Falcon Age
Share
Tweet
Share
Submit