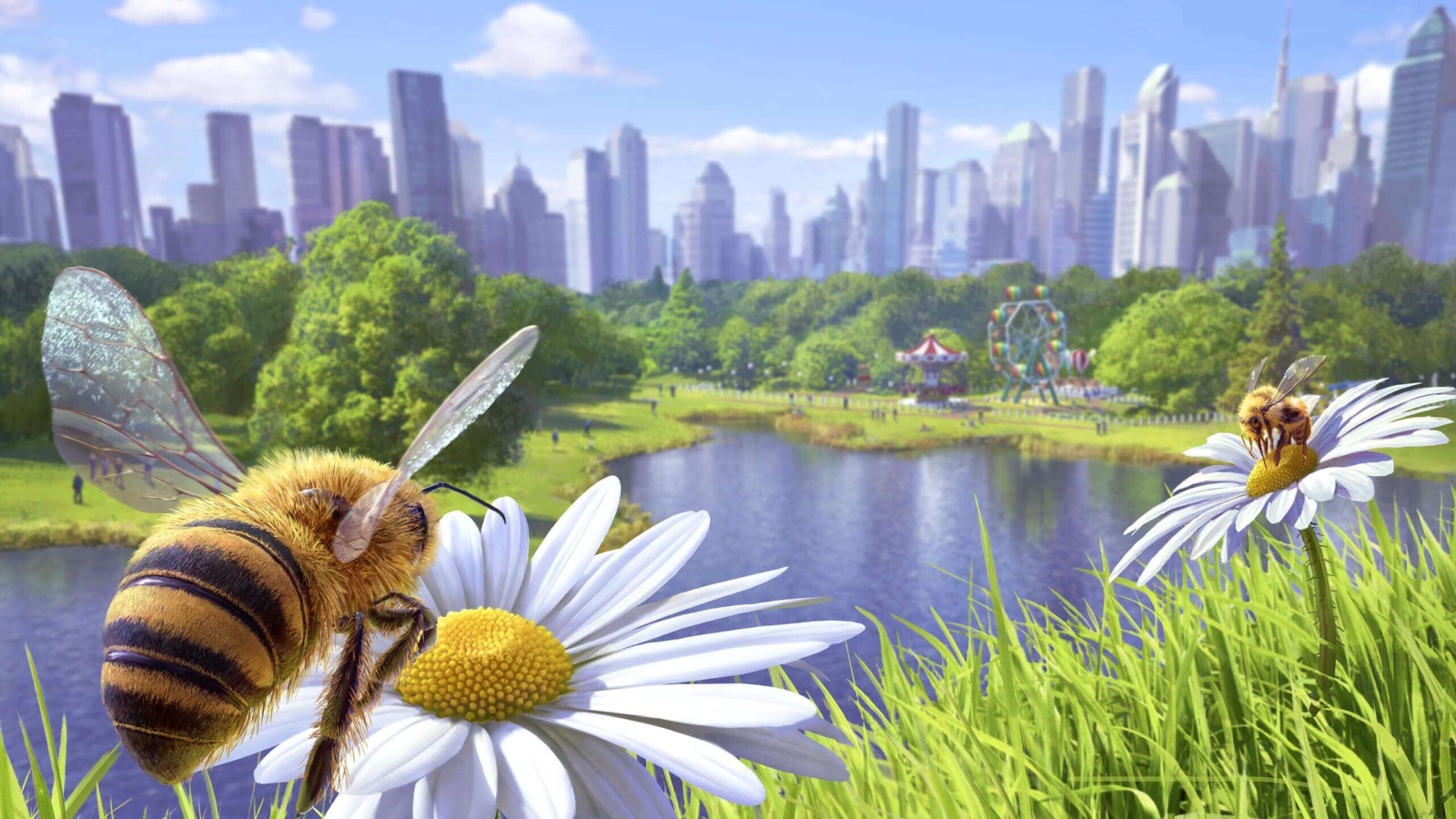 I wasn’t quite sure what to expect when we got the chance to review Bigben’s Bee Simulator, but I’ve always been interested in the hive mind, and how bees and ants work so efficiently. I had high hopes for Bee Simulator, unfortunately it lost my interest very quickly.

While the developer has not stated who this game is targeted at, I am leaning more towards children than adults. The opening movie tells a short story on how bees are in decline because of pesticides, and showcases cute, artsy graphics. You’re then dumped into the tutorial where you learn the controls for flying and collecting pollen. The tutorial has cheerful, bright colors, and the same artsy style as the intro video, and the controls are very easy to learn. Bee Simulator does have a co-op option, where you’ll play side by side in splitscreen.

Sadly, the majority of this game is just flying through circles, or flying into flowers that have circles over them which indicates pollen. Collecting the pollen can unlock a speed boost for your little bee, enabling him to fly faster. It’s very reminiscent of the Firebird’s Challenge at the Darkmoon Faire in World of Warcraft. 98% of the time you spend in Bee Simulator, you’re just flying through rings. You also have “bee vision” which lets you see rare flowers that you can gather from. There are a few little mini-games, such as fighting another insect.

The flying challenges get harder once you’re out of the tutorial and into the real world, but again it’s all the same basic principle…fly through rings and collect pollen. Though the controls are very simple, the game seemed unforgiving when my bee bumped into things in the open world, and the camera shake that went along with it got old pretty fast. I lost interest in this quickly, but my five year old son wanted to play. He sat at the computer for about two hours, and the game seemed to hold his attention quite well.

I think I was expecting more from the game, and there are several things that probably could have been implemented that would have made this an amazing experience. It is a fun, educational way for kids to learn about bees, but as an adult I’d like to see more depth to the game.

Bee Simulator is currently retailing for $39.99 on the Epic Games Store.

While I definitely appreciate the hard work that went into making this game, and the cute, fun graphics, this just isn’t something I can see myself picking up again and playing, though I do believe this could be a fun game for young children to play together. I think I was expecting more, maybe even looking for the choice to pick which job in the hive to play, and hope that the developers might consider adding more to the game in the future!

Holly Hudspeth is a best-selling author living in Fort Worth, Texas. She has six published novels to date; The Skyy Huntington Series, which is an epic dark fantasy adventure, and One Small Detail, a stand-alone medieval fantasy. Holly also enjoys writing fan fiction based on her avatars from games such as EverQuest, Elder Scrolls Online, and World of Warcraft. Her first major purchase at the established age of nine was the NES, and she has been gaming ever since. She enjoys fantasy games, city builders, RPGs, MMOs, SMITE, and The Sims franchise. Most nights she is in SMITE with her husband and friends, or playing ESO. When she isn't gaming, she is probably either at Disney or planning her next trip there.
Related Articles: Bee Simulator, Indies, Industry
Share
Tweet
Share
Submit