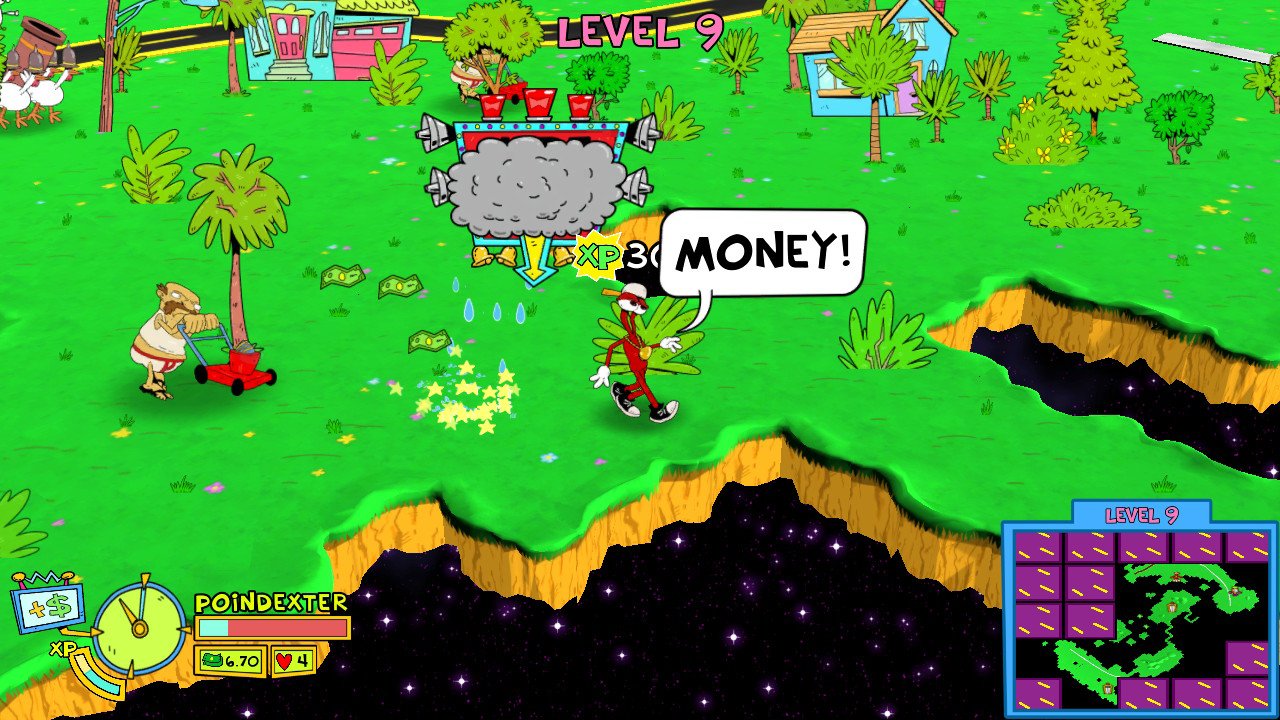 From the triumphant return of Sonic to the unexpected reappearance of Bubsy, it seems that these past few years have been a renaissance for 90s mascots. An unlikely duo in the form of ToeJam & Earl have recently reared their groovy heads back on the videogame scene, with ToeJam & Earl: Back in the Groove. The game has some goofy charm and a uniquely bizarre aesthetic that helps overcome its sometimes buggy interface and performance issues.
The fourth game in the franchise, ToeJam & Earl: Back in the Groove has the duo joined by Latisha and Lewanda as the four characters crash land on earth and have to return to their homeland Funkotron. In a manner akin to its original game, players will have to assume the role of a character and explore 25 different levels where you need to find 10 of your broken spaceship’s pieces. The game is played in a 2D isometric perspective, and you’ll have to navigate the terrain while avoiding a horde of bad earthlings (and interacting with good ones). The initial premise is a rather simplistic one, and it works on a gameplay perspective. 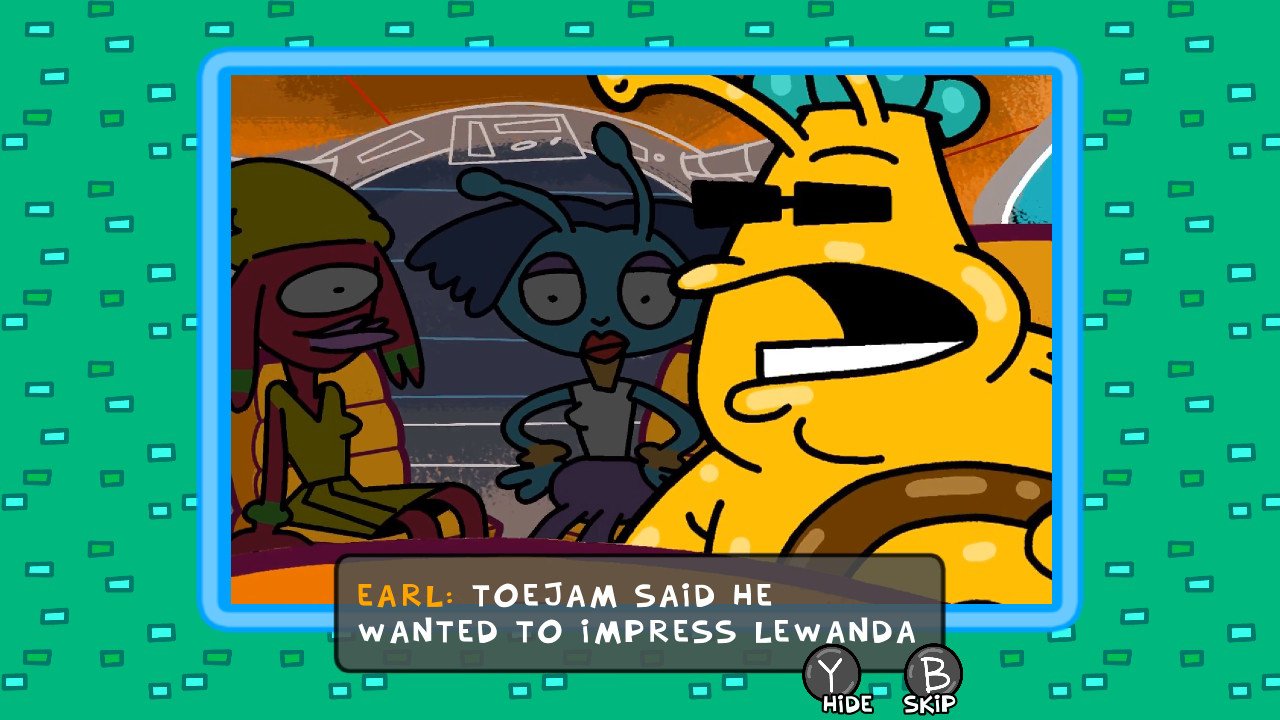 While I never played the first games of the series, I liken ToeJam & Earl to an easier roguelite mixed with developer HumaNature Studios’ previous title, Doki Doki Universe. Your main gameplay loop consists of exploring randomly generated floors of levels (though you can have a fixed world with the same levels), shaking trees, bushes, and houses in order to find money and different presents to assist you. Earthlings are NPCs that can either help you (such as a group of cosplaying nerds that you can wager money with or an elf that can give you presents if you can catch him) or hurt you (such as a woman with her baby that tries so hard to figuratively mow you down). While the first few levels of each runthrough don’t have too many obstacles to tackle, by the time you reach the 20s you’ll have to go out of your way to dodge killer food trucks and people with lawnmowers that literally want to mow you down. It’s a frantic buildup that makes ToeJam & Earl: Back in the Groove frantically fun.

You can also level up by exploring enough of the area or grabbing certain items, which helps you earn different stats like luck or max health. There are other minigames sprinkled in the levels as well, from an otherworldly endless runner (drawn in a crude chalk-style), to a dance rhythm minigame that can earn you money and presents if you do well. While a given run might last a little more than an hour, there are plenty of different unlockables and things to do that it encourages multiple playthroughs to explore everything the game offers. 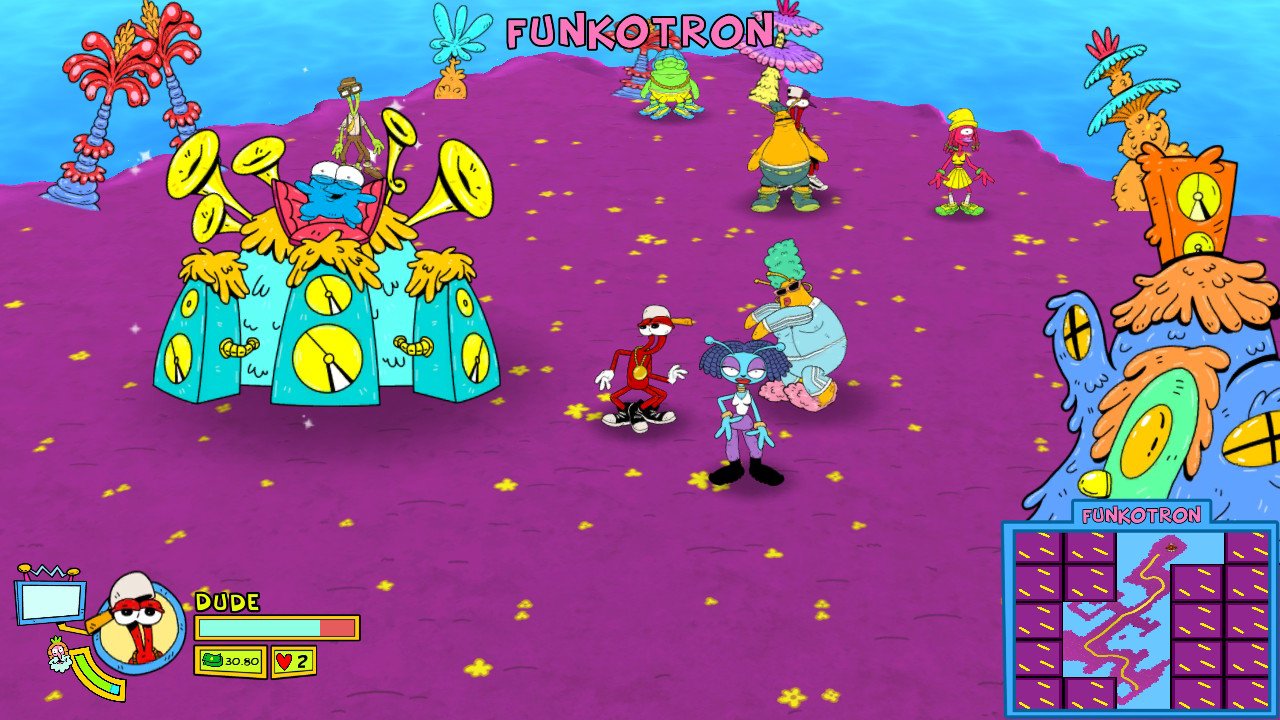 The characters and NPCs feel dated in 90s tropes, but in a way that makes ToeJam & Earl: Back in the Groove that much more nostalgic. These characters ooze personality in a way that 90s mascots could only do back when we were arguing if Sega or Nintendo was better, and the characters’ text-only banter is rather humorous. I loved the soundtrack, which has a distinct hip-hop twinge, and the overall presentation is bright and charming, from the title screen which has the duo shouting some cool 90s slang to even the loading screens. On a side note, the duo’s official Twitter account is pretty banging, and worth a follow if you want some humor that might be a little above the source game’s E10 rating. 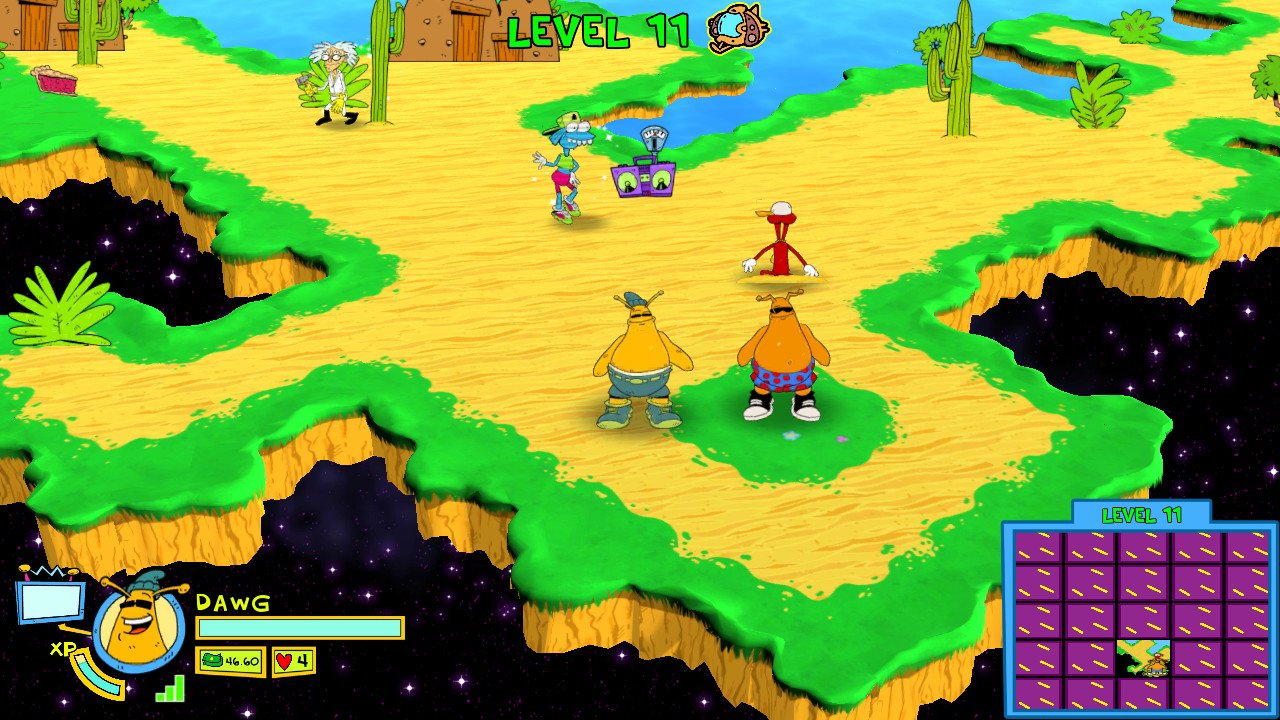 The random nature of the game, on the other hand, is a hit-or-miss affair, however. On one hand, procedurally generated levels and powerups do have their novelty, especially with Back in the Groove, but it’s also the game’s shortcoming. Presents are acquired randomly, and have different effects, like spring shoes that can let you hop around a level to a rain of tomatoes that will destroy any earthling in its wake, good or bad. This reaches levels of meme-worthy randomness, and I couldn’t help but chuckle at the powerup that gives you massive gas for a temporary moment. There are also bad presents that range from spawning bad earthlings to outright killing you, and most presents need to be opened at least once per run to be identified, so you can feel the roguelite inspirations here. The game feels relaxed yet tense at moments, and due to the randomly generated aspects of it, you can be placed in some unfair situations. Let’s just say the unlockable random world hard mode wants to destroy your life for no adequate reason. The fixed world is a more cohesive experience, with the final levels filled with various dangers and traps, and also one that uses all environments.

However, the randomness and procedural generation does lead to hits to the technical performance of the game, especially when it comes to multiplayer. The game is perfectly fine on Switch when running with just one player, but while four-player multiplayer is offered, it’s something to be desired at its current state. While local multiplayer is functional, during my online playthrough, framerate drops were frequent and even at times nearly unplayable. I got disconnected twice on a casual runthrough, and sound effects weren’t playing on my end, making my experience feel lifeless and dull. The multiplayer concepts feel kind of weird as well, since there are times where you can get kicked down a level if you drop off the edge of it (which can be all too often). The person on the other level can’t advance until you head back to the current level, which means you’ll have to trudge back up in order to continue. This setback can really kill the flow in multiplayer games, since if you’ve already explored all that there is in a level, there’s really no reason to stay. Load times and bugs are even more apparent here, and as a result, playing with more than two people online makes the experience unpolished and unstable. 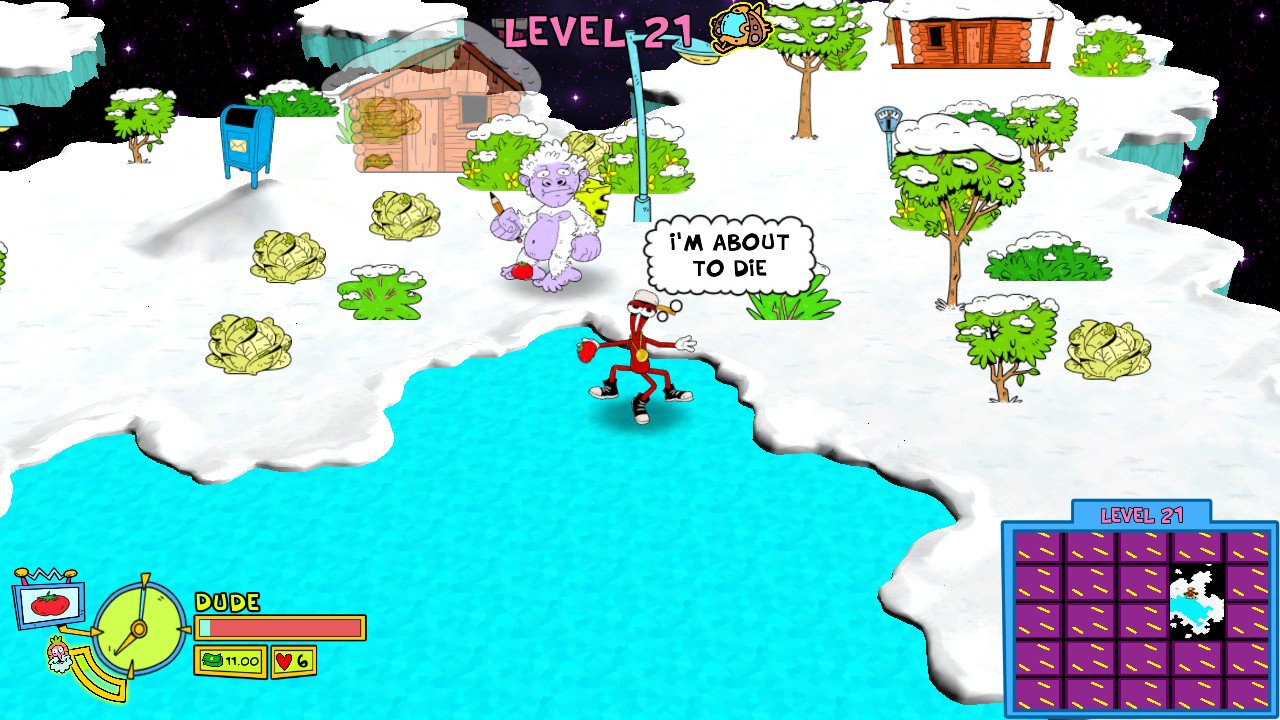 ToeJam & Earl: Back in the Groove

While still in need of some technical polish, ToeJam & Earl: Back in the Groove is a loving flashback to the good old 90s, filled with some lighthearted laughs and killer beats in an easygoing adventure setting. Fans of the original will definitely find something to love, and those who are new to the craziness can find some great fun here.

Elisha Deogracias is an aspiring accountant by day, freelance writer by night. Before writing for Gaming Trend, he had a small gig on the now defunct Examiner. When not being a third wheel with his best friends on dates or yearning for some closure on Pushing Daisies, he's busy catching up on shonen manga and wacky rhythm games. Mains R.O.B. in Smash. Still doesn't know if he's a kid or a squid.
Related Articles: Indies, ToeJam & Earl: Back in the Groove
Share
Tweet
Share
Submit