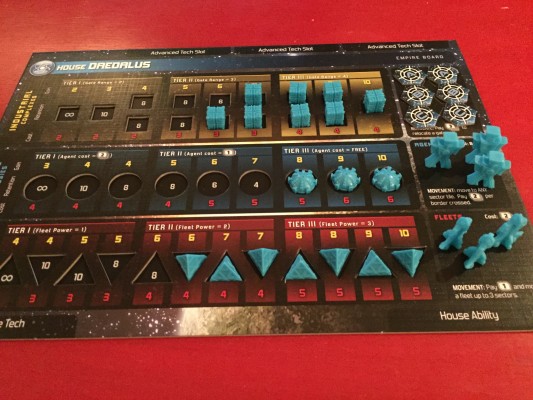 The 4X genre (explore, expand, exploit, exterminate) is a popular genre. Sid Meier’s Civilization and Master of Orion 2 are some of the most prolific PC games in the genre. However, few board games have tried to pull off the experience, possibly due to the length and complexity. The third edition of Twilight Imperium is the truest game in the genre, but requires a weekend to play. Eclipse has similar concepts and plays in a much shorter time but loses some of the epic feel because of it. Now Hegemonic has come out, trying to take the crown of the best 4X board game.

The box for Hegemonic is heavy, and once you open it, you’ll see why. The components include:

To set up the game the Galactic Core board is placed in the center, and galaxy boards are laid down with the number of galaxy boards used dictated by the number of players. Examples are given for starting layouts in the rulebook, but they can be placed by the players with the galaxy boards touching at least two other boards with one being the Galactic Core when possible. The components are distributed by color, and each player is given five technology cards with the rest forming a draw deck. Each player is given two sector tiles from the sector draw stack. The home sectors are placed one at a time on any unoccupied galaxy board as long as it isn’t adjacent to another home sector with starting buildings placed on it. Each player then plays one sector tile next to their home sector and create a sector pool with the remaining sector tiles.

I like this setup for a number of reasons. First, it takes into account the number of players in the game. The more people playing, the more space there is for the game. Secondly, it doesn’t allow one player to completely manipulate the placement of the board. It also gives enough space for each player to build out without worrying about getting ganged up on right away. The sector tiles placed and where they are placed ensures that each game plays out differently and allows the players a choice as far as how they want to start.

The player boards make maintenance of the game a breeze. Each board has indentations for the structures to go in. The number below each structure gives its cost, while the number above indicates the amount of income given for each kind of base. It also makes it easy to see how many structures each player has built and of which kind.

Turns comprise of six total phases. The first phase is collection, where each player is given money dependent on the structures built. The second phase is expansion, where a new sector tile is flipped and placed in the sector pool, and one of the tiles in the sector pool is placed on any empty hex in the galaxy. That player then draws a technology card from the draw pile, the top discard pile card, or from the advanced technologies in their player board. Then that player discards a technology card or advances one to their player board. Advancing a technology gives players an ongoing ability or bonus.

The following three phases are action phases. During this time all players choose an action card and reveal it at the same time. The cards are then resolved in the order of the number on the card and then picked up by the players once all the actions are resolved. Each action card has at least two actions, with most having a basic action allowing the player to either get two money or gain a technology card similar to the expansion phase. Other actions allow players to build structures, destroy or take over enemy structures, gain money, add a sector tile to the board, or refresh their technology hand. These phases take up a majority of the game and will most likely determine the winner. This is similar to Race for the Galaxy, where everyone selects what action they want to complete, except in Hegemonic players only get to perform the action that they select.

The final phase is arbitration. The Arbiter token is given to the player with the most money. Then players turn in their money until they are down to their retention limit on their player board, and finally victory points are scored. Each galaxy board is scored with the player with the most structures getting six victory points, the second most three, and any structures at all one. If a player is the only player in that galaxy board, they gain an additional two victory points. The galaxy core board is scored similarly, except player is given an extra victory point. If no sector tiles remain or there aren’t any empty hexes the game is over. This makes it easy for all players to tell how near the endgame is.

Explaining a game like Hegemonic can be a difficult task, but the rulebook does an excellent job of explaining the rules. It goes over the basics of the rules, then goes in depth for the individual phases, then explains the advanced options. The side bars include helpful examples showing how to follow specific situations. While some necessary page flipping happens when first playing the game, eventually the rules feel natural and the rulebook becomes an afterthought.

Building a better galaxy requires networking where your structures are, how they support the other structures in the tiles next to them, and how to expand from there. When consulting takeovers and destroy orders, your network helps to determine the winner of the conflict. Political allies and technology card power can be the determining factor. You need allies close by, making sure that you can lend a helping hand or else you might discover your allies have turned their back on you.

While the category of 4X usually means long and complex games. Hegemonic’s turn structure helps the players become familiar with the actions, but it doesn’t mean it won’t take at least a full game to understand the complexities. The action phase cards show diagrams that make sense after looking at them for a few minutes. At first the turns won’t take too long, but after a while the board gets stretched out and can give someone with analysis paralysis take a much longer time. However, since everyone selects their card at the same time, if one player is holding up the game, they will hopefully see that everyone else is ready and make a selection sooner. In any case, Hegemonic can be played in a much faster time than Eclipse or Twilight Imperium.

The optional rules provide extra options that give the game more depth. These include leaders that give players unique abilities that can be used during the game, an option for multiple technology discard piles, a draft for the technology cards, a longer game where the entire galaxy is filled before the game ends, and one where the home embassy counts as a political power for all factions. These can help Hegemonic feel fresh after multiple plays without drastically altering the rules. The technology card draft gives a bit more control over which technology cards you have and feels fairer than the random draws, especially with larger numbers of players.

The denseness of Hegemonic requires the kind of players that either likes this style of game or are willing to try it. At least a session of Hegemonic won’t feel completely wasted if players don’t like it due to its shorter play time. That being said, those that want a little luck in their gaming may be turned off by how deterministic every action resolves. It’s a game that I am glad that I have played, but it’s one I can really only recommend it with the right audience.

While not working as a Database Administrator, Keith Schleicher has been associated with Gaming Trend since 2003. While his love of video games started with the Telestar Alpha (a pong console with four different games), he trule started playing video games when he received the ill-fated TI-99/4A. While the Speech Synthesizer seemed to be the height of gaming, eventually a 286 AT computer running at 8/12 Hz and a CGA monitor would be his outlet for a while. Eventually he’d graduate to 386, 486, Pentium, and Athlon systems, building some of those systems while doing some hardware reviews and attending Comdex. With the release of the Dreamcast that started his conversion to the console world. Since then he has acquired an NES, SNES, PS2, PS3, PSP, GBA-SP, DS, Xbox, Xbox 360, Xbox One S, Gamecube, Wii, Switch, and Oculus Quest 2. While not playing video games he enjoys bowling, reading, playing board games, listening to music, and watching movies and TV. He originally hails from Wisconsin but is now living in Michigan with his wife and sons.
Related Articles: Hegemonic, Tabletop
Share
Tweet
Share
Submit