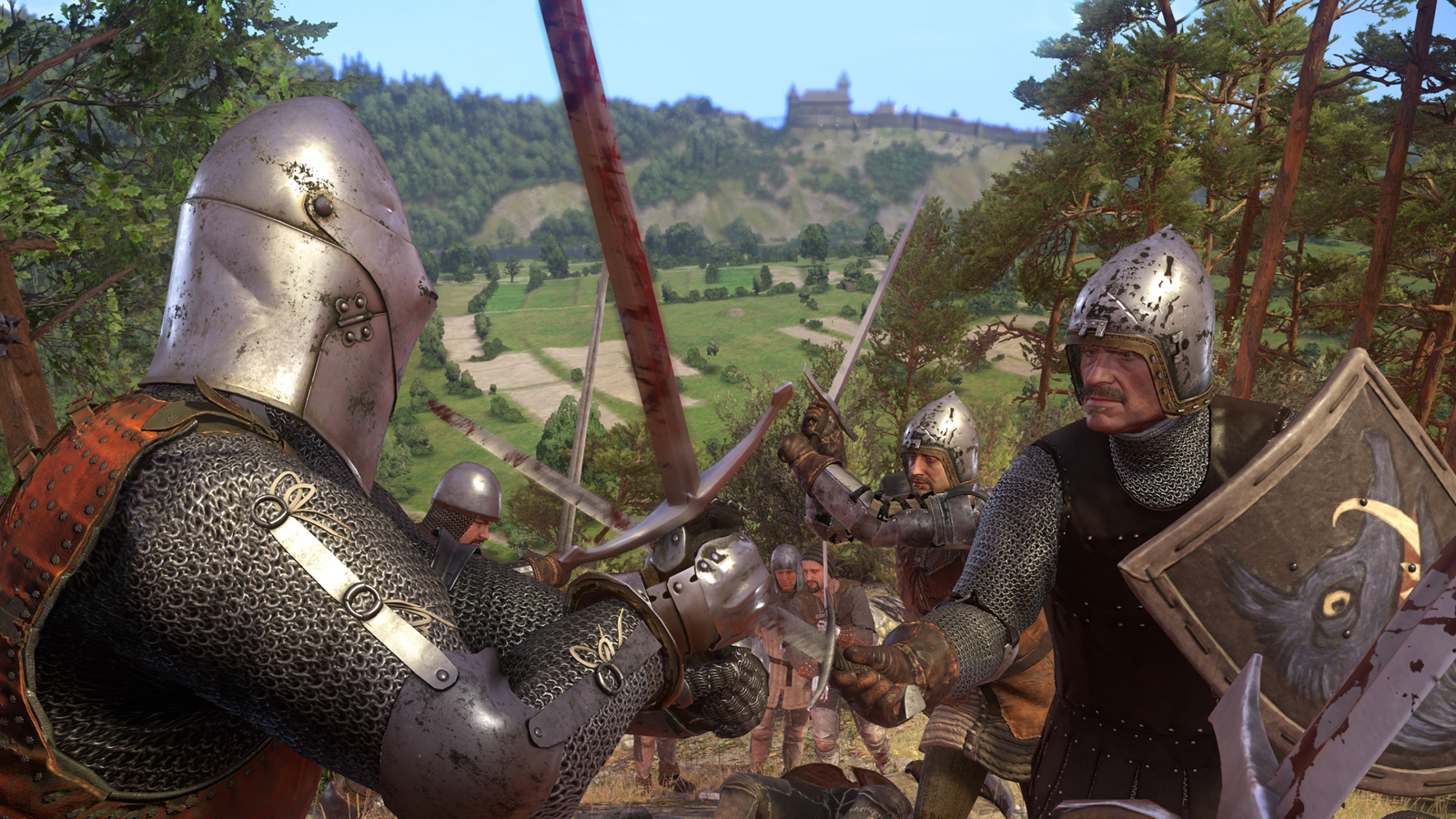 There are plenty of open world games on the market, and more on the horizon, but I can’t think of a single one that so completely captured my attention, being equal parts frustration and fun. Accurately representing the painful machinations of life in the 15th century, Kingdom Come: Deliverance will not hold your hand, and that’s simultaneously the best and worst parts of it. It’s also one of the most captivating RPGs I’ve had the pleasure to play in a very long time.

The foundation on which Kingdom Come: Deliverance is built is my absolute favorite part of what Warhorse Studios has brought to the table. You play as Henry, the nobody son of a blacksmith. You aren’t the savior, you aren’t a lord, and you most certainly are not a hero. No, in point of fact, you are a nobody without a Groshen to your name, no prospects beyond following in your father’s footprints, and you are most assuredly not going to save the land. You are a flea-bitten peasant, and nobody in the world of Kingdom Come will ever let you forget it.

While cranking out a blade for a local lord, war banners fly on the horizon. Without provocation or purpose, an invading army marauded through Henry’s little town of Skalitz, killing his friends and family alike. While fleeing to a nearby town to warn them of the impending slaughter, Henry catches an arrow in the thigh and nearly dies. Now an orphan, he is penniless, without combat skills, and tight in the gut with a need for blood and vengeance.

Kingdom Come: Deliverance has a storyline filled with twists and turns, and the moment you feel like you’ve got a handle on where it’s going, there’s another thread to pull. Life in Bohemia in 1403 is bigger than you, and that’s clear from the start. The fight between King Wenceslaus and his brother Sigismund isn’t much affected by your quest for vengeance, and that’s to be expected in a game where life is a very temporary condition.

Before we get too deep into this review, you might want to take a look at the requirements for this game on PC. With a 1080 TI card I am able to run the game at 4K with all settings at Ultra, with an average framerate around 30fps. Dropping back to 1080p stabilizes the game to 60fps at Ultra, but know that this game will push your system hard. The game will also be on Xbox One and PlayStation 4, so other options are available given that you can’t buy a video card for less than triple MSRP right now. That said, if you’ve got the hardware to handle it, Kingdom Come: Deliverance is eye-poppingly gorgeous. The world is stuffed full of detail at every corner, and despite this game’s Kickstarter birth, it rivals and in many ways exceeds any AAA title on the market.

This game could be retitled “Medieval Life Sucks: The Game” as you are constantly reminded that you are a peasant, life is hard, and you are very likely to die. You can succumb to all matter of injuries, bleed to death, be cut down in just a few hits, turned into a pincushion in any battle where archers are involved, be poisoned as your meager rations spoil in your pack, or even die from lack of sleep. It’s not all bleak death, though — through some story machinations you’ll get a shot to suck slightly less.

To quote Jake the Dog from Adventure Time “Dude, sucking at sumthin’ is the first step towards being sorta good at something”, and nowhere is that more true than here. If you pick up a recurve bow, you will have a hard time even drawing the string, much less hitting anything. I lobbed over 30 arrows at a stationary rabbit, who from four feet away, I’m fairly certain, was laughing his fluffy little ass off at my ineptitude. I kept hitting the range and then eventually…I sucked slightly less. I found an instructor, got some lessons, and then began to be able to hit a stationary target reasonably frequently. Soon I didn’t even need the vambraces to guard my wrist from damage.

I’d be remiss in my duties if I said that sword fighting was the same exercise in pain that archery is, when in fact it is far, far harder. Unlike archery, sparring with a wooden sword will still leave you laid out with injuries. You have six basic attacks – five directions, and a direct stabbing motion to start, except that you’ve never held a sword, much less swung one in battle. Your first few fights will be frantic, difficult, and very likely lethal. Like all skills, your abilities improve through use, and eventually you’ll stop getting nearly killed at every turn. I can’t describe how awesome you feel when you finally get some quality armor and take out half a dozen well-equipped soldiers through your eventual mastery of the complex combat mechanics.

Every system in the game has a similar, albeit less lethal system. Alchemy requires practice, recipes, ingredients, and specific processes. Unfortunately, like most peasants of the time, Henry can’t read. Finding a scribe who will spend the time to teach him, having the coin to facilitate the lesson, and then knuckling down and reading books opens the doorway for alchemy, Latin, or even being able to read simple road markers. Here’s a look at some successful alchemy, as well as a peek at what it looks like being unable to read.

There are a staggering amount of skills and traits to upgrade, but Kingdom Come: Deliverance is often about reputation more than combat prowess. Talking to people leans on charisma and your speech skills, but it also relies on your ability to dress the part. While your manly funk (when combined with a skill perk) will impress the ladies, it will not woo the menfolk. Similarly, showing up to the call of your liege lord while covered in bandit blood will elicit a shocked response. Wear and tear on your layered clothes and armor (via a staggering sixteen designated slots) is visually represented, and will be noticed with comments like “Henry! Did somebody steal your fancy clothes?”. Taking a bath regularly (or at least washing up a little bit in a water trough), and maintaining your appearance is important, and will affect your charisma and ability to sway conversations in your favor, or being told to “fuck off”. Did I mention that the game is rated M?

The save mechanics in Deliverance come courtesy of alcohol – specifically, “Saviour Schnapps”. The idea behind the mechanic is likely to prevent the wholesale fleecing of everyone around you by using save scumming techniques, or trying to back out decisions you’ve made to see all of the options. You can brew these potions once you’ve gotten your hands on the right ingredients and the reading skills to decipher the instructions. You can also purchase them, but they don’t come cheap. It also means that you can’t easily save and quit, so it may not appeal to all audiences, but mods have already corrected this, and the developers plan to institute changes as well in upcoming patches.

We’ve seen several patches from Warhorse that have fixed a lot of bugs, but there are still more than a few bugs remaining. The archery range continues to have an issue where the other archers won’t fire, textures flicker here and there, and the camera gets fairly drunk during conversation closeups. I also ran into an issue where I couldn’t save at all, forcing me to back up to a previous save over two hours earlier to clear the problem. I’ve had guards bust into my bedroom and demand that I light a torch, fining me for not using one in my own personal room. I’ve also been arrested for assault after a sanctioned sparring match. Reddit is full of plenty of examples of physics bugs, and complaints of infinite loading screens. I guess what I’m saying is, it has the same problems as any other open world game. These bugs are a problem, but it’s clear that the game’s success is driving Warhorse to fix them as fast as possible. In frustration, I found myself “practicing” drinking by saving very often, despite the wonky save mechanic.

There is one design decision that irritated me to no end — forced linearity in an otherwise free world. After mounting a rescue mission, I had to report to a quest giver in the courtyard to travel to a neighboring village. I was overburdened with gear and needed to facilitate repairs. I reported in, told him I wasn’t quite ready, and rushed to attend to my armor as fast as I could sprint. Despite getting back while everyone was still saddling up, I got the notification that I’d “failed” that part of the mission. Henry remarked that he hoped the quest giver “wouldn’t be too upset with me” as I rode next to all of them to the village. This is a common occurrence and one that needs patched out. If you are on a mission and you stop to talk to someone, you’ll fail the mission you are on. If you deviate from the stated objective in even the smallest of ways, it’s a failure. I can see that the team wanted to use this mechanic to enhance the “living and breathing world” angle, but in practice it tends to lock down your actions in direct opposition to the freedom of the rest of the game.

Kingdom Come: Deliverance is equal parts amazing and challenging, with a small dash of unfinished frustration. The world that Warhorse has built is dirty, unforgiving, brutal, and easily one of the best open world RPGs on the market. The game’s unflinching dedication to its representation of the horrors of medieval life pulls you in and demands your attention. The occasional bugs mar the experience, but Kingdom Come: Deliverance is a must-have for any open world role playing game fan in search of something unique.

Ron Burke is the Editor in Chief for Gaming Trend. Currently living in Fort Worth, Texas, Ron is an old-school gamer who enjoys CRPGs, action/adventure, platformers, music games, and has recently gotten into tabletop gaming. Ron is also a fourth degree black belt, with a Master's rank in Matsumura Seito Shōrin-ryū, Moo Duk Kwan Tang Soo Do, Universal Tang Soo Do Alliance, and International Tang Soo Do Federation. He also holds ranks in several other styles in his search to be a well-rounded fighter. Ron has been married to Gaming Trend Editor, Laura Burke, for 21 years. They have three dogs - Pazuzu (Irish Terrier), Atë, and Calliope (both Australian Kelpie/Pit Bull mixes).
Related Articles: Kingdom Come: Deliverance, Let's Play
Share
Tweet
Share
Submit