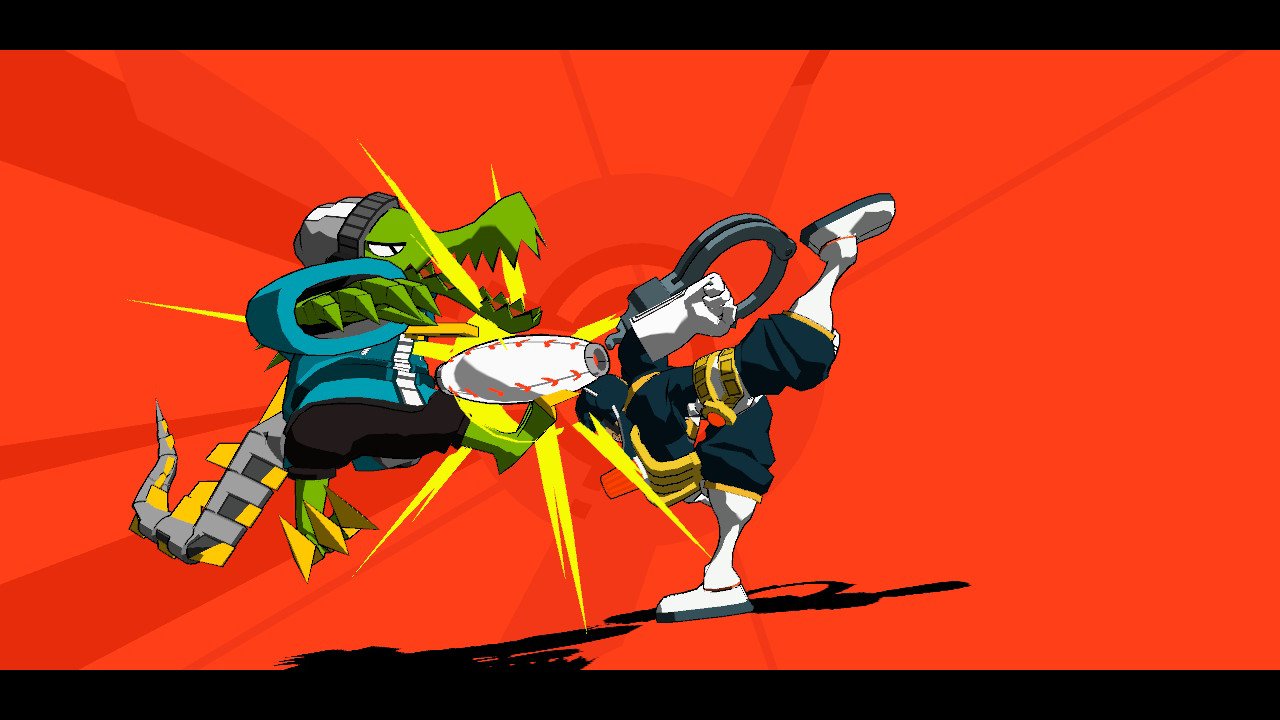 I’ve been a fan of short but fast-paced games recently, if my review of Duck Game is any indicator. The competitive yet simple nature of these titles really makes all the difference, and these experiences are usually seamless in their framerates and technical performance. Enter Team Reptile’s Lethal League Blaze, the long awaited sequel to 2014’s cult hit where baseball meets Smash Bros. and Jet Set Radio. While the core gameplay is excellent with a ton of new features, the Switch version of the game might leave a lot to be desired. 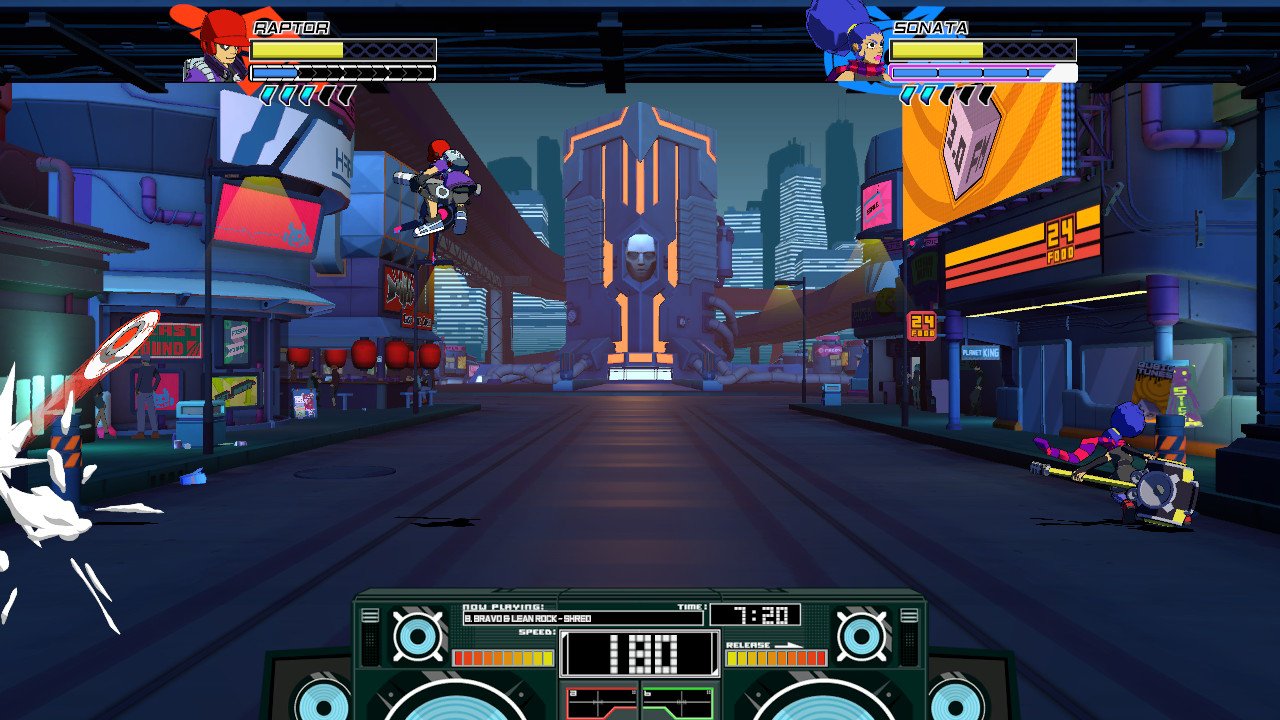 Lethal League Blaze is set in a place called Shine City, where an illicit sport called Lethal League is held. Due to an incident where someone died, players involved in the sport have to escape from the local authorities to play. Of course, spending any amount of time with it, you understand why: It’s a no-holds barred competition that feels like a modified version of baseball and table tennis on steroids.

Players will have to hit a ball as it zips around the stage, with unlucky players getting hit and losing health. Your goal is to defeat your opponents with the ball, which is the only thing capable of dealing damage in this game. With each hit of the ball, it gets faster (as indicated from a boombox at the bottom of the screen), and eventually it will reach a speed where a hit will prove fatal. Your only defense is by smacking the ball, bunting it, or throwing it, and you can choose your trajectory when you do hit it. Along the way are powerups that can be distributed on the top of the screen sporadically which will cause some crazy things to happen to the ball, whether it be a football that zips around unpredictably or a healing ball that will heal you for as long as you can hold it.

Lethal League Blaze seems simple enough, but it’s the high-stakes buildup that really sets the stage for some crazy matches. You have a set amount of lives, and health carries over between rounds (known here as bursts). Much like Super Smash Brothers, you’ll have to make decisions on if you should pursue a ball and risk getting hit or play it safe and try to predict where the ball will land. However, your opponent can just as easily create their own rally and make the ball faster, which requires some quick thinking and a great strategy. 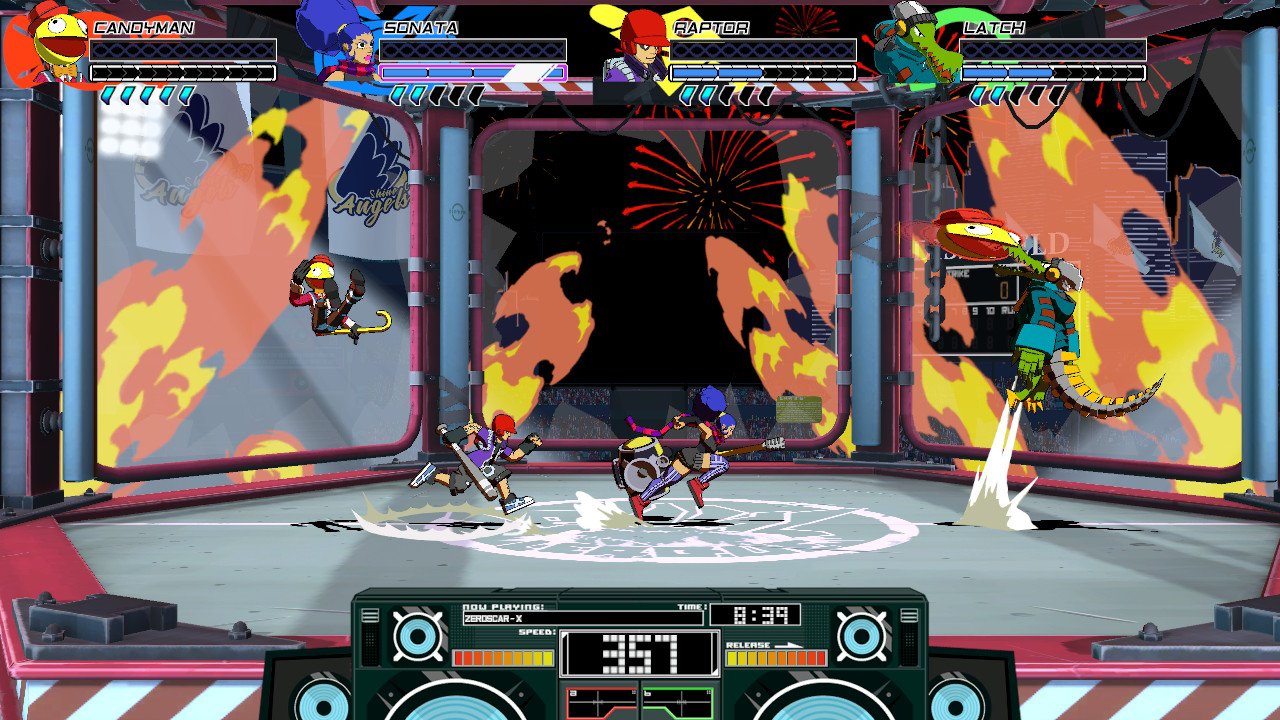 While you can mash buttons to try and make a hit, both you and your opponent can choose to parry, which can negate the effects of a hit if timed properly. A lot of these advanced techniques are easy to explain but extremely hard to master, which makes this an unorthodox candidate for a fighting game. It’s an interesting core gameplay loop that rewards very risky behavior, and it can get frantic extremely quickly. Luckily, the controls are sharp and responsive, and you won’t have to worry about an incorrect input with how simple directions are. Dodge and hit, that’s all you need to do.

Luckily, the game’s style matches the pace of the experience. The whole game exudes a quirky, distinct aesthetic much like Jet Set Radio or Splatoon, and it fits well with the retro/futuristic narrative the game is aiming for. You have a cast of 11 characters, which might sound small, but each contestant is unique in terms of their special moves. From loveable crazy dude Candyman (who wields a pretty neat cane and can allow the ball to move past walls) to newcomer Jet (who can use rockets to float as well as use a bubble to stop the ball in its tracks before popping and continuing its assault on opponents), there’s something to love for everyone. In addition, the boss character Doombox (read: the boombox I talked about earlier) is now officially playable, complete with revamped moveset and a killer special move that makes the ball act as a homing device. 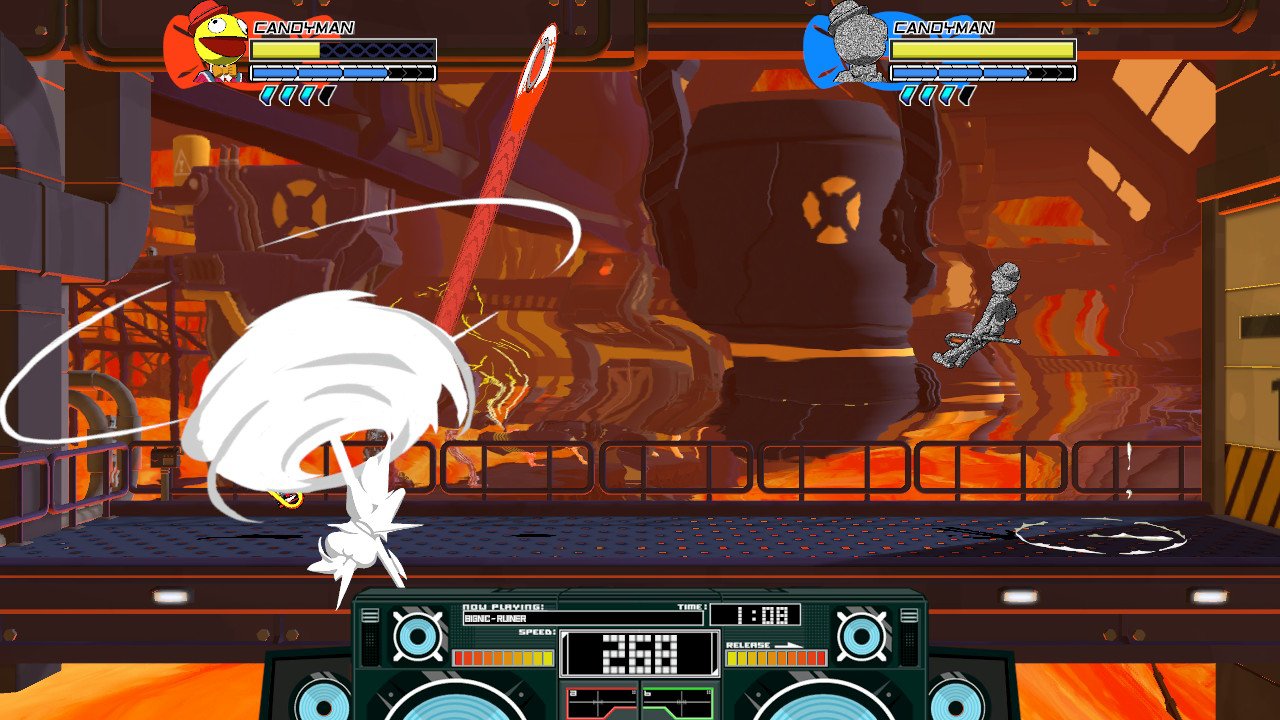 It’s here that I’ll give a brief shoutout to how adequate the story mode of Lethal League Blaze is. While it’ll only last around an hour or two, it’s a great introduction for those who need a little practice before delving into the other modes. While a bit lacking in presentation (after all, these are text-only cutscenes), the fact that you can usually play as both sides of a conflict and get the backstory of Shine City is pretty neat. I found all I needed to know about the characters here, and it ties up the backstory of Lethal League pretty nicely. The characters all have some screentime here, and while they’re only voiced through in-game grunts or taunts, there’s still some personality for each of them. 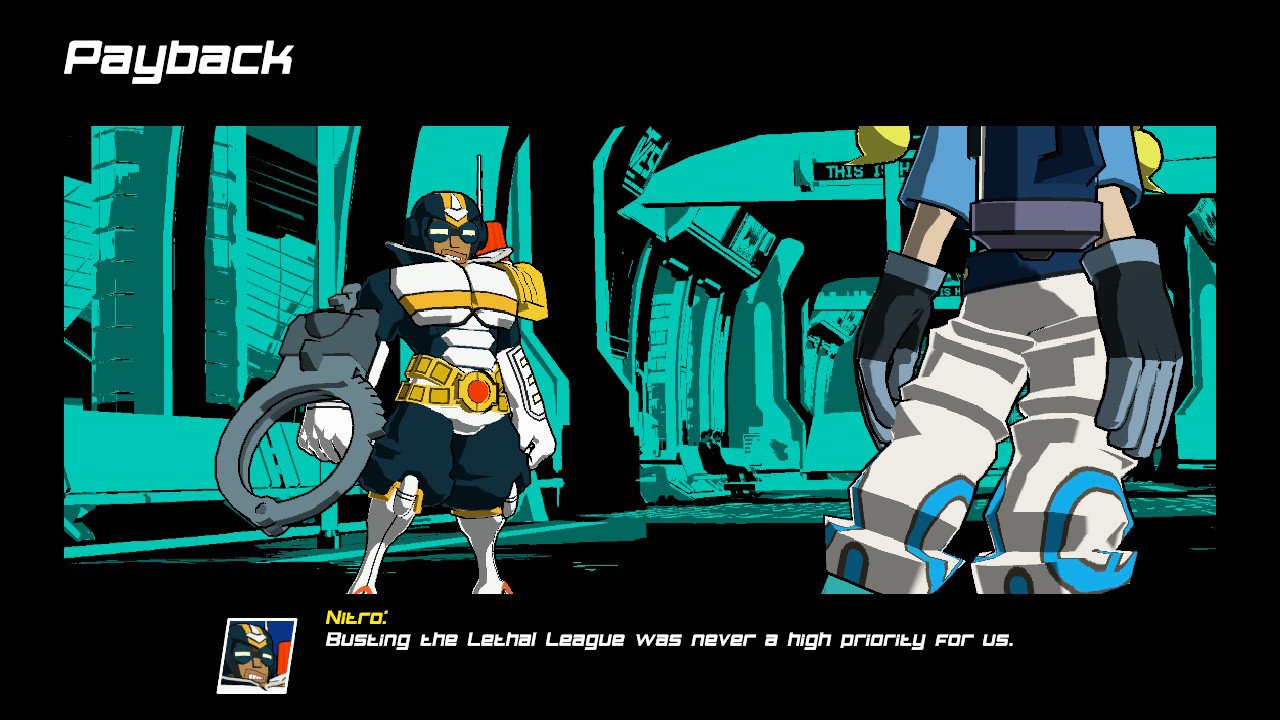 The lovely character designs are all graced with some slick trance and EDM-inspired tracks, the standout being Jet Set Radio composer Hideki Naganuma’s Ain’t Nothing LIke a Funky Beat. Ordinary Days was a nice chill track, and there are some pretty good ones that fit the mood of the game quite well. In addition, there are some modes that you can try for practice, with an arcade “face everyone or die trying” ladder structure here. There are quite a few unlockables, from characters to stages to skins, and in-game currency is awarded generously enough to make progression feel rewarding rather than grindy. I love the overall amount of content here, and it’s a pretty awesome offline experience.

However, there are a couple of glaring issues that really hold Lethal League Blaze back on the Switch. For one, the online mode is rather odd; the 1v1 mode is perhaps the greatest strength of the game, but you can’t do this mode in a quick game. It’s either free-for-all or team battles with four players, and while I do love the chaotic nature of the game, having four players on screen can really be a bummer for something of this nature. The ball is too random in free-for-all and players are running all over the place, which causes some rather cheap deaths when playing. Team battles mitigate the problem a bit since you only have to focus on hits two opponents make rather than three, but the fact that they’re the default and you can’t choose the better mode here is rather sad. From my experience, I couldn’t even do this in a lobby, so limiting modes in the online experience hampers the competitive aspect of the game. 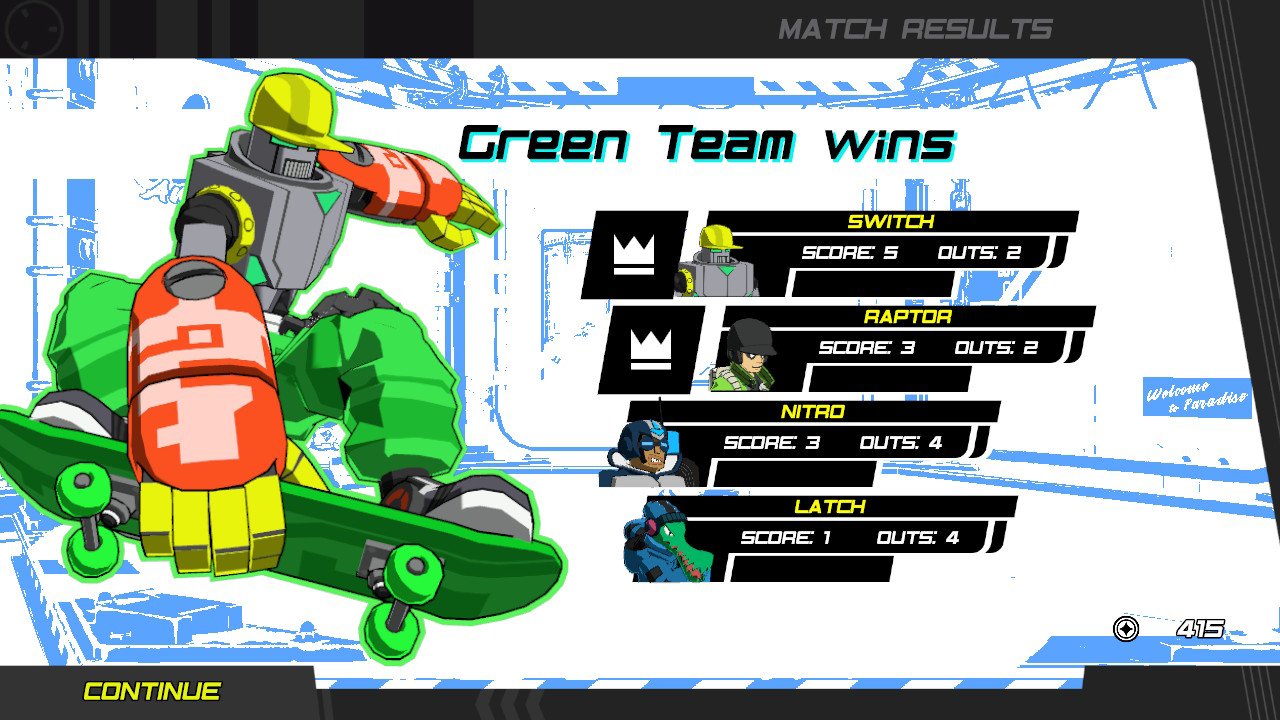 Finally, the technical performance of the game is probably the worst out of the console versions. While this is to make concessions for the fact that this needs to run in handheld, there were many times when I suffered framerate dips with multiple characters on screen, moreso in handheld mode (where the gameplay is locked at 30 FPS if not on the television). One stage consistently made the game run pretty slowly (so much so that I avoided it whenever I played casual games with a friend), and even in docked mode, the graphical downgrades are noticeable. I wouldn’t say it makes the game unplayable, but it’s a big deal where handheld performance is concerned. While my review score will reflect how I feel about these cons, I would definitely recommend buying it on another console if you’re worried about performance issues.

Lethal League Blaze is an excellent game for the competitive crowd, but it’s a bit hard to recommend on the Switch over other versions. The eccentric character designs, great soundtrack, and blazing-fast gameplay are charming, but the performance issues and online gripes means this version falls short from being a masterpiece

Elisha Deogracias is an aspiring accountant by day, freelance writer by night. Before writing for Gaming Trend, he had a small gig on the now defunct Examiner. When not being a third wheel with his best friends on dates or yearning for some closure on Pushing Daisies, he's busy catching up on shonen manga and wacky rhythm games. Mains R.O.B. in Smash. Still doesn't know if he's a kid or a squid.
Related Articles: Indies, Lethal League Blaze
Share
Tweet
Share
Submit