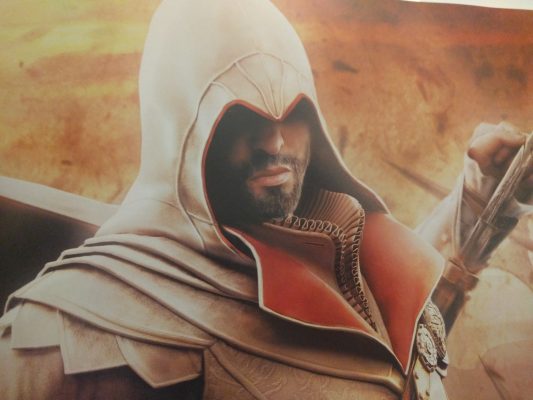 There’s no doubt that Assassin’s Creed has developed quite the storyline since the first game’s release in 2007.  From Pieces of Adam to Precursors, the game has always had a bit of a strange slant in its connection to the modern world.  Rather than relying on a publishing house like Dark Horse, Prima, or Titan, Ubisoft has stepped in personally to set the record straight in their oversized 216-page hardbound book entitled Assassin’s Creed: The Essential Guide.

A little more information about the mysterious Precursors.

Everything is Permitted
The book spans seven chapters, starting with an introduction and the Precursor Civilization, and progressing all the way to modern assassins. Before digging into the future/past mysteries of the Precursors, the game provides a very comprehensive history at both the Assassin and Templar Orders.  Including their creeds and belief structures, this introduction gives a brief overview of who the groups are, what they stand for, and why they believe the other side is at fault for the woes of the world.

Before kicking off the second chapter regarding the Precursor’s Civilization, the first chapter closes with a comprehensive timeline from beyond 75,000 BCE in the past, all the way up to 2012 CE — the present, for the series.  Like much of the reading material that is provided as background within emails and side content reading, this timeline provides not only a full account of all of the games, it also provides a platform for fan speculation for where the series goes next.  Will the story chronicle Assassin Darius, the first user of the hidden blade in 465 BC?  Could we experience 1977 CE when Assassin William Miles steals the Abstergo blueprints to build his group’s own Animus?  The book doesn’t answer the question, but it does provide plenty of fuel for fans to guess for themselves.

From humble beginnings, all things spring.

Throughout the series, we’ve come to know Juno, Minerva, Durga, Jupiter, Aphrodite, and other precursors, but there are large gaps in what is known about this ancient mysterious race otherwise known as The Isu.  If you had forgotten that they were called The Isu, then this guide is precisely what you need.  With in-game shots, pictures from the comics, and gorgeous concept art, the book reveals stuff that I’d somehow missed, even having played all of the Assassin’s Creed games from start to finish.  It’s a great primer and a gorgeous showcase of the Ubisoft team’s art skills.

The Assassin’s Creed
While any fan can likely recite the words of Ezio Auditore, how many know the actual tenets of Brotherhood?  The third chapter dives deeper into the origins of the Assassin Brotherhood, including its structure, training, iconic weaponry, and even the evolution of the Brotherhood’s crest insignia.

The second half of the chapter is absolutely fantastic.  Every assassin brotherhood leader from Altaïr Ibn-La’Ahad in 1165 to Nikolaï Andreievich “Kolya” Orelov in the early twentieth century, and everyone in between is included.  Ezio Auditore, Shao Jun, Edward Kenway, Adéwalé, Aveline de Grandprém, Ratonhnhaké:ton (Connor), Arno Dorian, Jacob and Evie Frye, and even Arbaaz Mir are all represented with two full pages of gorgeous artwork, a full dossier, their affiliations, and a whole lot of background.  It’s a real highlight, as well as a walk down memory lane.

Beyond the assassin dossiers is a look at the allies and fellow assassins that run periphery to the main threads.  Famous people from history such as Leonardo Da Vinci, Maria Thorpe, Lorenzo De’ Medici, Charles Vane, Sam Adams, and many others get roughly a paragraph each, as well as the same mix of artwork, comic panels, and in-game screenshots to fill in the supporting roles.

The Templar Order
As awesome as the chapter on the Assassin’s Order is, we know that story pretty well.  Chapter 4 focuses on the other half of this centuries-old conflict — the Templar Order.  Pulling back the cloak of shadow on the Order, the chapter opens with a full rundown of Inner Sanctum members, the structure of the group, and even the swearing in ceremony for new members.  Like the Assassins, the Order has its own heroes.  Robert de Sablé, Rodrigo Borgia, Cesare Borgia, Prince Ahmet, Baptiste, Haytham Kenway, Élise de la Serre, Lucy Thorne, and others get in-depth exposure, as do their confederates and supporters.  Despised, this rogue’s gallery bring back memories of tough fights and crazy conspiracies, and is easily one of my favorite parts of the guide.

Sequence 5: Technology
The premise of Assassin’s Creed has been memories extracted from the DNA-rooted memories of assassin ancestors.  Courtesy of the Animus, the Abstergo company has expanded their reach globally with their Helix cloud-based software.  Pulling in the public with entertainment products, they’ve successfully infiltrated the mind of players with their newest product, Brahman VR.

Like the chapter on the Precursors, this section provides a detailed timeline on the Animus and how it has evolved into the insidious product of today. Masquerading as a training program, it also showcases the fantastic multiplayer using the in-fiction Animi Training Program.

Beyond the multiplayer tie-in, the book also gives us a view into the previous subjects of study (e.g. we know Desmond Miles is Subject 17, but who was Subject 1?), as well as the painful side effects suffered by the testers such as brain bleeds and schizophrenia.

If there is a signature weapon that every Assassin possesses, it’s the wrist blade.  The earliest iterations required the user to sacrifice their ring finger to use it.  Later iterations, courtesy of Altaïr and a Piece of Eden, changed the mechanical design, including the trigger mechanism and no longer required the removal of a finger.  The iconic weapon has evolved over time, being paired with a twin, coupled with various swords, and even adding things like shock capability, miniaturized firearms, and a variety of poisons.  The book spends a few pages on this evolution, as well as the ancillary technology of the series such as Leonardo’s flying machine, bombs, the hookblade, and cane sword, just to name a few.

I’m one of the fans who thinks that Assassin’s Creed needed an entire game devoted to naval battles, so I was happy to see a few pages entirely focused on the ships in Assassin’s Creed Black Flag and Assassin’s Creed Rogue.  The Jackdaw, Morrigan, and Aquila bring back fond memories filled with tense naval maneuvers and hearty sea shanties, but the book also describes a ship called the Altaïr II.  The Altaïr II is a modern combat patrol boat that is used as a mobile Headquarters in modern times in Assassin’s Creed: Initiates – a side product released at the same time as Assassin’s Creed Unity.

Time and Place
If there is one heavily-debated item ahead of an Assassin’s Creed announcement, it is the location.  Bouncing around the globe, there is no doubt that the series has taken us to amazing times and places in history.  England, The Caribbean, Prague, Italy, Spain, Russia, and many other places are represented in a timeline that can be aligned with the games in the series, with many of them receiving a multi-page description of what Templar and Assassin actions were carried out there, as well as in-game screenshots or artwork

Love the in-depth analysis of technologies.

Modern Day
The final chapter in Assassin’s Creed: The Essential Guide focuses on modern day.  Nearly every game features some modern-day tie in, some playing a larger role than others.  Focused heavily on Abstergo and its evolution from the 70s to modern day, this chapter also gives a window into possible future technology we might see in the next game.  The Bodyband (a wearable fitness tracker), Herne+ Line (a monitored nutrition-release system), and the Angelus implant for children (monitoring their health) all sound equal parts plausible and terrifying.

The real-world parallels are kinda scary.

Like their historical counterparts, this chapter gives a full dossier on the Templars and Assassins of modern day.  Much of their backstories are contained in the excellent Assassin’s Creed graphic novels, as you can see in our reviews.  The roster includes Galina Varonis (the mysterious defender from the end of Assassin’s Creed Syndicate), Bishop (the person responsible for doing the worldwide coordination of the Brotherhood), Clay Kaczmarek (a copy of his personality helped Desmond navigate his brain bleed issue at the end of Assassin’s Creed 3, and disgustingly, it’s his blood you find on the walls in the first Assassin’s Creed), and many others.

The final section of the book is a little meta, and that makes it more than a little awesome — the real world.  Cosplay for Assassin’s Creed (with several incredible examples), fan artwork, live events and meetups, and even fan-made videos round out the book.  Arin Murphy-Hiscock pulled together some fantastic material using her two-decade-long connection with the Ubisoft team.  If there was anything that surprised me about this comprehensive guide, it’s how much new artwork I found inside.  I’ve reviewed quite a few art books on the series, and I was happy to find a lot of artwork and information that I’d not seen before.  Assassin’s Creed: The Essential Guide is a must-have for any fan of Ubisoft’s flagship property.

These cosplay examples are fantastic, and not even the best of them!

Assassin’s Creed: The Essential Guide is as comprehensive a guide as you could want. Featuring beautiful artwork, detailed background, and enough information to stitch all of the sometimes confusing storylines together, this book belongs on the shelf of any would-be Assassin or Templar.

Ron Burke is the Editor in Chief for Gaming Trend. Currently living in Fort Worth, Texas, Ron is an old-school gamer who enjoys CRPGs, action/adventure, platformers, music games, and has recently gotten into tabletop gaming. Ron is also a fourth degree black belt, with a Master's rank in Matsumura Seito Shōrin-ryū, Moo Duk Kwan Tang Soo Do, Universal Tang Soo Do Alliance, and International Tang Soo Do Federation. He also holds ranks in several other styles in his search to be a well-rounded fighter. Ron has been married to Gaming Trend Editor, Laura Burke, for 21 years. They have three dogs - Pazuzu (Irish Terrier), Atë, and Calliope (both Australian Kelpie/Pit Bull mixes).
Related Articles: Assassin's Creed: The Essential Guide
Share
Tweet
Share
Submit