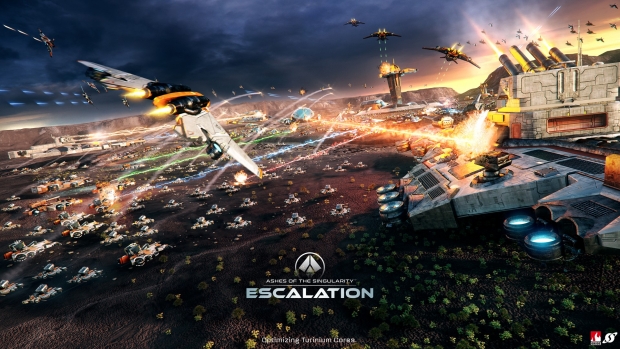 I had some high praise for Ashes of the Singularity seven months ago, but noted that there were some weakness in the campaign mode. I also found the some of the units and base building lacking. The team at Stardock are known for making incredible strategy games, but they are also known for listening to their fans. Built as a stand-alone expansion, Escalation looks to tackle our complaints with the base product and more. With a story-driven campaign, some spruced visuals, and a few more technological bells and whistles, could this be the shot in the arm this global warfare battler needs?

Stardock CEO Brad Wardell freely admits that the original plan for Ashes of the Singularity didn’t involve a single-player campaign, knowing that the meat and potatoes of most RTS games is in its multiplayer. At the last moment, the team put together a short campaign and included it at launch. Fans felt it was just a little too short and didn’t do enough to pull players into the world or the rich backstory Ashes was offering. This expansion brings not one but two new full campaigns, entitled Escalation and Memories.

Before we dig into what’s new, calling this a standalone expansion is a bit of a misnomer. Escalation is actually a replacement for the base product. If you picked up the base game, you can snap up this stand-alone escalation for $19.99, or $39.99 for those who didn’t. Escalation contains the two new campaigns, but it also has the original shorter single player missions, Imminent Crisis.

The first campaign, entitled Memories, starts directly after Imminent Crisis. Haalee, the first stable and benevolent post-human Coalition-aligned AI, is helping humanity fight the splinter group, Prion. As humanity finds itself on its heels once again, it unleashes Haalee on their enemies. The AI, knowing that she needed remote actors, births a second AI named Athena with the sole purpose of destroying the enemy. I’m sure only good can come from this.

Escalation, the larger of the two campaigns with nine missions, is the extension of Memories. I don’t want to spoil it for you, but naturally everything goes sideways and a new threat emerges, tailing Haalee and her digital progeny across the galaxy. Starting off with an incredible “Ender’s Game” type CGI intro, the production quality of these new missions makes it clear how much they want to fill this gap.

I did run into one issue on pre-release code. One one of the Memories missions I found myself struggling with the population limit mechanic. For reasons I won’t ruin, you end up with (potentially) dozens of Dreadnought ships, preventing me from building any constructors to shore up my assault. Conversely, the other missions in the campaigns were well-balanced and challenging without any other hitches. There’s still time for some tweaks, so it’s possible this one mission could be rebalanced by launch or shortly thereafter.

I crashed my troops against these gates repeatedly.

One area I thought was lacking in the original release of Ashes was defensive structures. I tend to be a ’turtle’ player, reinforcing my base to ensure that I can mobilize my entire army and still hold down the fort. Ashes didn’t have enough base defense structures to properly do this, requiring that I always had a token force at home, splitting my army between defense and offense. Escalation brings with it new defensive structures such as the Eliminator and the Constable. Better yet, you can now upgrade structures, turning the fairly weak ground-only Smarties into lethal armor piercing air and ground rocket structures. It creates an effective counterbalance for more slow and methodical players to get their feet underneath them without constantly fielding units.

If there was one thing I was surprised to see in Escalation, it had to be the addition of more players. The battlefield was already a cacophony of chaos at times, so seeing Stardock push up to 16 players on even larger maps was unexpected. As Ashes is, at its heart, as much a combat strategy sim as it is an economic one, adding additional players makes the fight for precious resources that much more vicious.

Unleash the harvesters and steal resources from your foes

The PHC and Substrate have both received not only new units, but also a fresh coat of paint. Units like the Brute were visually retooled, eschewing the boxy traditional tank look for a more futuristic and angular profile. Of the nine new units, the Strategic Bomber, was the highlight of my battlefield. An aggressive anti-structure assault unit, this bomber wipes hardened emplacements off the map with little effort, as long as you can flank it with other units to keep it safe. Similarly, the Substrate Caregiver prolonged the capabilities of my units, healing them and restoring their shields — valuable for my more expensive ships.

Beyond the units and upgrades you might expect, Escalation also brings a semi-stealth element to the table — the Saboteur and the Sapper. Directly comparing to StarCraft, this is the equivalent of a lower-powered Scarab drop, teleporting a small skirmish force anywhere you can see on the map. It changes some of the dynamics of multiplayer, and it’ll be cool to see strategies form around all of these new units.

Setting up Quanta collectors allows you to expand the maximum size of your army, but Escalation brings a host of new skills to augment your assault. Armor bonuses for all units in an area, a small turret drop to help secure an area, the aforementioned Sapper/Saboteur units, and more make Quanta feel more useful. It creates a risk/reward as you have to decide between short-term immediate gains and a healthy growth rate for your army.

The maps in Escalation have gotten a shot in the arm. The largest map in the original was 72km, which was already leaps and bounds larger than anything else in the genre. Escalation lives up to its name, pushing up to a massive 96km. To handle the larger play space, Stardock has given us a new way to manage our global warfare — Strategic Zoom. Strategic Zoom pulls the view back even further, providing a tactical view that allows players to fight even further above the fray. This new layer of abstraction lets you easily see the layout of the resource interconnections and your army designations. It seems like a minor thing, but this was a tipping point for me. As my armies grew, I ended up using the Strategic Zoom more frequently. I felt more in control of this global behemoth than I did in the original game.

Ashes of the Singularity: Escalation

Well beyond simple DLC, Escalation polishes every aspect of the base game. The campaign is excellent, and the expansion of defensive and upgradeable structures helps ease in new players. New technology amps the scale, but also provides tools to manage the larger world. Ashes of the Singularity: Escalation is a fresh coat of paint for an already-revolutionary RTS.

Ron Burke is the Editor in Chief for Gaming Trend. Currently living in Fort Worth, Texas, Ron is an old-school gamer who enjoys CRPGs, action/adventure, platformers, music games, and has recently gotten into tabletop gaming. Ron is also a fourth degree black belt, with a Master's rank in Matsumura Seito Shōrin-ryū, Moo Duk Kwan Tang Soo Do, Universal Tang Soo Do Alliance, and International Tang Soo Do Federation. He also holds ranks in several other styles in his search to be a well-rounded fighter. Ron has been married to Gaming Trend Editor, Laura Burke, for 21 years. They have three dogs - Pazuzu (Irish Terrier), Atë, and Calliope (both Australian Kelpie/Pit Bull mixes).
Related Articles: Ashes of the Singularity: Escalation
Share
Tweet
Share
Submit