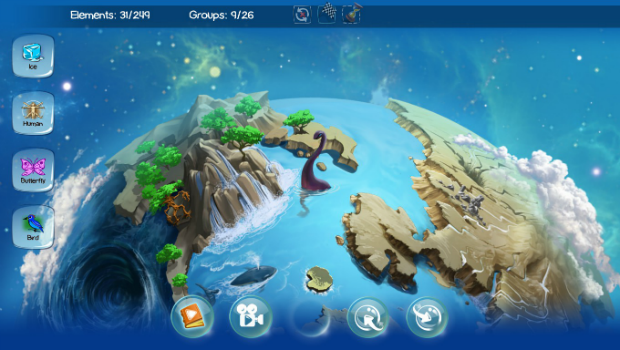 Deify me if you must, video game, but I don’t necessarily see myself as a God for simply creating the universe.  Perhaps when that doodled fire came near that doodled earth, the resulting doodled lava was not the intent of some benevolent Doodle Deity, but rather the result of years and years of Doodle Coincidence.  Perhaps it is foolish to wax theological, if not only for the reason that wax is a terrible substance to draw doodles with.  Wax has other uses though, and you’ll be sure to find them in Doodle God, an element combining game with creation as a central theme.  Whether you believe in coincidences or you want to teach the doodle controversy, you can’t go wrong with the light and cerebral fun of Doodle God.

Doodle God has been around on mobile devices for some time, and the game takes the style from other games that have existed for years.  The first such instance of this style of game of which I am aware is “Alchemy” which existed as a DOS game and made some resurgent headway on the Android market.  Doodle God takes what Alchemy set up and runs with it to some mild success.  With Doodle God you start with some rudimentary elements such as Earth, Fire, Water, and Air.  Combining these elements will create new elements which can then be combined to create more and more elements, and so on.  The object of the game is to create all possible combinations and create the living world on which we exist today.

The game starts with basic creations such as humankind, animals, plant life, and other early Earth evolutions.  As you progress through the levels you are able to create more and more modern and specific creations.  You combine elements by selecting two from a category and either dragging them onto one another, or simply clicking both.  You will see the results if you are correct, and are given a quick indicator if the combo is wrong.

Doodle God cleans up some of the problems with past games of this style.  Instead of forcing you to place the items you think will combine on the screen, Doodle God categorizes them for you and allows you to select them from the list.  This cuts down on excess time spent in a menu and streamlines combo searching, which you will find can be a time consuming and frustrating ordeal.

Where Doodle God fails is in finding a remedy to the ultimate drag that comes with all games of this style.  Eventually you are just simply going to run out of ideas, and you may spend 20-30 minutes searching for a combo that never comes.  The game provides you with a few hints, but they are often few and far between (unless you want to pay a little cash for some help).  Even then, the hints aren’t always very helpful.  Any casual players or new players to these games may be turned off simply because of a sudden and sharp decline in fun and action.

Doodle God is able to make improvements on the monotony of these games, however, by creating some very interesting and dynamic game modes aside from the main game itself.  You have a story mode, where you have to take on certain tasks like creating presents for Christmas guests, or saving a princess from a vile dragon.  There is a puzzle mode that gives you a set number of elements and forces you to find the right path to a specific element.  Lastly, there is a very fun tournament style mode where three online players try to solve three quick combos, and points are awarded to the quickest to answer.  A leaderboard charts the points for all players and rewards are given for the leaders in the form of hints.

The game does also boast a very nice look and feel.  All of the menus are streamlined and very easy to navigate.  The icons and graphical design of the game is very pleasing and sharp.  There is a “globe” that adapts to your creations that is a very cool and simple idea that gives some reward for progression.  There is a decent little soundtrack to the game, but it is not particularly noticeable.  The worst feature of the game is the disembodied voice that chimes in when you get a combo correct.  He has a few phrases but he uses “Gracious, me!” almost 75% of the time.  It sounds like you’re shocking some square, milquetoast loser every time you manage to get a combo, and it gets very annoying after just a few instances.

Doodle God is a port of a mobile game, and carries with it the same simplicity, microtransactions, and limited but continuous fun that many games of the platform boast to the PC. The game presents the most streamlined and deep version of a combo finding puzzle game to date, and overcomes some drawbacks to be a solid and playable title.

Patrick Rost has been with Gaming Trend since 2013. At first focused on sports coverage, Patrick has gone on to cover a wide range of games and other products for the website. Outside of Gaming Trend, Patrick writes and records music, grinds perpetually in Elder Scrolls Online (PS4), and lives day to day with his two dogs, Bob and Stella.
Related Articles: Doodle God
Share
Tweet
Share
Submit