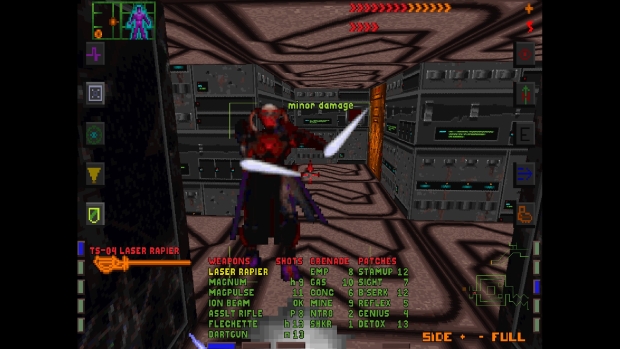 “L-l-l-l-l-look at you, hacker. A pa-pa-pathetic creature of meat and bone.”

If that sentence gives you chills up your spine, then you’ve played System Shock. A mix of cyberpunk, horror, and virtual reality sensibilities, it’s fondly remembered by those who played it when it was released in 1994. Younger generations haven’t gotten the chance to look at this game due to the difficulty of running it on modern systems, not to mention finding a copy these days would be a difficult task. With the development of System Shock: Enhanced Edition by Night Dive studios, those who missed out on this classic can get a glimpse into how influential it was at the time, while those who did play it can relive those shivers.

The plot of System Shock mirrors several technology tropes of the time. A hacker is caught entering a network, but instead of going to jail he works out a deal to infiltrate the AI on Citadel Station and turn off its ethical constraints. It works, but leaves the hacker in a coma for six months. Upon waking up, the hacker discovers the station is practically uninhabited and needs to escape.

At first the controls take some getting used to. While mouselook has been included in the new version, at times you’ll need to move the cursor independently across the screen. Luckily, switching between the two control schemes is a matter of hitting the letter “E” at any time. The controls still feel a bit clunky, especially since you click on an object to look at it, double click to pick it up, and then have to click it in the right spot to add it in your inventory. However, after playing a while it will feel second nature. Just imagine you really woke up from a coma and your muscles are adjusting to the atrophy of being unused for six months.

However, the flexibility of movement included in System Shock puts even modern games to shame. Crawling on the floor, leaning to peak over a corner, and squatting to traverse small spaces are all possible. These positions also affect your perspective on the screen and your speed as well. Some of these features were going to be incorporated into the original Doom, but were left out to focus on the action.

While Night Dive has done what they can graphically, System Shock always suffered from gelatinous-looking enemies. While they have some extra definition to them, they look more like 2D sprites against a 3D background. While it’s not as bad as The Terminator Future Shock with 2D objects using the same single sprite no matter which direction you looked at them, the lack of texture and detail isn’t unnoticed. The being said, the backgrounds look great and move smoothly through the environments, even on older systems. The crisp text works great on newer monitors with higher resolutions, making all the information on the screen more readable.

By picking up audio logs, System Shock fills in the gaps of what happened between your hack job and your waking up from the coma. While you can get a sense of what happened from reading the dialogue, hearing the screams and terror in the voices of the staff of Citadel Station cranks up the tension. Hearing SHODAN with her sultry voice and Max Hedroom-like speech seizures gives her a personality that rises above a bad guy that kills without mercy. The original disk-based version didn’t have this voice acting, and I doubt that System Shock would have the reputation it has today without it.

Unfortunately the music and other sound effects don’t match the rest of the atmosphere. The enemies you fight don’t sound ferocious, and the mechanical beings resemble R2-D2 with the buzzing and beeps they have. While a score to resemble the situation during the game wasn’t easily orchestrated, it doesn’t convey the dread amongst the station. While it picks you up after a tough battle, letting you breathe a sigh of relief, it’d be nice if more effort could have been put into this portion of the game.

Getting around the station won’t be easy. When the station was created space must have been at a premium, with long hallways between rooms and storage areas. The maps can be dizzying and force you to backtrack through previously explored areas.

The weapons included feel familiar with a futuristic bent. You won’t be involved in the same type of firefights you are used to with large numbers rushing at you as in Doom, Serious Sam, or Call of Duty. Instead, the enemies are more methodical, coming at you one or two at a time, giving you a sense of relief before peeking around the next corner. The weapons have futuristic bent, allowing you to disable or destroy your enemies. They do have enough familiarity to them that they don’t seem to be too farfetched in this futuristic world.

Bringing back the 1990’s is the perception of cyberspace, almost coming straight from The Lawnmower Man. During these segments your consciousness flies through transparent tunnels from one area to the next, trying to grab floating objects that assist your hacking abilities before SHODAN discovers you and purges your consciousness back to your body. It would definitely be advisable to read the instruction manual about this part, and possibly crank down the difficulty for this portion of the game.

System Shock: Enhanced Edition doesn’t stray far from its roots, for better and for worse. Purchasing the Enhanced Edition includes the original version as well, enhancing this fact. If you can look at it through the lens of when it was created and get past the control scheme, you will find a satisfying experience and show younger gamers why System Shock was so influential to the gaming community.

While not working as a Database Administrator, Keith Schleicher has been associated with Gaming Trend since 2003. While his love of video games started with the Telestar Alpha (a pong console with four different games), he trule started playing video games when he received the ill-fated TI-99/4A. While the Speech Synthesizer seemed to be the height of gaming, eventually a 286 AT computer running at 8/12 Hz and a CGA monitor would be his outlet for a while. Eventually he’d graduate to 386, 486, Pentium, and Athlon systems, building some of those systems while doing some hardware reviews and attending Comdex. With the release of the Dreamcast that started his conversion to the console world. Since then he has acquired an NES, SNES, PS2, PS3, PSP, GBA-SP, DS, Xbox, Xbox 360, Xbox One S, Gamecube, Wii, Switch, and Oculus Quest 2. While not playing video games he enjoys bowling, reading, playing board games, listening to music, and watching movies and TV. He originally hails from Wisconsin but is now living in Michigan with his wife and sons.
Related Articles: System Shock: Enhanced Edition
Share
Tweet
Share
Submit