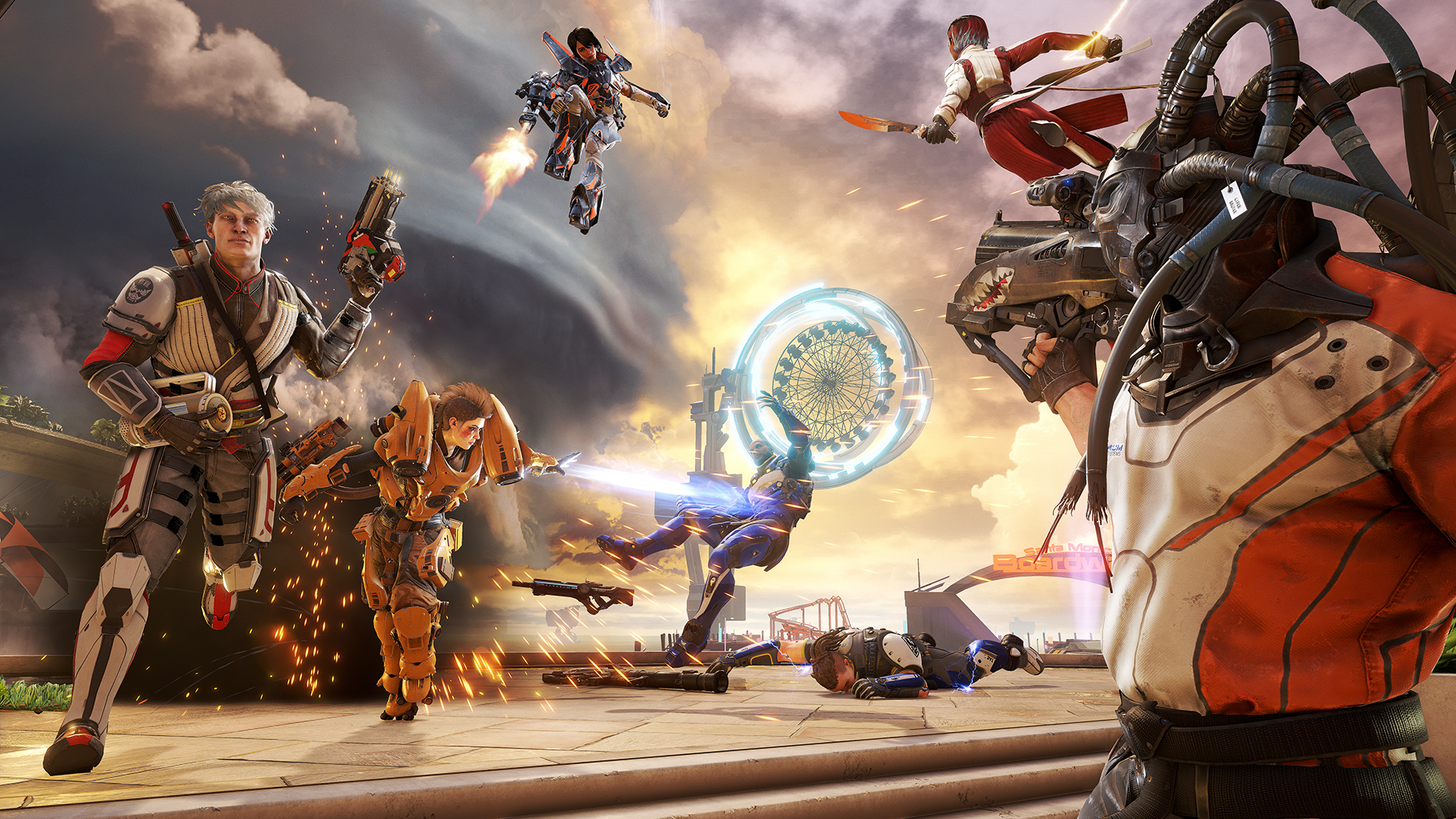 It’d be easy to dismiss LawBreakers’ slogan “Gravity Defying Combat” as sensationalized PR jargon. It is that, sure, but the phrase truly captures the essence of developer Boss Key’s debut game, a multiplayer-only, team-based shooter that takes traditional online multiplayer gameplay and tricks it out with low-gravity and nitrous oxide. Spoiler Alert: It’s a lot of fun.

In LawBreakers, players pick from nine class types and compete in objective-based combat against an enemy team. At launch, the game packs five unique game types, such as Occupy — a King of the Hill variation where the control point relocates after a certain length of time — or Blitzball — a Capture the Flag mode where teams fight to drop the blitzball in their enemy’s goal. These modes are familiar if you play a lot of multiplayer games, but LawBreakers blessedly differentiates itself in its speed.

Characters move exhilaratingly fast, especially in each map’s low-gravity hubs. In these areas, players sprint, fly, float, teleport and swing all around you, making these arenas wicked fun to throw down in. Admittedly, these zones can sometimes become overwhelming — not only are you contending with players in front of you, but also above you, below you and behind you — but they reinforce LawBreakers’ commitment to fast and furious action. Gravity is as much an obstacle in LawBreakers as your opponents — you can let the monster crush you, or you can learn how to tame it and ride it into battle.

Think actual Capture the Flag, but with players who’ve all had five cups of coffee before playing.

Combat might be exclusively objective-based, but if you’re a lone-wolf player like me, LawBreakers is still worth your time. I played without a microphone during my review, and while I occasionally lamented not being able to communicate with my teammates — strategizing with my squad would have been helpful in a game type like Turf War — it doesn’t matter if you have a mic or not, so long as your teammates play the objective. In fact, combat moves so darn quickly in LawBreakers, I can’t imagine how a team of fully-mic’d players would even begin to communicate with each other without the conversation devolving into half-sentences and quick shouts. LawBreakers is that fast.

LawBreakers is built entirely around its nine classes. The diversity spanning the classes is immediately apparent, and if you’re worried you won’t find a class that speaks to you, have no fear. If you enjoy sniper characters, The Gunslinger is a good pick for you, or if you enjoy playing a supporting role from the sidelines, Boss Key’s included a Battle Medic that can dole out as much damage as it can health. (I found I’m laughably terrible when I play the Juggernaut, but get me on the sticks as the agile and opportunistic Wraith, and I’ll cut right through the competition.)

Each of these classes is expertly nuanced, like the way the Wraith’s stab ability can be used to propel himself forward in low gravity, or how his slide ability can be combined with his stab to perform a deadly combo. Learning these nuances, like which characters are the best counter to the Harrier’s “shoc crocs” or how to shut down the Juggernaut when he pops his ultimate ability, is one of the game’s great joys.

LawBreakers only sports Quick Play and Custom Match features at launch, but even after hours of play, I never grew bored with its modest offerings. For its delightfully low $30 launch price, it’d be harder to justify not purchasing LawBreakers if you’re into online competitive gaming. There are microtransactions in the form of Stash Crates — like loot crates, but with mustaches — but appreciably, this isn’t a pay-to-win inclusion. Stash Crates yield purely cosmetic items, from weapon and character skins to spunky, shiny profile icons, and if you’re cheap like me, you’ll be content with the free crate you get each time you level up. Otherwise, go to town on your wallets, kiddos.

LawBreakers feels like combat occurring inside a snowglobe while a five-year-old shakes it really, really quickly. It’s a shooter, like so many others out there, but it doesn’t camouflage an axis-locked multiplayer formula with a new historical setting or gimmicky abilities -- its low-gravity environments and lightning-fast traversal make it like no shooter you’ve ever played.

Hunter Wolfe just graduated with his B.A. in Communication/Journalism from Shippensburg University and has nearly four years of professional writing experience. His content has been featured on sites like Rolling Stone's Glixel, Destructoid and The Artifice. You can check out his full portfolio at: www.hunterawolfe.com.
Related Articles: LawBreakers, Let's Play
Share
Tweet
Share
Submit