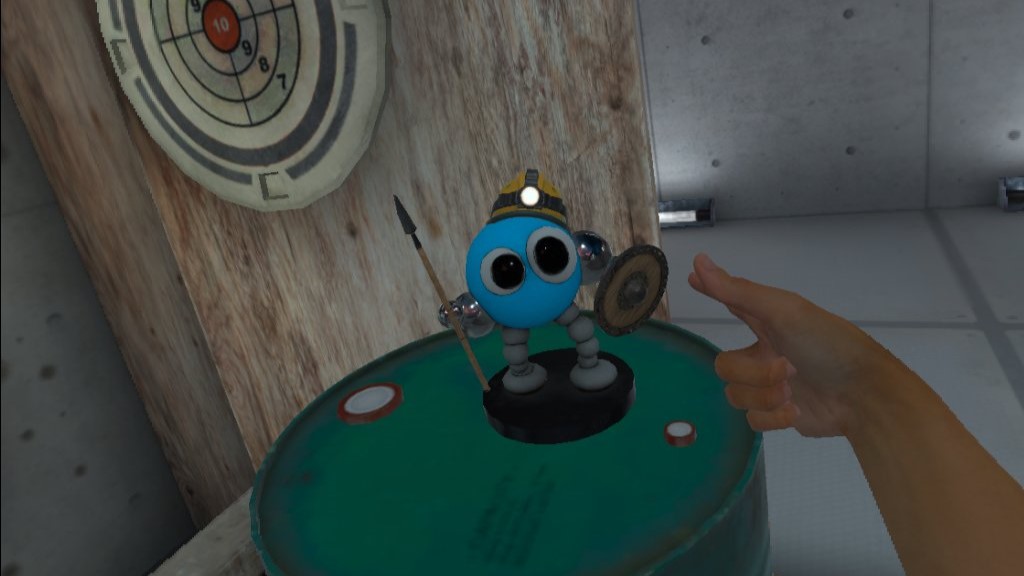 BONELAB attempts an incredible step forward for VR: full body physics simulation. This means you’re not just a floating head and some hands, you physically exist in the virtual environment more or less. You can pull yourself up ledges, move objects with just your hands, improvise a trash can lid shield to block bullets, and much more. It’s an amazing piece of tech and feels surreal and magical to experience for yourself. However, tech doesn’t make an interesting game, so is BONELAB actually any fun?

The game doesn’t waste much time getting you into things. After a short intro in which you choose a body by rolling a die (which is very unintuitive) you find yourself undergoing a village execution. After the floor collapses beneath you and the noose begins to choke you, a knife suddenly appears in front of you allowing you to cut the rope and fall into the hole. This is a pretty intense intro for an intense game, and is bolstered by notes scattered throughout the first level hinting that your character may be in a simulation gone too far.

Here you can actually get to grips with the controls, physics, inventory system, and gameplay. You move with the left analogue stick, jump by pressing and releasing A, adjust your standing height and crouch with the right sticks, and bring up the radial menu with B. There is no teleport movement option, so if you get VR sickness easily like myself, be prepared to only play about 20 minutes at a time (don’t quit the game in the middle of a level as there’s no telling if you’ll have to restart or not). It takes some time to get used to the movement, with your arms and legs sometimes getting stuck on things, and this struggle only becomes more frustrating over time.

The inventory system is a bit strange and is completely unexplained, so allow me to substitute here. You have a total of five Body Slots at various points on your person, with three represented by white circles in the inventory menu and two holsters for pistols. While you can only store small guns in the holsters, the circles allow you to store just about everything else either over your shoulders or behind your hips. For example, I kept a crowbar as my melee weapon and stored it behind the hips. To store it, you simply place the crowbar behind your hips and let go, the opposite to retrieve it. It took me about two levels to figure all of this out, and even then it would barely work most of the time, with the crowbar most often dropping to the floor when trying to store it, and trying to retrieve it usually having the game place my pistol or some ammo in my hand. 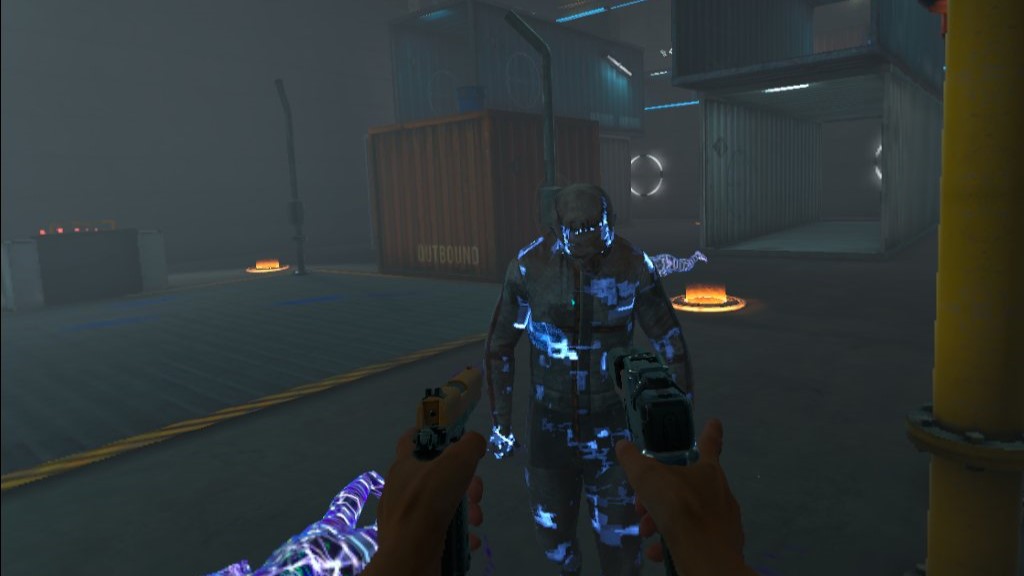 Grabbing things is also a bit strange and overcomplicated. You do have a very convenient magnetic grab by holding the grip button and the trigger at the same time, but that’s the only way to grab anything. If you want to retrieve your gun and shoot, you have to hold the grip button and trigger to get it from its body slot, release the trigger while still holding the grip button, and then press the trigger again to finally shoot. This is if your gun is already loaded, if not you also need to grab some ammo and insert it into the proper place, ready the gun by pulling on the slide, and THEN you can shoot. This reloading mechanic is very realistic, but is it fun? I’d say no for the most part. There’s a reason Resident Evil 4’s VR adaptation lets you skip pulling the slide by just pulling the trigger.

Conversely, the physicality of the game does make for some very memorable combat moments. While the game is mostly a shooter, abandoning melee halfway through the first (and sadly best) level, you still have the option to hit things. For example, I once exhausted a clip just as an enemy was getting uncomfortably close. I panicked and tried to pistol whip the foe, which actually killed them. That’s not something I could do in any other VR game! To test just how far I could push the game’s physics, I took a little blue figure whom I named Sir Elmo with me through the entire game with me. On top of being some adorable, chivalrous moral support, Sir Elmo and I were able to do some pretty cool and interesting things. He blocked a few bullets with his shield, and I was able to use his body as leverage to move some objects and even climb a ladder with one hand. This was just a stupid thing I decided to do and the game not only let me do it, I was somewhat rewarded for creative thinking. Granted Sir Elmo did make some things harder, particularly movement, but I would never abandon him. 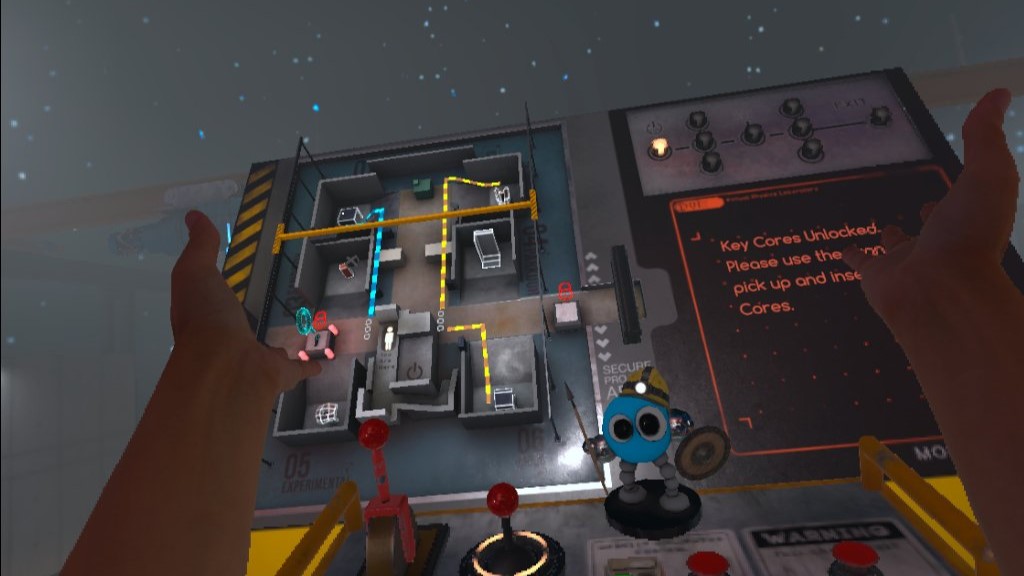 Sir Elmo and the occasional music track were my favorite things about BONELAB, because it started to tumble downhill after a fairly interesting first level. After finishing that stage, you’re thrown into the game’s hub with a bunch of minigames and no clue where to go next. I was stuck on this for quite a while and had to look up how to progress, which you do by playing at least three minigames and then using a crane to move the energy blocks that appear on their doorways to some pipes. This is just the first of some terrible puzzles and by the time I reached another in level 3 that also required parkour I was just done. There’s letting a lack of overt story create an air of mystery and discovery, and then there’s just refusing to help the player learn how your game works.

BONELAB is an incredibly interesting piece of tech with a terrible shooter holding it back. The physics barely work, the mechanics are cumbersome, and the puzzles are unintuitive and frustrating. There are a few moments where the combat can shine, but that’s not enough to make the game worth it.

David is the kind of person to wear his heart on his sleeve. He can find positives in anything, like this is a person who loved Star Fox Zero to death. You’ll see him playing all kinds of games: AAAs, Indies, game jam games, games of all genres, and writing about them! Here. On this website. When not writing or playing games, you can find David making music, games, or enjoying a good book. David’s favorite games include NieR: Automata, Mother 3, and Gravity Rush.
Related Articles: BONELAB
Share
Tweet
Share
Submit