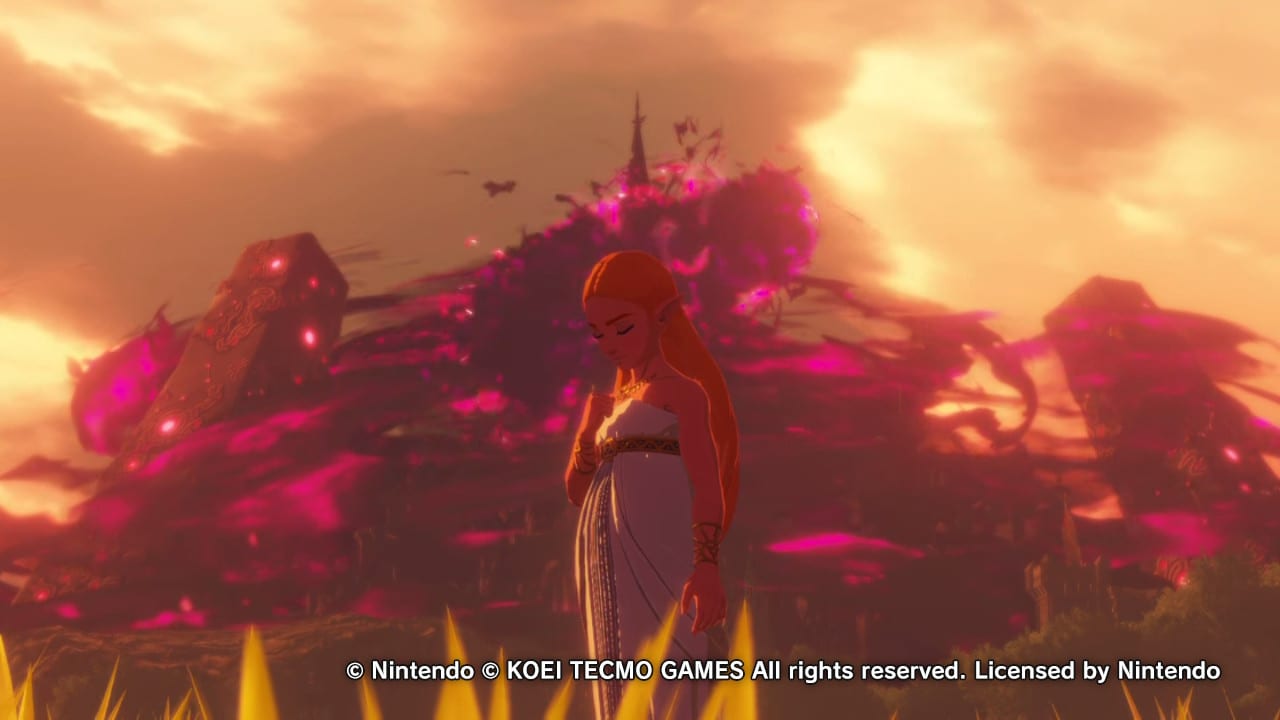 Hyrule Warriors: Age of Calamity is The Legend of Zelda: Breath of the Wild’s exact opposite. If the latter is somber, quiet, and contemplative the former is energetic, loud, and spontaneous. This contrast benefits both games, going back to BotW having played its cousin evokes memories of the battles that took place 100 years ago in the now ruined Hyrule, while playing AoC reminds you what happens to this vibrant place should Zelda and her allies fail to stop Calamity Gannon. While Age of Calamity is a prequel to the 2017 hit and can mostly be played without knowledge of that game, it is best experienced having finished Breath of the Wild.

Age of Calamity takes place a century before Breath of the Wild and depicts the Kingdom of Hyrule’s war against Gannon’s forces shortly before his revival. Link, Zelda, Impa, and the four Champions Mipha, Rivali, Daruk, and Urbosa join forces as they try to prevent the Calamity’s return and prepare to face it should the worst come to pass. Aided by a tiny Guardian robot from the future, can they seal Gannon away for good? Or will they fail once more? 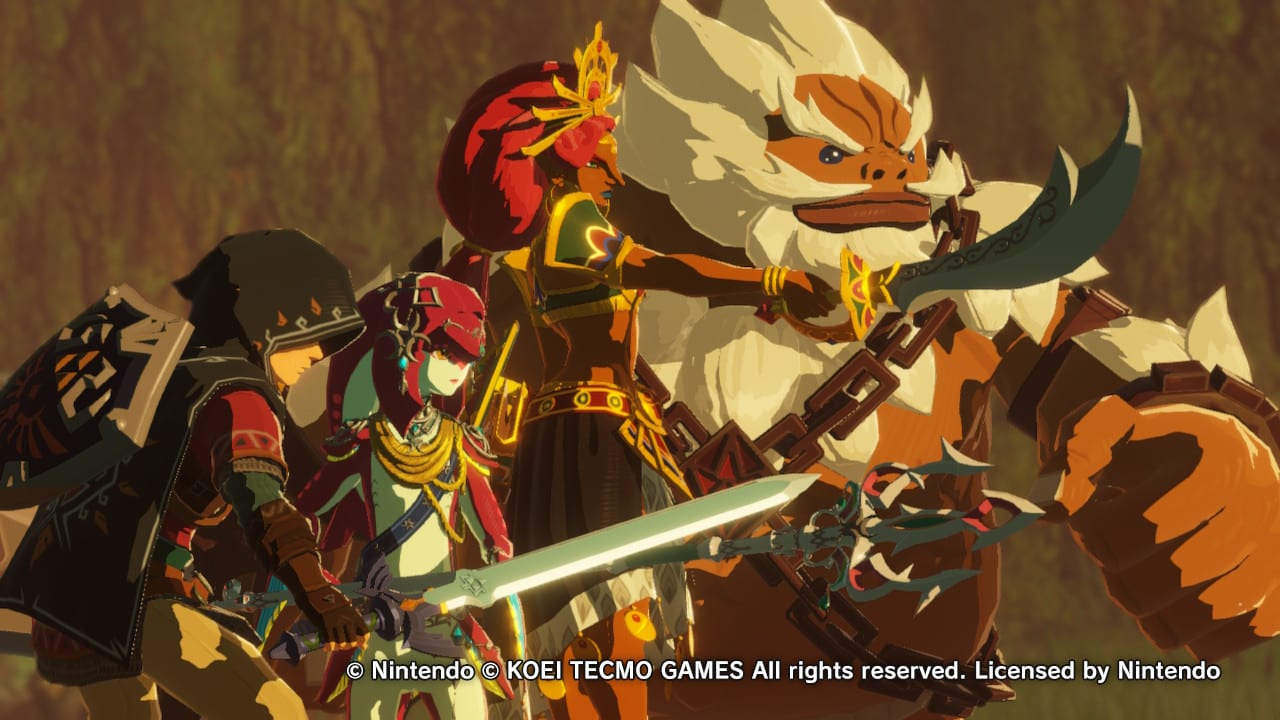 The story presented here is surprisingly good, with some unexpected twists and turns. It’s nice seeing the characters interact with each other in a big group, since there was only a flashback or two like that in BotW. Unfortunately Link and Zelda’s relationship is glossed over almost entirely here, the two are instantly inseparable for no real reason and there aren’t any moments of resentment before they come to understand each other like in BotW. I would have liked to see this expand upon those moments shown in the previous game, but the interactions we do get to see are fun enough.

If you’ve played a Warriors or Muso style game before, you know exactly what to expect here: slaughtering enemies by the hundreds (sometimes thousands) as you cut through the battlefield towards your next objective. Missions in AoC are thankfully varied, you may be capturing bases in one mission then making your way through a maze-like forest in the next. These varying objectives keep the game from getting repetitive for a time, but as the game progresses it feels like every mission will have you taking on several powerful foes one after another which gets tiring fast. These enemies start off by giving the game a very Zelda flavor, with you having to use the correct Sheikah Slate Rune to expose their weak spot meter which, once depleted, allows you to deal massive damage. About halfway through the game however, essentially all you are doing is fighting these big guys with hardly any small fry the franchise is known for in between. This problem spirals outward, somewhat diminishing the game’s otherwise excellent systems.

There are a ton of characters to take into battle with you, and all of them play completely different from one another. Every playable hero follows the general flow of mashing Y and occasionally X and A to unleash regular, strong, and special attacks respectively. Link is the most straightforward character, the three weapon types he can equip (Sword and Shield, Spear, and Greatsord) grant him different movesets, all of which are powerful yet easy to grasp. On the flip side, Impa can create temporary clones by absorbing symbols she places on enemies with ZR. With each symbol collected the number of clones which follow her moves increases, and using a special attack with a full set will perform a more powerful version of her special, but expending all symbols in the process. I found all but two of the characters (Daruk and [SPOILER]) to be a ton of fun regardless of their complexity and skill ceiling, but I did gravitate the more complex movesets with more freedom of expression such as Impa and Mipha. Zelda is probably the weakest character in terms of said player expression, since she’s stuck with a total of six attacks for most of the game, and even then her options feel very limited. Overall, combat is extremely fun and satisfying, though I would have appreciated some sort of accessibility option to not mash the buttons so much, my thumbs need a break.

Practically everyone’s attacks are geared towards large, sweeping swipes to take out a bunch of enemies in one go, so when you’re inevitably forced to take on one big foe at a time you may find yourself settling on one string and repeating that over and over until you win and can move on to the next. It feels like the part of the team who designed the missions weren’t properly communicating with those that designed the characters’ attacks. It’s a ton of fun to take out hundreds of Ganon’s minions in one swoop with the occasional miniboss, but the game seems intent on ruining the fun for the sake of increasing the difficulty later on. Instead of becoming a fun, strategic challenge of moving your team across the battlefield to handle the most pressing threats, it makes every single enemy a damage sponge. That’s not to say there aren’t moments of planning, but as you get further into the story it starts to be more of a slog. 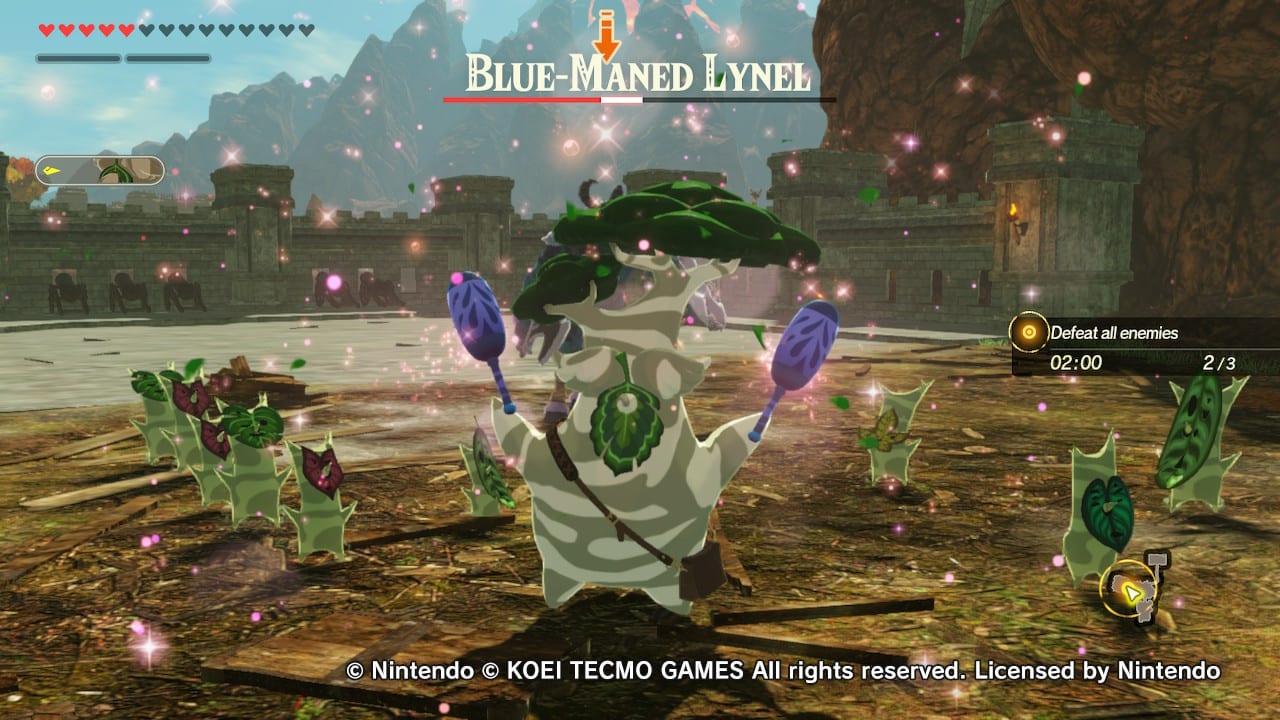 This is compounded by the difficulty of leveling up all your units together. Early on, many of the missions require Link to participate in the battle, so he’ll likely be the highest leveled character for quite some time. You can pay Rupees at the barracks to level characters up, but cash is quite hard to come by in Age of Calamity. You get around 1000 per mission in Normal mode based on completion time and number of kills, which isn’t nearly enough to bring everyone up to speed if you also want your weaponry to be up to snuff (which you need to do to stand a chance). So either you need to grind constantly between missions, or pick four characters to use and ignore the rest. Having tried to play the game with the former method, I would highly recommend doing the latter instead until the credits roll, where you do get access to a more reliable monetary venue. The same scarcity applies to the game’s only healing item: apples. There’s no reliable way to refill this crucial resource; you can’t buy them, only occasionally find them in destructible boxes around the battlefield.

Regardless of how you choose to build your characters, you will need to grind a bit between story missions. This small amount of grinding isn’t a bad thing though, as there are a ton of things to do and see in Age of Calamity. The Hyrule map will be quickly littered with icons of all kinds. There are small side quests which grant new moves, abilities, or hearts when you turn in a set of items Side missions see you take to the battlefield once more where you need to defeat a certain amount of enemies within a time limit or defend a clumsy soldier who’s clearly trying his best to get you killed. There are so many that you can safely ignore any that you don’t feel like doing if you only want to progress the story, but a lot of them are well worth completing just for the fun of it as these missions don’t suffer the same problem the main campaign does.

Going in I expected the typical rock remixes Warriors games usually create when spinning off of another franchise, but I’m happy to say that isn’t the case here. Age of Calamity’s soundtrack borrows heavily from Breath of the Wild while expanding on that game’s more minimalist tunes and adding their own bombastic flavor. The Champion Mipha is probably my favorite of the ost, but they’re all excellent and punctuate the action well. Breath of the Wild’s art style carries over very well into this kind of game as well, for the most part. While the game looks great and is very colorful, the performance and camera stop you from really appreciating it. There are quite a few moments where there are so many enemies on screen the game becomes an informative slideshow on how many frames it takes to register your inputs and the camera acts like an awkward teenager at prom: sticking to walls and corners as much as possible. I normally enjoy seeing the framerate plummet with the action in Muso games, but it’s very obtrusive here.

Age of Calamity does one more thing to shake up the game play: the ability to pilot the Divine Beasts. These sections… are honestly kind of boring. Each of them have slight differences, but their gameplay boils down to holding the R button as you aim and walk around. While Vah Ruta and Vah Medoh are inoffensive, Vah Rudania and Vah Naboris each have a gimmick that makes their sections a chore. Rudania doesn’t have the same shield as all the other Divine Beasts, and instead can counter enemy attacks; this mechanic doesn’t seem to work reliably so more often than not I would just tank damage and hope to survive. Naboris’ attacks rely on an energy meter, somewhat similar to how Urbosa’s strong attacks function, and attacking in any manner will deplete this gauge and using a shield will halt its regeneration. This could make for some interesting balancing, but the Divine Beast segments aren’t designed around this and it ends up just making you wait occasionally.

Hyrule Warriors: Age of Calamity is a ton of fun, but handicaps itself with the occasionally abysmal frame pacing, wonky camera, and design of later missions. Still, it’s the perfect accompaniment to Breath of the Wild and well worth your time.