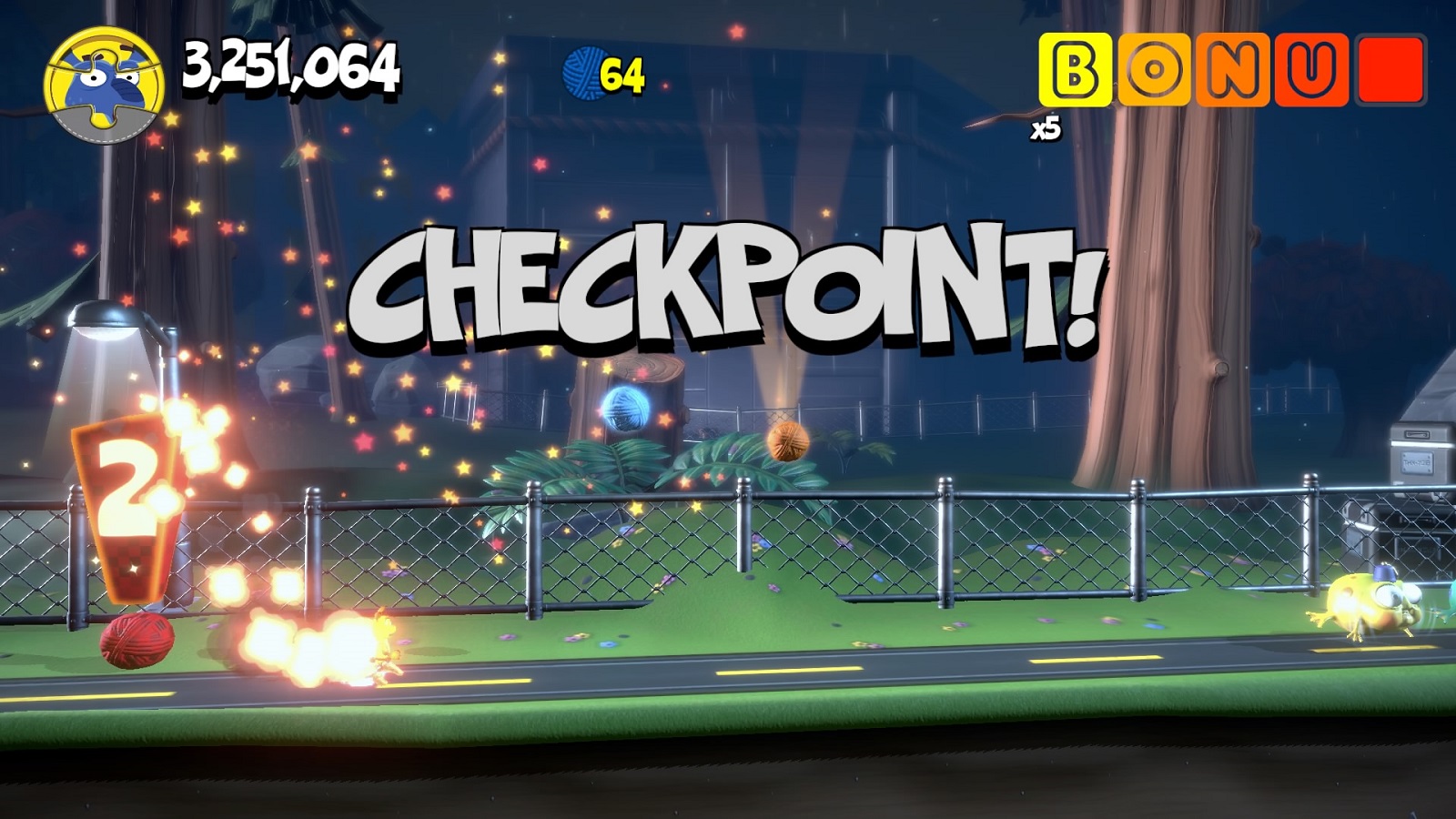 In the world of mascot platformers, Bubsy the Bobcat has gotten the short end of the stick. While his original outing 26 years ago could be considered middling at best, he’s been the butt of many a joke concerning quality. 2017 saw his return with The Woolies Strike Back, but it’s with Choice Provisions’ Bubsy: Paws on Fire! that I can say something I don’t think I could have any time earlier. After more than a quarter of a century, we’ve got our first good Bubsy game, folks. 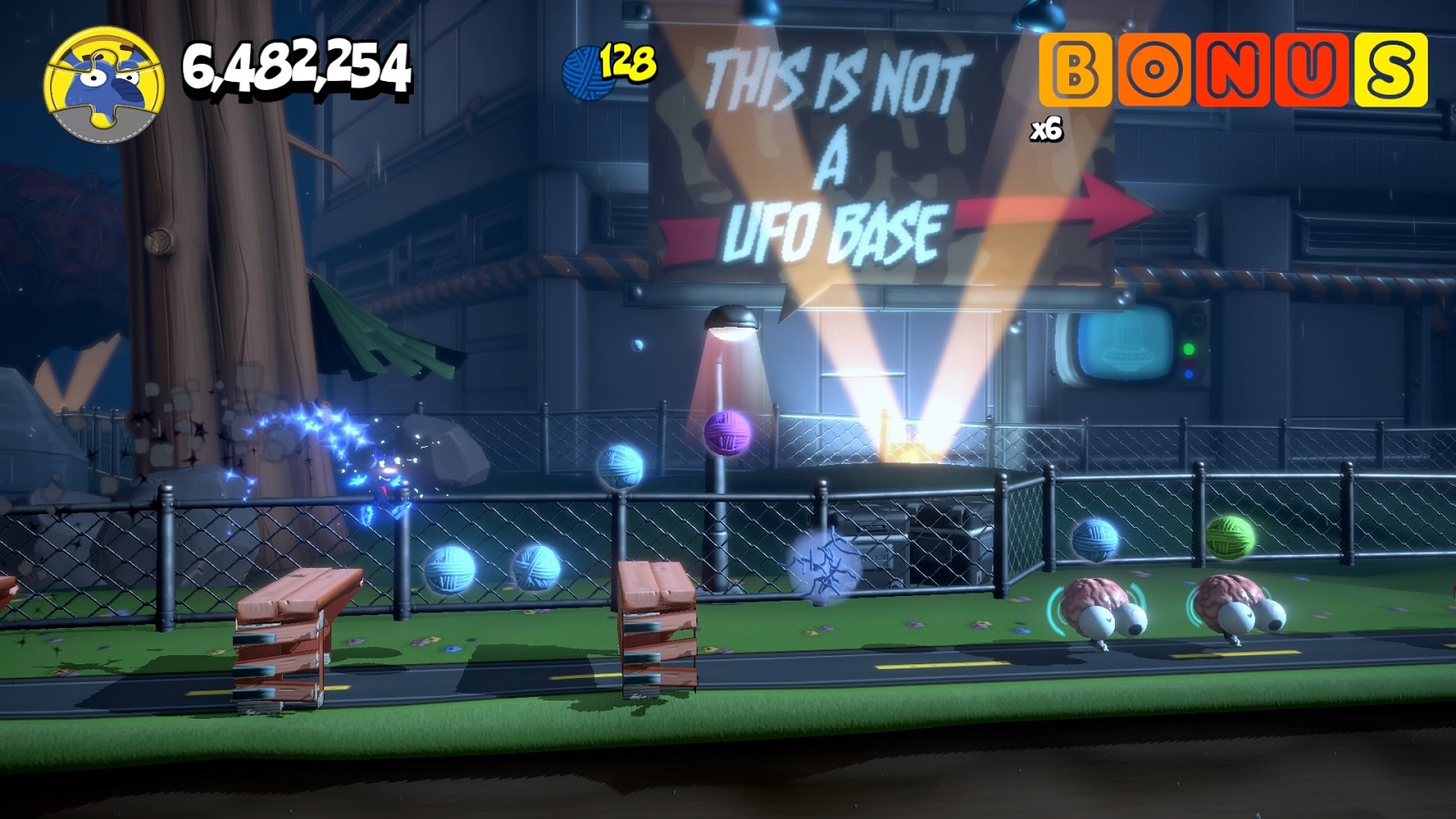 Bubsy: Paws on Fire! begins with our titular bobcat finding out that his rival Oinker P. Hammm is causing havoc once again. Enlisting the help of Virgil Reality, Arnold the Armadillo, and a Woolie (apparently they patched things up since the last game), the four traverse across three different worlds in order to stop the mad pig once and for all. While the only real story cutscenes are at the beginning and end of the game, they do help flesh out the pompous yet slightly lovable character of Bubsy, with the other characters seemingly roped into the conflict by happenstance.

I would normally talk about presentation and graphical style later in my review, but I do enjoy how Choice Provisions developed a cartoony style for the game. The models and level design are appropriately animated, and the lighthearted Saturday morning cartoon vibe is much appreciated. (This does help considering many of the characters included are from the failed cartoon pilot.) The character quips before each level as well as when getting hit are fine too, since they’re not frequent enough to be grating. I just wish there were a few more cutscenes in the package, but for a budget $24.99 title that lasts around 5 hours, it’s adequate. I dug the soundtrack made by Stemage, as it complemented the childlike visuals quite well, with some high-energy and jaunty tunes that pairs well with the gameplay.

Much like the Bit.Trip Runner series of games, Paws on Fire! is an auto-scroll running platformer, where your character moves automatically. Each character also has one hit point, which means the second you hit a wall or an enemy, you’ll be sent straight back to the last checkpoint. As Bubsy and Vergil, you’ll need to jump and dodge different enemies that impede your way. Both characters feel reminiscent of Bit.Trip Runner’s CommanderVideo, though they have different powers. As Bubsy, you can pounce (which gives you a little dash plus clears out enemies in your way) and glide (which can give you some air time), whereas with Vergil you can double jump and slide. You might feel like Bubsy and Vergil are floaty in their jumps, but you can force them to come down with a press of the down button on the D-pad (which also makes Vergil slide if he’s currently on the ground). 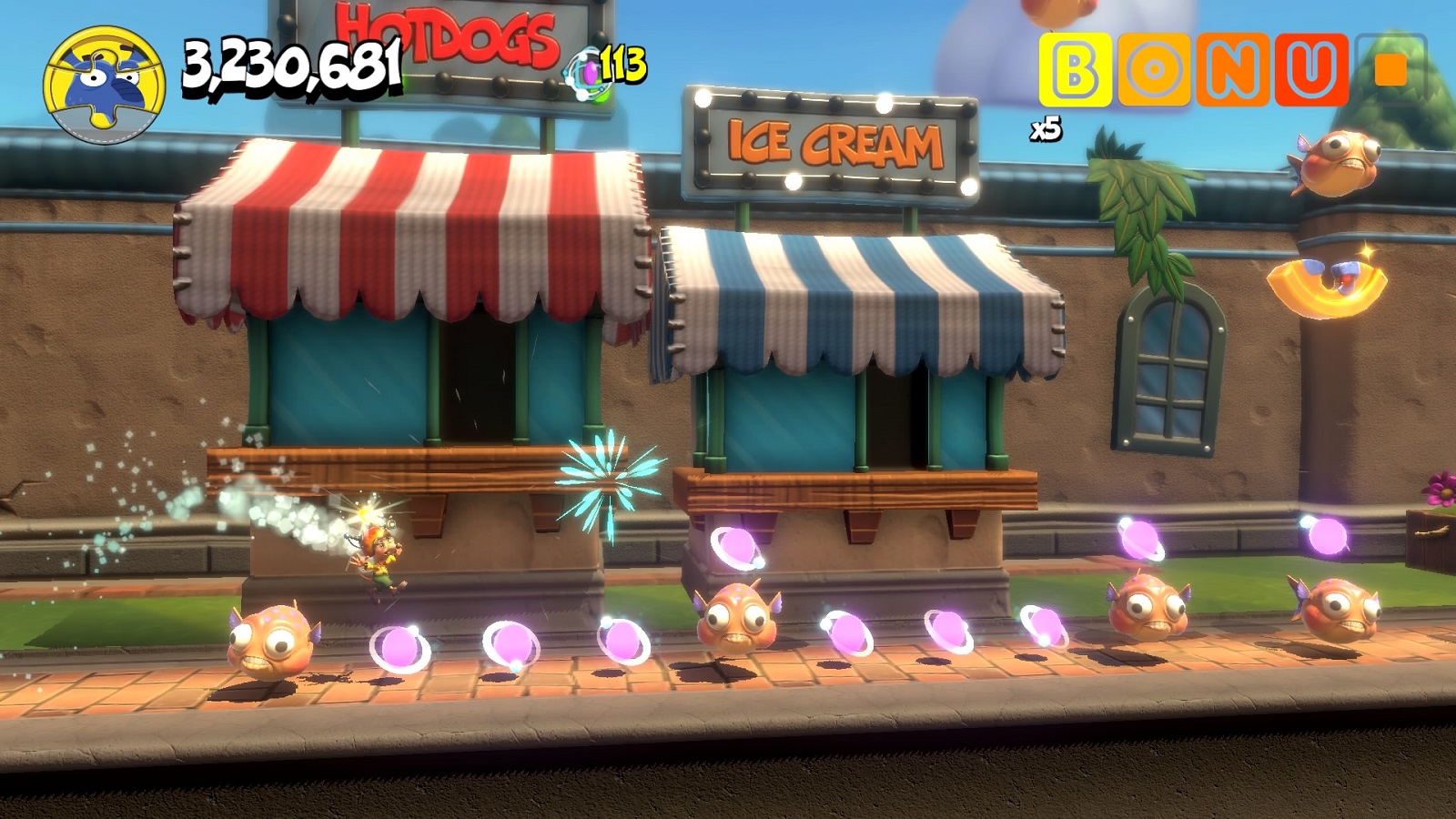 You’d think that these mechanics would make for a breezy time, but they do take some time to master. The game encourages chaining together jumps and staying in the air for as long as possible (to the point where you score points when you’re jumping). Jumping on an enemy or breakable obstacle will give you another jump, so if you’re playing well enough, you can do all sorts of fun moves. Hitting enemies or collecting yarn (150 in each level) will cause a multiplier to increase, but staying on the ground will cause it to tick down. Like the Runner games, Paws on Fire! is easy to learn but tough to master, and while it’s relatively easier than its source inspiration, there were some particularly tricky sections. It’s also pretty difficult to get all 150 collectibles in one go, so you might want to replay some levels after you finish them the first time. It helps that there are leaderboards where you can compare your score to others around the world. 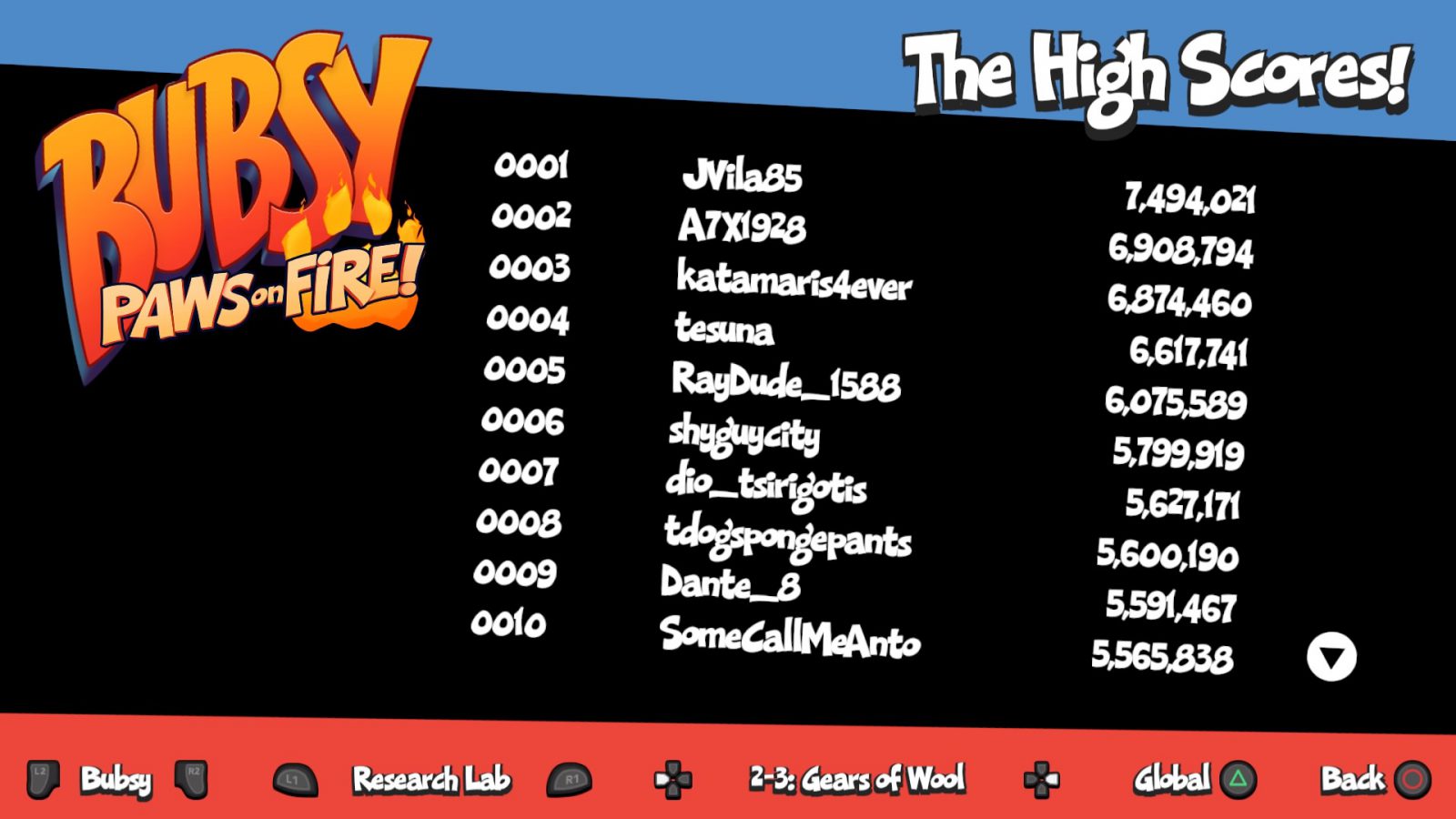 The Woolie’s levels are different, as while they inhabit the same environment, they act more like shoot-em-up games such as Gradius, where you will shoot down enemies while grabbing collectibles and dodging walls. These are differently paced compared to the other two heroes (these levels are a different genre, after all), but they’re a nice breather from the others. I did enjoy these ones a little more just because I’ve spent a lot of time with shoot-em-ups on other consoles, so they were a bit easier for me to navigate. If you want a traditional endless runner experience, Arnold’s levels are a no-fail, “get as many points as possible” tube-shaped game. You can’t lose here, with the obstacles being glue and farts that impede your screen and cause you to lose your points. These are treated as bonus levels, since you’ll have to grab special Arnold coins in each other character’s routes before you can access his corresponding level. These were probably my least favorite of the four, but since they barely last a minute or two, they’re excusable. 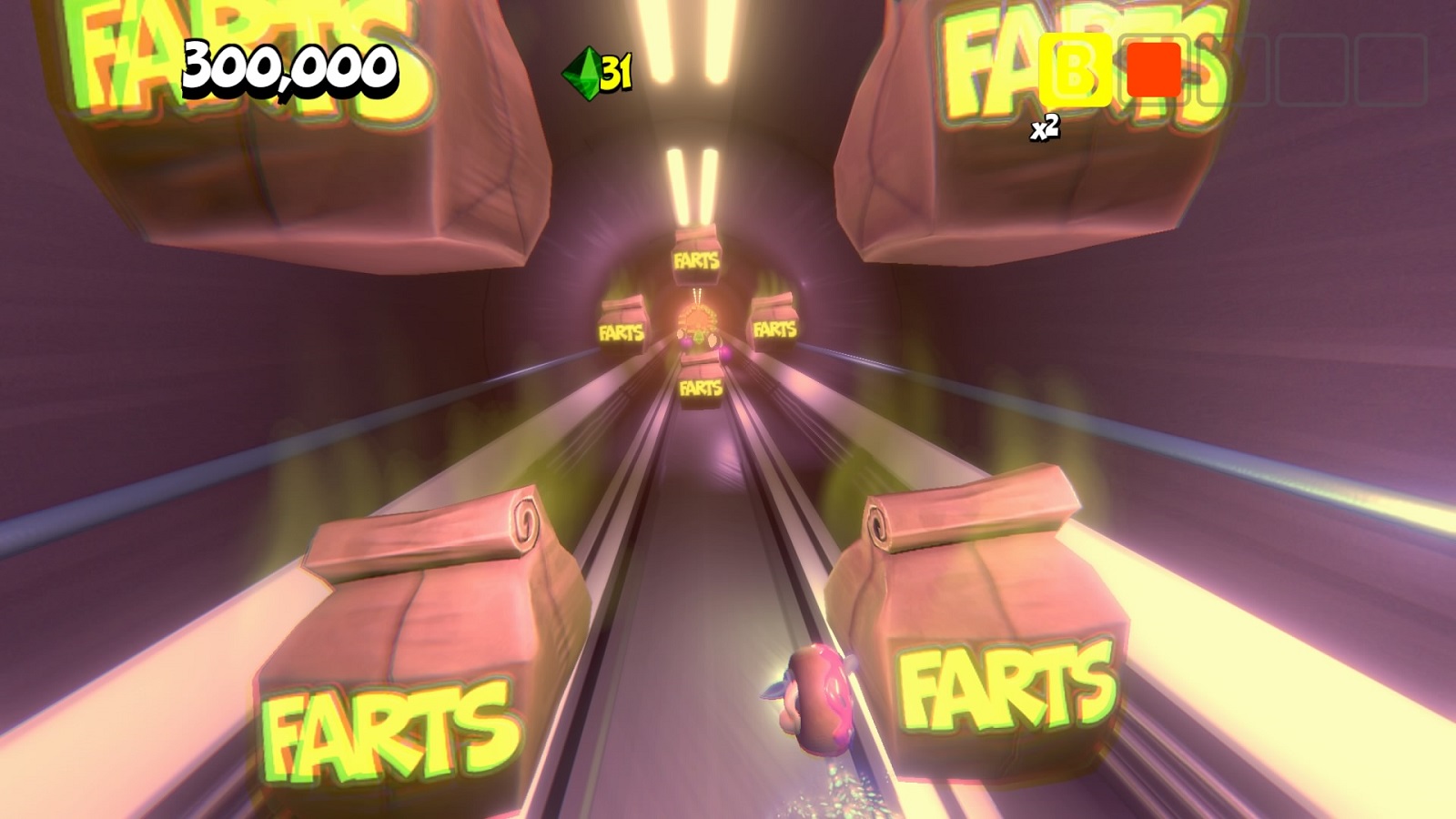 A big issue that I have with the game is level progression and forced replays. After beating a level with a character, you earn one victory medal. The game is split into three worlds with 10 levels each (9 normal levels plus one boss fight). In order to advance the game, you’ll need to collect a certain amount of victory medals in order to continue. While this isn’t a problem if you like getting every medal on a level before heading to the next, this does mean some fake longevity in terms of going through different routes instead. This does mean you can skip levels (in my playthrough, I actually reached the first boss without playing half of the world I was in due to me trying to get all the medals on each level), but if you want to reach the final level, you’ll have to do some backtracking. While the linearity is a necessity in a game like this, I would have also appreciated a bit more experimentation within the routes themselves. 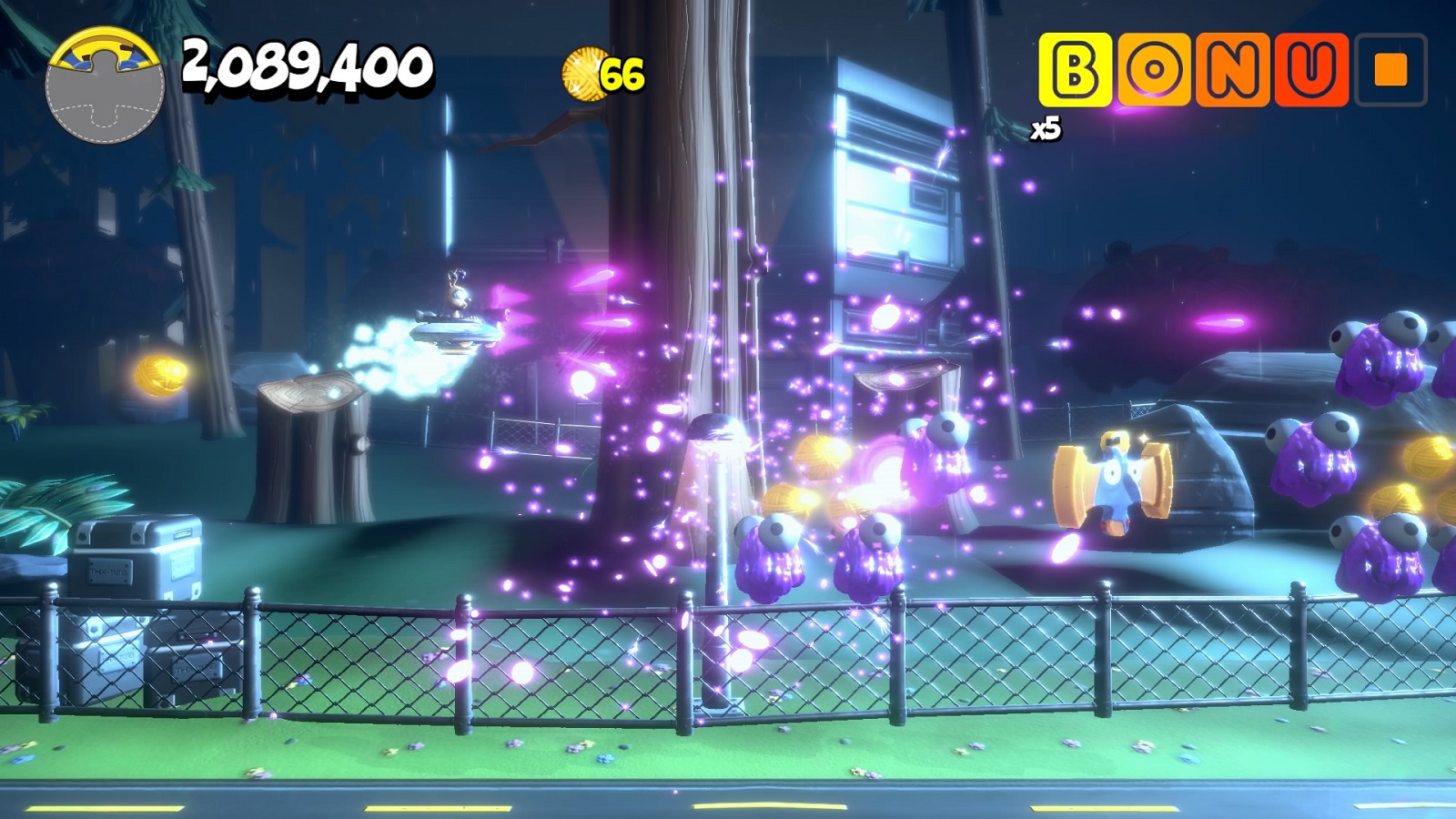 It took a little over 25 years, but Bubsy: Paws on Fire is the bobcat’s first truly great outing. With a fun, cheeky cast of characters and entertaining core gameplay, you won’t have to ask yourself, “What could possibly go wrong?”

Elisha Deogracias is an aspiring accountant by day, freelance writer by night. Before writing for Gaming Trend, he had a small gig on the now defunct Examiner. When not being a third wheel with his best friends on dates or yearning for some closure on Pushing Daisies, he's busy catching up on shonen manga and wacky rhythm games. Mains R.O.B. in Smash. Still doesn't know if he's a kid or a squid.
Related Articles: Bubsy: Paws on Fire!, Indies
Share
Tweet
Share
Submit