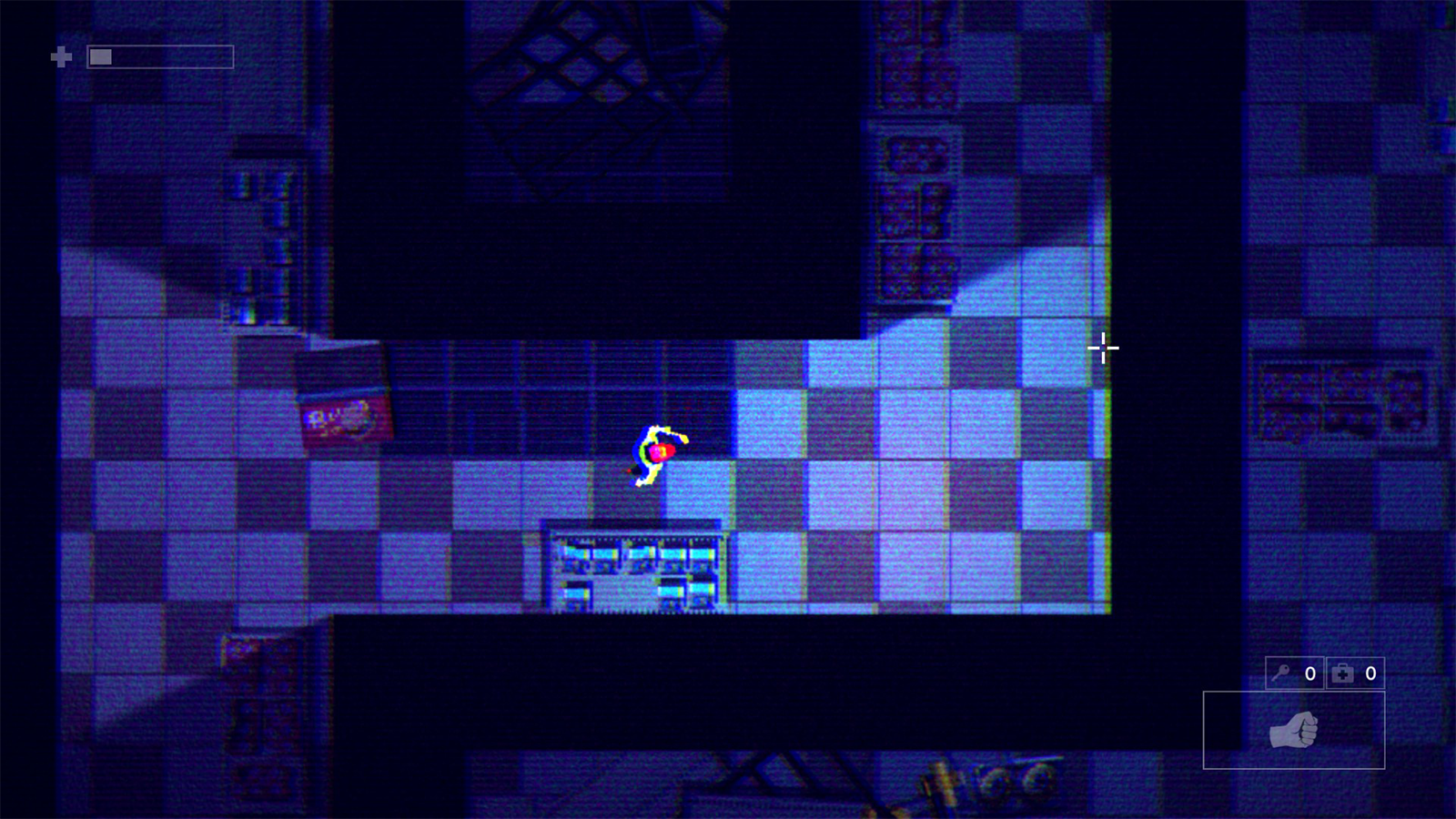 Developer-publisher tinyBuild has established a reputation as a purveyor of high quality indie games. A celebration of the passion and creativity of game developers, the company boasts some of indie’s finest gems from the scene’s rising stars. tinyBuild-published games capture hearts with their charming aesthetics and addictive gameplay, and it’s safe to say that Zombie Dynamics does its best to keep that fire burning with GARAGE: Bad Trip. It’s far from the post-apocalyptic parade of mindless carnage I was expecting—more like, strategic carnage. While blood and bullets do occupy the spotlight in this top-down twin-stick shooter, GARAGE fuses intense combat with equally captivating, slower-paced moments to create a chilling yet challenging adventure.

Style is a staple in tinyBuild games and the GARAGE’s opening scene has it in spades. The impressive introduction lifts the curtains on the dark, eerie, almost surreal world that you’ll be exploring for the next 6 hours (depending on difficulty and skill of course). The game is a unique blend of humor and horror topped with a generous amount of 80’s B-movie influence. Incredible sound design and detailed pixel art lend themselves to the creepy atmosphere of the game. The horrific sounds of enemies and the punchy gunshots make every encounter genuinely frightening and tense. Visually, GARAGE is certainly impressive, but I found myself confusing obstacles for details on the ground on numerous occasions. What looks to be small pieces of debris on the ground might actually be a poorly conveyed, giant mountain obstructing your movement.

You start off in the middle of a zombie outbreak armed with nothing but your feet and fists to fend off the bloodthirsty undead. You can roll, but rolling too much will deplete your stamina and leave your character vulnerable while he catches his breath. Your fists will quickly be replaced by a trusty fire axe and its powerful, stamina-draining charge attack, but your kick stays with you for the rest of the game. Once a weapon is deemed dull or obsolete, it’s quickly taken out of your hands and replaced with something more interesting, thus keeping your arsenal as fun and fresh as possible. The one constant is the kick, which serves as your secondary attack on every weapon and is used for knocking back enemies and kicking open doors. It’s the only move in the game that locks you in place while performing it, which is unfortunate for a game with an emphasis on precise action in quick succession. It’s nitpicking, but the awkward kick ruins the flow of combat for me. Rats are a dangerous foe, they’re hard to hit, extremely quick, and can’t be targeted by melee weapons. If you want to conserve ammo, or if you’re at the start of the game, you have no choice but play a tedious kicking game with them—by far my least favorite part of GARAGE. Additionally, your character does slide around a tad when moving, which only makes getting into kicking position that much more infuriating.

While you have a bird’s eye view, you see nothing but blackness behind obstacles. To hide the scares and shocks that the game throws at you, it’s only fair that you’re unable to see behind doors or walls. This, working together with the unnerving sounds that haunt the game’s levels, keeps your trigger finger twitchy and your eyes glued to the screen. You have no information save for the creepy sounds coming from behind the door you’re unlocking. You could die in the blink of an eye so think fast. It would be easy to hold down the trigger and spray down all your attackers, but the game doesn’t make it that easy. Guns are strong but have less than ideal reload speeds coupled with small magazine sizes. The game forces you to shoot fast and accurately, a playstyle akin to what is expected of players in Hotline Miami, a somewhat similar game. While each weapon is satisfying to use, they’re much more interchangeable than the game would like you to believe. Aside from the basic pistol (that gets tossed later on) and the axe’s versatile charge attack, every weapon can be categorized into one of two groups: slow, high-damage weapons that are great for winning duels against equally lethal foes, and lower-damage, automatic weapons for handling multiple, often weaker foes.

GARAGE pulls off horror with a top-down perspective

Still, the idea that there could be a shotgunner around every corner or that opening a door could lead to a multi-direction zombie swarm is a thrilling prospect. Each level in GARAGE has well-placed enemies, ammo, and healing items, as well as a good balance of action and horror that could only be the product of meticulous planning. If only there was more enemy variety. Special enemies have additional health and damage output, but their behavior is almost identical. The AI is rather simple: enemies move towards you upon contact. It’s easily exploitable and often leads to glitches when enemies get stuck on doors or obstacles.

GARAGE is a very challenging game that will have you retrying segments over and over until that perfect run manifests. The checkpoints are well-placed so you don’t have to worry about having to redo multiple challenging sections back-to-back if you fail. You’re never forced into flashy combat situations long enough to grow numb to it, and you’re never out of combat long enough to develop any feeling of safety. Nothing overstays its welcome in GARAGE. There’s a level dedicated to stealth, a classic mounted machine gun massacre, a borderline bullet-hell level, but they simply do their job and leave. That being said, I wouldn’t have minded if some of these unique mechanics found their way into the rest of the experience. Sprinkling a bit of stealth throughout the game instead of condensing it all into one short level could compliment the cautious playstyle that the game encourages you to adopt. Similarly, the bullet-hellish sections were a breath of fresh air from the melee or hitscan-oriented levels. No other enemy in the game has avoidable projectiles, which could have spiced up the enemy variety.

One of the biggest missed opportunities are the boss encounters. Don’t get me wrong, the bosses in GARAGE are a blast to fight, but they do little to test the skills that their preceding levels forced you to develop. Though visually in line with the rest of the experience, the methods to tackle bosses are vastly different than the rest of the game. The majority of bosses ask nothing else of you except to unload as many bullets as you possibly can into it and are often accompanied by groups of normal mobs (adds) that can be dispatched the same way. What the rest of the game tells you is a bad habit, becomes the key to success in the boss fights.

Aside from this inconsistency, my absolute biggest gripe with the game has to be the psychedelic trips, or lack of. In a game called GARAGE: Bad Trip, it’s downright upsetting how few of these “bad trips” there are. They aren’t in any way incorporated into the gameplay. The first time it happens, the game teaches you about destructible walls and then thrusts you down the most suffocating, linear section in the entire game. The only reason it’s still exciting is because of the trippy visuals. The second time is purely visual, and it’s a great reward after a few tough sections. The final time, the best usage of it, is the most interesting bit of storytelling in the entire game. Certain combat encounters, especially the boss fights, could all have used this psychedelic edge to get creative not just with the visuals, but the gameplay as well.

A sudden visual shift courtesy of a bad trip

Believe it or not, the game also has a story and quite an intriguing one at that. Aside from the psychedelic magic shows, the story is told primarily through notes scattered around levels and through dialogue at the start or end of levels. While there’s nothing innovative to be found, it’s more than entertaining enough to keep you going. If the heart stopping levels weren’t enough to keep you going, the many mysteries surrounding your character and others will compel you to push onward.

Aside from this main story, the game features a handful of bonus modes. These extra challenges aim to test your skills in specialized maps with unique rule sets. None are particularly long, but you can’t argue with a few more well-designed levels. For the completionists, multiple levels in the main game house a safe that can only be unlocked by finding all the lock numbers hidden by secret walls and rooms.

GARAGE is a solid game that offers intense gameplay and a unique aesthetic, but little more beyond that. The weapon and enemy variety is slightly underwhelming and the game does little to dive into more interesting mechanics that would have invigorated the gameplay.

GARAGE: Bad Trip is a top-down twin-stick shooter that wants nothing more than to impress and excite. The sleek visuals and sublime sound design lure you in, then the fast-paced, challenging combat keeps you hooked on clearing level after level. However, missed opportunities and wasted potential take their toll on the game, limiting gameplay variety and giving rise to the game’s tamer moments.

A self-deprecating, overly sarcastic pair of glasses that occasionally possesses a human host in order to partake in the delightful process of playing video games, then immediately complaining about them. When he is not playing games (a rare occurrence), he can be found either writing about things that no one cares about, or haunting the quiet streets of his Canadian suburb.
Related Articles: Garage, GARAGE: Bad Trip, Indies
Share
Tweet
Share
Submit