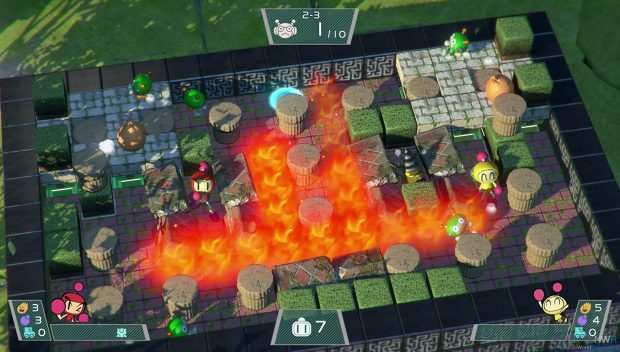 75Normally I try to put together some backstory for my review pieces, talking about the history of the series, what led to the current iteration, and the expectations you might have moving forward.

But this is Bomberman.

Bomberman, for those who never played it on any of the platforms (everywhere from the NES to the 360), is essentially an isometric 2D action-puzzle game that has you pushing blocks as you drop bombs to try to kill your super cute chibi-style opponents in multiplayer combat. Aimed at playing with friends, Bomberman is a natural fit for a system like the Switch.

The story can be played cooperatively.

Super Bomberman R has a handful of modes. The campaign has the Bomberman Bros (which also includes ladies, naturally) fighting Emperor Buggler and his Five Dastardly Bombers as they seize control of the five main planets of the Starry Sky Solar System. Told through some goofy voice-acted cutscenes, the story shows the eight members of the Bomberman Bros having to defeat them and their evil master to restore order to the planets. It’s not going to win any awards for the hokey storyline or the twitch-inducing chipper voice acting, but it’s a functional story mode.

There are three difficulty levels, beginner, veteran, and expert. These determine the number of lives and the difficulty of the boss that inhabits each planet, as well as the little enemies that roam the levels. With 50 levels in all, you might imagine it would be a long campaign, but each level is only a few minutes long, so it’s shorter than you think. Between worlds, another sugar-coated cutscene plays, providing a little more flavor to the story.

Levels start off simple – bomb, move, bomb, move, repeat. Further in, the enemies become a little smarter, and obstacles, ramps, magnets, and various other modifiers begin to pop up. Before long, you are pushing blocks, hitting switches, and tackling a little bit more complexity, but nothing approaching Adventures of Lolo levels of difficulty. Sometimes the goal is to wipe out all of the foes, escort and guard a VIP, or hit a few switches, but most of the time, you’ll just be bombing enemies and blocks as you cut a swath to the exit.

You can play multiplayer with up to eight players.

As you progress in the game, you’ll earn coins. If you just took a sharp microtransaction-fueled breath with memories of Konami’s Metal Gear Solid 5, rest assured that these are simply in-game currency and no real money changes hands. This in-game currency is used for cosmetic upgrades such as adding a top hat to your person, flowers, spaceships to ride in, additional characters, and more. Everything in the store is cosmetic, with the exception of twelve additional maps for multiplayer.

Punctuating each world is a boss fight. These boss fights tend to be the highlight of the campaign mode. You’ll first take them on inside the confines of the usual maze setting, and then again in an open arena, earning some coins and a star rating for how well you did in clearing that planet. Additionally, the entire campaign can be played with drop-in, drop-out cooperative play. Bringing a friend makes it instantly more fun, helping with the otherwise difficult boss battles.

There is one glaring thing that drove everyone in the house absolutely nuts while playing Super Bomberman R – voice repetition. As an example, if you pick the Black Bomber, every time he drops a bomb, he says “TAKE THIS!” If you’ve ever watched a Bomberman match, you know that dozens if not hundreds of bombs can get dropped in the course of play. The voice repetition is absolutely brutal. Similarly, the music is almost a 15-second loop. It, too, repeats ad nauseum to the point where we ended up muting the sound.

The boss fights are the real highlights here.

Multiplayer is where Super Bomberman R flexes the bulk of its muscle. Multiplayer Battle lets you and seven of your friends square off using a single Switch. Local Battle extends this concept using other nearby Nintendo Switch consoles for head-to-head combat. Online Battle lets you chain up to four Nintendo Switch consoles together via the Internet for 8-player battle. These online matches are split into League Battles (where you earn BP and rise through the league ranks) and Free Battle. The Free Battle mode lets you select all sorts of rules to tailor the game without the added pressure of the tiered and ranked battle.

Normally I don’t dig into the price of a game in a review, but as a part of a launch filled with games like Fast RMX, and Snipperclips coming in at cheaper prices, it was surprising to see Super Bomberman R landing at a $49.99 price. Given the somewhat light amount of content here, that’s a tough ask. The multiplayer mode is the meat of this package, and unless you’ve invested in a several pairs of additional controllers, you’ll likely be playing this co-op with a single additional friend. That scenario seems a little thin for full price.

Though it is a little light on content, Super Bomberman R scratches the retro itch for hectic action. Voice repetition is a bit of a turnoff, but the charm and multiplayer focus help to make up for it. If you and your friends like purely chaotic action with up to eight players, Super Bomberman R might be right up your alley. If you aren’t investing in extra controllers, you might want to nab this after a price adjustment.

Ron Burke is the Editor in Chief for Gaming Trend. Currently living in Fort Worth, Texas, Ron is an old-school gamer who enjoys CRPGs, action/adventure, platformers, music games, and has recently gotten into tabletop gaming. Ron is also a fourth degree black belt, with a Master's rank in Matsumura Seito Shōrin-ryū, Moo Duk Kwan Tang Soo Do, Universal Tang Soo Do Alliance, and International Tang Soo Do Federation. He also holds ranks in several other styles in his search to be a well-rounded fighter. Ron has been married to Gaming Trend Editor, Laura Burke, for 21 years. They have three dogs - Pazuzu (Irish Terrier), Atë, and Calliope (both Australian Kelpie/Pit Bull mixes).
Related Articles: Super Bomberman R
Share
Tweet
Share
Submit