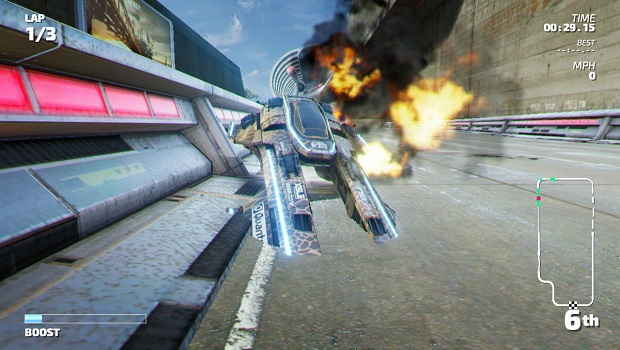 If there’s one franchise that Nintendo should revive for the Switch (other than Metroid, obviously), it’s F-Zero. The adrenaline-filled action mixed with great level design and punishing difficulty made for a series that desperately needs another sequel. What better way to fill the gap then but with Shin’en Multimedia’s Fast RMX, an enhanced remake of the Wii U game Fast Racing NEO? While it lacks some staple racing modes, Fast RMX is a solid addition to the launch lineup of Switch titles, and a steal at $20.

To call Fast RMX an F-Zero clone would be selling the game short; the game is markedly different from its franchise idol. You, as one of fifteen selectable vehicles, take to the track in thirty different courses, all focused on blistering speeds. Each vehicle has different acceleration, top speed, boost, and weight. While there are some overpowered machines, they’re mostly balanced and cater towards different playstyles. Peppered throughout the courses are boost orbs, which you can use to quickly speed ahead of the competition, as well as blue and orange colored boost or jump pads. Using the unique phase mechanic, you’re going to have to switch between the two colors in order to get the benefits of the pad. The only items are the orbs, so it’s just you against your rivals in races based purely on speed.

This is probably the most F-Zero thing the game has. Still a pretty cool vehicle.

When you boot up the game, you’ll notice that it looks gorgeous. For an updated remake of a Wii U game, this is a great-looking title. Whether you play it docked or in portable mode, Fast RMX takes advantage of the Switch’s technology to deliver quality futuristic-looking graphics. The detail put into the various courses are amazing, and while you won’t have time to appreciate the scenery, each course is filled to the brim with massive landscapes and buildings. You can also see the dirt or rain that splashes in your front-view window when you encounter it, in a way that isn’t distracting and detrimental. As an added touch, you can also see some wonderful crash animations should you veer out of bounds or hit an obstacle. It’s pretty amazing that the framerate doesn’t take a hit for the most part, with only slight slowdown in some of the more intensive courses. The soundtrack fits the presentation as well, featuring a host of techno-laden tracks that heighten the action. Other than the graphics, Fast RMX utilizes the HD rumble, where you can feel the rumbling when you experience off-roading turns or crashing into a wall. It’s an immersive addition with which I was impressed, and I really hope more racing games make you feel like you’re in the cockpit.

Whether you can see the rain on your windshield or feel the gravel on a dirt road, the Fast RMX makes wonderful use of the Switch.

With this presentation, it’s also an achievement that the game is challenging. The main championship mode (which features ten cups of three courses each) has various difficulties, but even on the easiest one, I was struggling to place first in the last few cups. The computers will take every advantage they can get, and sometimes even one misstep can cause you to go from first to last place fairly quickly. Thankfully, it’s just as easy to get ahead, and by memorizing the courses, you’ll be speeding through your competition with ease. Knowing your terrain on the easier difficulties will help you in harder ones, so it’s worth it to replay and get better times.
If you want a bigger challenge, Hero Mode (an F-Zero inspired mode unlocked after the first cup) will force you to flirt with danger, as your boost energy doubles as your shield energy. Bump into too many things, boost too many times without replenishing, or crash just once and you’re toast. Additionally, you’ll have to place first in the course in order to clear it, so prepare to pedal to the mettle and brace for impact. Even grizzled racing game veterans may have trouble clearing the Hypersonic difficulty on this mode.

Don’t forget, My Hero Academia season 2 is out this April! (Plus, this is pretty hard to get in later courses.)

While the main package is great, there are also quite a few notable things missing from Fast RMX. While there is a screen that explains which button does what action, there isn’t a true tutorial for the game. This normally isn’t a problem with arcade racers, but this is a game with a bunch of intricate techniques that you’ll have to utilize in order to dominate. It would’ve helped if I could see why I kept getting bumped aside by rivals and how I could do the same, and eventually I did learn how to do it, but having a comprehensive tutorial would have been preferred. It’s also a bit odd that there isn’t an option to select individual tracks to practice; the main championship mode only has them in sets of three, which means if you want to try a certain track out, you’ll have to use the corresponding Hero Mode version. That isn’t recommended due to the steep difficulty of that mode, however. While the courses themselves (as well as the various difficulties) will keep you busy for a few hours, another couple of modes would have added to the experience.

Local multiplayer is a great option here, with the game supporting split-screen and local Switch-to-Switch modes. I wouldn’t recommend playing with four people in portable mode, but it’s a nice two-player experience. Online multiplayer, on the other hand, is unfortunately bare. At the time of writing, you’ll be up against random people from around the world, choosing from a random set of courses. By winning races, you’ll earn points, and apparently the matchmaking process will match you up with similar scores. However, this experience is a bit basic, and the fact that you can’t customize anything here is disappointing; you can’t even pick a course if it’s not in the current rotation of online matches. You don’t even get the option to play with friends, which would have been a great thing to do with the Switch in its infancy period. For now, just stick with local multiplayer if you want some Fast RMX fun with friends. (According to Shin’en Multimedia, the lack of friend support will be rectified in a later patch, but the degree of customization is unknown at the moment.)

Finally, I take umbrage with the phase mechanic, since it unfortunately hinders the overall speed of the game. There were many times where I was focused on avoiding falling off a road before I noticed that I wasn’t the right color for a jump pad, missing it and falling off the road anyways, thus costing me the win and a little bit of sanity. Additionally, if you aren’t the same color of a pad, then you’ll slow down, which will leave you open to getting hit from behind. This can be circumvented by boosting (and there’s actually an exploitable technique which can help you save boost energy), but the mechanic is a mere annoyance at best and slows down the experience at worst.

It may need some more polish in its modes to race with the big leagues, but Fast RMX is a great title with challenging difficulty and beautiful locales that are matched with its nose-bleeding sense of speed and arcade-inspired mechanics.

Elisha Deogracias is an aspiring accountant by day, freelance writer by night. Before writing for Gaming Trend, he had a small gig on the now defunct Examiner. When not being a third wheel with his best friends on dates or yearning for some closure on Pushing Daisies, he's busy catching up on shonen manga and wacky rhythm games. Mains R.O.B. in Smash. Still doesn't know if he's a kid or a squid.
Related Articles: Fast RMX
Share
Tweet
Share
Submit