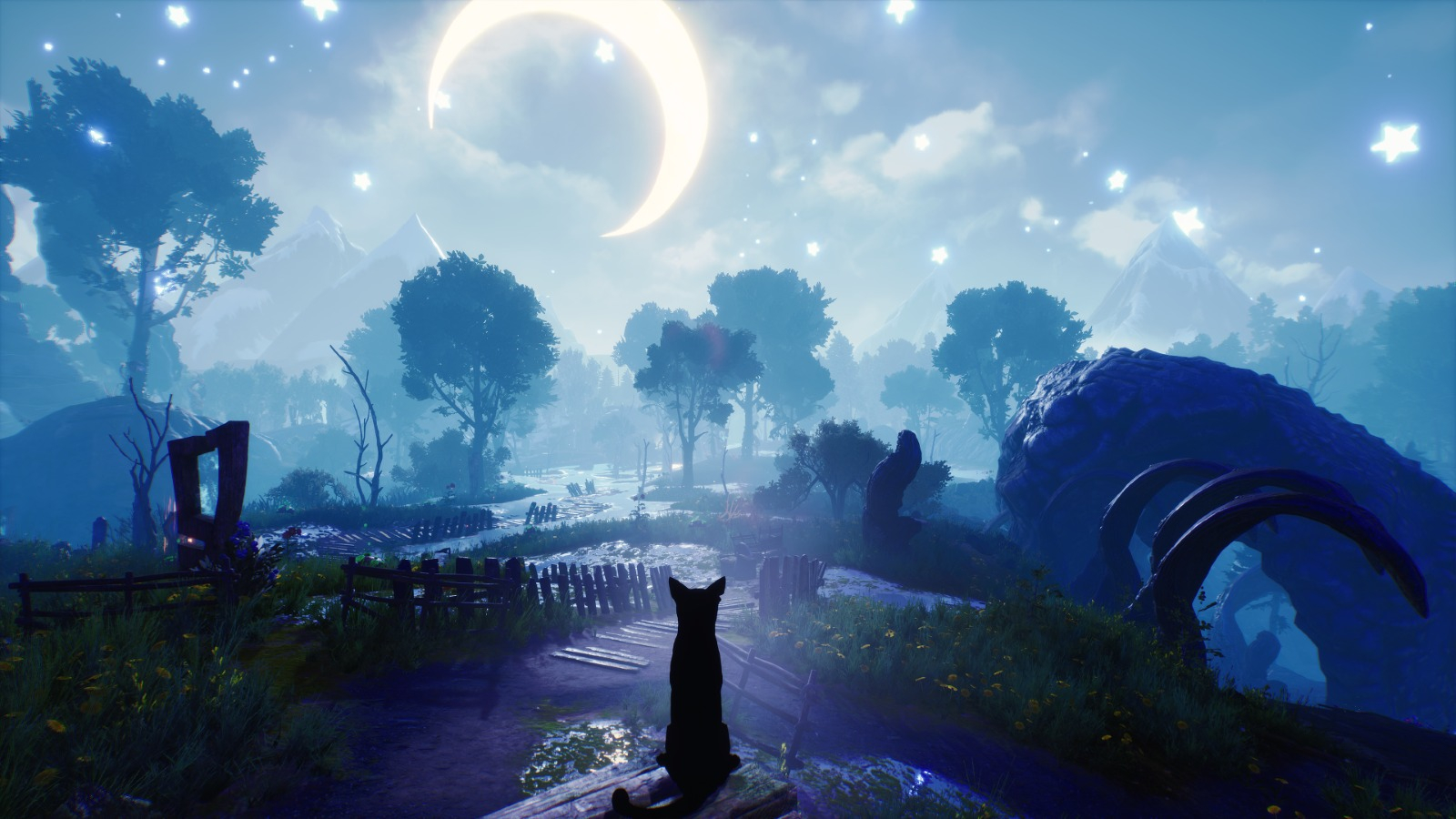 We all grew up listening to stories. Folklore, myths, and fairy tales are some of the oldest narratives known to us. These stories pass through generations introducing children to magic, enchantments, and mythical beings. Our imagination runs wild as we picture these unique worlds and captivating characters.

Blacktail is developed by The Parasight Team and published by Focus Entertainment. The Parasight Team was founded with the dream to reinvent folklore their own way and adapt that into modern video games. Based in Poland, the studio is composed of many veteran developers from the industry. Their latest project succeeds in blending intriguing narrative with gratifying gameplay. Let’s talk about Blacktail. 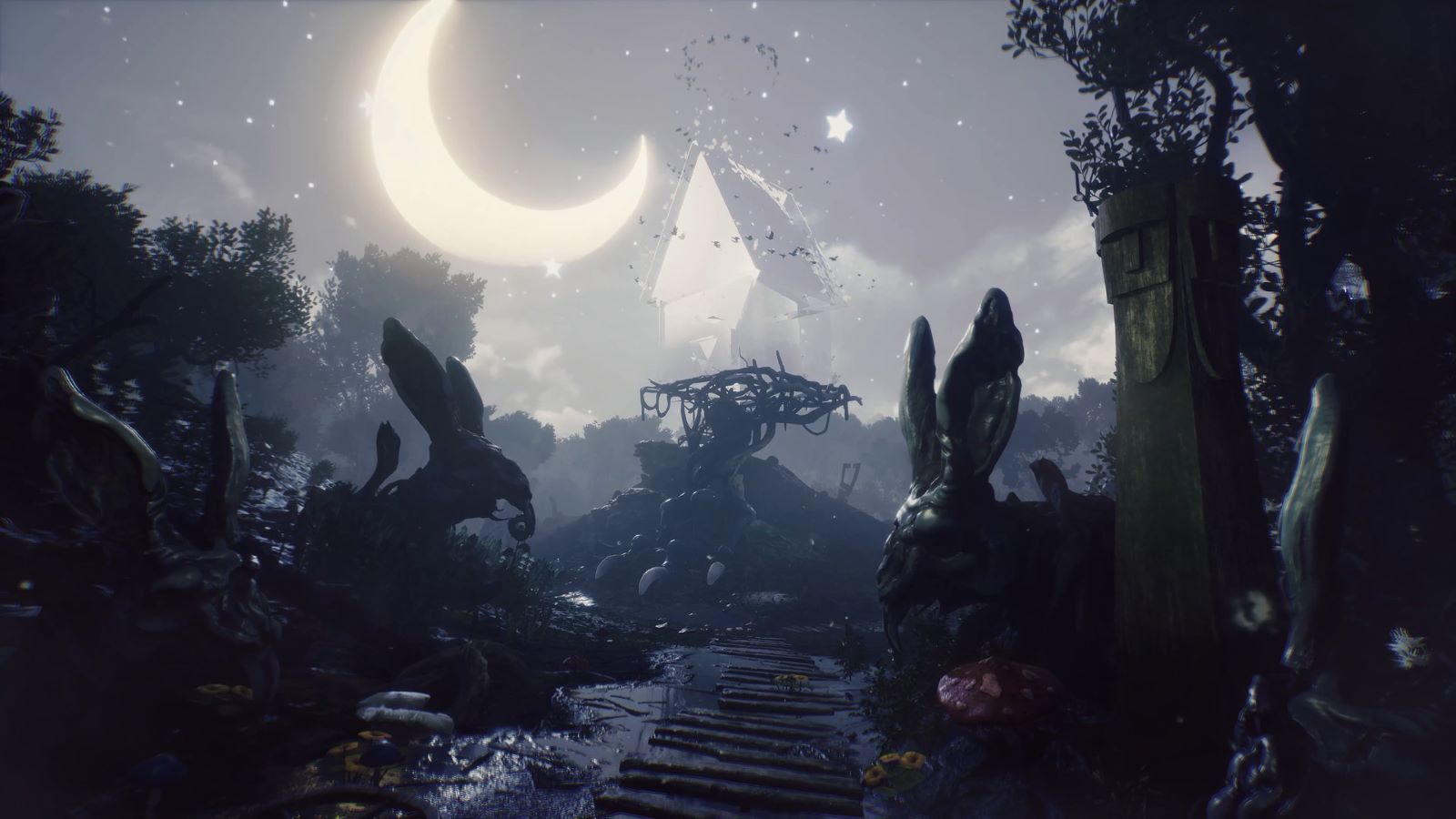 I did my playthrough on the PS5, and Blacktail performs surprisingly well. There are a few different performance options available. Most of my playthrough was with no frame limit and performance over quality. I briefly lowered my frame rate to 30 with quality over performance, but there isn’t a glaring visual upgrade. There is a motion blur toggle that I turned off and for me, it helped my overall experience. Praise is due as from start to finish I experienced zero bugs, glitches, or frame drops. Even during boss encounters where the most action takes place, the game still runs incredibly smoothly.

In Blacktail, you take on the role of Yaga. She and her twin sister Zora grew up as orphans in a superstitious village that shunned her. She bears an unusual birthmark on her face, causing the villagers to antagonize her. To conceal both herself and her scar, she wears a mask to hide from society. Haunted by unsettling dreams, she hears a weary voice instructing her to find “The Hut.”

The story starts when Zora disappears without a trace. With her protective sister no longer present, Yaga is forced to leave her village as she is accused of an unholy alliance with Baba the Witch. Rejected by her home, she sets out to find her sister and discover what her dreams truly mean. She is accompanied on this adventure by “The Voice”, a mysterious guide that appears in her thoughts, whilst keeping her true motivations hidden. The story surprises at every turn, so going in as blind as possible is highly recommended. 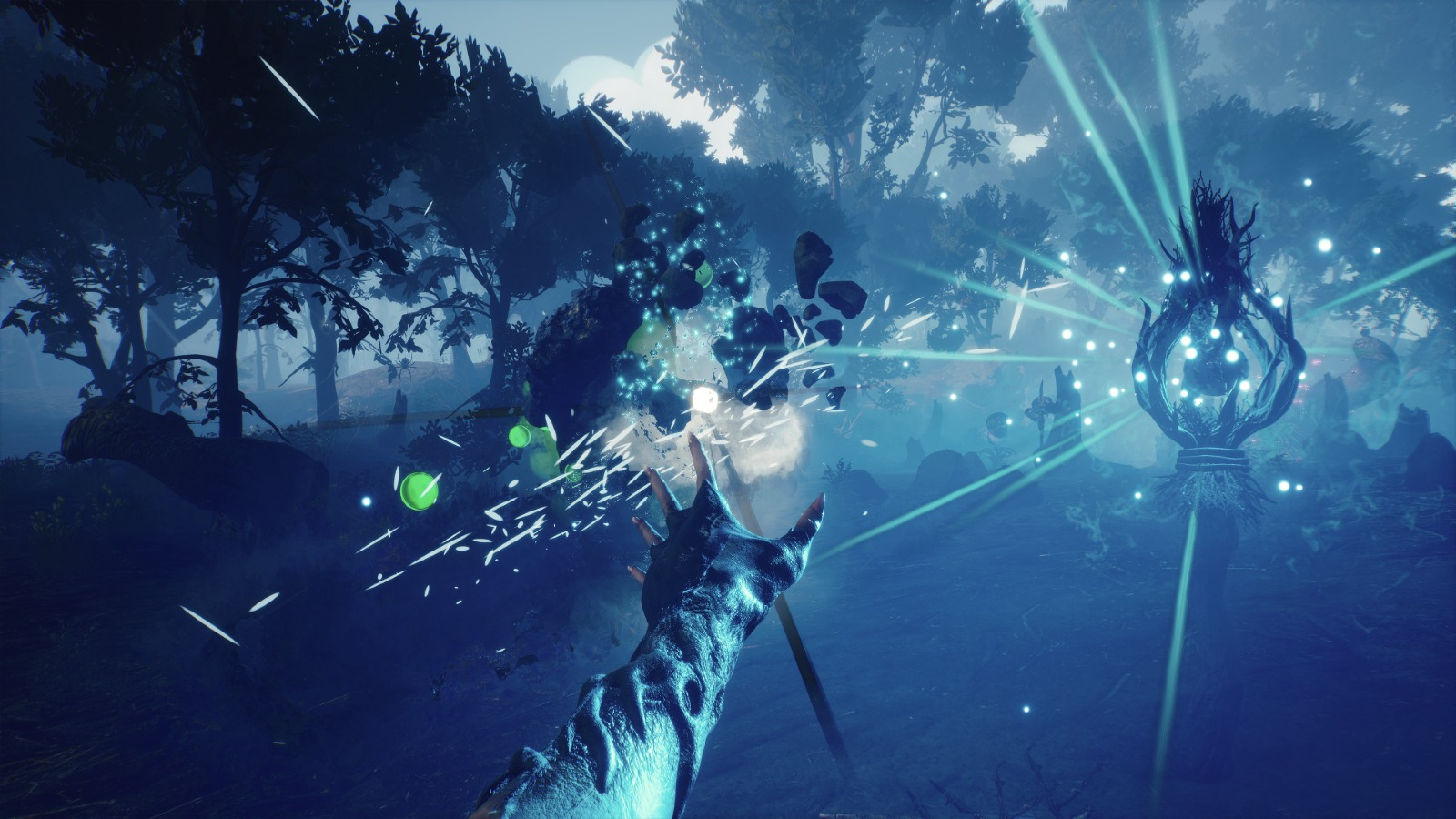 The narrative and dark fantasy instantly caught my attention, and I cannot express how much I am a fan of this artistic theme. The world is bright and colorful, yet as you look closer things aren’t so cheerful. The characters and designs are unique and fitting for the dark fantasy atmosphere. When you put all these things together, it leads into the art direction being one of Blacktail’s greatest strengths.

The writing is excellent, as each character’s personality comes through in dialogue and expression. Like other games, an almanac gives lore and depth to not only characters but the land itself. The lore is gripping and I read every entry as it unlocked, something I enjoy but others may not. The majority of the dialogue is between Yaga and “The Voice” in her head, and both performers deliver phenomenal work.

The gameplay is a blend of first-person archery and integrated magic casting. Blacktail does a great job of each part complimenting the other. There is no true melee attack, thus magic is a great tool to keep foes at an advantageous range. The bow is consistent and becomes more versatile as the game progresses. The bow is your only weapon, therefore having different arrow types with differing effects keeps gameplay from becoming stale. You get different arrows by either picking them up in certain areas or crafting them from specific ingredients. 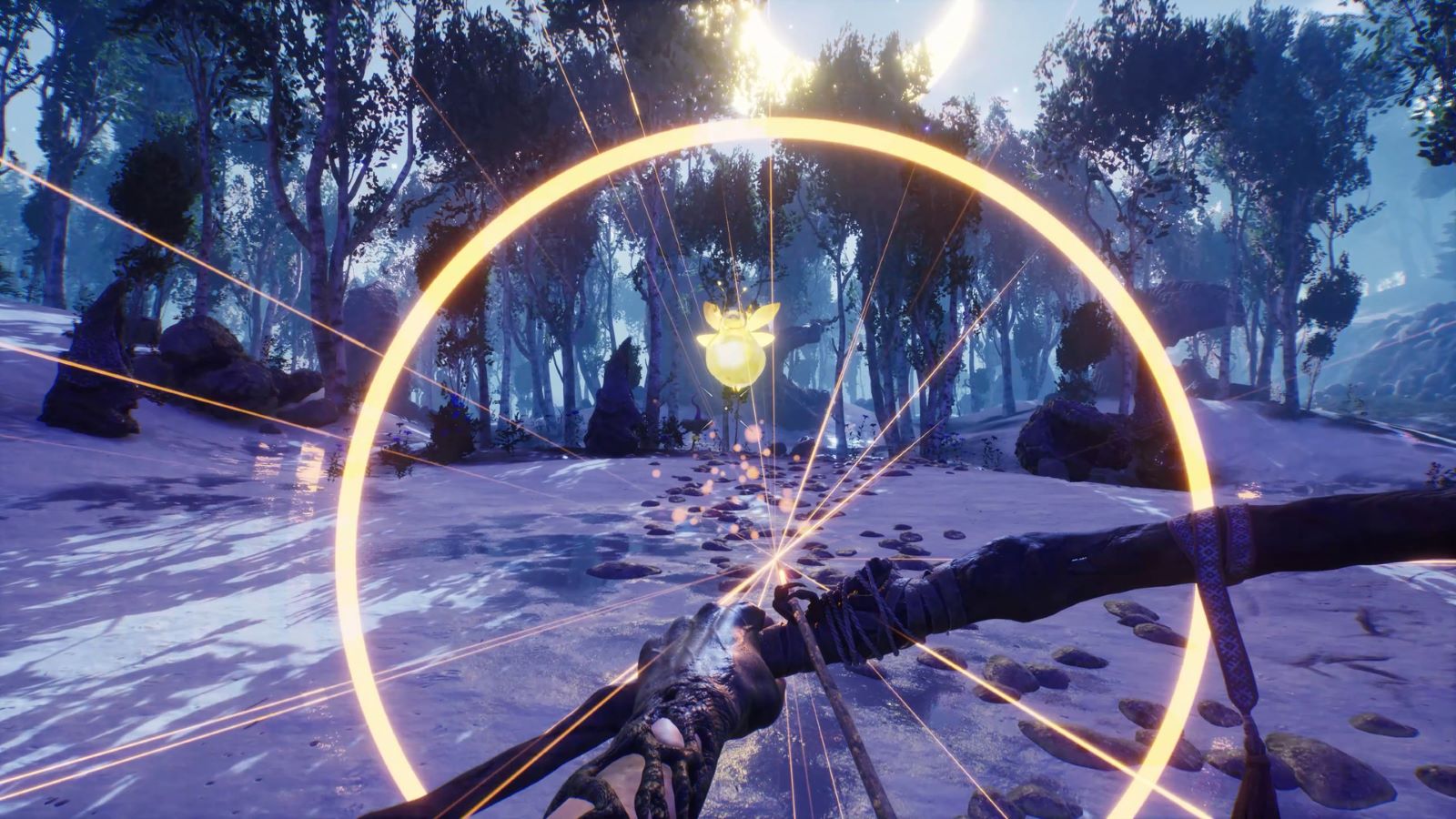 A major gameplay loop is gathering and scavenging ingredients to craft items and upgrade your skill tree. The skill tree contains perks and abilities that require specific scrolls to be unlocked that are hidden throughout the world. It’s a system I prefer over an experience-gated style. Exploring for ingredients is a necessity because aspects of gameplay and item crafting use them. Items are fairly scattered around so the amount of times you are in need of materials isn’t too common, but still occurs.

Morality plays a major role in Yaga’s development throughout the game. The choices you make in Blacktail have consequences, and those decisions carry into gameplay skills. Everything from story dialogue to freeing a bird caught in a trap have implications that affect how particular skills act. Depending on your path, you achieve different titles that grant different benefits. For example, “The Witch’s Apprentice” ability uses sunlight or leech hocus, depending on if you have the “Gracious” or “Corrupt” title. The path isn’t clearly laid in front of you. Many of these decisions are built into the land you explore, hidden until you encounter them. To illustrate, while walking down a path I noticed a fruit hanging from a branch above a small creature. I shot the fruit down to allow the creature to eat, thus earning me “good” morality. There are no notifications or signs, simply acts the player does in their world. I don’t believe I’ve encountered a system like this, so it makes the game very engaging. 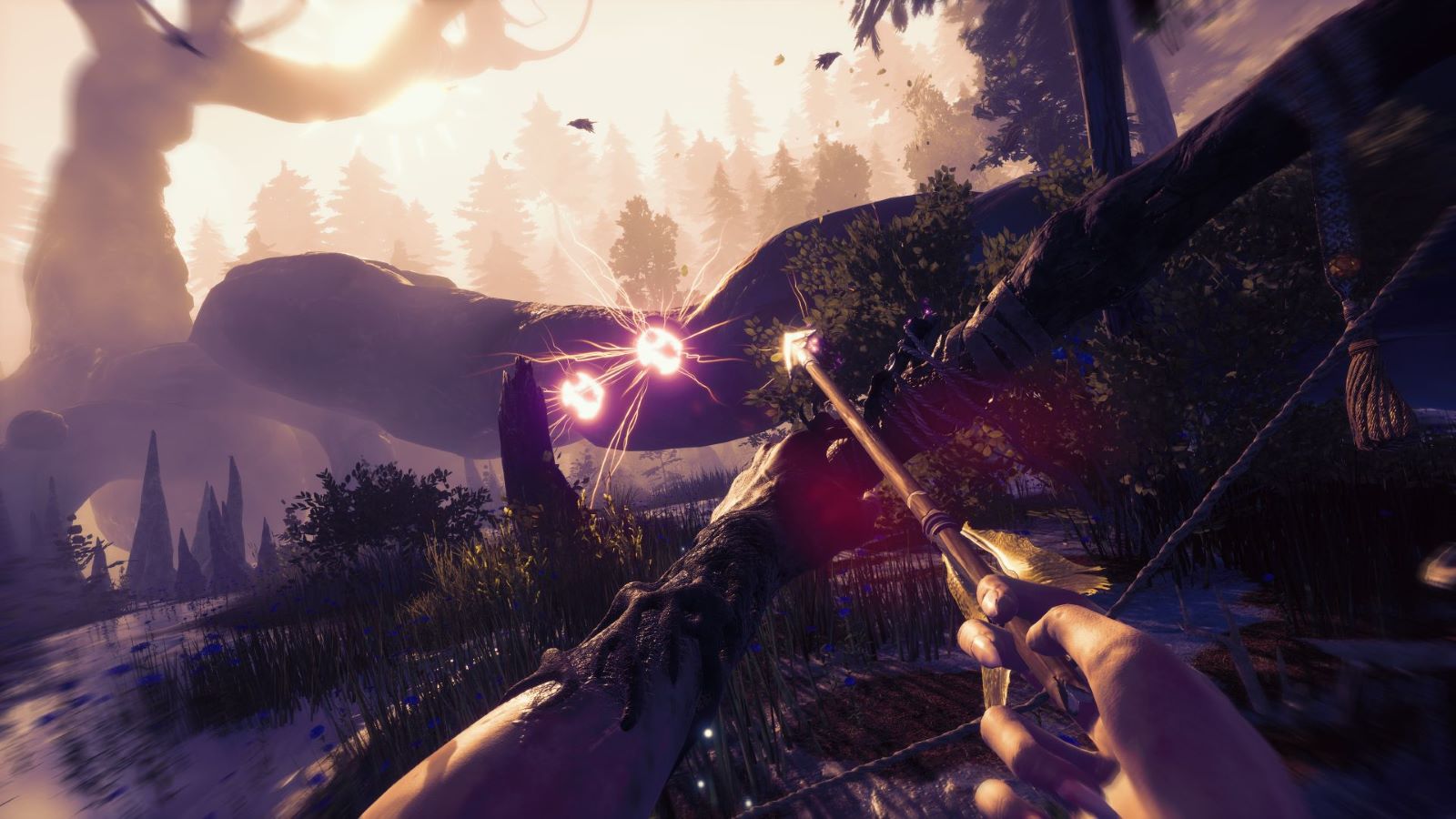 Blacktail isn’t without room for improvement. The music in the game is limited in the number of different tracks. Having a bigger variety of eerie and tense music tracks would elevate the overall atmosphere even more. I also would have liked more enemy variety. While the combat is satisfying, facing the same cyclops and bees feels slightly repetitive. I mentioned earlier that there is no melee attack with your bow, and that seems like a missed opportunity. Having to gather ingredients to make arrows is fine, but there are moments where running out of arrows means having to rely on magic. That causes problems when you run out of mana and are waiting for it to regenerate, as most of the magic attacks don’t do enough damage to be reliant upon.

Blacktail is brought to life by its setting, characters, and narrative. The gameplay doesn’t reinvent the wheel, but it doesn’t need to. It uses a system that works, and that compliments the rest of the game. Blacktail reminds me of Kena: Bridge of Spirits which I played last year; a well-executed title that sets itself apart from others, and one I thoroughly enjoyed.

Blacktail’s art and captivating storytelling take the narrative genre in a new direction. Backed by a combination of solid gameplay and in-depth moral system, the game excels in almost every aspect.

Noah is the resident weeb who spends most of his time gaming and watching anime. His goal is to expand his skills while meeting new people. You have probably seen him feeding the other team kills in Overwatch Comp or speculating Star Wars and One Piece. Follow him on twitter @RigsbyNoah.
Related Articles: Blacktail
Share
Tweet
Share
Submit