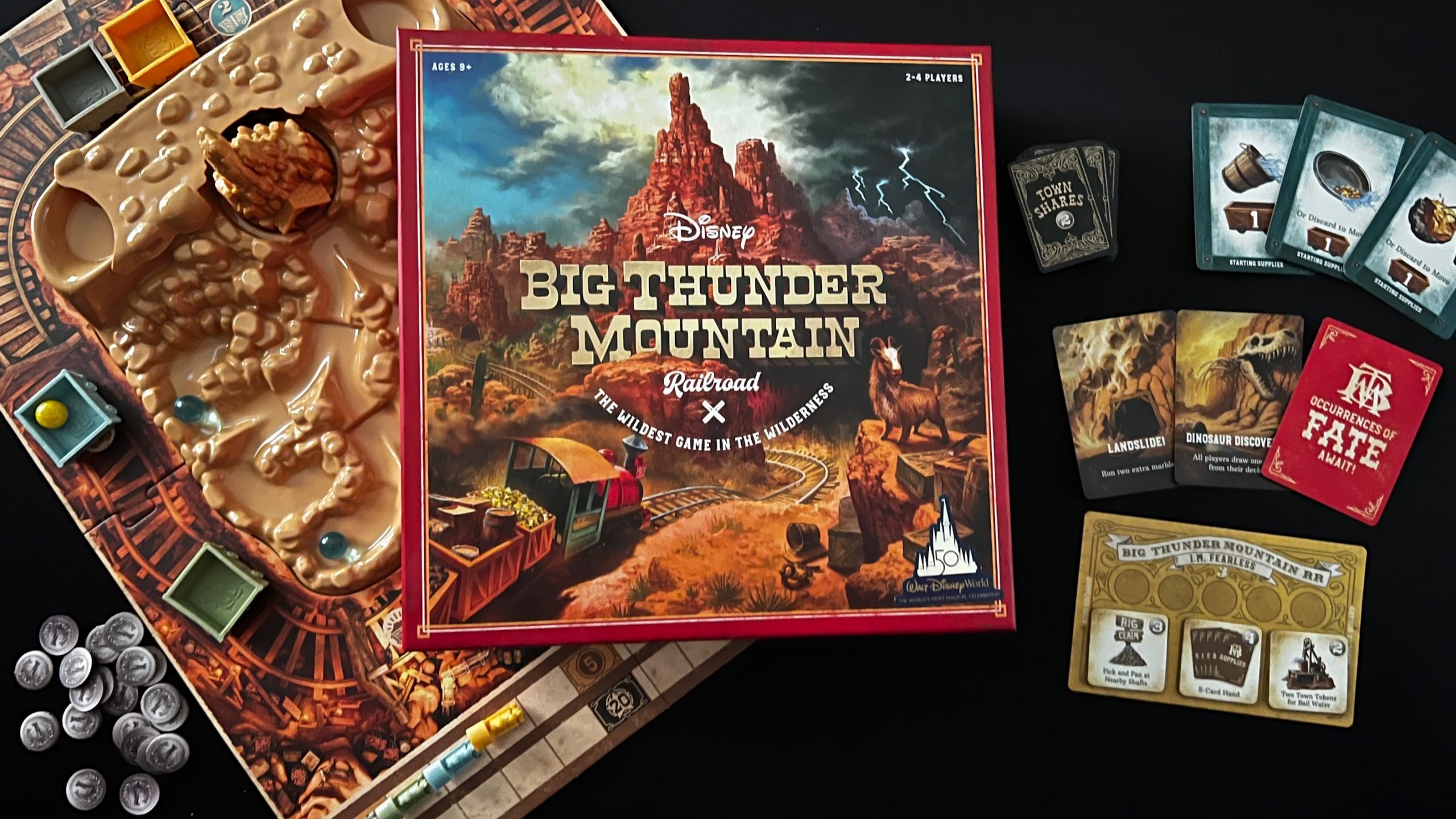 In the middle of Frontierland at Disneyland lies the Big Thunder Mountain Railroad – the wildest ride in the wilderness! Full of crazy drops and turns, riders are whipped around the mountain on a mountain train through tunnels, past mining equipment, and a goat chewing on dynamite. I recently got a chance to ride this coaster for the first time since I was a kid. The craziness of the ride has been distilled down into a family friendly board game that packs in some fun mechanics and strategy. 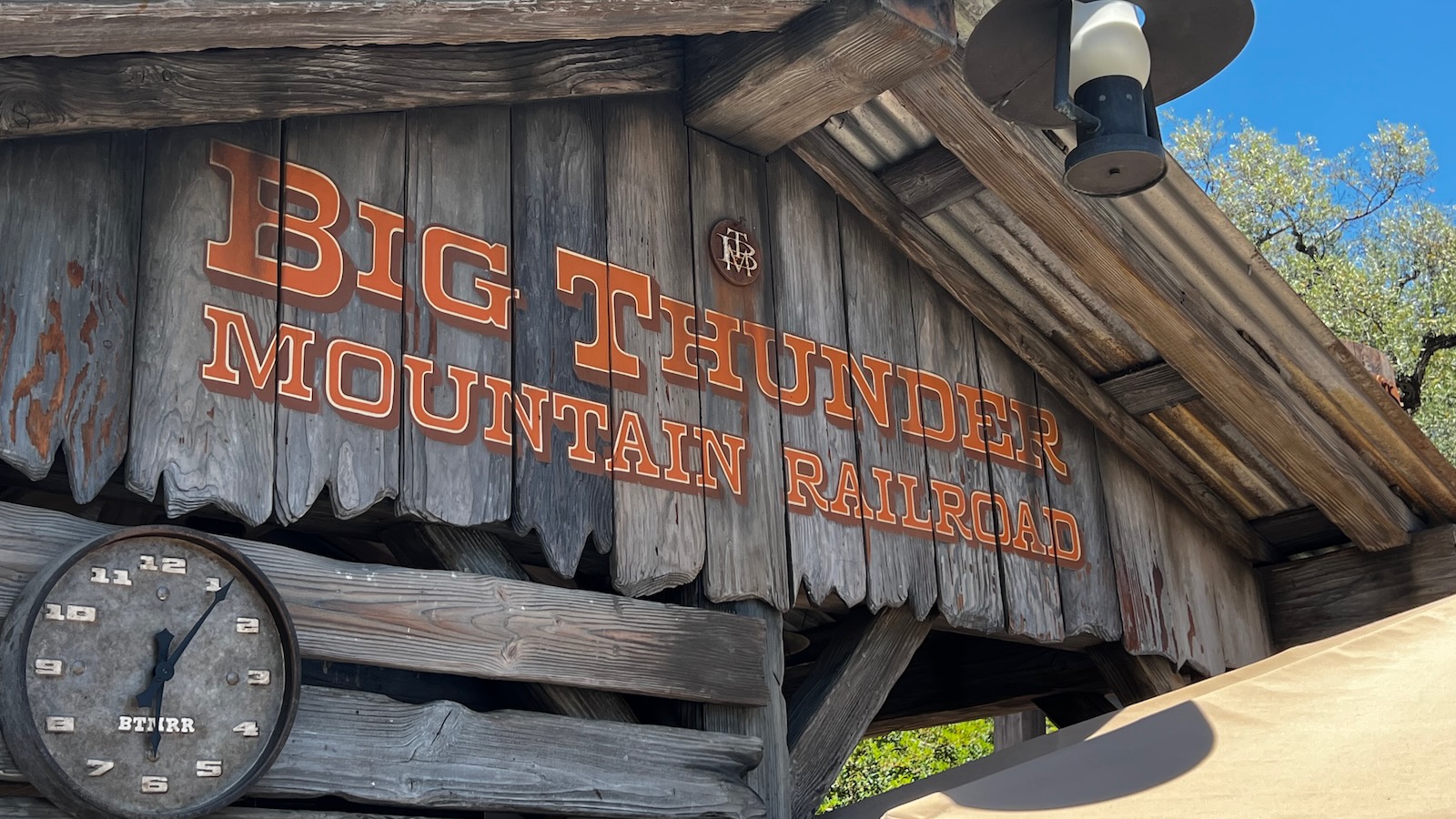 Big Thunder Mountain Railroad (BTMR) is a family game for 2-4 players ages 9 and up and is distributed by Funko Games and designed by Prospero Hall. Players in BTMR take the roll of miners racing their mine cars around the board to collect precious metals, shares of the town’s wealth, upgrades, and supplies all to have the most points by the end of the game. 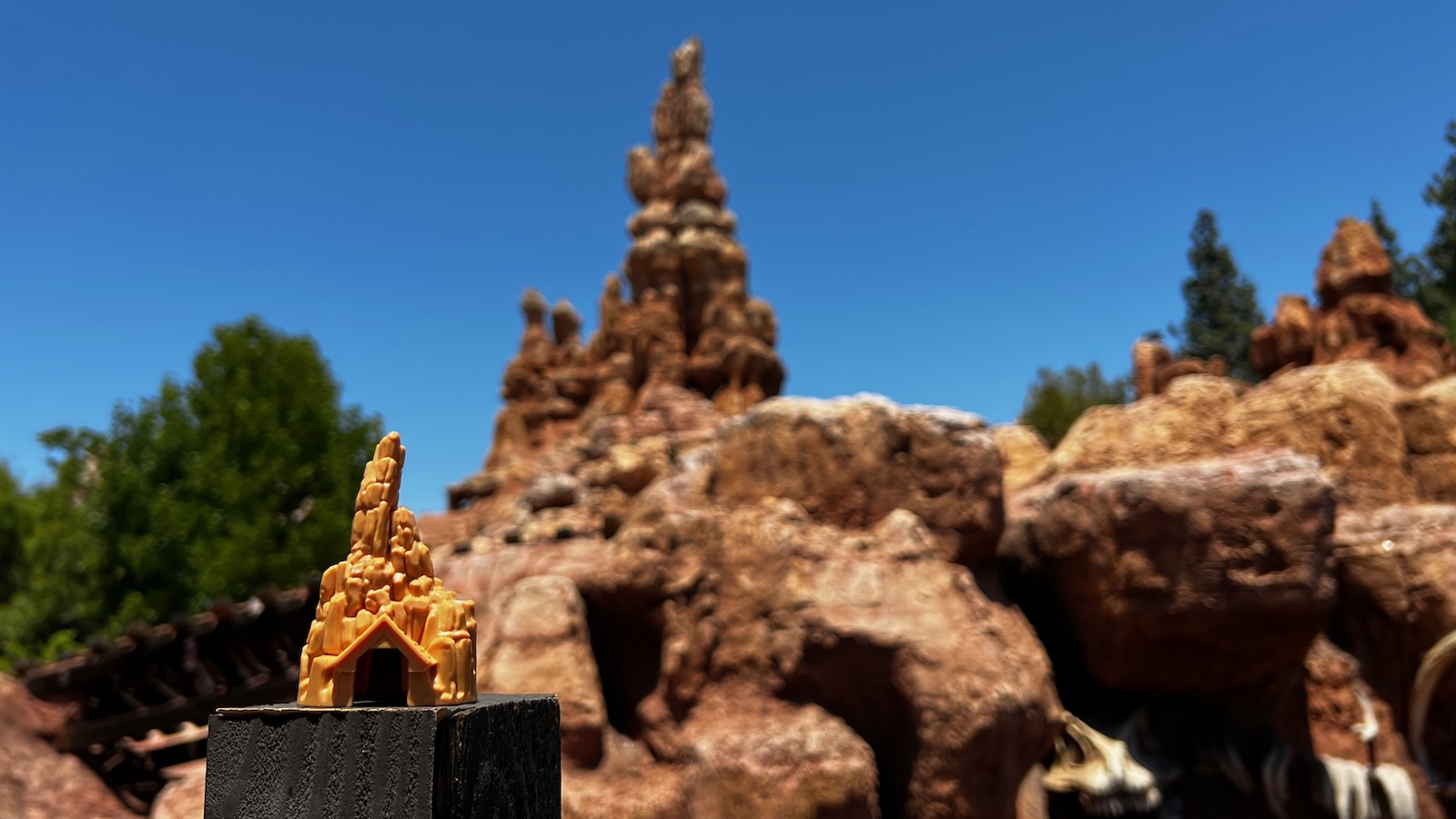 A turn in BTMR is divided into three steps:

When running marbles, players will turn the mountain peak clockwise until three marbles get sent down the mountain. The marbles in the game come in four different colors and each denotes a different thing. Gold marbles represent gold nuggets and can be collected and sold for two town tokens or points a piece. The brown marbles represent raw ore and can be collected and sold for one town token or point a piece. The blue marbles represent water and makes mining gold and ore more difficult for players, but also gives players opportunities to make some money by bailing it out of the mine shafts. The red marble represents fate. When this marble runs players must draw a fate card that can either help or hinder their progress. 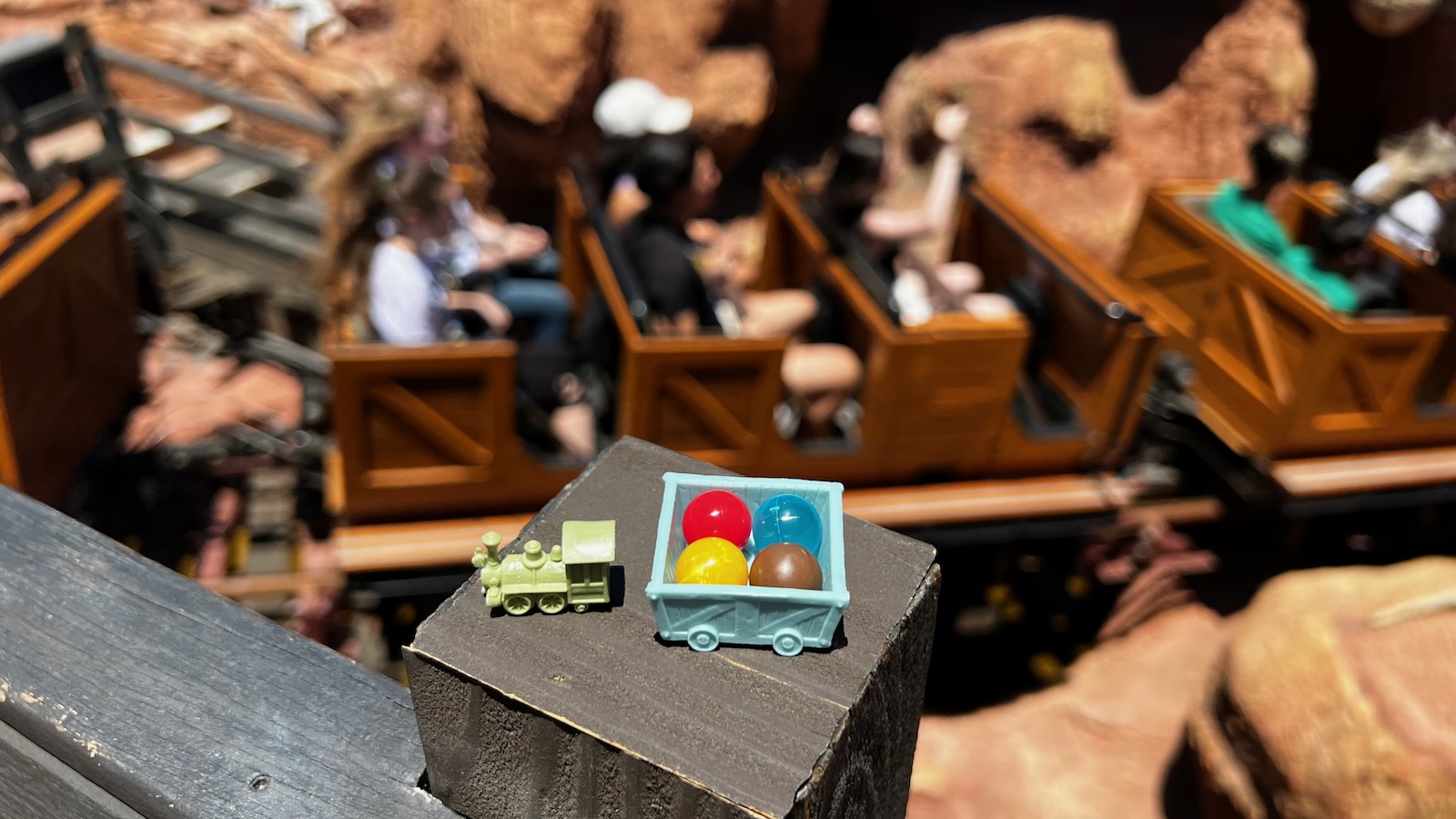 Each player is given a starter deck of cards and starts each turn with a hand of four cards. During the play cards phase, players may play cards one at a time as many times as they want. Each card comes with a variety of symbols allowing players to move, mine, bail water, or resupply their mining operation. Players will get to take each action as many times as it is shown on a card and can be done in any order. Players have the opportunity to gain new cards and upgrade their deck throughout the game. 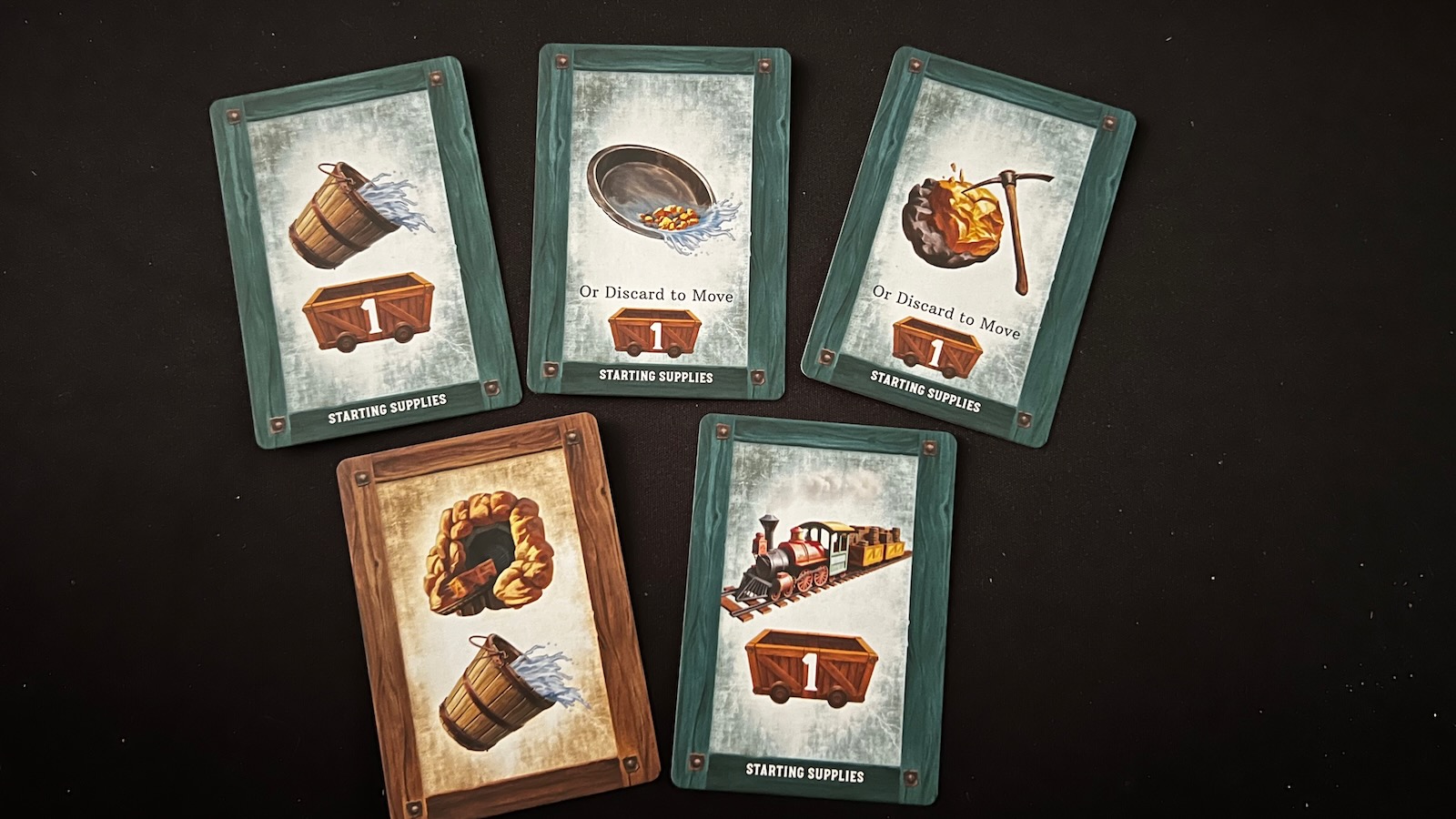 Moving allows players to move up to the number of spaces shown on their action card. Players will jump over other player mine cars as they move, but if a space is occupied when they plan to stop, the opponents mine car is bumped one space up on the board. Bumping can cause a chain reaction bumping other players down the track as well. In a mining space, players can collect gold or ore marbles into their card by playing “pick” if there is no water, or “pan” if water is present. The bail water action allows players to remove water from a space and collect a town token for each removed water. Players may also resupply by picking up a card from the supply board or play a crosscut tunnel action by running a marble and moving directly to where the marble landed on the board. 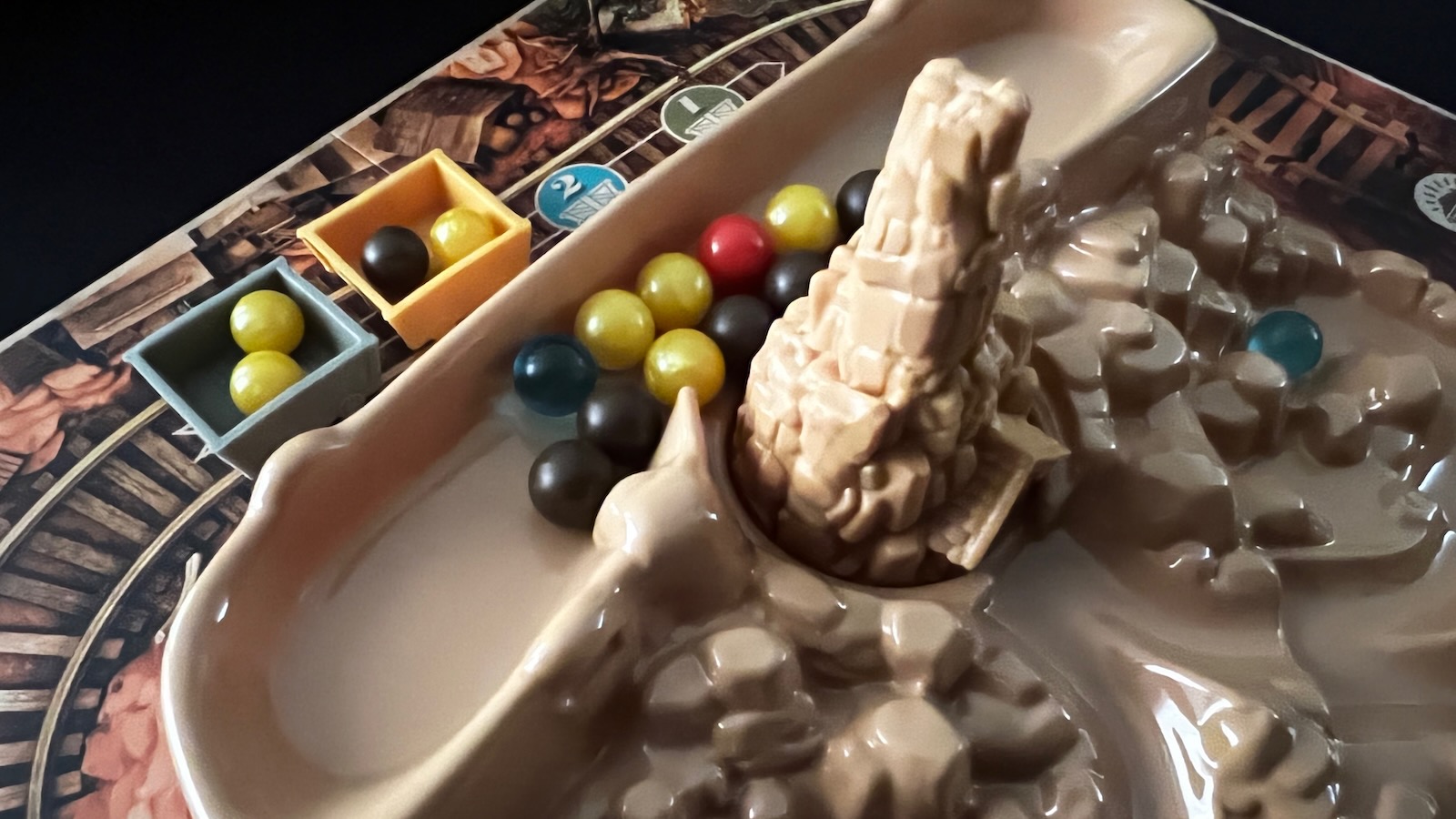 Each player has a town space on the back side of the board. The town space allows players to turn in marbles for town tokens or points. The town tokens can be used to buy town shares or upgrades. Each player can hold up to five town tokens and can buy up to three upgrades. The upgrades allow the players to amend the rules such as drawing five cards instead of four, gaining two town tokens when bailing water, and allowing players to mine from adjacent spaces on the board. Players can also spend town tokens on town shares that give the player end game points counted after the game has ended. Players can choose to take points instead of town tokens and move their token up on the scoring track. The end of the game triggers after a player passes the 20 point mark on the track. At the end of the game, players will sell any gold or ore in their mine carts, earning half as much as normal, and reveal any town share cards for final points. The player with the most points wins! 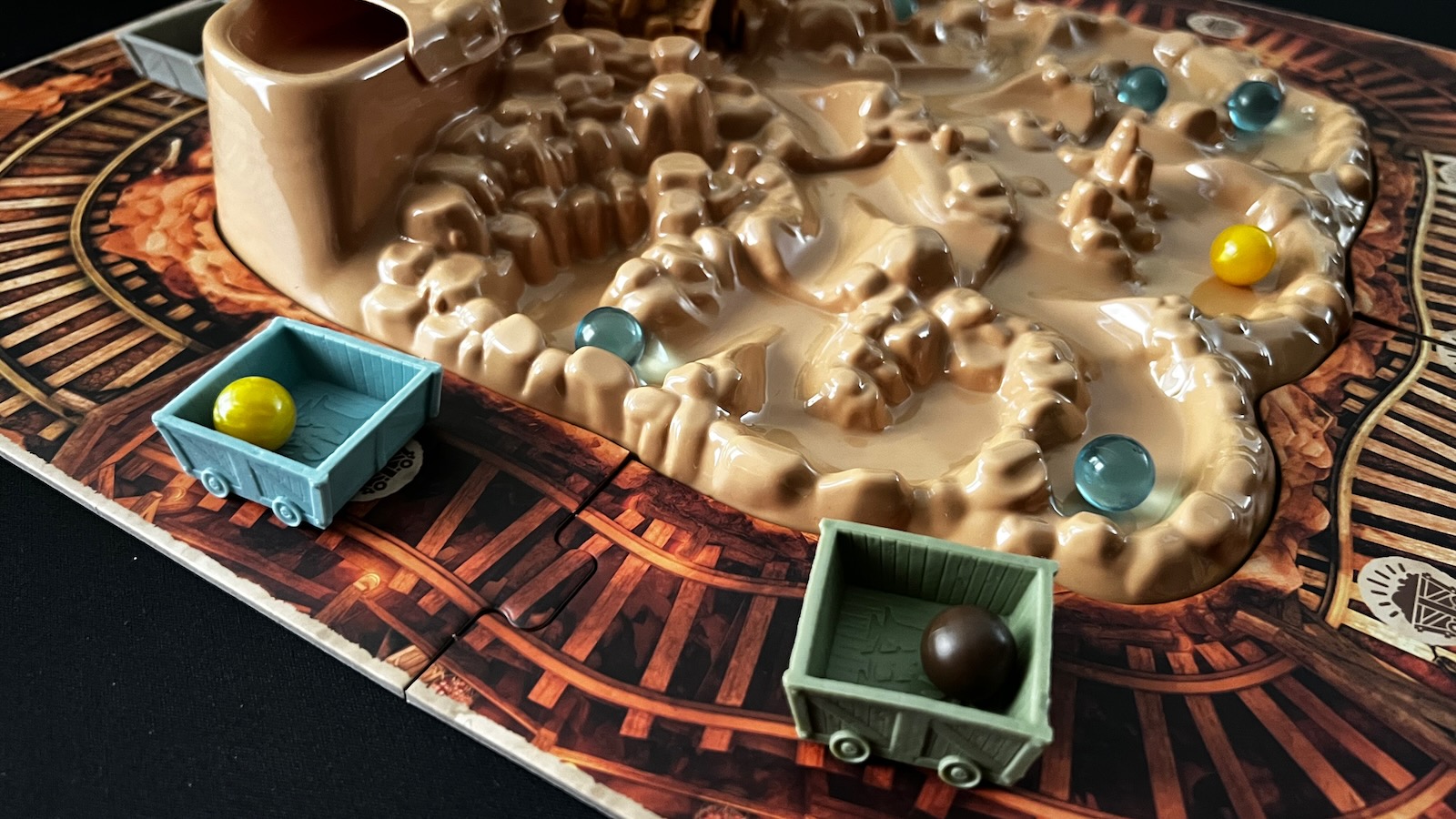 The production quality of the game is great! The marbles have a good weight to them and the plastic mining mountain is fairly sturdy, though a little glossy for my taste. The peak of the mountain is made of a quality rubber that makes it easier to turn than if made of the same material as the rest of the mountain. The cards are of a fair quality and the mine carts and train tokens are fun and colorful. A few drawbacks are the quality of the player mats and supply board. Having seen other Funko products, these could have been thicker cardboard rather than the thin and easily bendable ones included. The other drawback is the spinning mountain. The rubber from the peak and the plastic of the mountain cause too much friction and can make the peak harder to turn. One player essentially kept dragging the board across the table every time he turned the peak. The marbles in the well can also be finicky and mountain turning actions can take longer than needed just trying to get a marble in the opening. 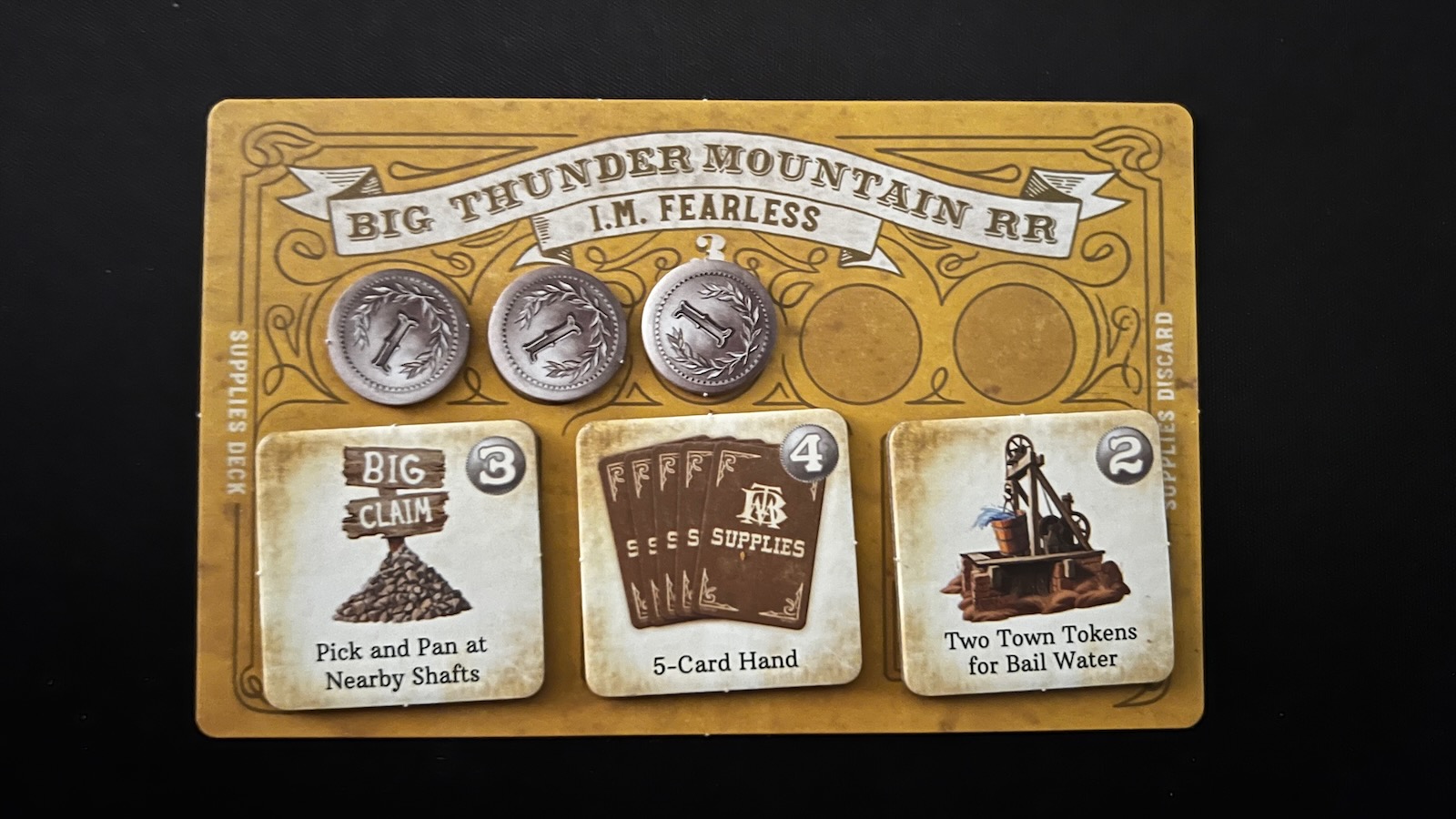 The gameplay is great for a family game. The pick up and deliver mechanism is fun and forces players to be strategic about what order they play their cards. It also forces them to think about what cards to gain from the supply, adding a deck building mechanic faintly reminiscent of games like Lost Ruins of Arnak and Dune Imperium. As players cycle through their decks, they hope that the cards they need come to the surface at the right time. The cart bumping mechanic is also a fun addition. Players can get knocked out of position forcing them to change plans they may have made for a given turn. This becomes all the more real the more carts you have on the board. The strategy of the game really comes down to a balance between upgrading your mining operation and taking points, which can add a little push your luck element to the gameplay. The red marble can also throw a wrench into your strategy. In one game, a player was bumped back to town without any ore or gold multiple times which caused them to be so far behind in the game, they never really caught up. The marbles also have a tendency to shift towards the center and don’t have an equal distribution around the spaces. 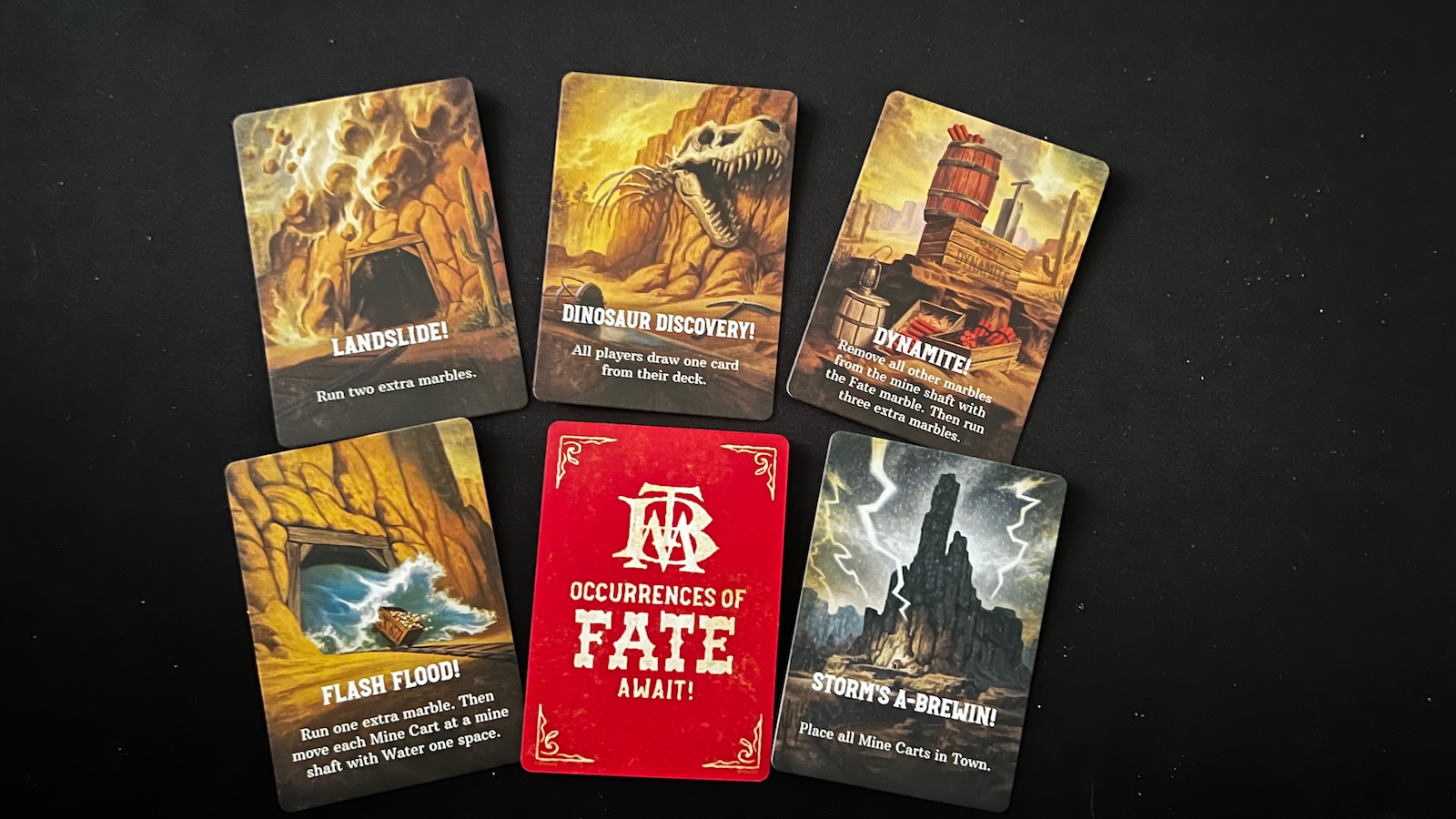 All in all, this is a great family game, especially for lovers of the Disney theme parks and the ride. The game takes the theme and distills it into a fun experience for everyone. While not a game I would pull off the shelf for hardcore gamers, it will be a fun one to get to the table from time to time with the nephews and reminisce about the trips to Disney.

Taking the coaster from Disney and putting it into a board game is no easy feat. With a blend of mechanisms and some fun strategy elements, this game is a fun family experience for anyone wanting a taste of old west mining adventures.