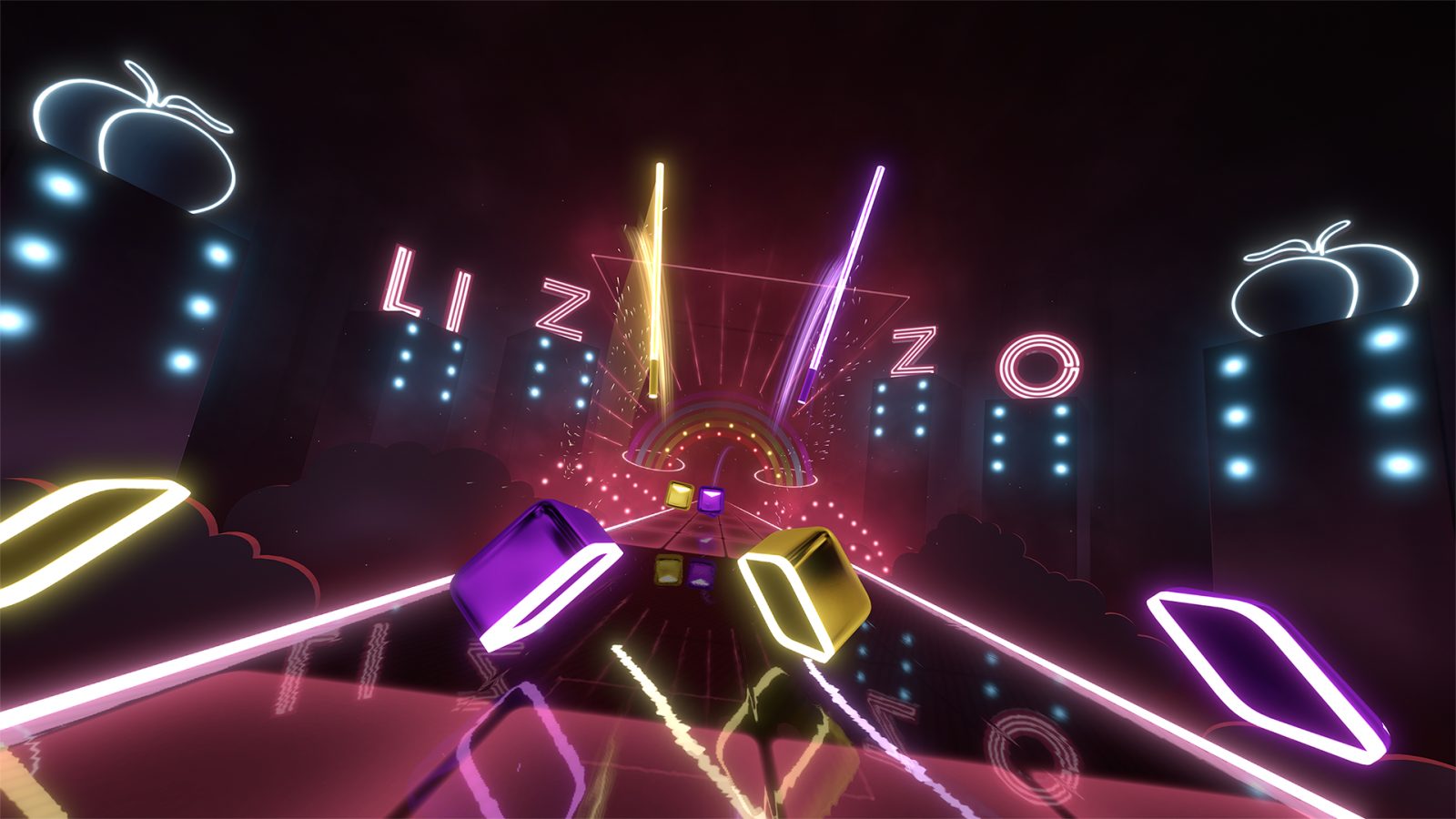 Because I apparently live under a rock, I hadn’t heard of Lizzo until this week. She recently played some historic flute at a concert, which instantly makes her pretty cool in my book. Regardless, my ignorance of the pop idol and inexperience with VR hit Beat Saber make me the perfect person to review the game’s latest pack. 3, 2, 1, let’s jam.

The Lizzo pack comes with 9 songs for about $12 or $2 for each song individually. These are: 2 Be Loved (Am I Ready), About Damn Time, Cuz I Love You, Everybody’s Gay, Good As Hell, Juice, Tempo (feat. Missy Elliot), Truth Hurts, and Worship. I have to say, most of these tracks are certified bangers and, as someone with very little experience in Beat Saber, their stages are very hard and give you a good workout. As I’m a newcomer to the series, I played all of these on Easy mode, but even then the motions you have to perform to hit the moving blocks to the beat with the correct color sword are pretty complicated. In fact, it actually feels like you’re performing a dance routine which is pretty cool and matches the theme.

Every song is playable on every difficulty, but it looks like you only have one mode for most of the pack, being the standard two differently colored swords mode. 2 Be Loved (Am I Ready) and About Damn Time do have a one saber option, however. It would have been nice to see each song come with all the modes, but as they are they feel very specifically designed and interact with the new stage in fun ways.

The new Lizzo stage is really nice – it looks like a runway with a crowd below you, a rainbow in the distance, and letters spelling out Lizzo towering above. Certain elements move to the music too, like lights and fog groovin’ along with the trumpet in one song. Thankfully, the stage is never distracting you away from the notes you need to hit, as every part of the stage appears more greyscale and dull than the brightly colored blocks. It’s very well designed, being unobtrusive yet fun to look at. 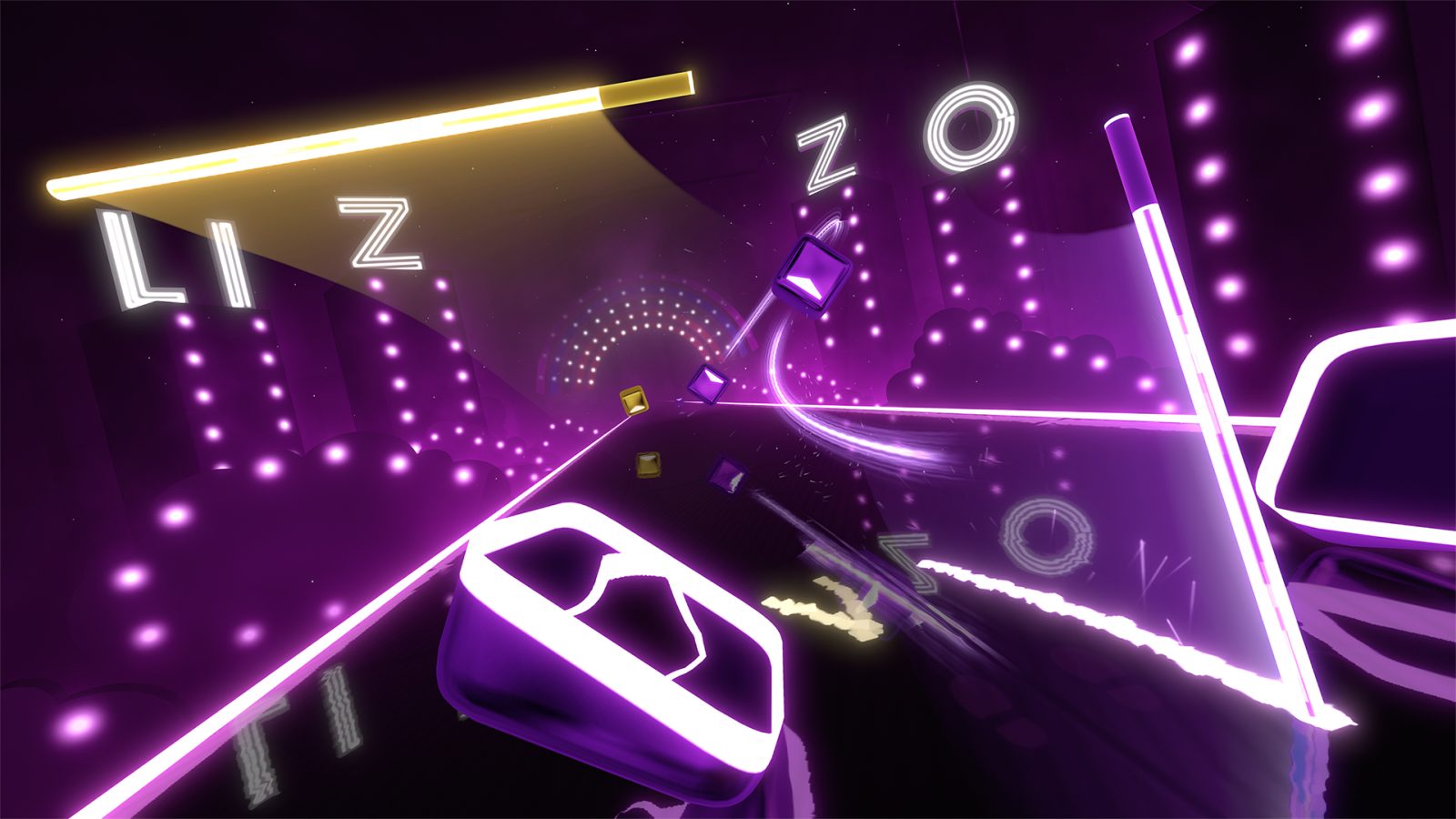 Of course, the songs themselves are the highlight here and they don’t disappoint. I don’t know how I hadn’t heard of her before, because Lizzo is making my kind of sound. It’s very poppy, but with a certain groove to it that will keep the songs in your head for days. In particular, my two favorites were 2 Be Loved (Am I Ready) and Good As Hell, but I really enjoyed everything up until Tempo. Past that point, there’s just a different vibe to all the songs that isn’t for me, but I also felt the stages matched the music much less. Before that point, you’re mostly slashing to the lyrics and background singers, but from Tempo onwards I had a hard time feeling like I was playing a rhythm game instead of just swinging wildly while some music played in the background. This could improve in higher difficulties and the rest of the pack more than makes up for a weaker back half, but these songs could have used a rework in terms of gameplay.

While the second half of Beat Saber’s Lizzo Pack is clunky, the first half more than makes up for it with incredibly catchy tunes that will have you (sword) dancing to the beat in a gorgeous new stage. Consider me a fan of Lizzo now, because these songs are definitely going to be the highlight of my daily workout.

David is the kind of person to wear his heart on his sleeve. He can find positives in anything, like this is a person who loved Star Fox Zero to death. You’ll see him playing all kinds of games: AAAs, Indies, game jam games, games of all genres, and writing about them! Here. On this website. When not writing or playing games, you can find David making music, games, or enjoying a good book. David’s favorite games include NieR: Automata, Mother 3, and Gravity Rush.
Related Articles: Beat Saber: Lizzo Pack, VR
Share
Tweet
Share
Submit