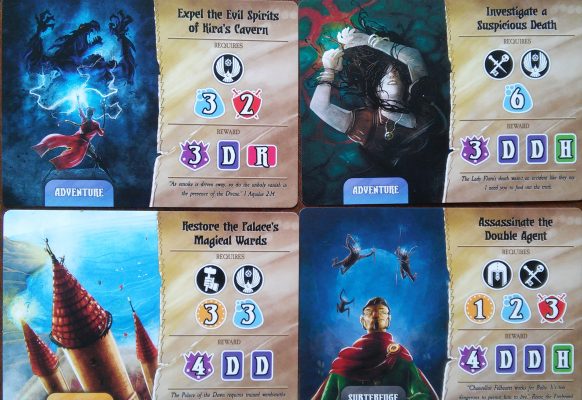 The Kingdom of Valeria reels, having survived an onslaught of monstrous hordes. Now, as it recovers, guildmasters seek adventurers to explore the wild and battle strange beasts while also seeking their own glorification. While last time you were a lord of in Valeria Card Kingdoms, building your fiefdom to prepare it for large-scale encounters, you are now dealing with matters personally, going to inns and finding the brave (or foolish) few to take on your work. The game is shorter than its predecessor but with all of its polish and flair intact.

Quests of Valeria is, in essence, a set collection game. You, the master of an adventurer’s guild, must gather citizens together to complete quests, but only certain types of citizens will fit for certain quests. Along the way, you have to contend with your rival guildmasters, who are seeking to hire the same citizens for the same pool of quests. The game is about strategically balancing resources in order to complete five quests before your competition.

Each quest has requirements in terms of resource and citizen type. Citizens have a type, such as worker or soldier, and resources they produce when you discard them. These resources include gold, strength, and magic, and citizens may also grant special actions when you acquire them to extend the usefulness of your turn. To complete a quest, you must spend citizens and resources of the required types. When you complete a quest, it grants you victory points and special actions you can use that turn. These special actions are often simple, such as being able to complete an extra quest, but managing your actions is a crucial skill.  Because of the balancing act of type, resource, and extra action, no citizen is categorically better than another. You have multiple quest types that need to be satisfied, and only by combining a number of citizens strategically can you make them truly useful.

The cards are of a pretty great stock. It takes a lot to damage them and may not even require sleeving unless, like myself, you have uniquely paranoid tendencies. Some of the card art is recycled from Valeria Card Kingdoms, and it’s a shame they didn’t use this chance to expand on the world, perhaps putting familiar characters in new situations or telling overarching stories through card art alone. That said, all of the art is fantastic, and as a whole, more consistent than the original game in terms of tone and style. The detail is exemplary on each and every character — these are people you want to see more. I often found myself stopping during play just to take in the sights depicted on the cards and pondering these characters’ stories. The details on their clothes, the expressions on their faces, and the surrounding environment pulled me into their histories.

These designs manage to be detailed without being busy. The characters also range across genders, body types, and races…if elves count.

Quest cards take the character cards’ exquisiteness to a new plane completely. The accompanying art, as well as their names and descriptive text, make me want to jump into this world. The 32 quests available are varied and fascinating, ranging from throwing an extravagant gala to negotiating with a reclusive wizards’ tower or vandalizing an evil artifact. I can definitely see myself using these as inspirations for future sessions of D&D.

Setup is fast and intuitive, launching you right into the game. Each player gets three citizens and a guildmaster card at random. These cards, which you keep secret, each give a one-point bonus for two out of the game’s four quest types. The quests they benefit from are the only factor to differentiate them from one another. There are no special abilities or goals otherwise, and they will only cause a conflict in the game if multiple players are seeking the same quest type. If you are determined to stymie another player’s efforts, you can determine their role by watching carefully, but doing so would not have crucial impact.

You also place six random quests face-up and lay out random citizen cards along a row with increasing gold costs, as such: 0, 1, 1, 2, 2, 3. As you purchase citizens, they slide left to fill the place left behind, replenishing from the deck. Citizens farther left will be less expensive, but as you wait for them to tick down, you run the risk of someone picking them up early. If a specific citizen is crucial to your strategy, you may want to grab them whatever the cost to ensure that you can use them before anyone else.

Turns are as simple as the purchasing mechanic.. On your turn, you take two actions of any combination from a list of four. You can draw a citizen from the top of the deck into your hand for free. This is a cheap action but a risky one that may not grant you what you need. You can also hire a citizen in the guild for the appropriate cost. You can reserve a quest from the tavern, so that you are the only one who can complete it, or remove all cards from the tavern and reserve one of the new ones. This is a crucial action that can thwart other players’ efforts or preserve something integral to your strategy. Your time is limited, so knowing what to set aside and what to let go could mean the game. You have to know when to take quests, to keep them from other players. However, doing so will telegraph the citizens you need to anyone paying attention. Finally, you can use the correct citizen types and resources to complete a quest, granting yourself extra actions and victory points.

The game ends when one player has completed five quests. Everyone remaining in the turn order gets to finish out the round, and the guildmaster with the most victory points, including bonuses, wins.

Clocking in at a reliable 45 minutes, Quests of Valeria is fast in terms of setup, teardown, and learning curve. Brand-new players will gain a firm grasp on the game quickly thanks to reference cards each player can use during the game. These are clear and comprehensive, giving players an accurate picture of the game’s structure before you ever open the rulebook. Having such an easy reference available prevents the number of symbols on citizen and quest cards from ever feeling overwhelming.

Quests for Valeria is best played with 3-4 players. At two players, the game boils down to a race, which forces you to pass on some of the more interesting strategies available when playing with the max number of players. And if you have guildmasters that don’t conflict in terms of goals, you’ll miss even more. At the maximum of five players, the wait between turns becomes too long, and given how much can change between rounds, your strategy might have to readapt every turn. There is a solo mode that gives one player limited time to obtain the highest score they can, but there didn’t seem to be enough to strategize around to give this mode much longevity. The puzzle is a fun distraction, but not one you can get much out of replaying.

The drawback of Quests of Valeria being a quick, intuitive experience is that it lost its depth on its quest to become fast-paced.. There are limited strategies you can employ to win, and all of them involve the same key skills, such as knowing when to expend your resources. The battle of resources you play with other players is a blast but one that makes up the majority of the game. It is especially problematic that resource management takes some flavor away from the quests. Each quest requires spending resources. Whether a quest requires strength or magic makes a nominal difference; the mechanism you employ is the same either way. Monster slaying and intrigue are functionally identical.

Additionally, using citizens for quests routinely expends the resources you have gathered. You do have some ways to chain combos to gain extra actions based on which quests you complete, but you still start at a near-zero point after every quest, forcing you to rebuild along the way. This makes it difficult for Quests for Valeria to have an established arc over the course of the game. You build up, spend, and repeat. There are important strategic choices along the way, including trying to build for multiple quests at a time, but even these burn out eventually as you expend resources to move forward.

In many ways, this all feels intentional. Without the bells and whistles that other set collection games have, you keep yourself focused on the options in front of you and how other players might exploit those same options. You find yourself actually able to keep track of other players and counter them, something lacking in similar games. Usually there are too many moving pieces to get any sense of what other players are looking for or be able to counter them yourself. You still feel that something is missing, but not that those missing pieces were left out without consideration.
Quests for Valeria
Designed by: Isaias Vallejo
Published by: Daily Magic Games
Players: 1-5
Age Rating: 8+
Time: 45 Minutes
Mechanics: Set Collection, Drafting, Hand Management
Weight: Light
MSRP: $25.00

Quests for Valeria takes some familiar ideas of set collection and resource management but refines them and boils them down to their essence. It is a tight, satisfying experience but lacks the depth that would have made gameplay feel more varied.

John Farrell is a legal aid attorney specializing in domestic violence, living in West Chester Pennsylvania. You can listen to him travel the weird west as Carrie A. Nation in the Joker's Wild podcast at: https://jokerswildpodcast.weebly.com/
Related Articles: Quests of Valeria, Tabletop
Share
Tweet
Share
Submit