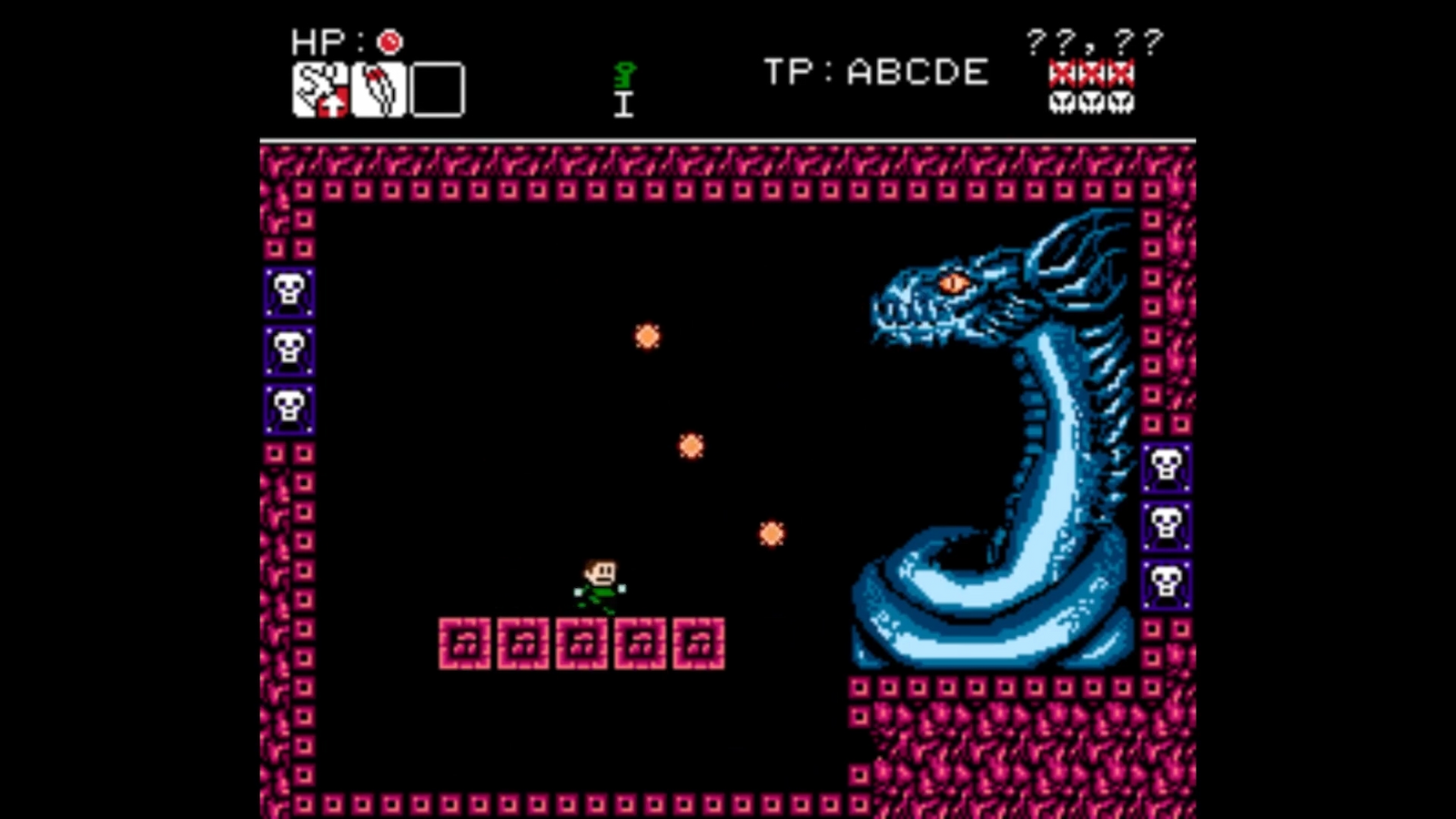 All little Timmy wanted was to do well on his test for the combat training program at the Disch Corporation. Little did he know that he was going to be the one to save the day and stop a possible catastrophic event from happening. After the exiled betrayer, Chester, busts into Disch and steals their secret plans to build a Supermech, Timmy has to grow up quickly, donning a special combat suit and following Chester to the Fortress of Peril.

Initially released back in 2010 as an NES exclusive, yes you heard me right, Battle Kid: Fortress of Peril is a true blast from the past. Bearing all of the iconic features from the cartridge-gaming era such as well crafted 8-bit graphics and music, classic platforming, the unforgiving difficulty, and even a password system, this title does a fantastic job at bringing the retro gaming experience to the modern day.

My personal time spent playing retro titles is slim and the most appropriate way to describe how I felt while playing would be frustrated and annoyed. So when I say I found myself genuinely enjoying this game, that has a little more impact behind it. With over 550 unique rooms, 30 enemy types, and 8 bosses, there was never a dull moment while traversing the Fortress. 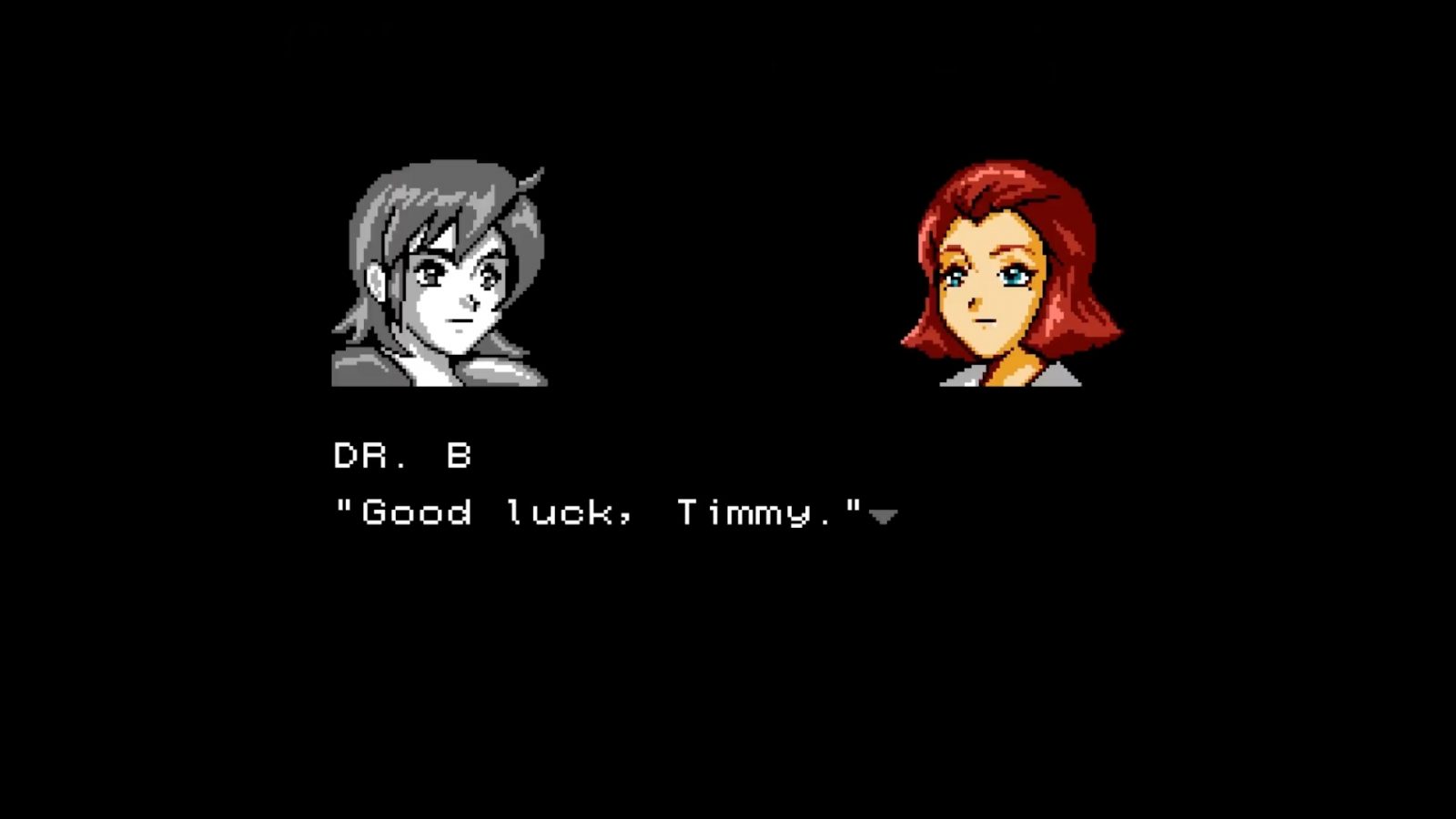 In all its 8-bit glory, it was evident that the creators of this game are retro gaming fanatics. I was impressed with how much this game just felt like a high-class platformer for the NES based on looks and sound alone. With great character art, various environments, and catchy music to go with every location you find yourself in, I was charmed to say the least.

Staying true to platformers of the past, the gameplay, while very simple, is fluid and satisfying. Jumping your way through rooms, blasting enemies in your path, and dodging both projectiles and instant death traps, always felt great and very rewarding when I was able to do these tasks without dying. Dying, however, is something that you should expect to do while playing this game. A lot of dying.

After my 138th death, yes there’s a provided death counter, and not even being halfway through the game, I finally realized what made it fun. The key factor was none other than the difficulty itself. While there are five difficulty options, none of them seemed to have truly been “easy” as they didn’t change what you came across while playing. I played the game on Normal which gave Timmy three HP and unlimited continues. Although three dots on your health bar may seem like enough, these three chances felt like one most of the time. Each room was filled with varied enemy types and traps that only after trial and error was I finally able to scrape through without dying. That constant cycle of dying several times after approaching a new room led to the addictive nature of the gameplay. Constantly being defeated, yet still feeling that sense of progression every time I overcame a tough room or boss battle, made me want to keep playing the game. The difficulty was both a blessing and a curse however. 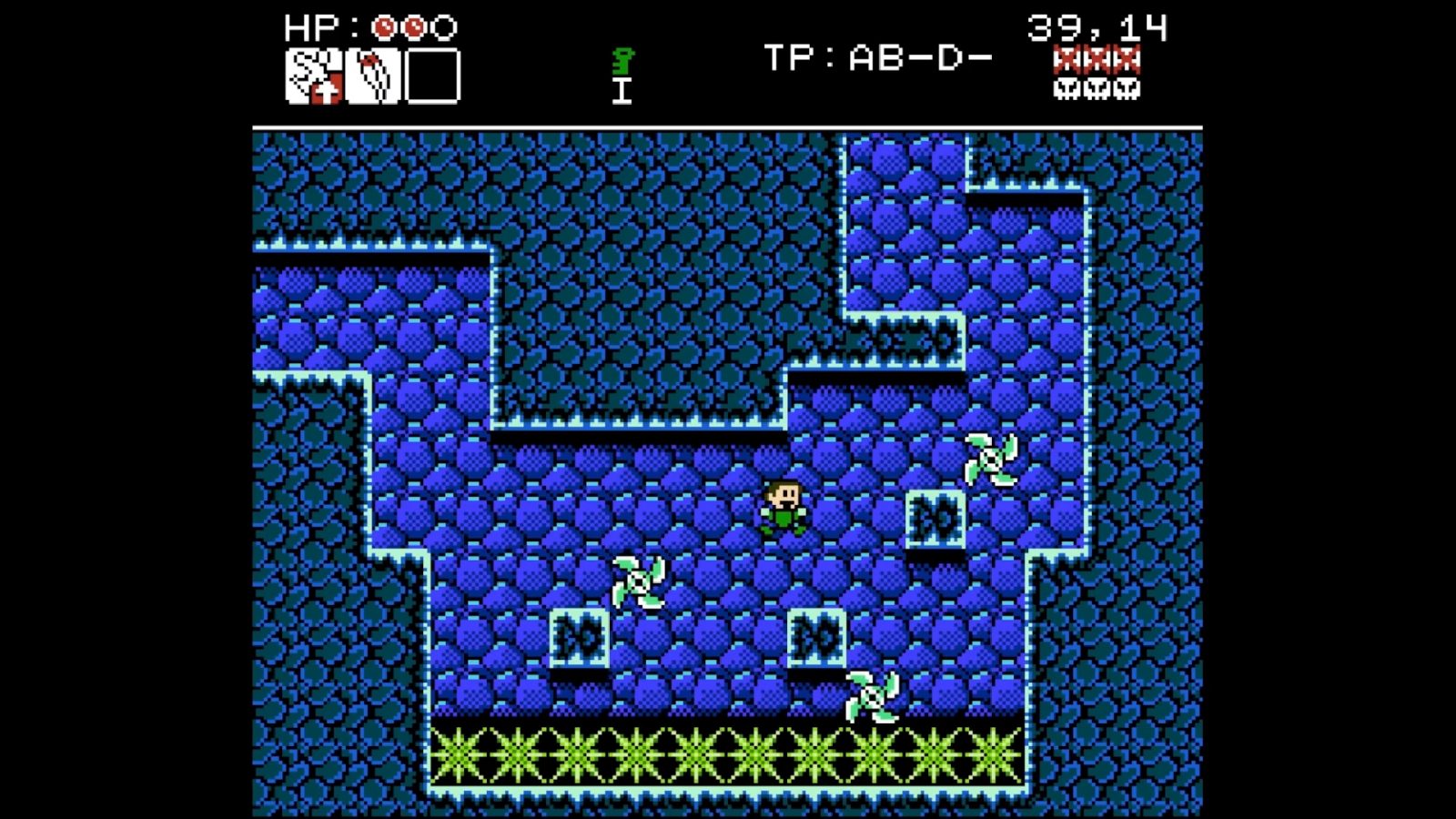 As previously mentioned, there are 8 bosses present in Battle Kid: Fortress of Peril. The structure of the game pretty much boils down to coming across a checkpoint, making your way through several rooms, coming face to face with a boss, rinse and repeat. While finally getting to the next checkpoint or overcoming a tough boss always left me satisfied, thanks to both the gameplay and difficulty, there were moments the game felt sluggish and flat out annoying due to how unforgiving it could get.

In particular, there were rooms that included spikes that would fill the screen. In these rooms were safe spots that weren’t being occupied by spikes and in order to get to them, you would have to wait for the spikes to disappear. They would only disappear for a small amount of time however, forcing you to rush to those safe spots before they reappeared. Now here’s the kicker, upon contact with the spikes, you are instantly killed. At first I really enjoyed these rooms as they offered a change from the typical heavy platforming and enemy riddled areas. However, after struggling through upwards of five of these rooms consecutively, my patience wore thin. This goes for a lot of the segments between each checkpoint, especially the longer I played in one sitting. 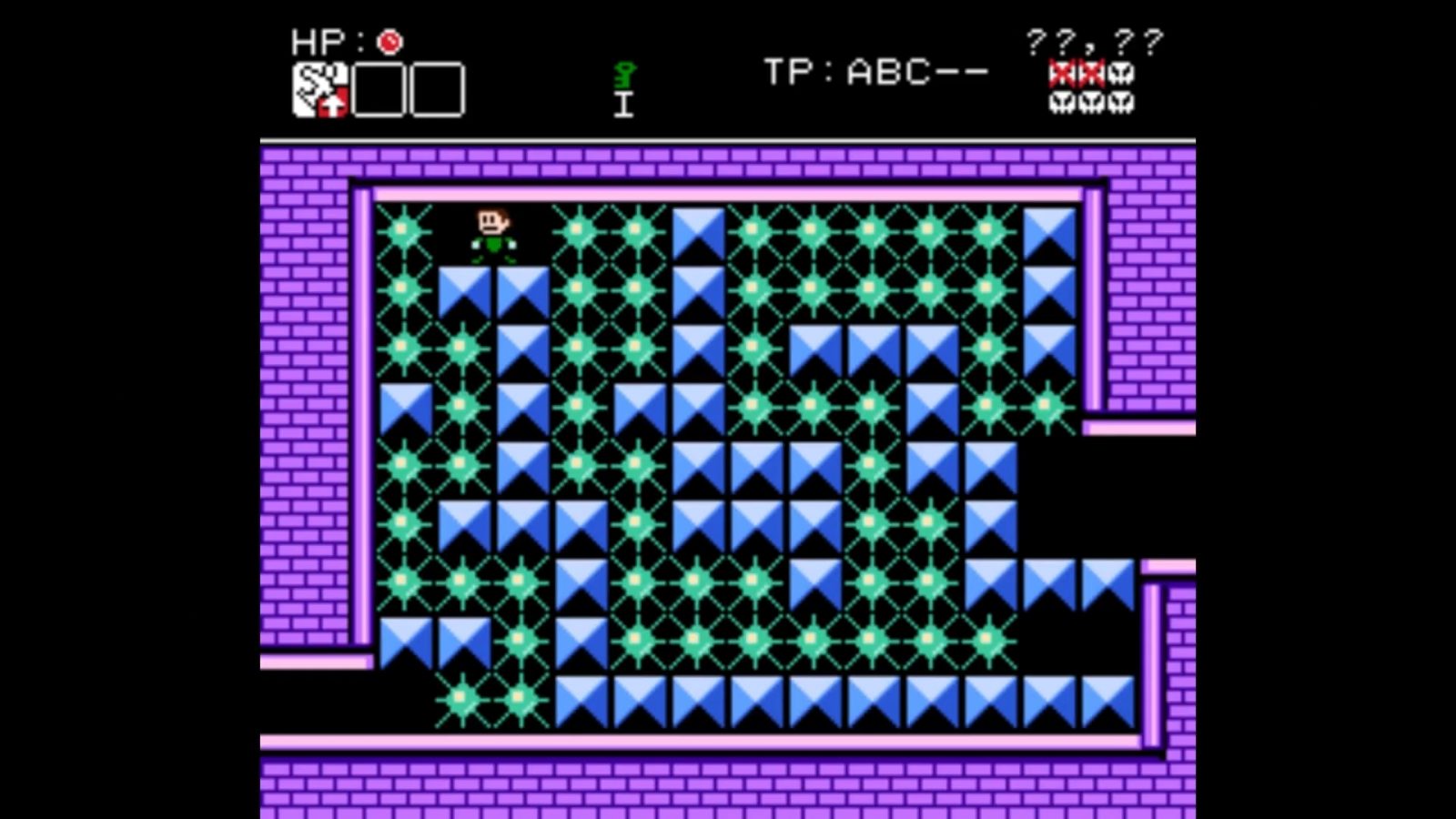 To combat these portions that can feel long and frustrating, there are Metroidvania-style upgrades that allow you to explore previously unreachable areas. These upgrades are found throughout various locations in the Fortress. Whether it be a higher jump, the ability to break new block types, or slowing down your fall speed, these abilities and items enhance the gameplay for the better. In addition to this, the aforementioned checkpoints are probably the most forgiving part of the game. There always seemed to be a checkpoint at just the right spot and that went a long way in preventing me from completely giving up at points.

Another way these upgrades benefited my experience with the game was that it made me really feel my progression. Being able to utilize the new abilities in combat or platforming had a drastic impact on sustaining my engagement while playing. Perhaps the most notable times that this progression shined were the boss battles. 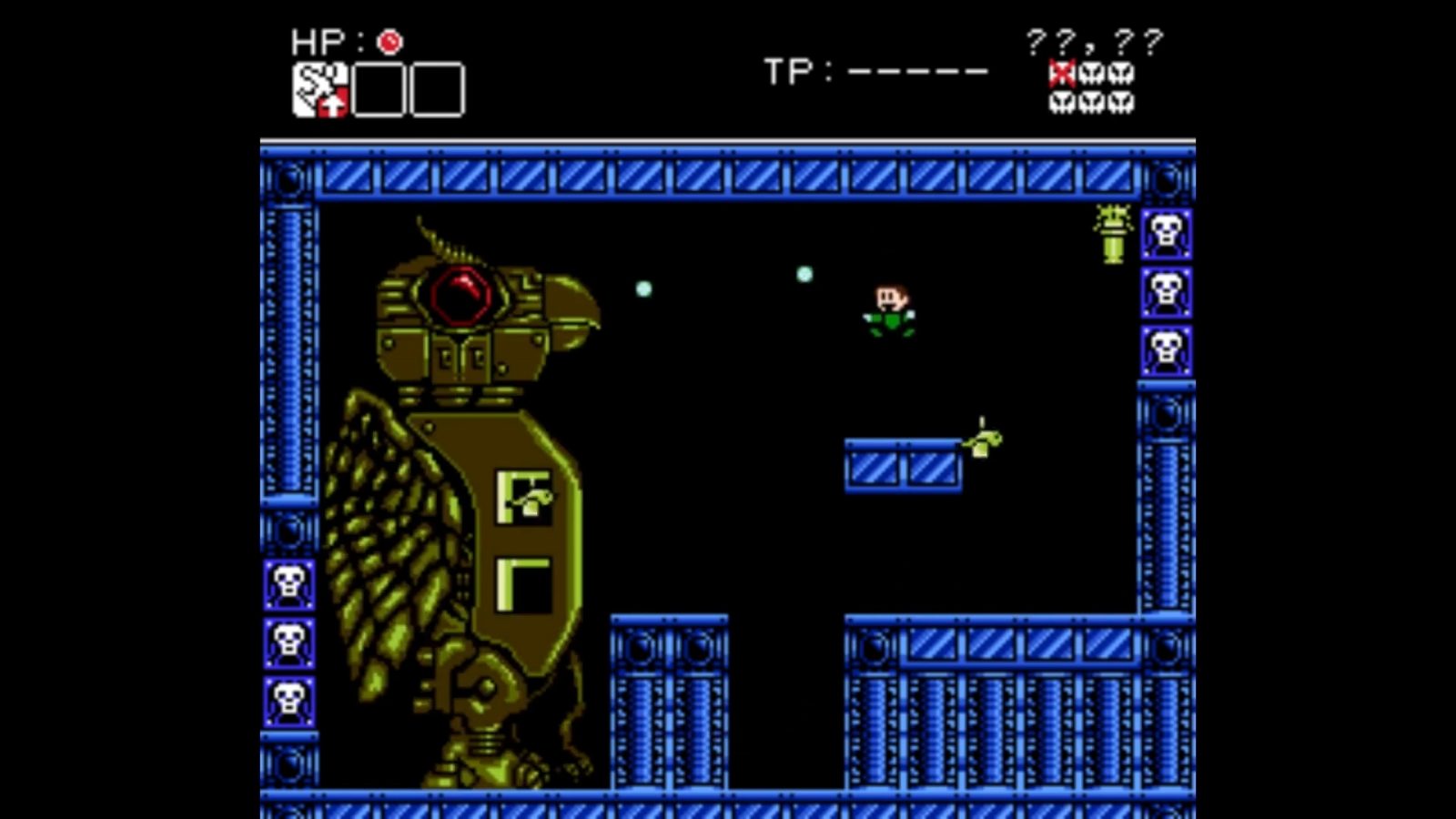 These fights were my personal favorite moments of the game. Walking through the skull doors and coming in the presence of these 8-bit foes, learning each of their attack patterns, and finally besting them in battle, never failed at being anything but fun. Sure there were moments where certain bosses’ quick flurries of attacks or moves that called for perfect jump timing led to some rage, but these were overshadowed by the intensity of getting some quick shots in while dodging and the pleasure of hard work paying off in the end. During these battles I was the most focused and engaged than any other time while playing, and that right there is the main reason these boss fights were my number one motivation to progress the game.

While I was never very fond of retro games, Battle Kid: Fortress of Peril finally opened my eyes and showed me why this style of game was and still is loved by many. Even with a difficulty that left me frustrated and hopeless at times, the fluid controls, familiar platforming, and simple but very effective combat, makes the game a great choice for retro platforming fans and still a fun time for anyone looking for a challenge.

Battle Kid: Fortress of Peril is a traditional 2D platformer that stays true to its NES roots. Its simple controls and charming 8-bit qualities make it a no brainer for any retro gaming fan. The over-the-top difficulty, while a little too much at times, creates a satisfying experience overall, making this a great game for anyone seeking a challenge.

Grant has a strong passion for video games. He is especially fond of PlayStation and Nintendo first-party titles, his favorite games being God of War (2018) and The Legend of Zelda: Breath of the Wild. When not gaming or writing for Gaming Trend, you can find him making a fool of himself on his YouTube channel Granttron.
Related Articles: Battle Kid: Fortress of Peril
Share
Tweet
Share
Submit