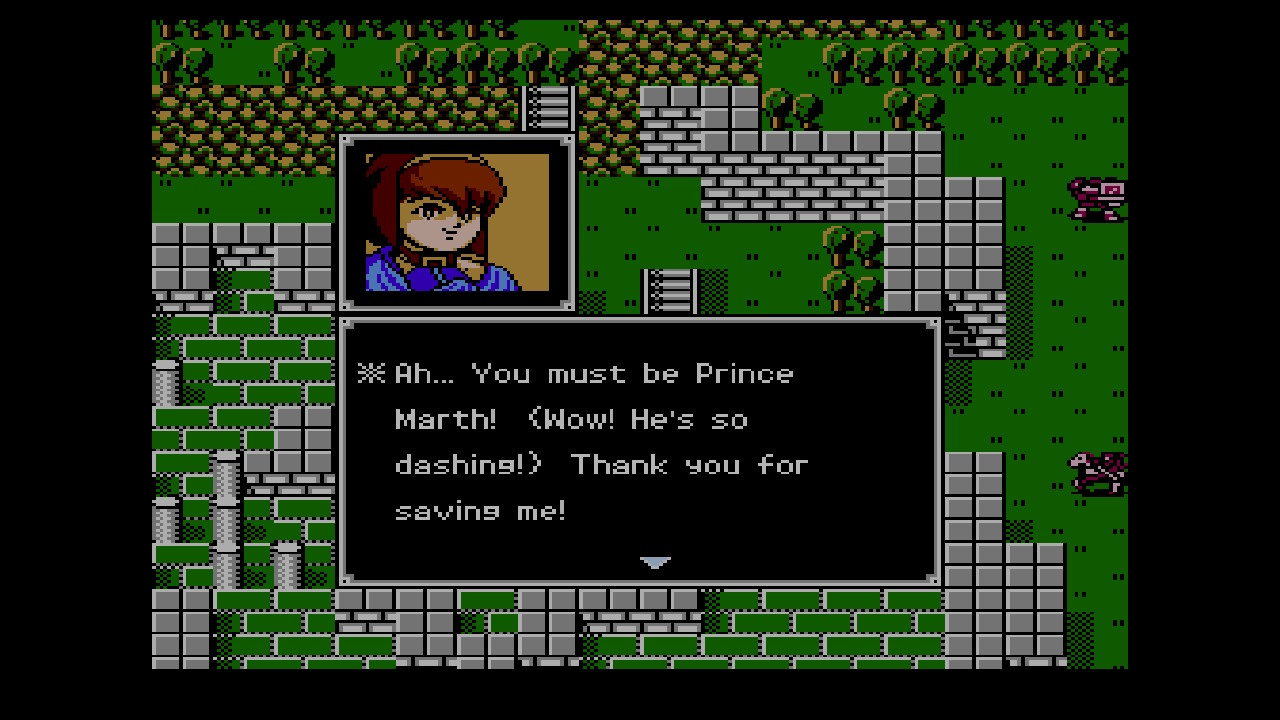 The Fire Emblem franchise has had a wild and tumultuous history. While its newest entry, Three Houses, is extremely successful it’s widely known that Awakening on 3DS could have been the end of the series thanks to previous titles’ poor sales. Since FE didn’t leave Japan until 2003 with Blazing Blade, simply titled Fire Emblem outside of its home country, there are quite a few games yet to be translated into English. 30 years after its original release, the first game has finally made its way westward as Fire Emblem: Shadow Dragon and the Blade of Light, but how does this NES game hold up after all that time?

Shadow Dragon follows Marth, prince to the kingdom of Altea, as he leads an army to take back his homeland and defeat the evil Dohlr empire with the ancient dragon Medeus at its head. While his plucky band of heroes starts small, he’ll need to recruit powerful new allies on the battlefield to stand a chance against overwhelming odds and foes who can permanently kill his friends in an instant. If you’ve played any game in the series, you know exactly what to expect in Shadow Dragon: a strategic and difficult adventure where you move units individually around the battlefield to attack enemies. While this game may not have various mechanics introduced later on like support conversations, explorable areas, or even the weapon triangle, this is still a rock-solid foundation that every other game was built on.

Going in, I expected to be a little underwhelmed by Shadow Dragon’s gameplay, but I’m happy to say I was totally wrong. Each map is a ton of fun to fight through and, even if I’ve shied away from it in the past, the permadeath adds tension to every moment. There were more than a few times that my palms got so sweaty (mom’s spaghetti) I had to take a break after finishing the chapter just to destress. Make no mistake, the original Fire Emblem is a tough game, but that difficulty makes it all the more rewarding to finally figure out a strategy that works and absolutely decimates the enemy force.

What didn’t surprise me was the lack of any substantial story, this is an NES game after all. The translation is well written, sure, but there’s not a whole lot of text to begin with. You get a bit of narration or dialogue before and after a chapter, as well as a line or two when recruiting a unit, but that’s basically it. While I would have liked to get to know Marth and crew more, this is somewhat to the game’s advantage of making the permadeath system easier to work with. After all, it’s easier to let a unit sacrifice themselves when they have literally no personality or defining traits. On the flip side, Shadow Dragon has been remade and expanded upon several times, with remakes on both the SNES and DS, and it’s a shame those weren’t included here. 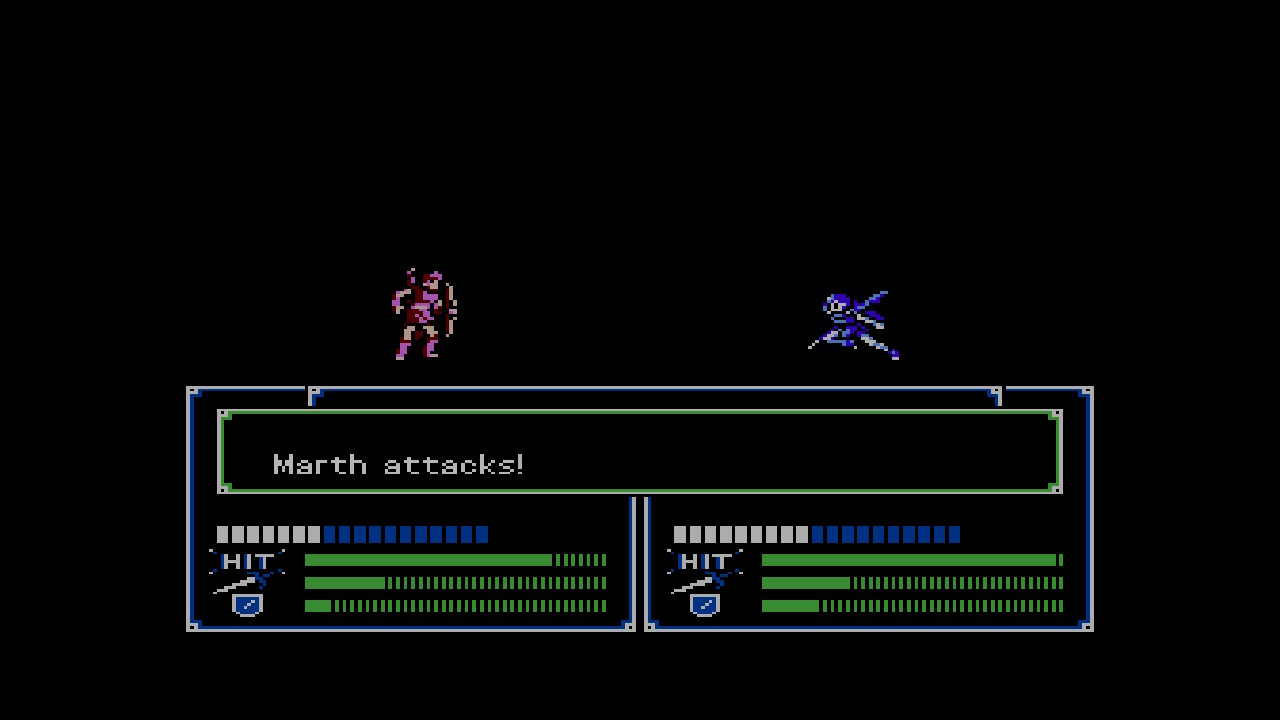 For a release that claims to celebrate the beginning of a storied franchise, Shadow Dragon and the Blade of Light feels like a very low effort port. The game is emulated using what seems like the same emulator from the Wii and Wii U Virtual Console so the screen is significantly darker than the original game. There are a scant few convenience options added, like a turn rewind, two screen size options, and the ability to save a single bookmark (read: savestate). The screen sizing allows you to choose between either normal or pixel-perfect modes; the former uses the standard, non-square pixel sizing seen on original hardware while pixel-perfect makes everything nice and square. This is entirely up to personal preference, I opted for normal mode while I’m sure others will use pixel perfect, but you can’t then scale the image to fill more of the screen which can be annoying in portable mode. The bookmark and turn rewind features feel tacked on, even if they saved my butt more than a few times. As stated before, you can only have one bookmark at a time, and loading it will reset the game to the state you saved it in, settings, saves, and all. Turn rewind works the exact same way; they’re just savestates created automatically at the beginning of your turn.

The final convenience is the ability to crank up the game’s speed by 2x. The game is incredibly slow normally, so I essentially kept this on for the entire game. However, this feature speeds up EVERYTHING, including music, sound effects, and input registers. To make the game more tolerable, you’ll want to mute your TV and be less quick on the draw with moving units around. For a company that hates emulation and game preservation as much as Nintendo, it’s incredibly hypocritical to advertise emulator standards as “features,” especially with how lackluster their implementation is. (Only one bookmark? Seriously?) If Nintendo wasn’t destroying gaming history, this would be a perfectly fine release, but given that and the fact this game will only be available until March 31st, they’re going to have to do a lot more if this is their alternative to game preservation.

While Fire Emblem: Shadow Dragon and the Blade of Light is a fantastic game that somehow holds up after 30 years, it’s presented in a barebones package that feels too little too late as an anniversary release. If Nintendo is hell-bent on destroying their own history, they’ll have to do a lot more than adding savestates and speed modifiers.

David is the kind of person to wear his heart on his sleeve. He can find positives in anything, like this is a person who loved Star Fox Zero to death. You’ll see him playing all kinds of games: AAAs, Indies, game jam games, games of all genres, and writing about them! Here. On this website. When not writing or playing games, you can find David making music, games, or enjoying a good book. David’s favorite games include NieR: Automata, Mother 3, and Gravity Rush.
Related Articles: Fire Emblem: Shadow Dragon & the Blade of Light
Share
Tweet
Share
Submit