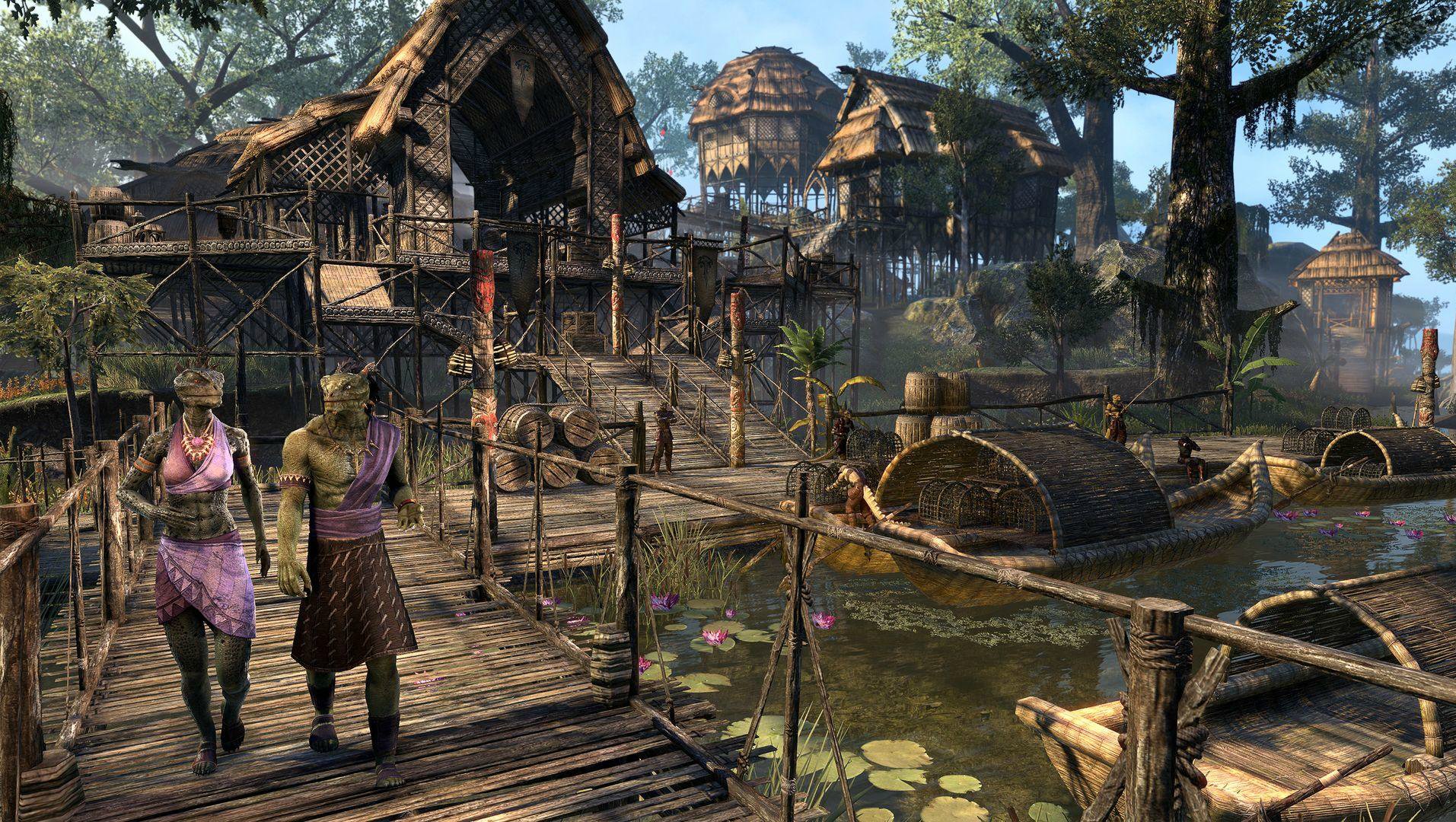 Elder Scrolls Online is aging with grace. Like a fine wine or female sexuality, the game’s peak will be found later in life. For now the game continues to slowly build to crescendo and each addition brings different levels of improvement. Murkmire is the latest, and where it lacks in any massive overhaul, it delivers in bringing to life a region of the world otherwise largely underserved so far.

Murkmire features a small but lively portion of Black Marsh in the southeastern-most portion of the map. Home to the Argonian race, these lands feature dense jungle, swampy marshlands and treacherous encounters obscuring the relics and secrets of the Argonians.

Unfortunately the area isn’t a very large one. The entire map can be traversed in about an hour, and while there are new locations, world boss encounters, and delves to explore, experienced players will blaze through them in about a day or so. The world’s lone strong challenge is in a new arena style dungeon.

Blackrose Prison is a 4 person dungeon, but unlike most, you don’t do any actual spelunking. This arena battle pits your group against three strong bosses, with various powers to rip your flesh from your bones. These battles are complex and require smart tactics to clear. The addition of another arena, something lacking in ESO, is very welcome.

The battle is broken up into 4 parts. In the first three you face champions, who are accompanied in the battlefield by supercharged versions of the beasts outside. Each boss has special abilities that take smart planning to survive. After defeating the three bosses, the fourth wave is all three, weakened, combining their strengths to chop you down. It is a difficult experience even on the standard level, and the veteran version of the dungeon is near impossible without maxed out players taking it on.

The rest of this update feels more utilitarian than ancillary. The benefits of simply having the access to various character boosting features such as bonus skill points means not having Murkmire puts you at a disadvantage. It isn’t quite “pay to win” level but it is unfortunate that such an important update also comes with little in the way of expanding the game beyond the map.

The area is filled with some of the more annoying enemies as well, mostly large bugs, swarms, and reptiles. Running around the map isn’t nearly as fun as it should be. With there already being a similarly sized Black Marsh zone on the map, this expansion feels largely copied and pasted and brings little new to the game, much like the Summerset Isles expansion.

The most useful addition to the game comes in the form of new daily missions, which are mana for still leveling power players. They are the ESO standard delve clearing and world boss conquering variety, but they are very much appreciated by players such as myself.

Despite the negatives I still enjoy the additions that Murkmire has to offer, and I am excited for what the future will bring in the region. Closing the gap between the south and the north regions currently available will make for a very diverse and rich world to explore and this taste test makes me very anxious for more.

Elder Scrolls Online: Murkmire is a scant but slick addition to the world of Tamriel, and begs to be unleashed even further in the future. For now, the swamps and bogs come alive and while there are some less than desirable traits to be found, the overall product is solid and a must have for dedicated ESO players.

Patrick Rost has been with Gaming Trend since 2013. At first focused on sports coverage, Patrick has gone on to cover a wide range of games and other products for the website. Outside of Gaming Trend, Patrick writes and records music, grinds perpetually in Elder Scrolls Online (PS4), and lives day to day with his two dogs, Bob and Stella.
Related Articles: Elder Scrolls Online: Murkmire
Share
Tweet
Share
Submit