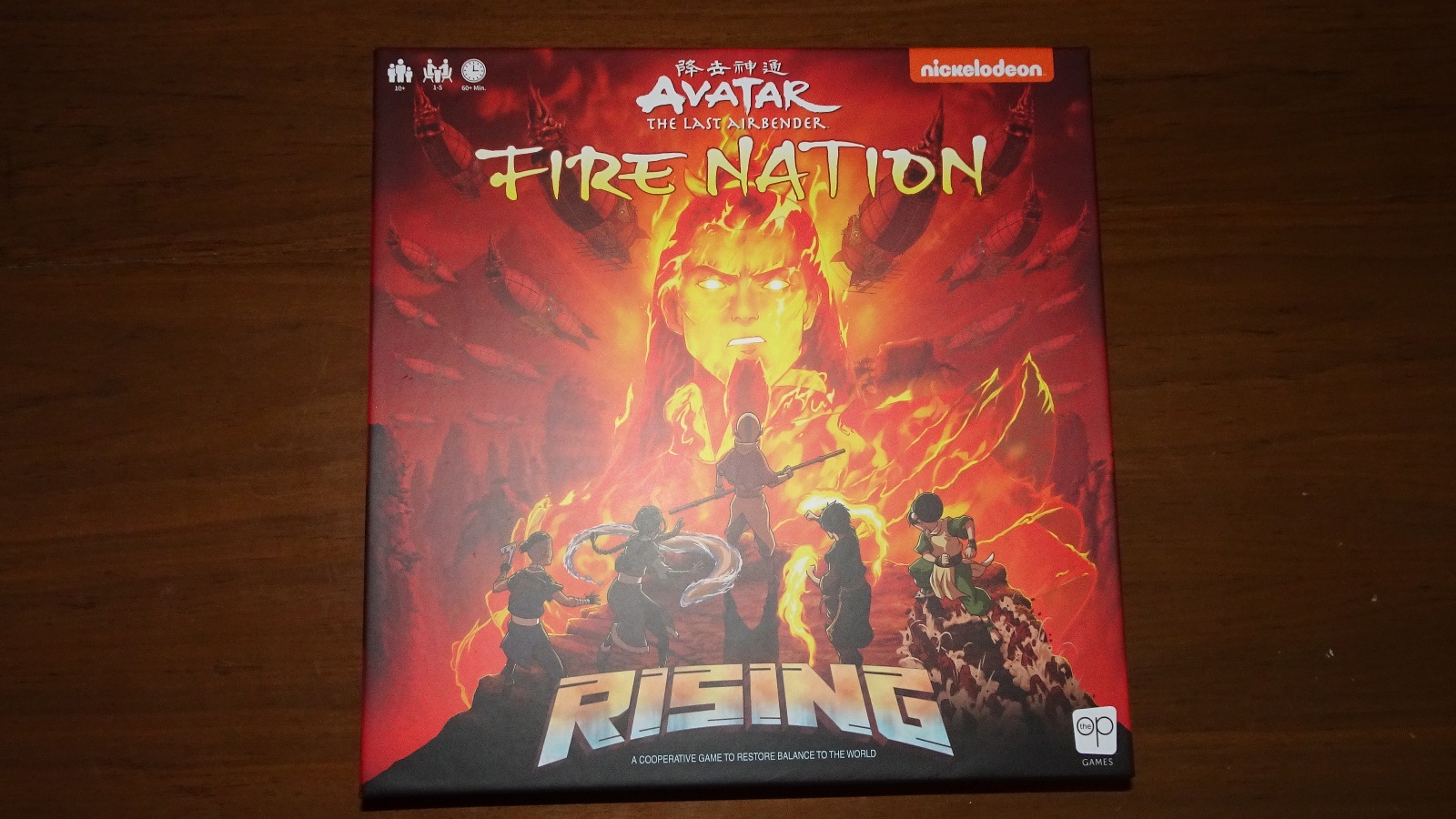 Avatar The Last Airbender: Fire Nation Rising is a cooperative game where players build up a team of characters while they try to fight villains and have a showdown to take down the entire Fire Nation in a selection of final battles. This is done by taking turns rolling dice, assigning them, and withstanding enemy attacks. While fans of the show will enjoy the game far more, the core game itself is still solid enough that gamers will enjoy it even if they don’t understand the references.

Avatar the Last Airbender, for those that have not seen the show, was a popular show on Nickelodeon that was well received even by adults for some very heavy themes and plot points largely unseen in cartoons. Gamers might be right to be wary of games based on popular IPs, this one is remarkably well done. While fans of the show will get far more from the experience, the systems the game uses are interesting enough that others will still enjoy the experience. 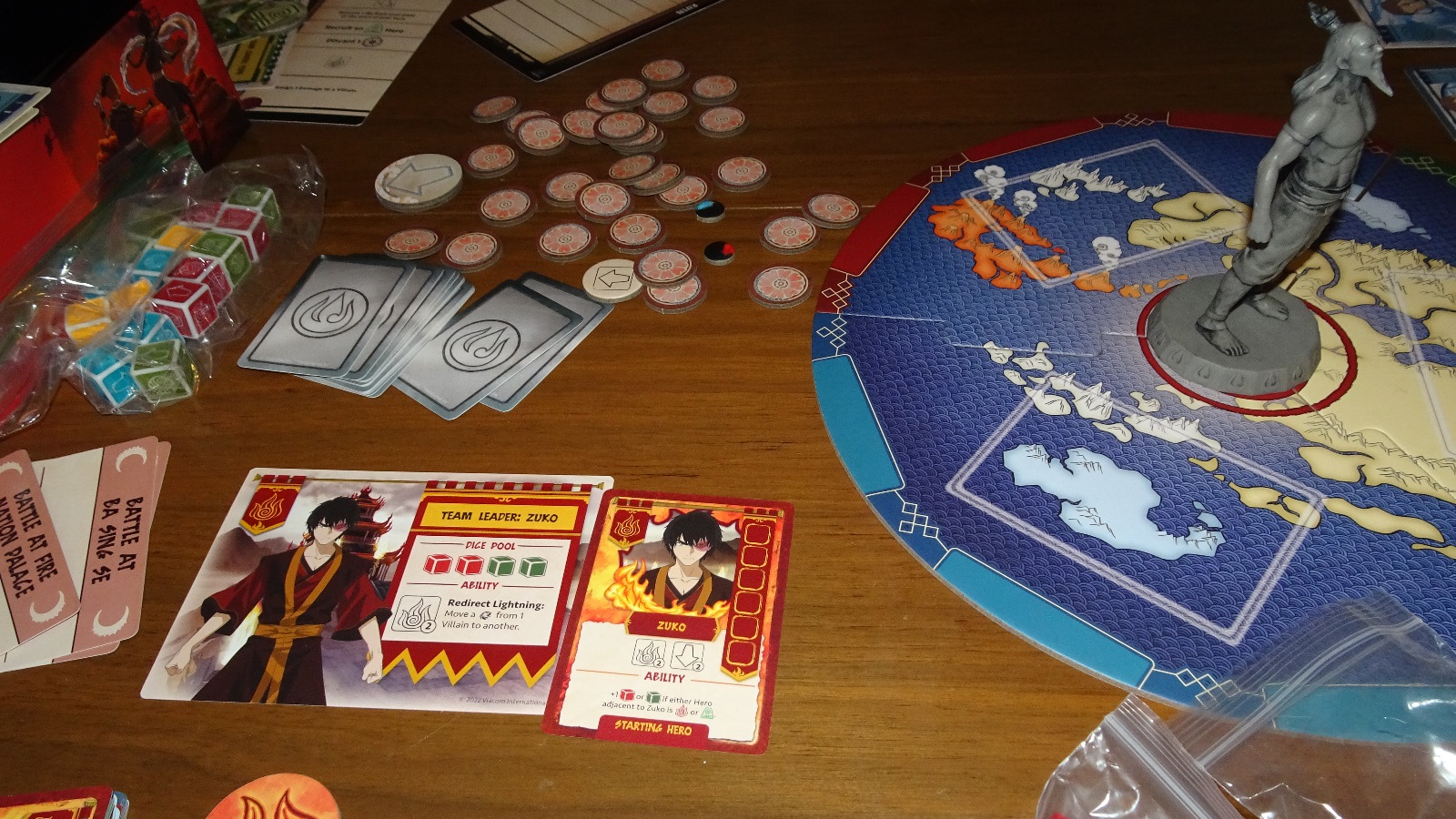 The game is set up with zones representing three different nations – Fire, Earth and Water – and three random cards in each zone. These cards are either potential teammates or villains. At the start of a turn, players will pick one of these zones to go to, then a random card is drawn to see where the Fire Nation attacks for the turn. Everyone in that zone takes damage, then players get their turn to go.

Players’ turns are easy to describe, but pretty rewarding. Players first grab different colors of dice based on their team combination – representing the four elements – typically this will be 4 to 6 dice. They roll and from here assign a die to one of the three aforementioned cards in a specific nation’s zone. The point is to either recruit new heroes to the team, or to fight the enemies. There are four different ‘elements’ of dice, which all are weighted heavy to their element. So a fire dice will have more fire symbols, but still have one of each of the others. As an example, an enemy might need 2 fires and 1 avatar symbol to do damage, so players will roll and assign dice as appropriate. Only one dice needs to be put down a turn, so players can reroll hoping for something better.

It is a great mix of push your luck and strategy trying to decide how best to use the dice each turn. There is a minor timer of sorts that rushes the game along before the final battle section. Overall, the first half of the game is a race to accomplish goals certain goals against the timer of the Fire Nation, and depending on what side reaches this goal first impacts the second half. The biggest goal of the Fire Nation is when enough heroes have been killed the game is over. 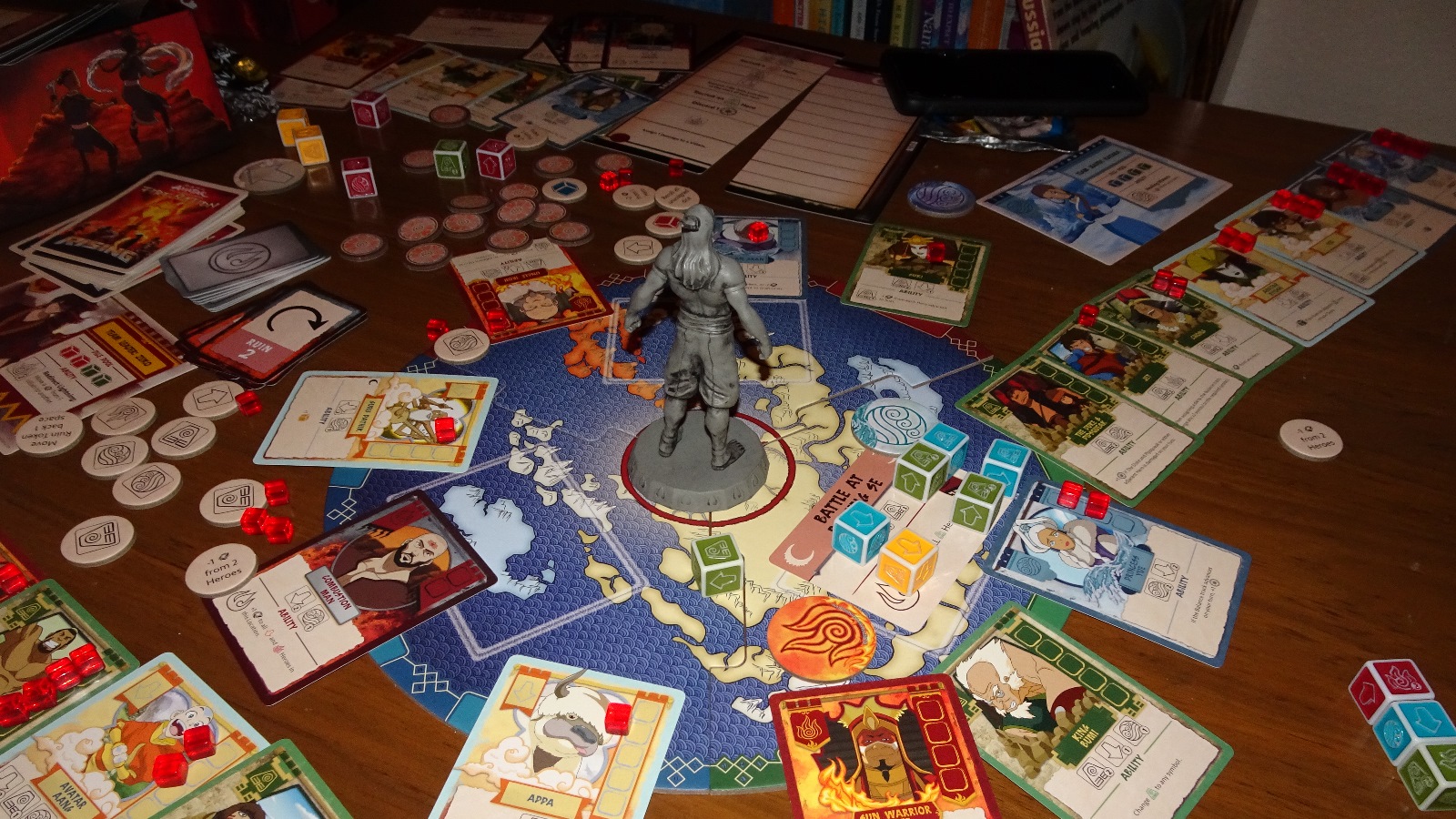 I appreciated how this game eschews the modern game design theory concerned with keeping players in a narrow experience: don’t let them get to strong and don’t let them get too weak. In Avatar, if the Fire Nation reaches their goal first (meaning the players haven’t been doing well) not only do the hits keep coming, the game kicks you when you are down, killing off more members of your team. Some players may rage and complain, but it adds to the intensity and is in keeping with the television show.

The final battles play mostly the same, except that players must plow through all the villains in an area to then to then assign damage to a final special card One great thing is that typically the players’ teams are very heavily wounded at this point, and just barely hanging on about who to keep alive, depending on team composition players may or may not have much control over this.

Despite being based on a ‘kids’ show’ the game is surprisingly hard and there is a lot going on. Fundamentally, the main core loop is easy, but there is so much other stuff happening that at least one person needs to be paying attention, assigning damage, activating enemy cards etc. Further, the game is going to stomp people, and generally will need to be scaled down for younger players. The difficulty is going to be near medium to hard where it’s not insurmountable, but don’t be surprised when suddenly everyone is dead and the game is over. 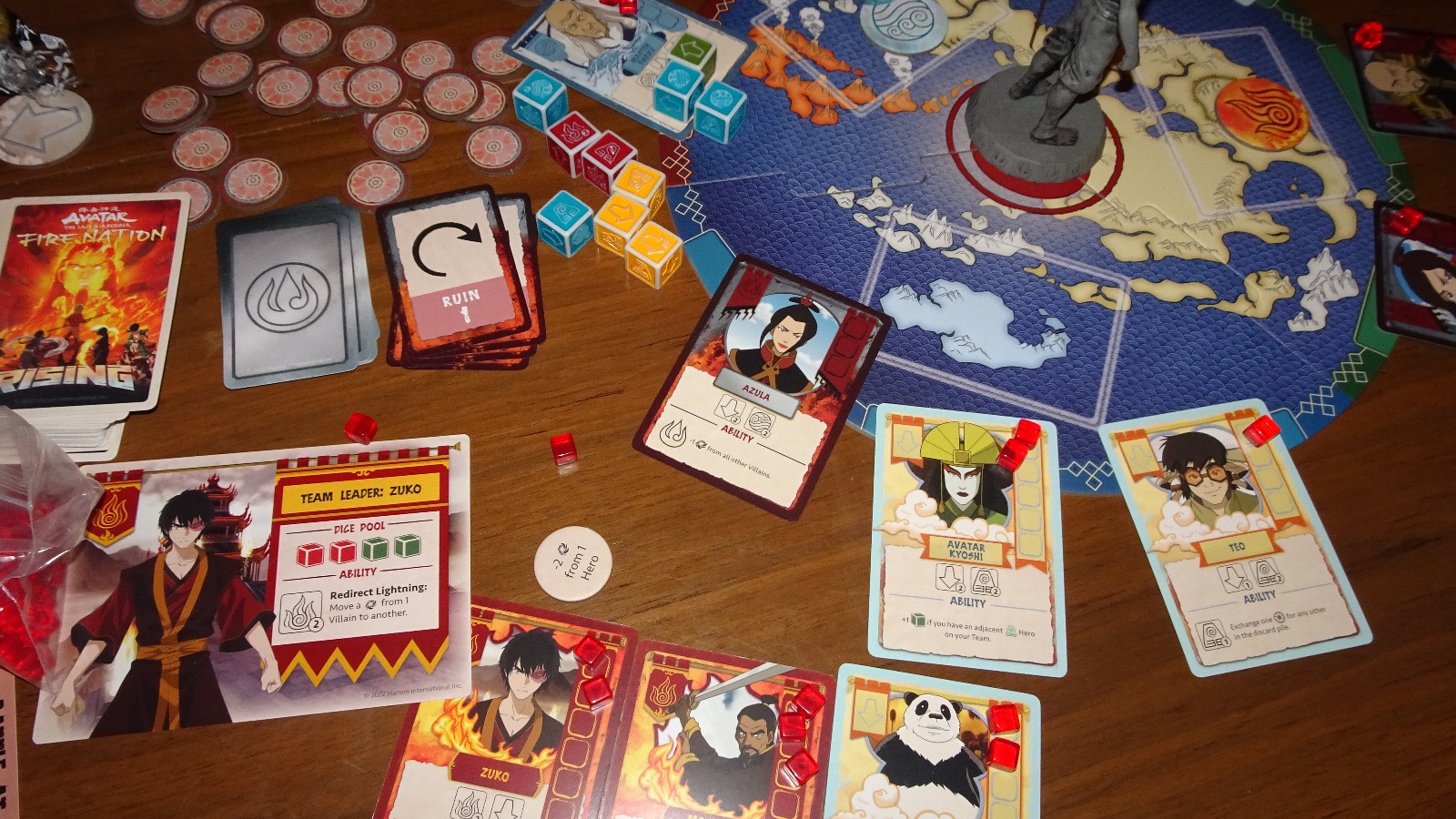 A few problems presented themselves during play., First, the rule book glazes over some pretty key points. Some key stuff gets a single sentence mention deep in a paragraph, things such as how tokens are gained or used which have heavy impacts on the overall game. Second, many of the characters have fairly complicated powers and it gets complicated how or when they can be used, or how they interact. Again, this is from experienced adults playing, younger players are going to be blown away by some of this.

Overall though, the game was a surprise hit. There is a very good tension that alternates between seemingly easy to suddenly doing everything you can to just make it one more turn. Many times players were ready to just call the game, but kept going to achieve some really fun victories and snatching victory from the jaws of defeat. The dice recruiting and utilization mechanism is very interesting and I would like to see more games use it. Players left with a pretty positive experience from the final battles and how close they would constantly come to losing.

There are a few nitpicks that drag down an otherwise very solid experience. There is a lot of tension and the core game is easy enough to explain to bring people up to playable speed. The late game is pretty intense with a constant feeling of losing and pressure. While enjoyment for people who haven’t seen the show might not be as high, the main loop of building up a bigger squad and dice pool is very entertaining while trying to avoid the constant fear of getting wiped out.