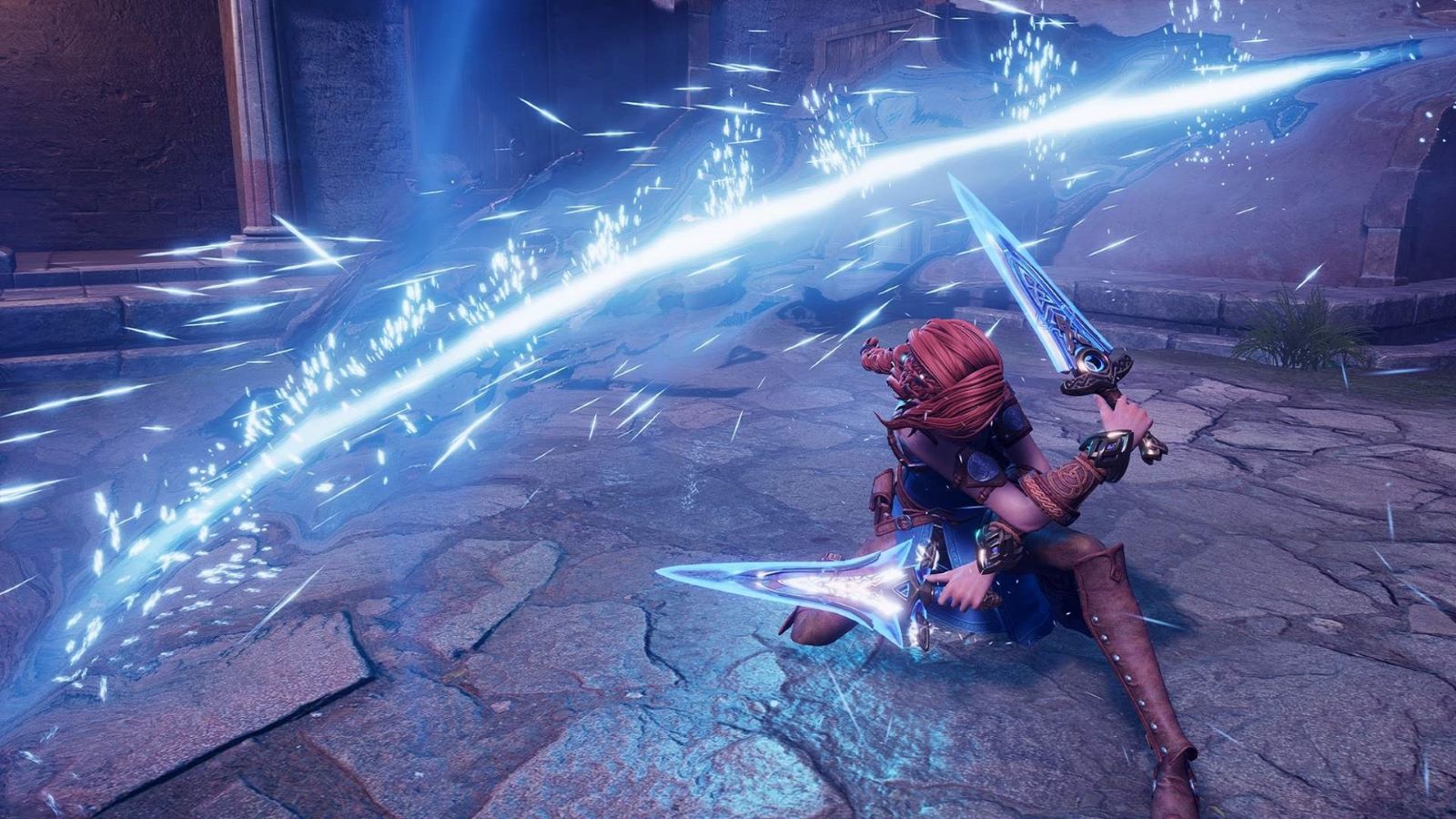 When I watched the official trailer a little over a year ago, my interest peaked at this title which presented itself as a fun, combative action-adventure game with Greek and Roman mythology inspired themes and visuals. Sometime later the gameplay overview was released, and more details of the combat system were revealed. Showcasing elemental weaknesses and the ability to wield different weapon types had me hoping for a great build crafting adventure similar to the Souls’ games.

After finishing the game, it is heavily noticeable that Asterigos has a big issue on committing to what kind of game it wants to be. Taking inspiration and admiration of Greek and Roman mythology, Asterigos has tons of potential yet doesn’t realize it. What holds this game back is uniquely one of this game’s best qualities. It is stuck in the middle of being a mythology themed adventure filled with mystery and intrigue, and a Souls-like game filled with an emphasis on exploration and combat. With the intro out of the way, let’s talk about what works and doesn’t with Asterigos: Curse of the Stars.

In Asterigos, you play as a young and optimistic warrior of the Northwind Legion named Hilda. You meet her as she is embarking on a mission to locate her father and his troops as they haven’t reported back to headquarters in three and a half months. Immediately, you get the sense of a young yet determined drive within her. Due to discovering some left behind clues, Hilda learns that her father is somewhere in Aphes. 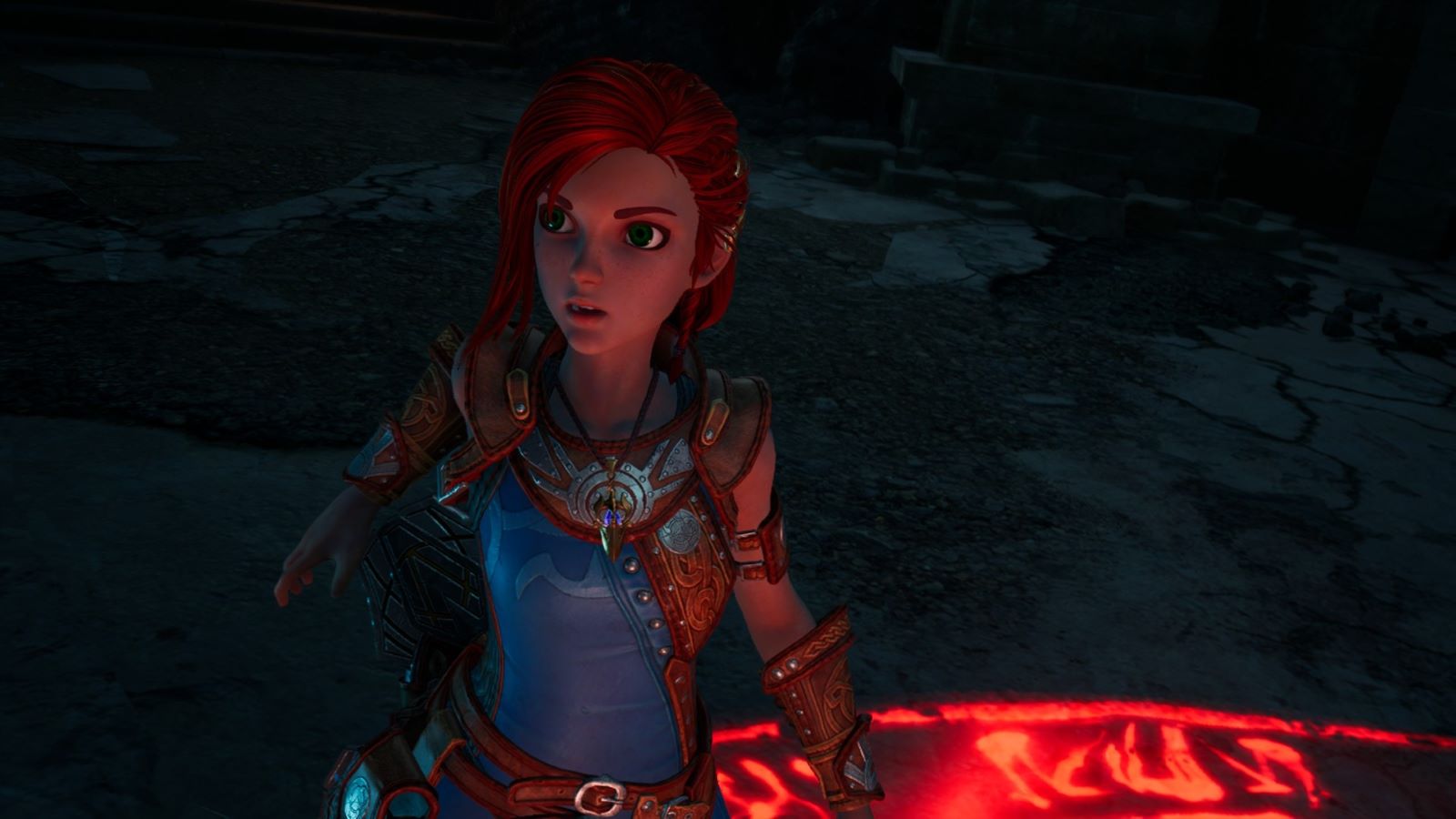 Aphes is a city that has been cursed with something that I’m not going to spoil here. The heart of the story is the mystery and allure of the curse that happened upon this city, and Hilda’s quest to overcome it. The characters, however, are something that definitely needed more time in the oven. Most of them were uninteresting and bland when it came to both personality and design. With this being stylized after Greek and Roman mythology, I think it would have been much better to implement the gods from those mythologies. Their interactions and personality conflicts would have worked much better. A big reason most games use the gods as characters and add their own twist is because it works.

Gameplay wise, Asterigos’s combat feels and plays fantastic. Nonetheless, it feels like it is trying to go two different paths, yet not fully committing to either. The game tries to cater to the RPG path of heavy narrative and skill trees, and the “not going to hold your hand” attitude, or self-discovery of the story, many Souls-like games have. That isn’t to say that’s a bad thing as you can cater to two different audiences but weakens the game in doing so. It would have been a better experience to fully commit to one genre, instead of what feels like putting half of their effort into two genres.

The different weapons in combat felt balanced and exclusive. A phenomenal feature is you are able to equip two different weapons at the same time, allowing for unique attack combinations and techniques. I used the daggers and spear combination almost the entire playthrough as, in my opinion, they were the most fun and effective. I love mobility in games, and they allow for great engagement both in attack and defense.

One design I would have loved to see would be more rewarding in combat for combining attacks and builds. Yes, there is a skill tree, where you level up to earn points to unlock new skills but build crafting and tactical fighting took a back seat. The skill tree seems to be a way to time-gate skills that don’t need to be. In most RPG’s the better and more valuable skills are the last to be unlocked for obvious reasons. Here, all of the skills felt the same in terms of lethality, so it’s not very enticing to try different builds with different weapons and abilities when all feel and have the same potency. Having advertised the ability to imbue weapons with different elements to take advantage of enemy weakness, not only did I not notice any difference in damage given, but there also wasn’t a clear tutorial or explanation on how the whole system works. 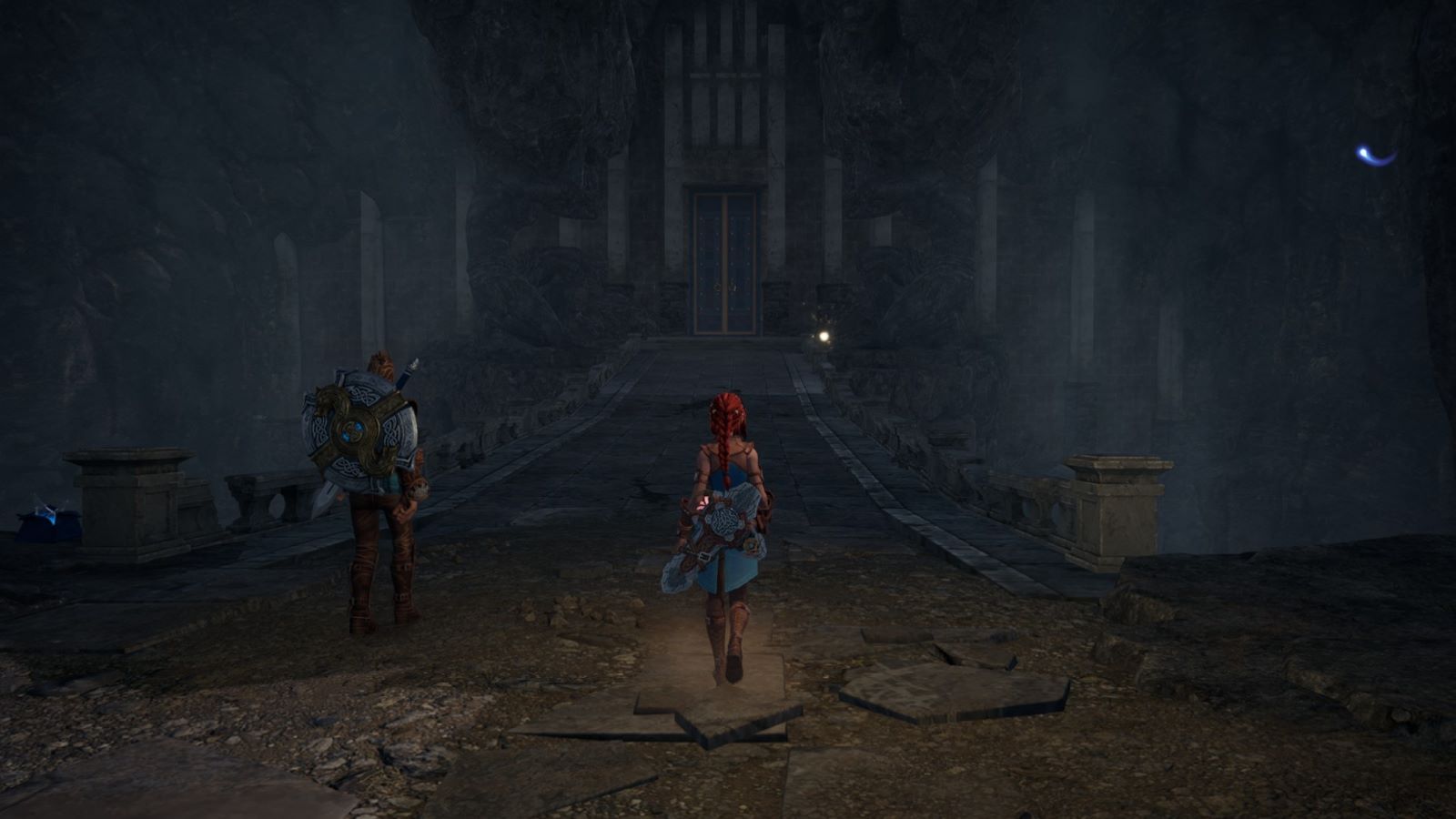 One of the main draws of the soul’s genre is self-exploration of the world and unique boss fights. Asterigos dips its toe into each of those but keeps it to a casual level. Player exploration and discovery are one of the core designs, however the city was both not linear enough and too big to not include a mini or area map. This is my biggest frustration with the game, along with having to use the stamina meter to run when out of combat. It’s completely unnecessary when you base one of your core designs around exploring every corner of the world to find items and quests.

One of the biggest highlights of Asterigos are the boss fights. Each boss fight felt different and scaled really well in size compared to Hilda. Some changed attacks and styles after reaching certain damage thresholds, which is on par with the genre. Unfortunately, aside from the final boss, the fights throughout the story didn’t have the difficulty I’ve come to expect. Most games in the soul’s genre use bosses as a big difficulty spike to make them feel truly like bosses and to test players ability on learning attack patterns. If you’re going to have item use and combat be based on a genre known for difficulty spikes in boss fights, I think a game should fully commit. All the same, I truly believe Asterigos’ best feature is what it advertises so much – fun and customizable combat.

On to the last topic, let’s talk about some foundational aspects. One of the first things I check in games are accessibility features, along with visual and audio customizations. First up is accessibility, and there were only four different button configurations to choose from. In a game where a core component is dodging and the timing of attacks, I would have liked more options along with these base configurations. I think a custom toggle, where one could map any action to any button would have been a nice option to have available. 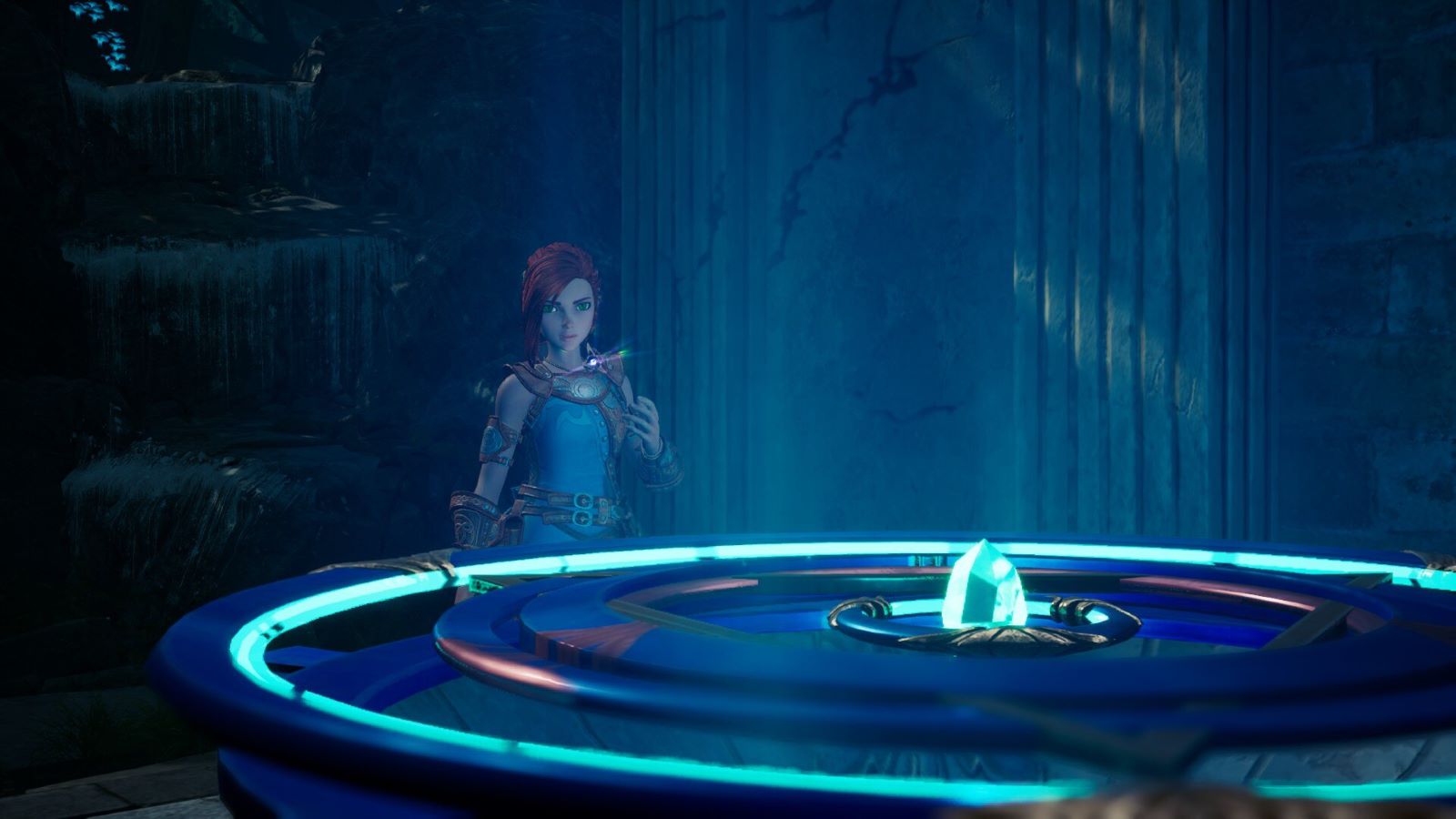 Moving on to visuals, I was disappointed in not only the visual options available, but also throughout the game as well. In the menu options, there was only a gamma adjustment and subtitle font size changer. I reviewed Asterigos on a PS5, and was surprised not to see a performance/resolution slider on as it seems to be the standard for most games that are released on last gen and current gen. The game would benefit from that slider in that it perfectly could coincide with my opinion of it catering to two genres. A low frame rate and high resolution would have been great for having the beautifully detailed worlds and characters RPGs are known for. While vice versa, in almost all Souls games, a high frame rate is essential for dodging and blocking attacks.

The one word I would use to describe the graphics is inconsistent. Many of the cutscenes were of good quality rich with detail and lore, however in-game dialogue isn’t meeting that same high watermark; most of the time characters beside Hilda would not have mouth movements when speaking. There are also recurring instances, like trees and houses looking normal but bushes and items in the streets looking like they lost all texture. Enemy textures and animation are also low quality in a lot of areas, with frame rates and details dropping to poor levels. Enemy density is extremely low, with you only encountering two to three different enemy types in each large section of the map, and some enemies would look and move like they belonged in the PS2 era. Luckily, once you engage in combat the visuals settle in, and you can focus on fighting and such.

Sadly, the world of Asterigos feels barren. In fact, you rarely see any citizens of Aphes at all besides the one area of the map. The only reason you see these nobles and can interact with them is because of the questline involved. There are houses that allow you to knock on the door and get random audio dialogue, but there wasn’t a glaring need to walk around to talk to everyone. It doesn’t feel like a cursed city as much as a ghost town, with the only people there being you and enemy combatants. Audio wise, I have no issues or anything to note as it had the standard customization toggles and sound. In the game, the voice acting was a great treat. I give huge props to the voice actor of Hilda; she had a lot on her plate as the main character and she killed it.

Like I said in the introduction, Asterigos feels like a game caught between trying to be an adventure game based on mythology and a soul lite with faster combat and hidden lore. In doing so, it was good at both but not great in either. Asterios greatest strengths are fun combat, excellent voice acting, and detailed lore found around the city. Where it can improve is cleaning up visually a lot, commiting to a core concept, and strengthening its story and characters to make them more memorable. I think this is a decent title for someone who wants a Souls-like game without the difficulty, or someone who likes adventure games, but not the 100-hour odysseys we have now.

Asterigos: Curse of the Stars

Asterigos: Curse of the Stars is a game composed of two different genres and not fully committing to either. Doing so makes it not reach the potential I think the game could have had by sticking to simply one. Still, with fun combat and an explorative world, it is a solid experience. One that many gamers will be satisfied with but forget after the holiday season.

Noah is the resident weeb who spends most of his time gaming and watching anime. His goal is to expand his skills while meeting new people. You have probably seen him feeding the other team kills in Overwatch Comp or speculating Star Wars and One Piece. Follow him on twitter @RigsbyNoah.
Related Articles: Asterigos: Curse of the Stars
Share
Tweet
Share
Submit