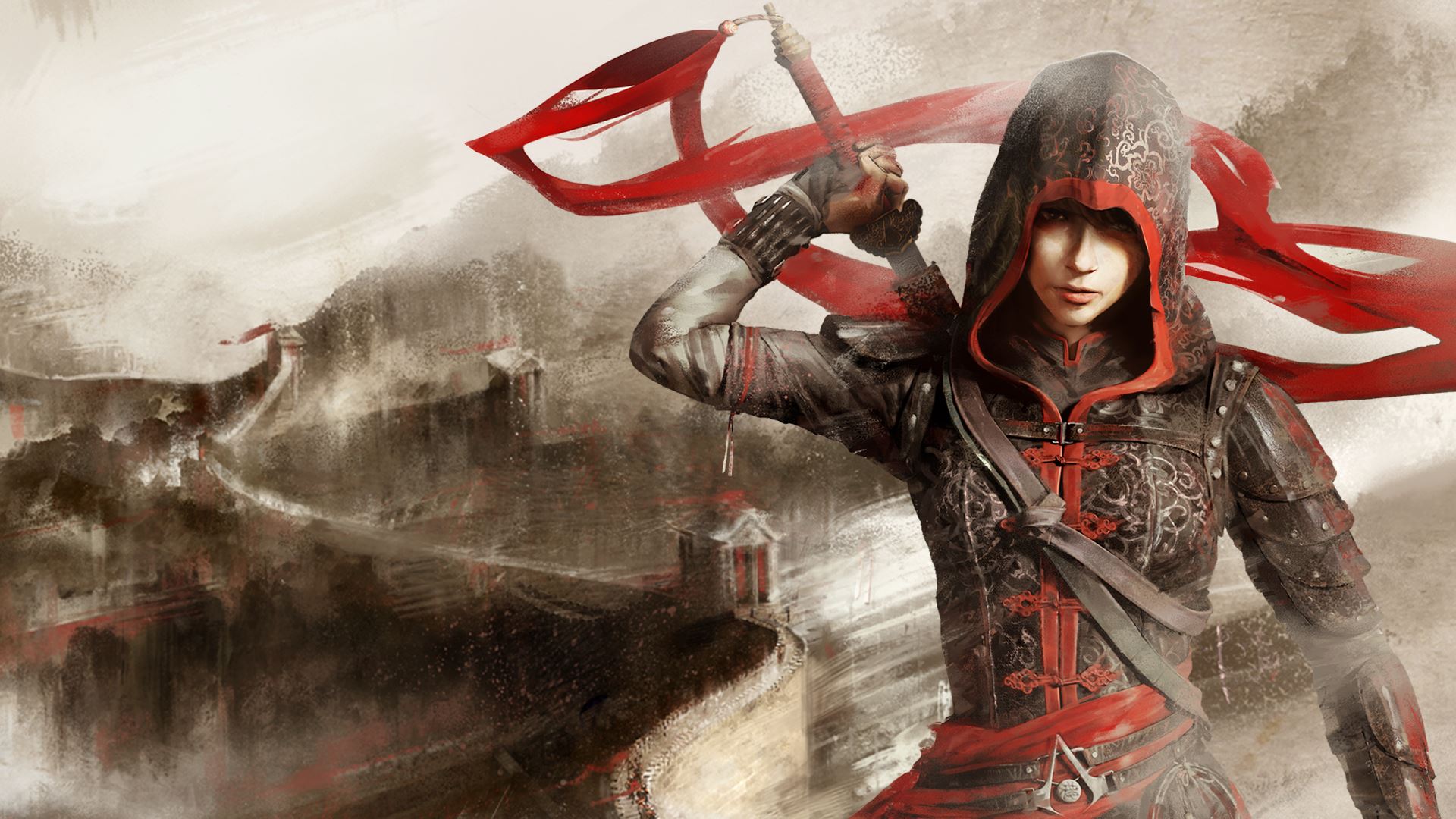 There are a few franchises that we see annually. Sports titles, as well as adventure games and shooters like Assassin’s Creed, Call of Duty, and others are visited upon us every year, but the folks at Ubisoft are dipping their toe into the water a little more frequently these days. Assassin’s Creed Rogue released on the same day as Assassin’s Creed Unity. Now a few months later we are looking at the first in a trilogy of new Assassin’s Creed titles…but these are a little bit different, and in a world where game companies are taking fewer chances with their properties, different is good.

Ubisoft engaged with Climax Studios to bring Assassin’s Creed Chronicles to life. Climax brought us Silent Hill: Origins, Rocket Knight, Bloodforge, Diablo on the PlayStation, Viva Piñata on the PC, and Sudeki in their recent past, mostly focused on platform ports rather than larger IPs. The game will be three assassins from three countries, and our first outing is the highly-anticipated China setting.

The story begins in China in the year 1526. A corrupt group of eunuchs known as The Tigers have destroyed the Chinese Brotherhood of Assassins. These Tigers are actually Templars with the usual bend on controlling the government from the shadows. Shao Jun, a survivor of the assault on the Chinese Assassins (and our protagonist) returns to her home of Maijishan Grotto with her master Wan Yangming only to find that it has been turned into a prison by the Templar leader Gao Fang. To get close enough to destroy Fang, Shao allows herself to be captured whilst holding a Precursor artifact given to her by Ezio Auditore from Assassin’s Creed: Brotherhood. This will ensure that the Templars keep her alive long enough to find out more about the object, giving her an opportunity to strike. It is here that our side-scrolling adventure begins.

Assassin’s Creed Chronicles is, at its heart, a 2D platformer, but that doesn’t explain it properly. The game plays not unlike the original Broderbund Prince of Persia titles, or Klei Entertainment’s Mark of the Ninja, which I assure you is high praise indeed. Chronicles strikes very similar chords as Mark of the Ninja — guards with vision cones, utility weapons like shurikens, and traps as a staple of level design. In fact, almost every mechanic of Chronicles has been seen in other sidescrolling stealth titles. The only difference on the board is the board itself.

Chronicles has action existing in the foreground as well as the background. As this is an Assassin’s Creed title, there will be hidden Animus Shards. Popping between the foreground and background reveals new routes to targets, paths to hidden objectives, and to find collectible goodies. There are even a few opportunities to get a good run going between the foreground and background as you race to escape a raging fire. Occasionally the threads of the design peek through as objects that Shao could easily scale bar your way, but for the most part it works very well.

One of my favorite aspects of Chronicles is the visuals. The team at Climax utilized a style that looks like a watercolor painting in motion. Vibrant reds stand out against heavy grained paper brown colors. As flags blow in the wind, they cast off a bit of their red hue. The brushed look creates water stains on the dock walls. It’s all very beautiful, and it makes me excited to see the other two episodes of Chronicles unfold in the same fashion, but in their respective regions.

Combat is harrowing in ACC: China

Chronicles is a very pretty game, and in the end it is an entertaining distraction (especially for $9.99), but there some problems. For example, there are moments where instead of killing your target as they look out the window, sometimes Shao will simply push past them, climb out the window and inadvertently start a conflict. Worse, if you do kill that same guard, you can’t drop him out the window to dispose of his body. Since you can’t crouch underneath windchimes while holding a body, you are 100% guaranteed to make a racket as you shlep the body back to a bamboo curtain to hide it. When you are eventually spotted, the guards won’t really pursue you beyond a few seconds. If they can still see you, but you’ve climbed down a ladder, they’ll just stand there yelling as they throw shuriken or shoot crossbow bolts at you. You’ll find Animus shards in boxes, and you’ll be able to hide bodies in boxes, but you inexplicably can’t hide bodies in the Animus shard boxes. Moments like this break the magic and spoil the mood.

Like all Assassin’s Creed titles, the tutorials never seem to end in Chronicles, so near the end game you’ll earn new abilities. The Helix Dash (allows you to vanish like a ninja and bounce between hiding spots) is powered by finding Helix pieces. You’ll also learn new attack moves like the sliding kill, and the ability to use a rope dart to stick to ceilings. Why these are doled out like prizes instead of providing these skills up front, I don’t know, but it does break the immersion that you are in fact an Assassin, not an apprentice doing on-the-job training.

The largest consistency in this game is the inconsistency of the controls. Not unlike other Assassin’s Creed titles, you’ll find yourself frustrated as you can easily make a jump, only to have Shao suddenly decide that, while the city is on fire and actively exploding behind you, now would be a great time to hang from ledges or refuse to release from walls. It’s the sort of thing that is usually ironed out and cleaned up in the last few months of testing, but too often you’ll find yourself dead and restarting at the thankfully-frequent checkpoints, not because of anything you’ve done, but because the controls have decided to become unresponsive.

Where Assassin’s Creed is known for its parkour and high-leaping kills, it’s also very well known for incredible amounts of voice repetition. In Chronicles this dubiously-proud tradition continues, only this time it’s in Mandarin Chinese. Over the course of a 5.5 hour run, you’ll likely have a firm grip on a handful of key phrases, whether you like it or not. Standing two feet from guards as they repeat “Keep your wits about you.“, “And you yours, you’re meant to be watching my back”, and “I’ll watch yours, just make sure you are watching mine” continuously really underscores this issue. It’s also very easy to spot the bosses in the game — other than Shao, they are the only ones speaking English.

It’s always somewhat tacky to compare products, but it’s warranted when so very much is borrowed. This game is a bit of a knockoff of the superior Mark of the Ninja. Mark has a better story, less frustrating mechanics, and guards that are slightly less lobotomized than these dolts. If you’ve beaten Mark and want another crack at a decent sidescroller, Chronicles China should fit that bill, but let’s hope they bring some new concepts to the table for the next two outings.

Ron Burke is the Editor in Chief for Gaming Trend. Currently living in Fort Worth, Texas, Ron is an old-school gamer who enjoys CRPGs, action/adventure, platformers, music games, and has recently gotten into tabletop gaming. Ron is also a fourth degree black belt, with a Master's rank in Matsumura Seito Shōrin-ryū, Moo Duk Kwan Tang Soo Do, Universal Tang Soo Do Alliance, and International Tang Soo Do Federation. He also holds ranks in several other styles in his search to be a well-rounded fighter. Ron has been married to Gaming Trend Editor, Laura Burke, for 21 years. They have three dogs - Pazuzu (Irish Terrier), Atë, and Calliope (both Australian Kelpie/Pit Bull mixes).
Related Articles: Assassin's Creed Chronicles: China
Share
Tweet
Share
Submit