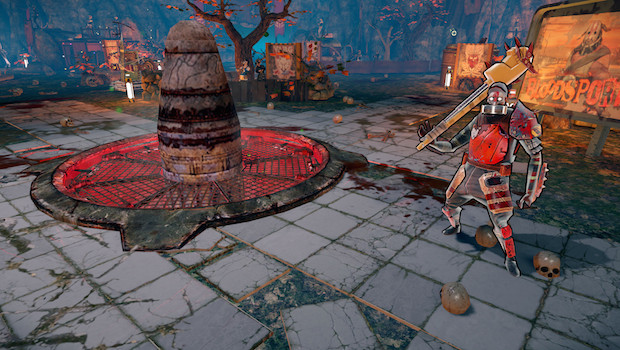 Crypt of the Necrodancer is a one-of-a-kind rhythm rogue-like that has players battling to the beat to find mystical treasures at the bottom of a randomly-generated dungeon.  With a seemingly infinite amount of effortless coolness and never-ending charm, Crypt of the Necrodancer delivers a satisfying challenge that keeps you asking for one more dance.

Roguelikes are difficult, that’s the nature of the genre, but Crypt of the Necrodancer offers a different type of hurdle for players to tackle.  You’ll have to move, attack, and use items to the beat of the game’s hopping soundtrack or you’ll lose your hard earned coin multiplier and get risk getting hit by a fiendish foe.

Battling enemies in time to music proves to be a challenge.  You’re forced to make decisions as you are compelled to move along with the music.  The added rhythm mechanic is far from a gimmick, as it allows Brace Yourself Games to make the game harder by making songs faster instead of the usual roguelike tropes of adding more enemies, or making their hits stronger and your hits weaker.

The crypt is broken up into four zones, each with three levels of increasing difficulty with a boss on the fourth.  Items collected in each zone are lost upon either death or after defeating the boss.  In between zones, players can shop using a one-time-only currency in the form of diamonds, found during each run in a lobby area for items that will appear randomly either in chests or shops located in the dungeon.  There aren’t many items, so you’ll run out of things to spend your diamonds on much more quickly than in a comparable title, like Rogue Legacy.  These shops are unlocked by finding and unlocking the cages that imprison rooms’ keepers as you progress through the zones.

Another function of the lobby is as a training ground for any of the game’s enemies.  Having trouble figuring out how to handle the parrying knights in zone 4?  Well, choose your weapon and fight them in the no judgment zone of the lobby to your hearts content.  Of course, that’s only after you’ve saved both the beastmaster and weaponmaster from the depths of the Crypt of the Necrodancer.

The randomness of roguelikes is ever present as you play.  Random item drops early on can make or break a run.  Powered up weapons that can strike foes from afar, torches of varying brightness that light surrounding bricks, stronger shovels, armor to bolster your defence, numerous spells, among many other implements can be found to boost your chances of survival.  Runs can feel totally different based on something as simple as whether you find a rapier, which increases damage when lunging at enemies two blocks away or a broadsword, which slices through the three blocks directly in front of your character with each swing.

A lot of the difficulty of Crypt of the Necrodancer comes from exactly how to approach each enemy.  Blobs, bats, knights, and goblins all have specific rules about the way that they move and strike, and finding out how you’re going to approach them without getting out of sync to the music is a large part of the fun as well as, at times, the frustration.

Gameplay also gets a twist when playing with different characters.  Each one has a feel that changes the game completely.  Levels that look like an absolute gift to some characters look more like a minefield when playing as the monk, who dies instantly upon touching any gold.  Meanwhile Melody, whose golden lute only allows her to attack enemies adjacent to her, changes combat completely, especially with the game’s powerful firebreathing dragons. The 10 characters total add a huge amount of variety to the already extremely varied game.

In addition to the game’s three different versions of the original soundtrack, Crypt of the Necrodancer allows you to use your own music using some open source beat sensing software.  The implementation is slick, even sensing complex tempo changes, but be warned — fast-paced songs can make even the game’s earliest levels nearly impossible to get through.  Songs with odd time signatures had some trouble translating into the game, although if you’re devoted, you can set up custom beats relatively easily.

Crypt of the Necrodancer is packed to the brim with features.  Local co-op is fun with friends, just be sure not to play it with anyone with whom you have too meaningful a relationship, as I’ve had some fierce arguments on who ended up getting who killed.  Controls include the keyboard, a gamepad, or even a dancepad, if you are feeling brave.  Seeded runs and daily challenges allow friends, as well as the world, to compete with each other on a non-random playing field.

Crypt of the Necrodancer

Crypt of the Necrodancer offers just about every feature imaginable, and each one is executed absolutely masterfully.  It’s wholly unique and provides a tension found nowhere else, offering up some rhythm to the roguelike genre just as it started to feel like it was getting stale.

Spencer Campbell has summited many mountains just to shout, “Video games are for nerds!!” After extensive scientific testing, he has concluded that they are. He plans on accepting his Nobel Prize as soon as the dorks in Sweden return his calls.
Related Articles: Crypt of the Necrodancer
Share
Tweet
Share
Submit