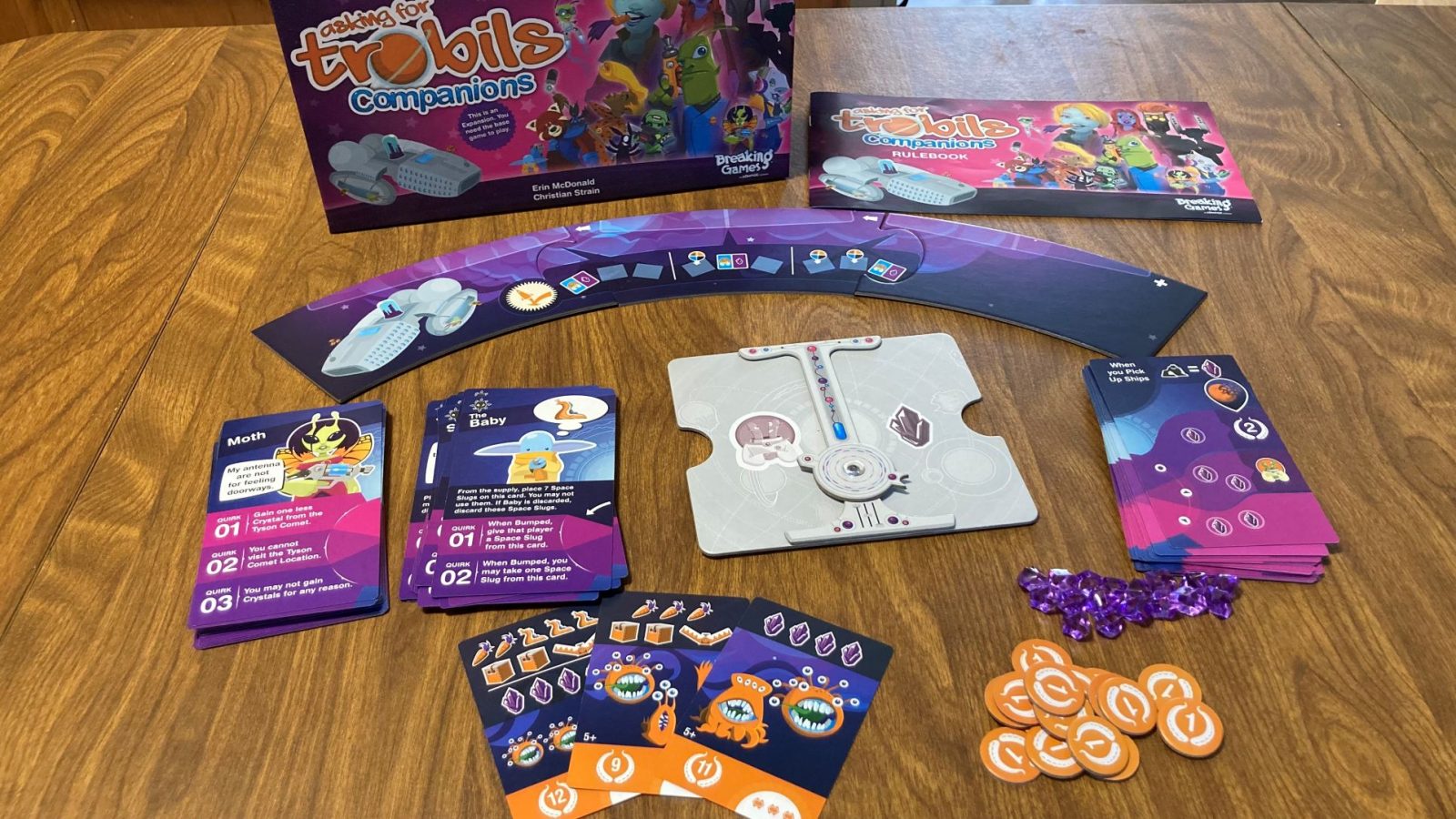 If you’ve played Asking for Trobils before, you’ve seen the nods and winks at iconic science fiction franchises in the design of the spaceships and the Riff Raff deck. With the Companions expansion, Breaking Games amped up the references while taking a small mechanic from the base game and making it the defining gameplay element.

In the base game’s Riff Raff deck, you could come across Hitchhiker cards that required you to go to a specific location to drop them off and receive a resource bonus. The Companions expansion takes that idea and makes it a core gameplay mechanic while adding a brand-new resource, shards. Additionally, this expansion adds a brand-new location to the board, the spaceship Friend Ship. At that location, there are three pairs of Companions and Shard cards. Players can take the left-most pairing without paying resources or add resources to cards to choose a companion pairing further to the right. 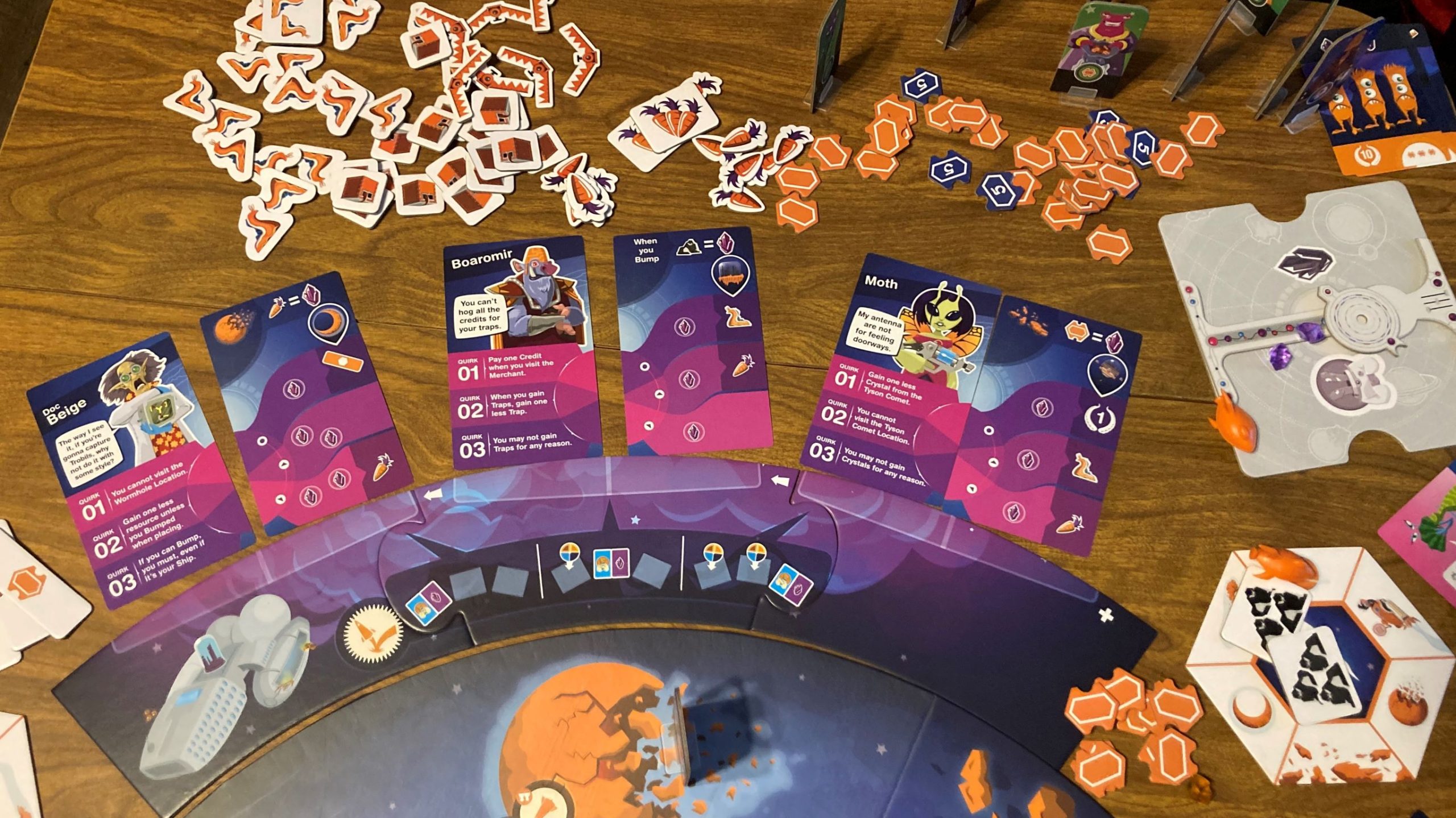 The Friend Ship location with paired companion and shard cards

These pairings are the only way to get shards. Shards are needed because the expansion replaces the original Trobil deck with brand-new Trobils that can use shards instead of the original resources. Some of the Trobils even exclusively require shards to catch them. You add shards to the shard card by fulfilling a specific objective on that card. As you do so, you fill in levels on the card. You can abandon the companion at any point to collect the shards accumulated on the card. However, if you complete higher levels on the card, you can drop the companion off at the card’s specified location to gather bonus resources as well.

The catch is that as you progress along the shard card, the companion has “quirks” that make movement and gathering resources more difficult. It becomes a tug of war between accumulating shards and those bonus resources versus the detrimental effects of the “quirks.” For example, Marvin McBee affects how you gain ore resources. At the first level, you cannot gain ore when you visit the Nye Asteroid Belt. Once you complete the first level on the paired shard card, it moves to the second “quirk” which is gaining one less ore each time you gather ore. His final level states “You may not gain Ore for any reason.” You need to manage those kinds of restrictions in your attempts to gain as many shards and bonuses as possible.

When you take one of the pairings from the Friend Ship, it goes into a holder with a spinning dial in the middle. The dial tracks what level you are working towards completing on the shard card while also pointing to the companion’s “quirk” level.

The dial is one of the few problems I have with this expansion. The spinning part of the dial is held to the holder with a clear plastic peg system. However, there are no instructions on how to put this dial and holder together. It took us some trial and error before we discovered the correct way to do this, otherwise, the dial will simply fall off the holder if you aren’t moving it delicately. Pushing the bottom peg through the holder can also slightly deform the cardboard but not enough to really affect how the dial spins.

Each shard card has its own rules for how you can accumulate shards. This may mean either a required action such as visiting a location or bumping another player’s ship, a resource cost, or both. The combination of requirements on the shard card with the quirks for a companion can lead to some interesting strategic gymnastics. Don’t tell me the odds, but there is a possibility of pairing a companion and a shard card where you cannot fully complete the card. Completing the shard card and dropping the companion off at its desired location earns bonus resources for the completed levels on the shard card. 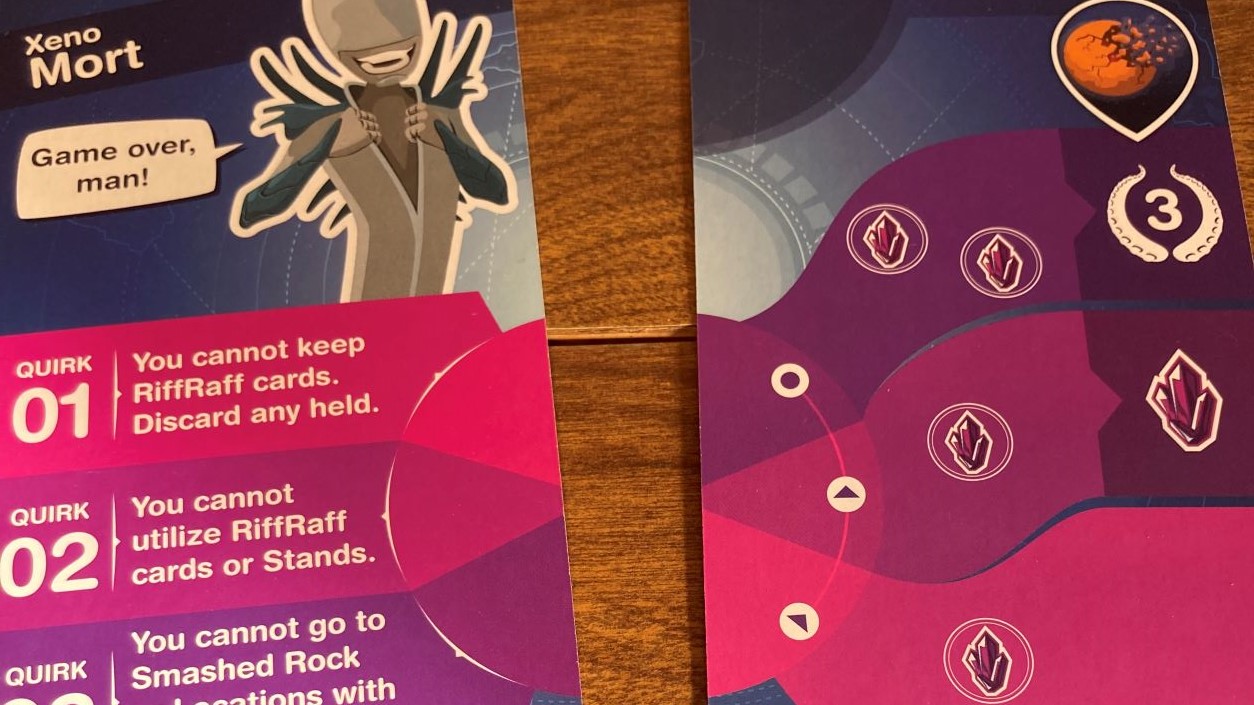 Once you and your one to six favorite friends feel comfortable with these new companions, you can really engage the Infinite Improbability Drive by adding the Chaos Companions to the deck. There are 19 Chaos Companions that can be played with instead of or in addition to the base companions. These Chaos Companions have fewer quirks with two apiece instead of three, but that doesn’t mean they’re any less chaotic. Their quirks can have a big effect on the whole table rather than just the player who has claimed the companion. For example, Zoytiri’s first quirk involves giving two ore to those players whose ships you bump, but her second quirk is when you are bumped, you give two of Zoytiri’s ore to that player and take one of their resources.

When you play Asking For Trobils, you’re used to the orange-dominant color palette. The Companions expansion is heavily purple from the background of the cards to the shards themselves. It adds a different color dimension, one that’s a great companion, ahem, to the base game. The character art is similar in style to the Riff Raff deck, continuing with the fun cartoon art style while diving deeper into the science fiction nods and puns. 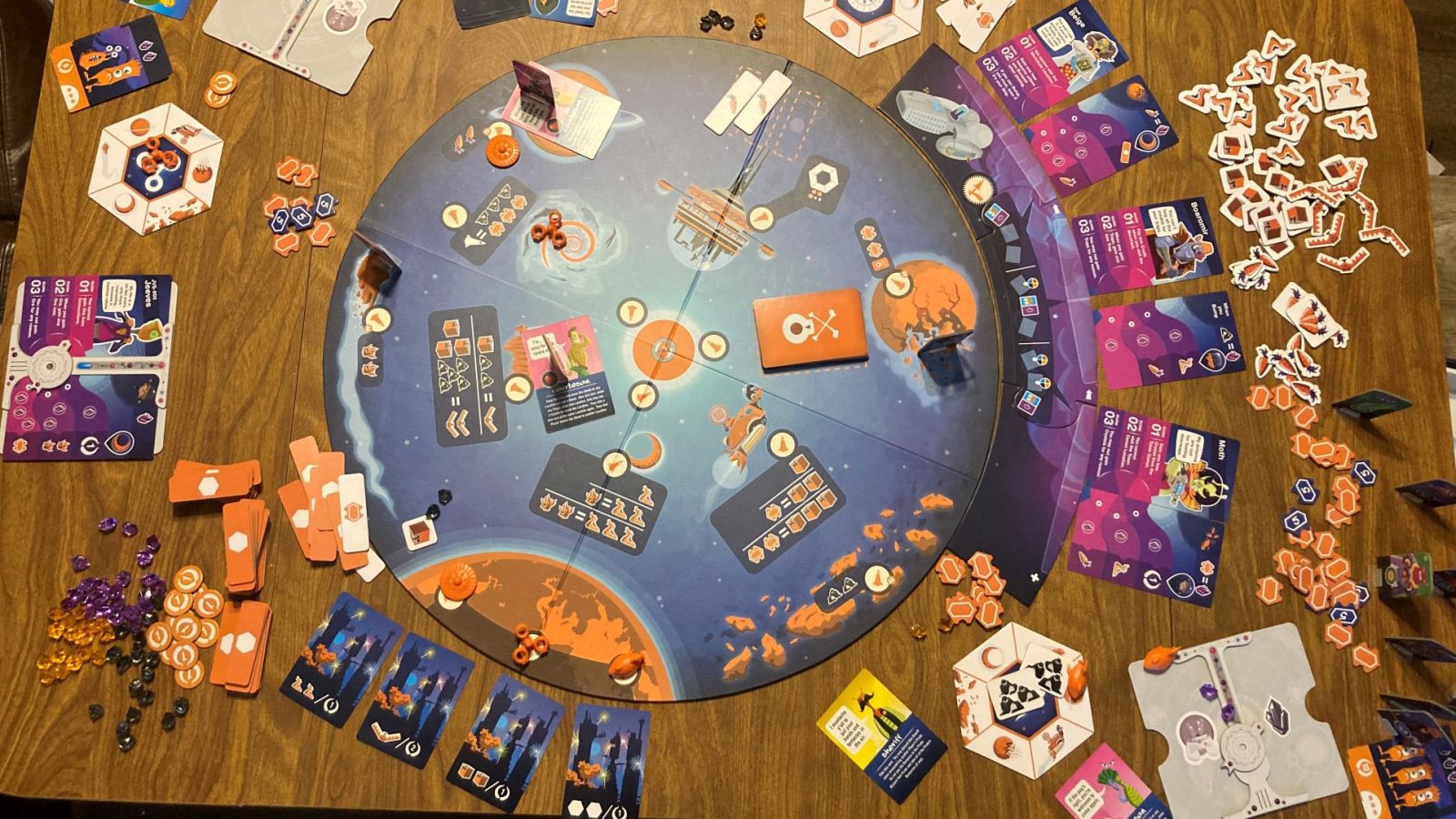 If you’ve enjoyed playing Asking For Trobils, the Companions expansion is a great way to add new ways to play while still maintaining the same fun experience. Even with some minor quirks with the dial and the table creep, it is absolutely a must-have expansion if you enjoy Asking For Trobils.

Jeremy is a freelance writer covering multiple subjects from board games to sports to barbecue. He lives outside of Charlotte, North Carolina with his wife and their three kids. They love to play boards game together, ranging from Qwixx and Azul and Splendor to Lord of the Rings: Journeys in Middle Earth.
Related Articles: Asking For Trobils: Companions, Tabletop
Share
Tweet
Share
Submit