A harbinger is typically a sign of things to come, usually for the worst. For example, the four horsemen of the apocalypse are said to signal the end of the world. Similarly, in another game I reviewed called Omensight, you play as the harbinger, a being who only appears to signify the apocalypse. In the latter example, you actively attempt to figure out the cause and prevent it. This time, in Golem Gates, you are a harbinger who has been summoned in order to eliminate the threat of a horde called the Unbound and their malevolent masters. With an interesting mix of real-time strategy and card combat, you’re in for some challenging encounters.

As mentioned before, you play as the harbinger after you’ve been summoned in response to the Unbound. You have a mysterious connection to a substance called Ash that can be used to form all manner of things. In this case, you’ll be using it to create troops, build structures, and use special abilities. All of these tools are necessary if you want to eliminate the Unbound. A key part of doing so is dealing with the golem gates, which act as portals for the hordes to enter through and spread chaos. 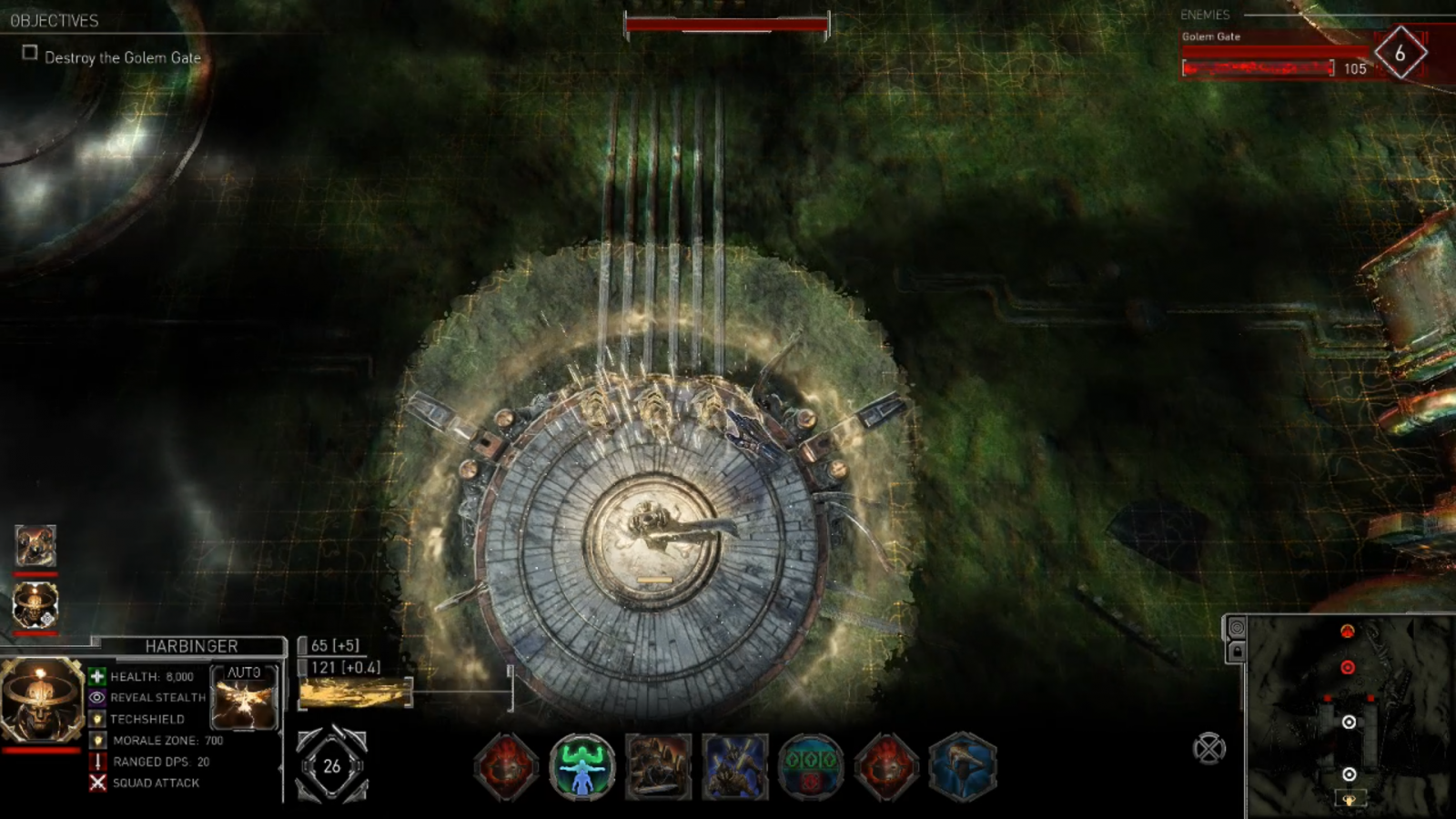 The gameplay is a mixture of real-time strategy and card combat. You have the harbinger as your starting point with a circular field of vision around him. At the bottom of the screen, you have glyphs that symbolize what you can create. These come from your deck that you’ve created. When the harbinger is standing still, a meter surrounding the deck continuously fills; when it fills, you draw a glyph and the process repeats unless your hand is full. Above the glyphs is an Ash meter that replenishes over time. Levels have special capture points that increase your Ash replenishing rate as long as you control them. These are especially important since every glyph has its own Ash cost in order to summon.

In addition to the Ash requirement, you also have to place them within a clear vision area. Clear vision areas are areas surrounding your harbinger and troops which get covered in light. The size of the circle varies depending on the unit or structure, but they all allow glyphs to be placed within them. I really like this aspect because it means that you don’t have just one set point where you send your units from. Wherever your forces are, you can drop reinforcements. I used this plenty of times to create split second pincer attacks and even to plaster an area with defenses. Being allowed to throw down forces right in front of a boss as backup for the units that are already in combat feels amazing.

Golem Gates starts you with a starting deck, but after winning battles, you unlock more glyphs that you can add to the deck. You can either stockpile your deck with a ton of cards or keep your deck size smaller in order to get the cards you want quicker. While you play, if you run out of glyphs to draw, the discarded glyphs get shuffled into a new deck. It takes around 15 seconds and the worst part is that you can’t perform any actions during this time. Your units will still continue their current actions, but you can’t initiate any new ones. I understand the idea of you having to wait for the new deck to be made, but being prevented from doing anything during that time hurts. 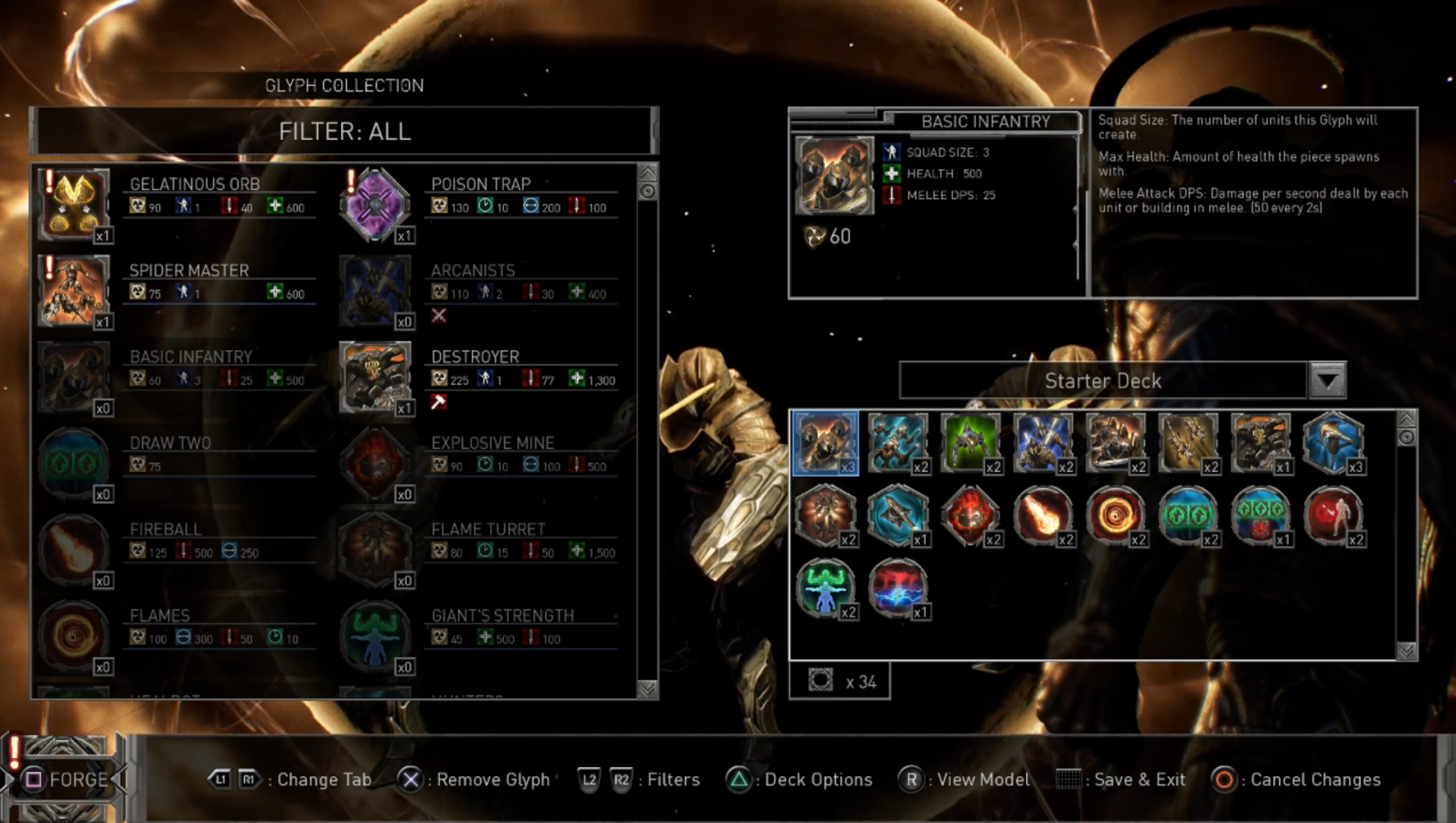 The various glyphs that you can make use of are a combination of forces such as troops and mechs, structures such as scout towers and traps, and special abilities such as fireballs and pacifying debuffs. There are a lot to choose from, each with their pros and cons. One of my favorites is one that buffs a single unit with an extra 500 health and an extra 100 damage done until they die. There’s also the spider master unit that spawns spider minions and the destroyer golem that can crush its foes. You’ll want a good mixture of everything in order to have all your bases covered.

The game has four different modes: story, trials, survival, and versus. Story mode consists of a prologue and three acts, with five missions in each act. Each mission has an objective that you’re tasked with completing, and you’ll need to strategize in order to successfully do so. Building up your forces is a start, then dividing and conquering tends to be an effective way to make use of those larger numbers. Group up too much and one powerful enemy glyph can wipe out most of, if not your entire army.

Trials gives you various matches to play in that have specific maps and guidelines to follow. The goal is to test your skills and see if you can complete the trial’s challenge. Finishing a challenge rewards you with a combination of pride, more glyphs, and potentially more trials. Survival tasks you with surviving 15 minutes on a map; this mode can be played solo or while competing against somebody online. I searched for online sessions during my time with the game, but nobody had rooms created. I even created sessions of my own and waited a short time for anyone else to join. Unfortunately I had no luck, but playing solo was good enough. Versus mode had similar issues. I could set up matches against the AI and play with no problem, but there wasn’t anybody online to fight against. That was a bummer because I wanted to test out how well the connectivity was, but it seems that the online scene isn’t well populated for Golem Gates. 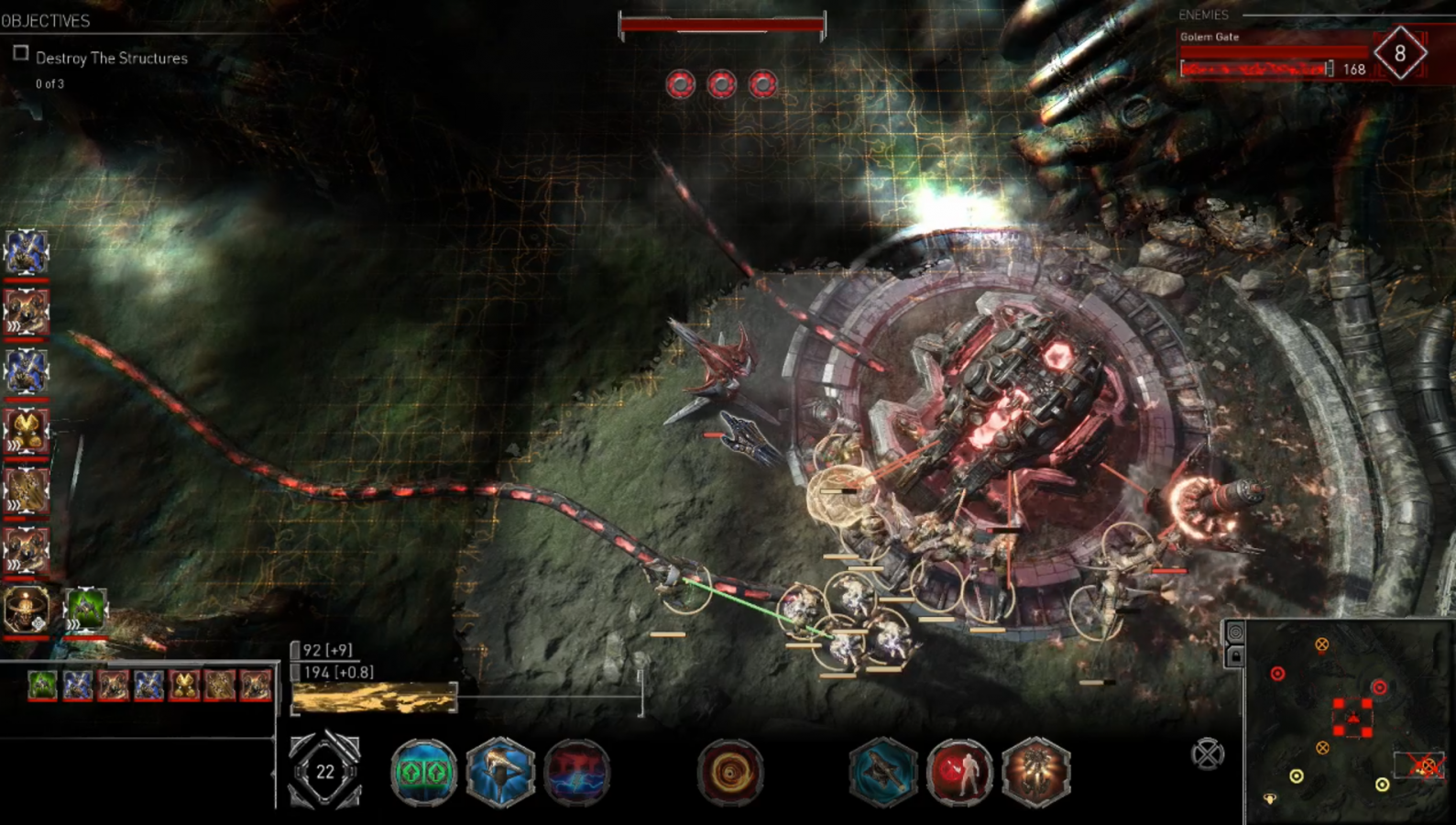 The gameplay isn’t hard to learn, but it definitely takes time to master. Strategizing and thinking on the fly are both crucial if you want to progress at all. I had to restart some missions multiple times before winning, and I even made use of saving in the middle of missions. This is helpful in case you make a mistake and want to use a checkpoint instead of starting the entire mission over. Sometimes you put some good time into a mission and don’t want it to go to waste. Other times, the game may decide to crash on you and ruin your rhythm. For me, that happened twice in chapter 8 and it was frustrating. I’m not sure if it was just an issue with my game, but I feel that it’s still worth pointing out just in case. Even so, the gameplay is challenging enough to keep you engaged and ready to keep fighting forward. The card game aspect makes it even more interesting and is one of the things that initially caught my attention. All in all, even with some of its flaws, Golem Gates is still an enjoyable RTS game that provides a clever twist on the RTS formula.

Golem Gates is a clever mashup of real-time strategy and card game gameplay. Creating troops from the glyphs you draw and Ash you build up is a nice twist. Difficult situations and some potential crashes put a damper on the fun and may cause you to look elsewhere.

Codi loves to play video games and watch movies. He will watch almost any kind of movie just to experience them. His ideas take inspiration from the shows and movies he watches, and games he plays. He also loves a good pun.
Related Articles: Golem Gates
Share
Tweet
Share
Submit