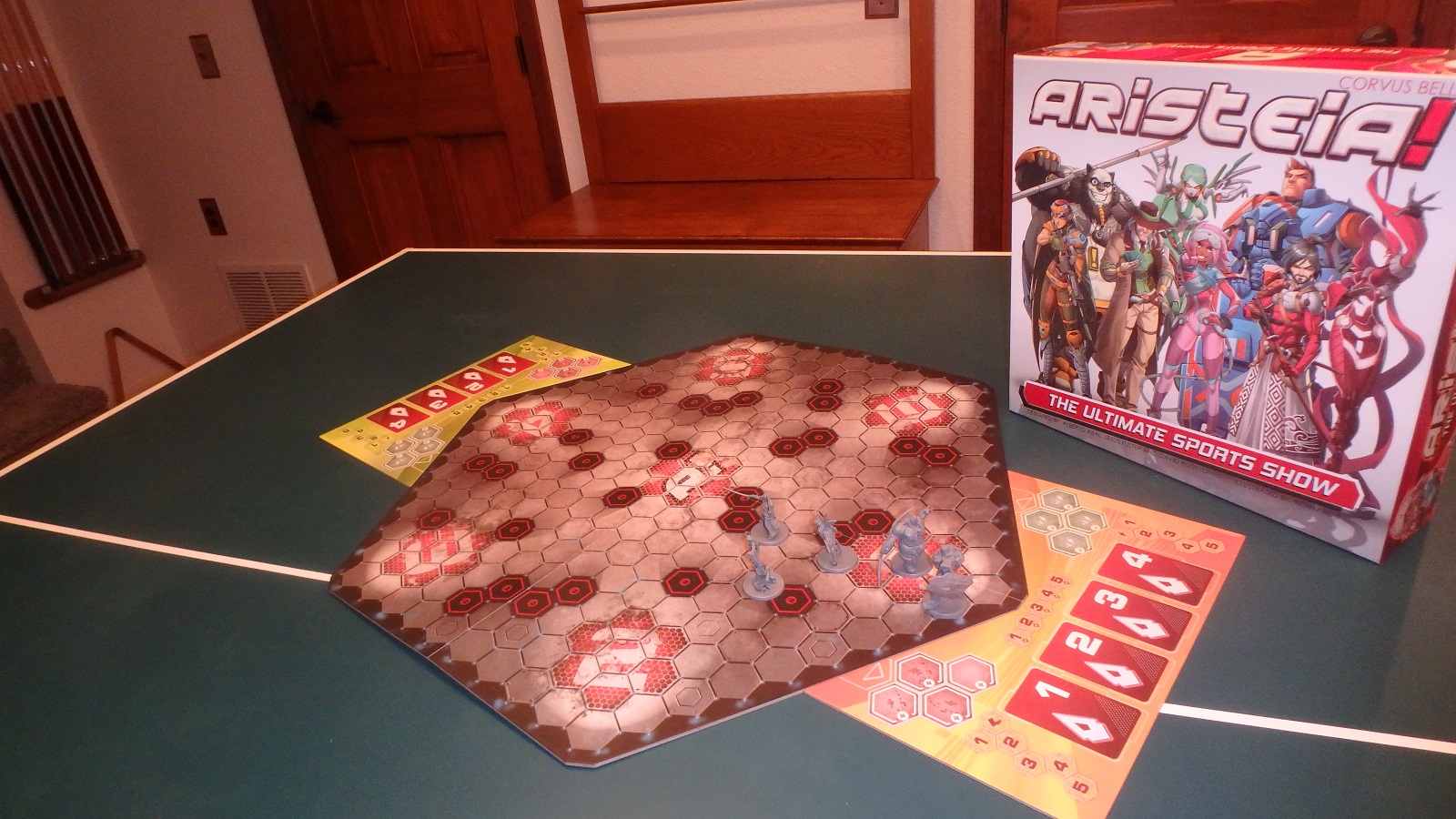 When I first saw Aristeia, I was extremely hyped. I had been wanting an introductory skirmish-level minis game in a box for a hot minute, and given that publisher Corvus Belli’s main title, Infinity, is inarguably one of the best  games on that level, if a bit chunky on the rules, I just assumed out of the gates that Aristeia was exactly the game I had been looking for. But it isn’t, really.

The first, and biggest, reason is its pretty rough rules. I’m not exaggerating when I say these rules are so bad that when I think about Aristeia I get a little angry. My best guess is that whoever was in charge of the rulebooks had heard of the success of Fantasy Flight’s two book system, but didn’t bother to read any of them to see why they work so well. So the rules are split into two books, but the how to play doesn’t actually teach you how to play, opting instead to walk you through a mock round of the game.  Problem being, it never explains why anyone would bother to do any of the things it shows, because all of the minutiae of basic game objectives and how someone would actually go about winning a session of Aristeia are over in the rules reference. The How to Play does, however, contain a good deal of characters getting status effects, but of course any explanation of what these statuses even do is once again over in the reference book. It all adds up to Aristeia having one mediocre to bad rulebook inexplicably split into two. 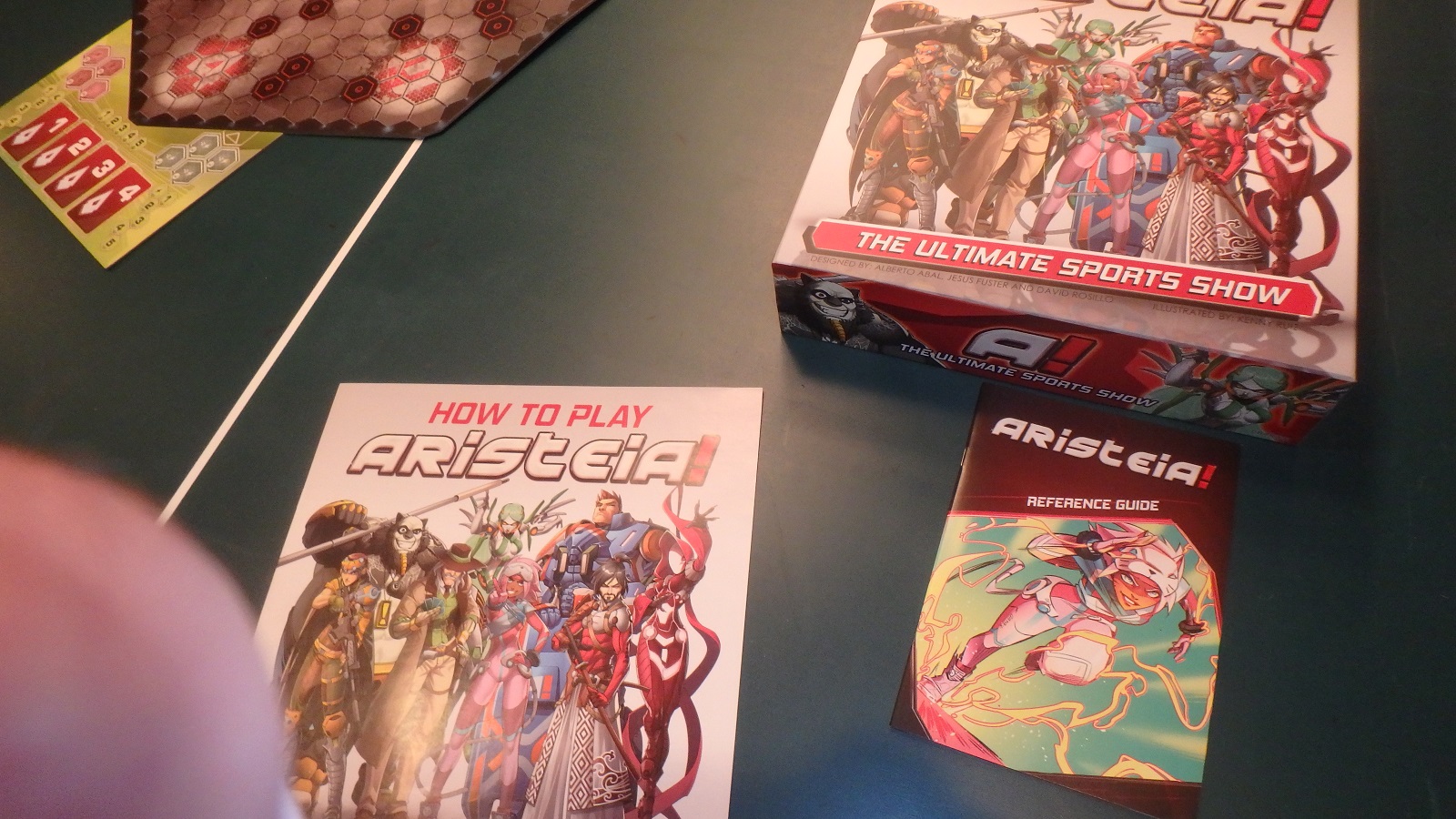 Unfortunately, poor use of the two book system isn’t the only questionable decision in Aristeia’s rules. For whatever reason, the map uses a hex grid, and the designers decided that line of sight would use all six vertices of the involved hexes, leaving players with a clunky and overcomplicated line of sight and cover system that is literally the worst of any of the many games I’ve played. My hardest sticking point is the section of the rules reference that pertains to the game’s scenarios, which mentions how scenarios will have team building restrictions that are never mentioned again, without actually explaining how the two of you would actually go about determining which scenario you’ll play. This section also suggests  that in order to play a full game of Aristea, you’d have to pick up either a second copy of the base game or one of the expansions. If I’m severing ties with eighty-plus portraits of George Washington to play a minis game, that’s enough to build most of a list for either Marvel: Crisis Protocol or Malifaux, or dabble in two teams enough to play a low-points beginner game, both of which would have a similar amount of rules overhead to learn a full-fledged minis game.

Apologies if this review seemed a bit harsh, but there’s just so much wasted promise in this box.

When you add in an expansion, it's entirely plausible that Aristeia lives up to its promise, but the core box really falls short of expectations, and for fifty dollars, you can get a much better lightweight minis experience out of Unmatched.

Nick grew up reading fantasy novels and board game rules for fun, so he accepted he was a dork at an early age. When he's not busy researching the intricacies of a hobby he'll never pick up, Nick can be caught attempting to either cook an edible meal or befriend local crows.
Related Articles: Aristeia!, Tabletop
Share
Tweet
Share
Submit