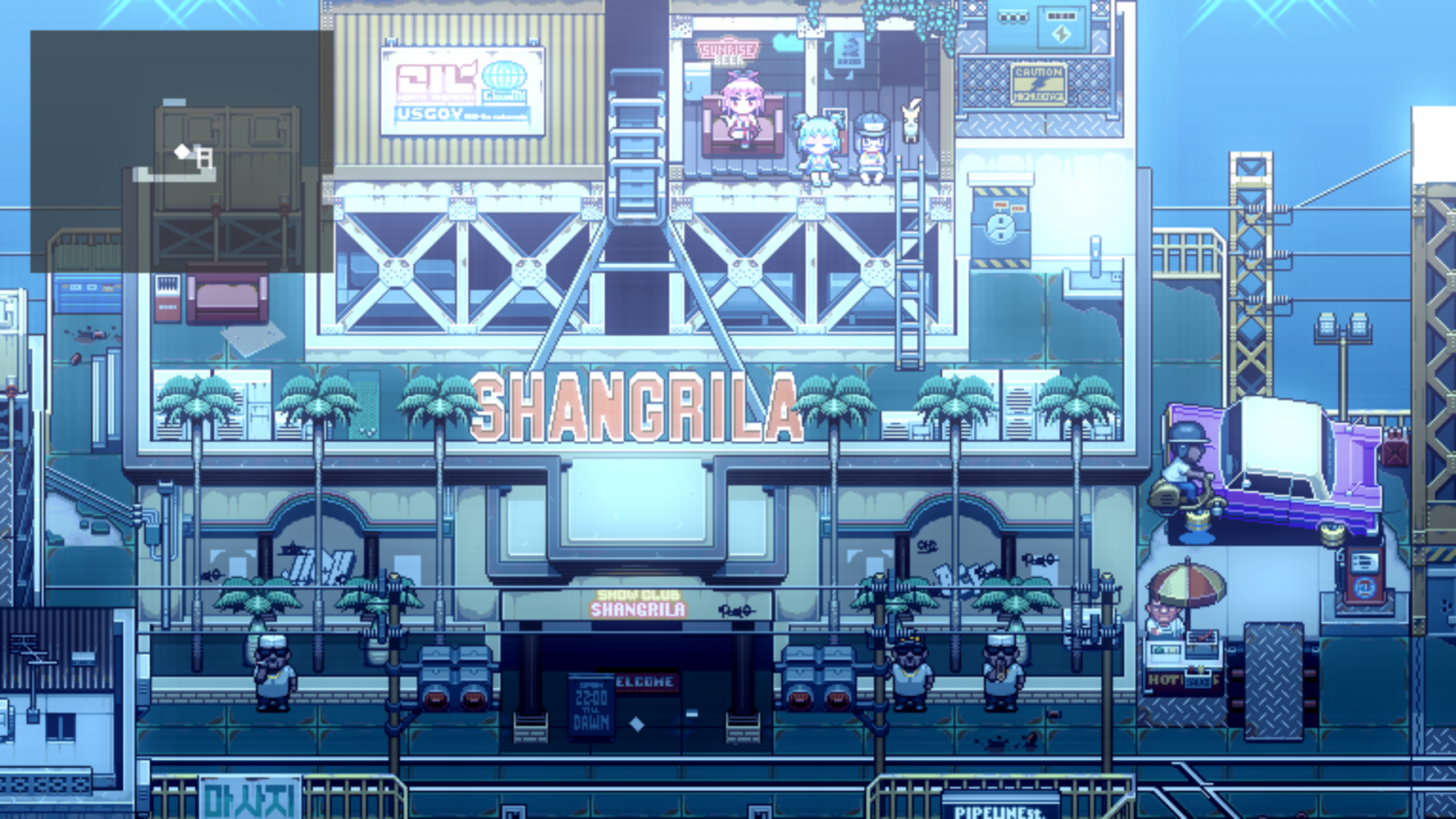 RPG Maker games get a bad rap. The engine is easy to use, so there are a lot of bad games made using it by amateur developers, but you have to make some bad games before you can make a good one; I see those titles as more of a learning experience for the creators. If you look a bit deeper, you can also find some hidden gems made using the software, like Lisa the Painful and it’s followup Lisa the Joyful, Yume Nikki, Escaped Chasm, and many more. Orangeblood has the makings to be a fantastic RPG, but unfortunately it ends up being less than the sum of its parts.

In Orangeblood, you play as Vanilla, a pink haired anime girl whose goal is to… I’m gonna be honest, I have absolutely no idea what this game was about. It was made by a japanese developer and the translation is just a mess. Some sentences are incoherent and sometimes text is just not translated at all. All I could glean from the roughly six hour main story is this: Vanilla is on a job of some sort from the US government to explore a facility in the asian city of New Koza. Along the way she picks up three equally foul-mouthed friends who will help her do crimes and stuff. From the Steam page, it apparently takes place in an alternate 90’s timeline? It’s a weird premise to say the least, but it’s unique. 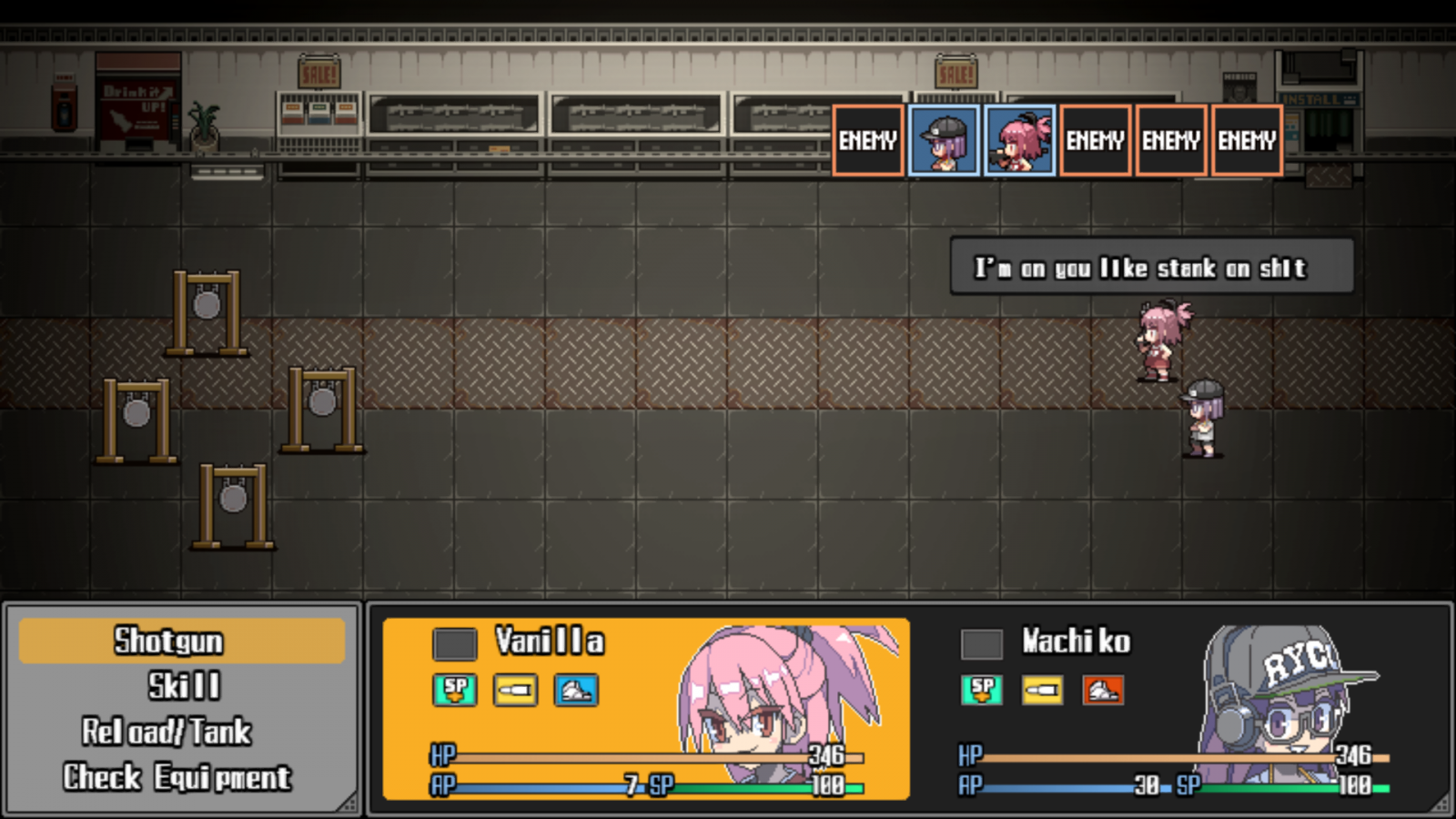 Vanilla and co. can each equip a variety of guns, shoes, and body armor that will give them certain buffs in fights you pick with enemies on the field. Each gun has different properties, such as damage, bullets fired in a single turn, clip size, and so on. A gun’s clip size is especially important to remember, because if you try to fire with an empty clip you’ll be forced to reload instead and be more vulnerable to attacks as a result. However, guns that fire more in a single attack will give you more SP, which is used for special attacks, per round. This system is extremely interesting and could add a lot of depth, but unfortunately it’s very easy to break the battle system completely. For example, Yazawa has a special attack costing 40 SP that hits all enemies and ignores armor. Early on in the game, I found some shoes that allow her to start every battle with 40 SP, and thus kill every enemy in every encounter on the first turn. You can do something similar with every party member, like giving Machiko the DJ a weapon that generates massive amounts of SP every turn and essentially allow her to fully heal and revive the entire party every other round. Your party is just too powerful for any foes, including bosses, to stand a chance, and it takes what could have been a very interesting, dynamic battle system and makes it boring and static.

Something that is undeniably fantastic about Orangeblood is it’s visuals. The pixel art is incredibly detailed and animations are all smooth and have a nice punch when needed. There are several options of color palettes you can choose from, but I would recommend you stick with the default cinema option and turn off the depth of field as it can blur parts of the UI in some areas. Dungeon areas can get a bit bland or same-y, but the main map is just so intricately detailed and fun to explore, even if it is small. Orangeblood also boasts a hip-hop inspired soundtrack, but I found it to be fairly bland and forgettable. Most songs only consist of a beat, like a typical hip-hop drum loop with maybe some accompanying synth, and they all sound fairly similar.

Orangeblood is a mixed bag. On one hand, it’s visually striking and has a conceptually deep battle system. On the other hand, the english translation is incomprehensible and your characters are too powerful to really have any sort of challenge or interesting fights. It won’t physically and emotionally destroy you like the Lisa games, but it’s still a decent enough RPG that I can recommend if it’s on sale.

David is the kind of person to wear his heart on his sleeve. He can find positives in anything, like this is a person who loved Star Fox Zero to death. You’ll see him playing all kinds of games: AAAs, Indies, game jam games, games of all genres, and writing about them! Here. On this website. When not writing or playing games, you can find David making music, games, or enjoying a good book. David’s favorite games include NieR: Automata, Mother 3, and Gravity Rush.
Related Articles: Indies, Orangeblood
Share
Tweet
Share
Submit