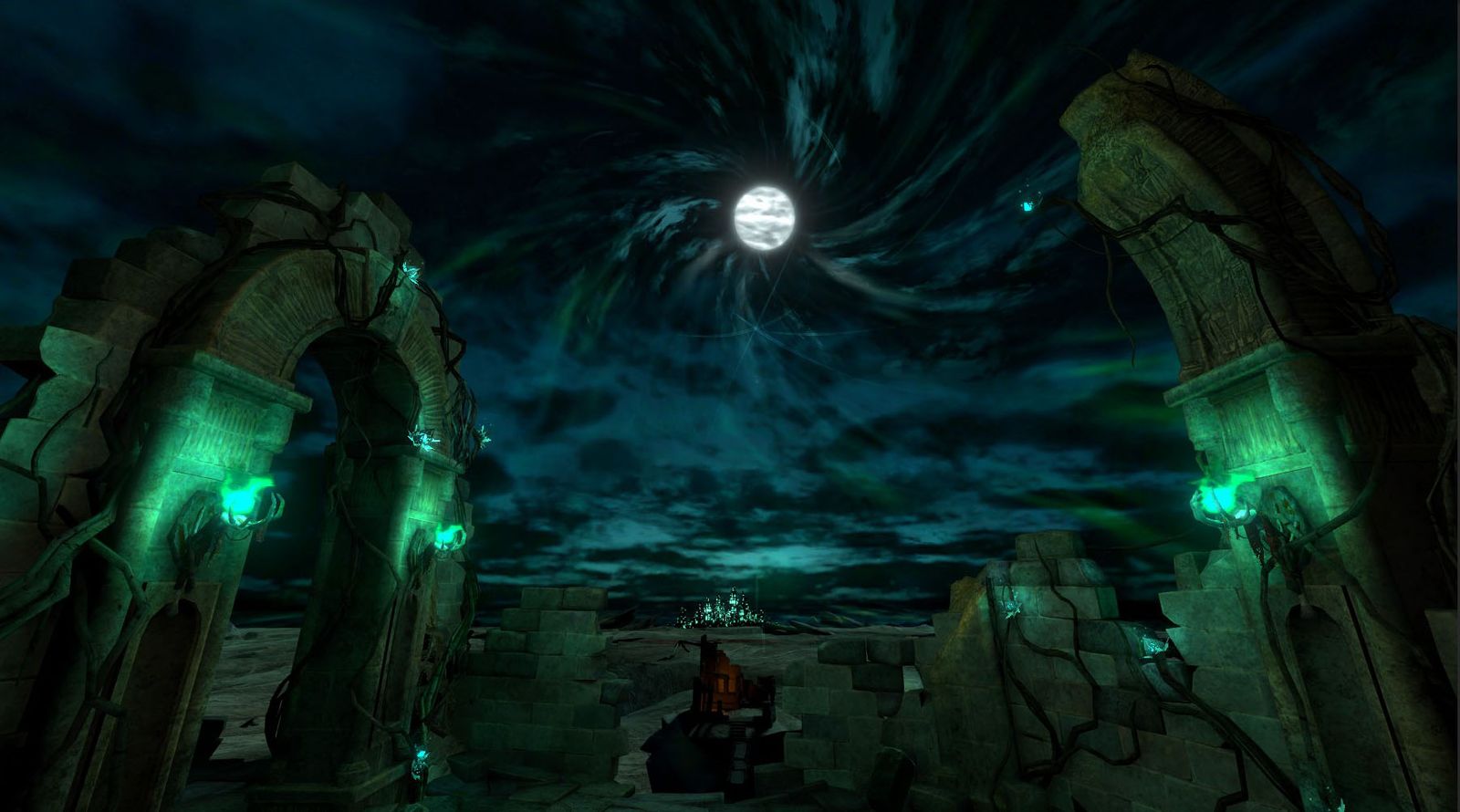 There’s something amazing about using magic in VR. Maybe it’s because I love the idea of spellcasting, or maybe because, if done right, it can be incredibly immersive. We’ve got amazing titles like The Wizards – Dark Times and Waltz of the Wizard, and they’re a ton of fun to jump into every now and again. So, when I learned about Flow Weaver I was very interested – VR escape room with magic elements? What’s not to love! Well, unfortunately, there’s a lot.

Flow Weaver is a multidimensional VR escape room game with a lot of issues. First things first, the story. It attempts to sit up front like some sort of intellectual and creative narrative that promises to be interesting, but it’s quickly marred by how boring and redundant the plot elements are. It’s incredibly forgettable, but I’ll do my best to remember and recite some of it. You play as a Flow Weaver, a powerful wizard that knows how to travel between dimensions of magic. However, during your dimension-hopping you were captured by a reptilian-being named The Necromancer. She hopes to learn how you travel to all these extra dimensions that she can’t view or access. The only one she’s aware of is the Shadowrealm, but there’s the Skybridge, Feylands, Underworld, and (!) SPOILER ALERT (!) the Otherwhere. You’re bound to a single spot (because the game is a seated VR experience), so you have to jump between dimensions until you find the runes that will break your bonds. 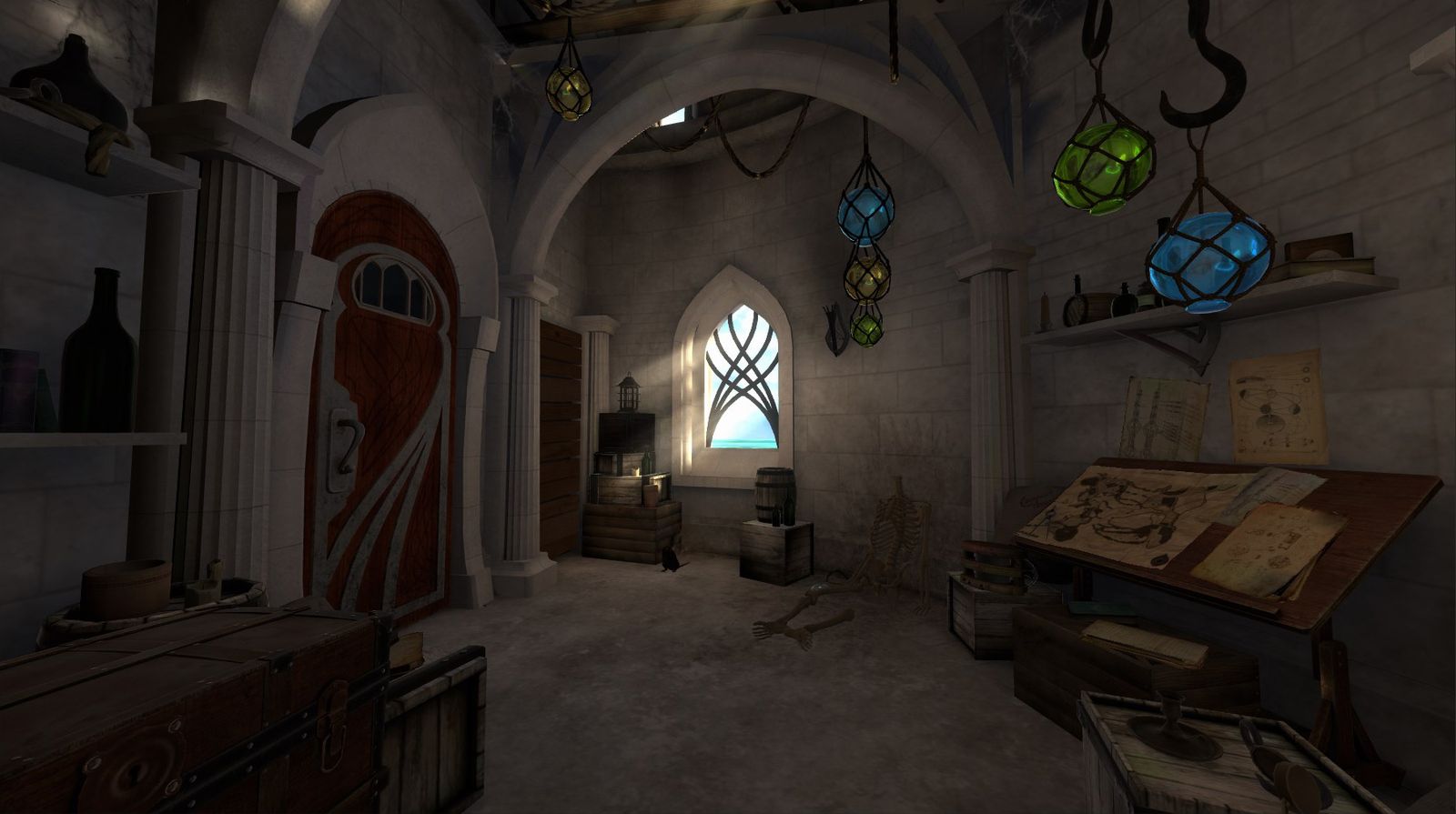 That’s the gist of it, and there’s a lot of story pumped into this title that you can unlock through listening to each of the player-character’s thought bubbles (basically a journal system for the story). However, once you listen to the first bit of dialogue between the Flow Weaver and The Necromancer you can easily pick up what’s going to happen. Well, right until the end.

When you hit the Otherwhere, you’re met with some random floating head. This head is, I suppose, some Sheogorath-like being that now has trapped the player in this new dimension. I think that’s right, because there’s no real explanation for what the hell the ending of the game is. Maybe it sets up a sequel, where you’ll again have to play with some of the most mind-numbing gameplay elements I’ve experienced in a VR title (I’ll touch on this soon). Hell, even the voice actress seems disinterested in the story, because on one of the last lines of dialogues you can hear her realize ‘WTF am I reading?’ as she staggers over them. 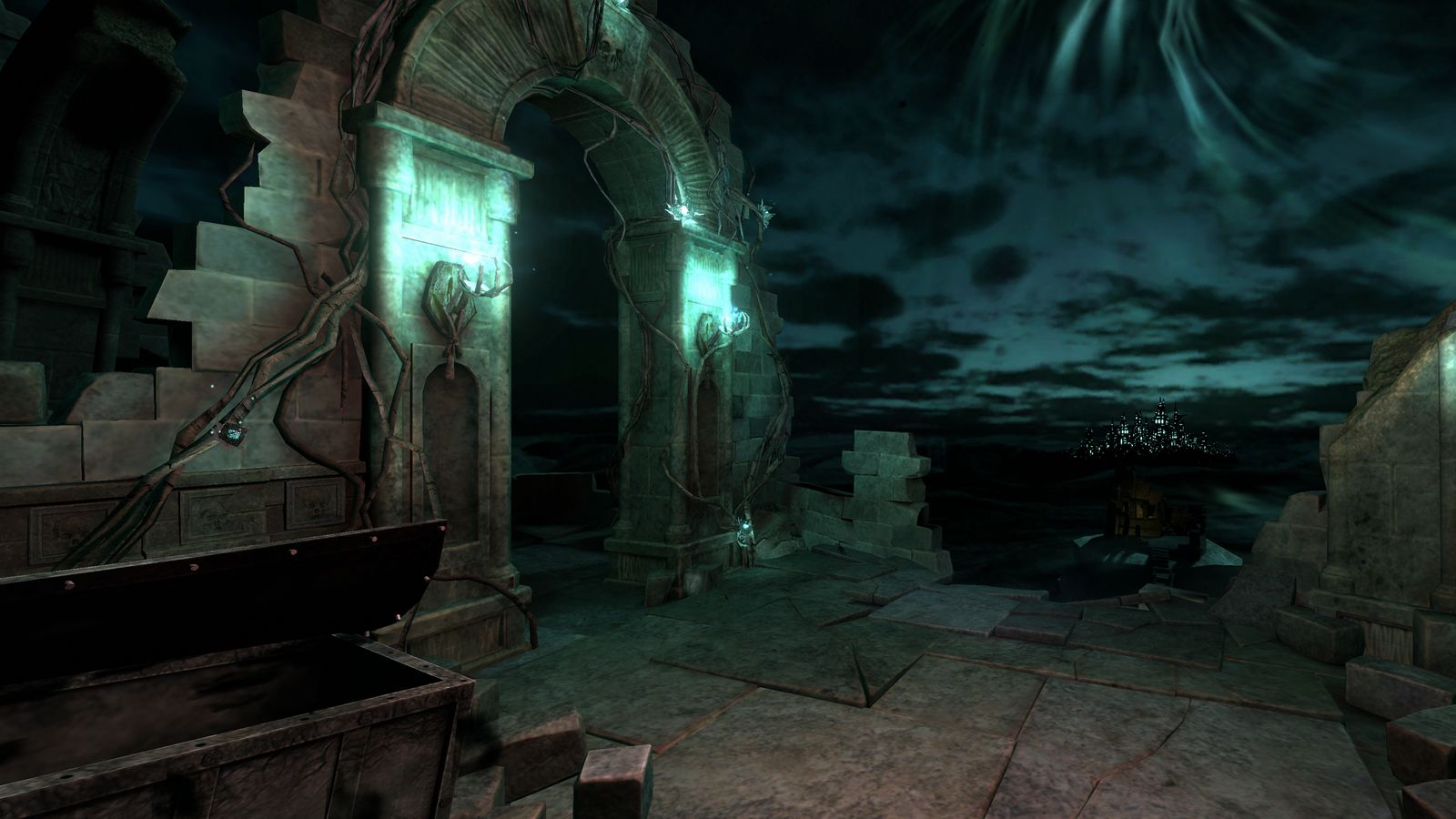 So that’s the story. “What about the gameplay?” I hear you asking. Well, it’s definitely not any better. Flow Weaver has made one of the worst design choices for a VR escape game to date. The purpose of a VR escape room is to allow you to walk around, look through everything, and pick up everything. I understand that you’re trapped and you can’t physically move and that’s meant to set up the premise of the story, but that design choice is a terrible idea when implemented in an escape room capacity. I mean, if I can’t move, then why can I still hop between dimensions? That doesn’t make any sense. There’s also a line said by the Flow Weaver that’s something along the lines of “I guess the good thing about being magically bound is that I can’t fall” — it’s like even the writers forgot that the character shouldn’t move, that’s how forgettable this experience is.

As for the rest of the gameplay, well there’s not that much more to comment on. Each dimension eventually provides you with a new skill that will help you further in the puzzle. The Shadowrealm gives you with an ability to grab objects from a distance, Feylands gives you an ability to talk to animals — essentially, every ability relates to the place it’s from. They’re not necessarily fun either, they just have a purpose. For example, in the Underworld you get an ability to light things on fire, but it’s only ever used one time. In the Skybridge, you’ll get an ability to call upon a storm, which you’ll only ever use twice. Even the Feyland’s commune with animals ability is used around 3 times. You’ll only ever really need the Shadowrealm’s ability, and it’s so boring. You just point the controller, pull the trigger, and move the object backward and forward with the thumbstick. 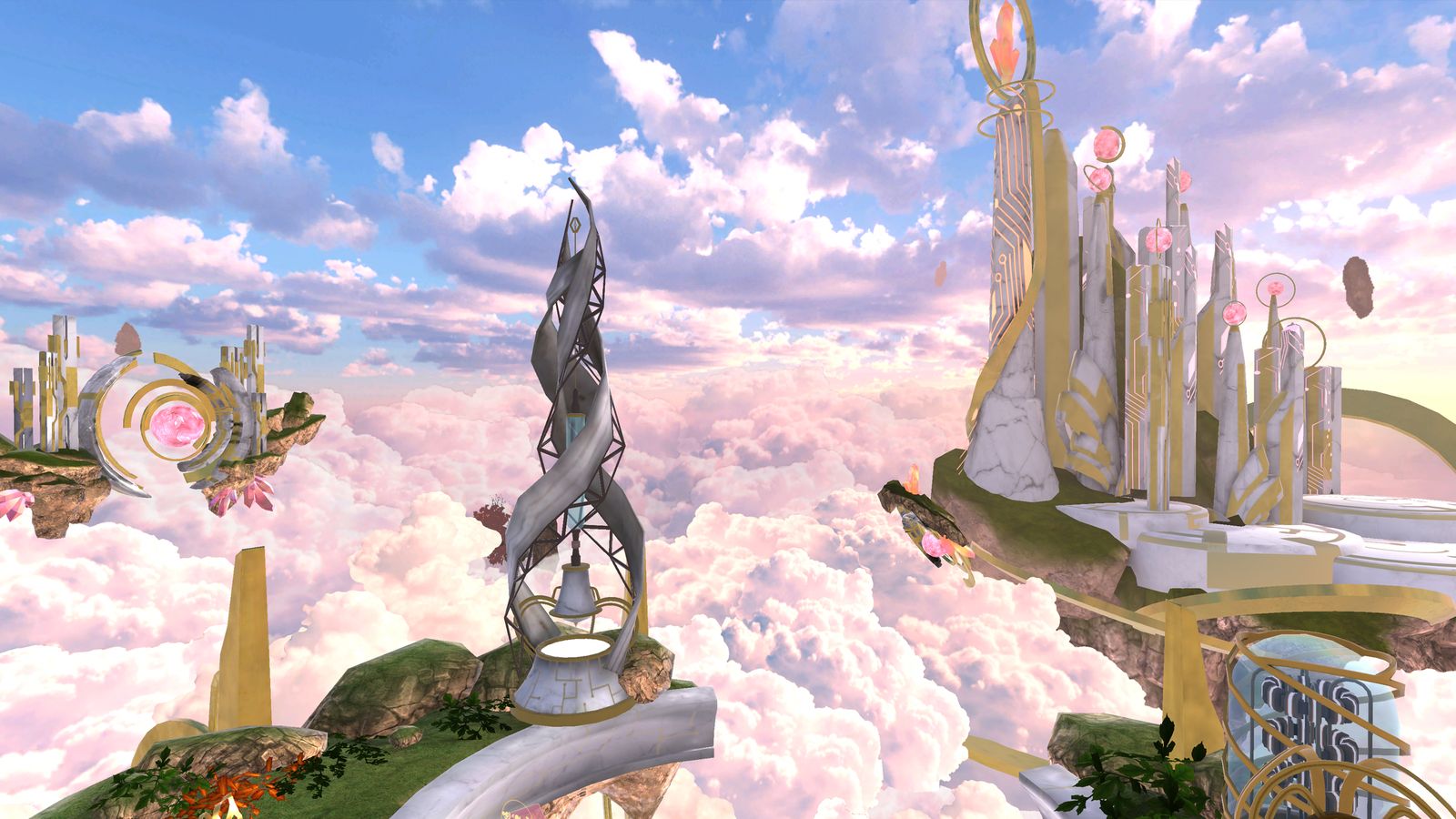 See, the reason why this game becomes uninteresting after 5 minutes is because there’s no excitement to the abilities. I thought there would be some really fun abilities like shooting fireballs, casting electricity from my hands, changing an object from solid to liquid — just cool spellcasting stuff. But it’s far from this. Everything has one purpose, and all you’re doing is jumping into your Planar Compass (which allows you to jump between dimensions) to select an ability, casting that, jumping to another dimension to see if that affected anything — rinse and repeat. I did think that the whole butterfly-effect/changing something in one dimension affects another trope was rather interesting, and I’d love to see that used properly in some capacity.

Poor writing and boring gameplay is not the only thing this game has to offer — it also has an immense amount of bugs. I’m not even sure how this one got past quality control. I could safely say this game has the second most annoying or game-breaking bugs, just behind Cyberpunk 2077. For example, in the Skybridge dimension if I accidentally double-clicked the bird that’s meant to give me a rune it ends up stopping at the wrong spot (hovering ever so slightly off where it’s meant to stop so it never drops it). In the Feylands I can pull the acorn out of the ground with the Shadowrealm ability (it’s not meant to move) and it can’t be returned to that position to grow. If you try to access the Planar Compass while someone’s speaking you’ll be soft-locked and never be able to leave that dimension, with the only fix to reload your save and lose all that progress. I don’t know how many times I accidentally did that, and how many times I had to reload a save and sit through the same, boring, 3-4 minutes of dialogue just to progress. 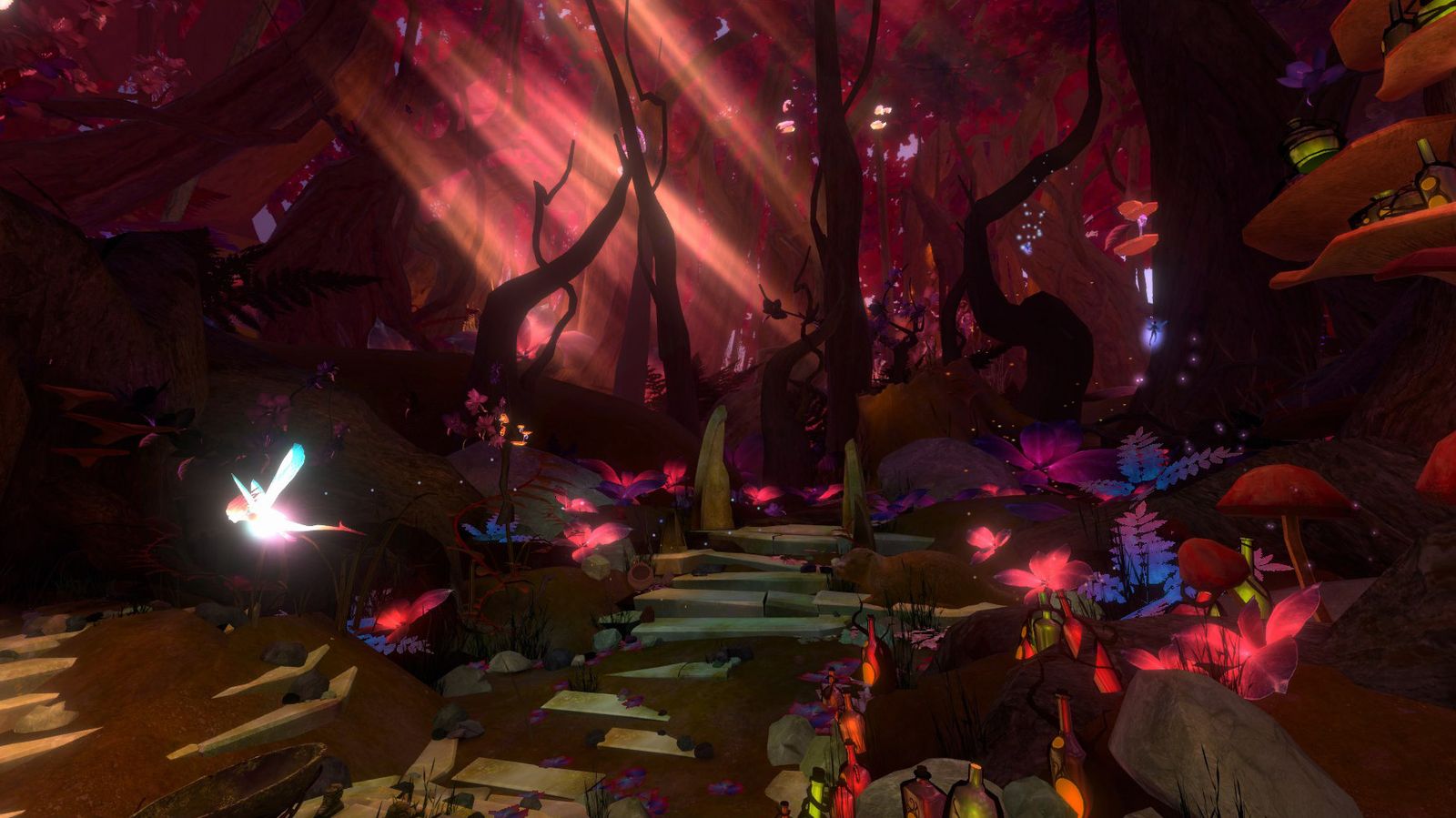 There are so many more bugs than just these few that it would likely take me a couple of paragraphs to get through, but I think it’s safe to say that you understand my point. Bugs and glitches are not the only issues though, it’s also how irritating it is being stumped. I know that sounds highly subjective, but hear me out. One of the biggest issues I had with this game is how it lacks a solid hint-directory system (if you’ve ever played The Room series on iOS and VR then you’ll know why a solid hint system is necessary). Because of that, I sat for many hours just stumped on certain tasks. The biggest offender was the large machine in the Underworld. You have to place cogs all around the machine to get it to power up. If you access your magic-sensing ability you can find certain points where you can interact with it in some way (this acts as a sort of hint system, but it’s very bare-bones). Now, you place all the cogs on the machine, referring to your magic-sensing ability if you need to, and then it starts up. But wait, it’s not starting up. What’s going on? Well, as it turns out, that magic-sensing ability is also bugged and it doesn’t show the last spot a cog is meant to go. The last spot is directly in the middle at the bottom of the machine, and I only found it because I slowly dragged a cog over every single pixel on that damn machine until I found a little plume of colored pixels that highlight that I can interact with it. Even visually it’s near impossible to find the right spot because it’s hidden behind sheets of metal, and also because this game is so low-poly it’s basically a PS1 game turned VR. 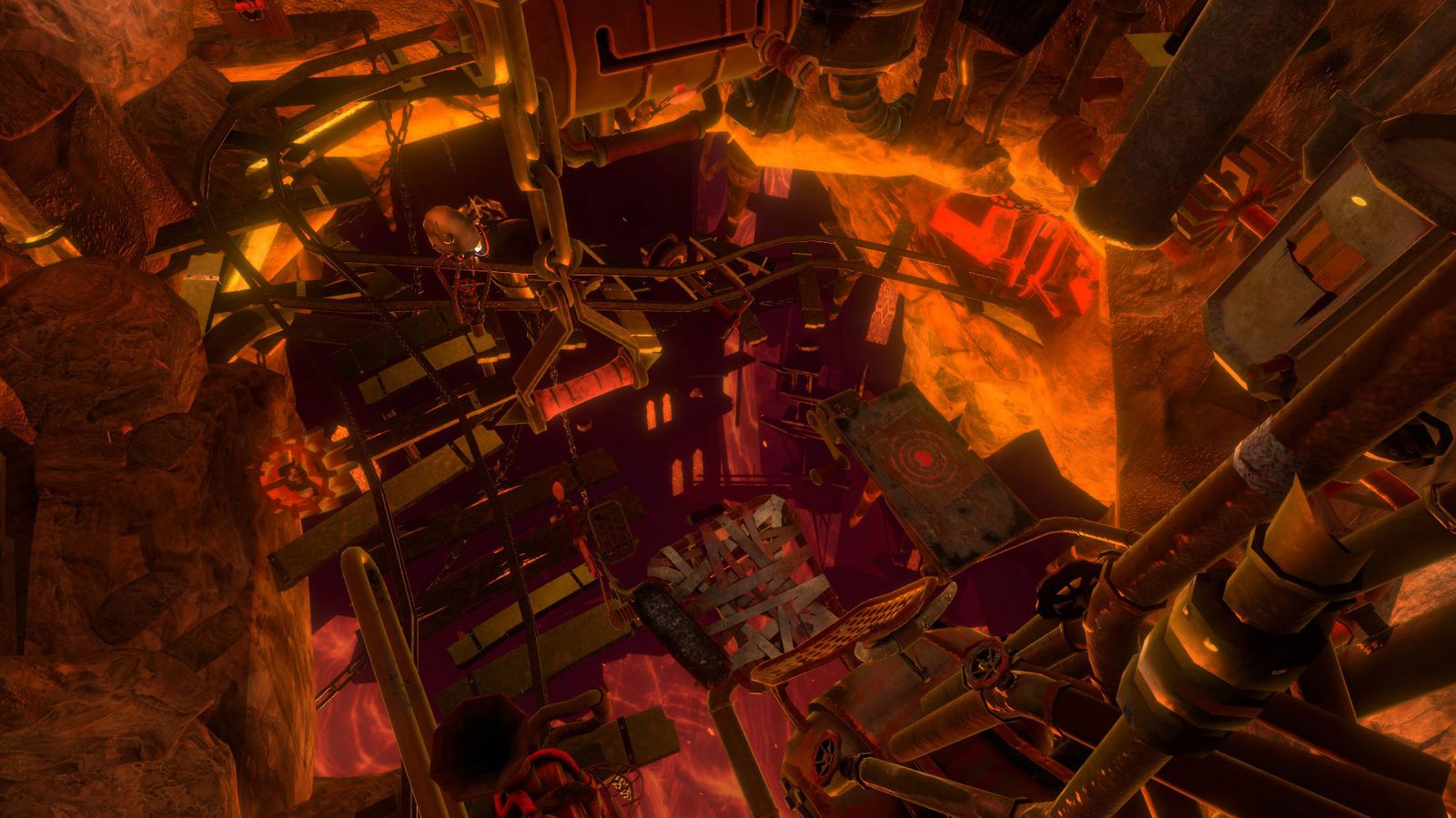 The last thing I’ll touch on is how bad it looks for a VR game. Sure, it’s on the Quest and developers need to make adjustments so it can run on it, and lowering the textures makes sense. But there are two problems with Flow Weaver: 1) the screen door effect is always present and it’s very hard to determine what objects are at a distance, and 2) because you can’t get up and move around without the screen going black and telling you to sit down, you can’t investigate up close what an object might be. Making a seated VR game with faraway objects that must only be interacted at a distance is irritating to play because you’re limited at what you can and can’t do and see. Eventually, it becomes so tedious to play that you’ll wonder why you’re even playing it – quickly breaking the immersion, the single most important thing in a VR game.

There are not many games that are marred with so many issues as Flow Weaver. The gameplay is boring, the texture quality is akin to a PS1 game, the story is barely interesting, and there are far too many bugs and glitches to count. Trudging through the mess that this game is, the only redeemable quality is the dimension-hopping --- a great idea that definitely needs to be implemented properly. As for now, Flow Weaver is not one I’d recommend getting your hands on.

With a deep interest in writing, Ben followed that into a Journalism degree. As an avid lover for gaming, he is constantly expanding his library with console, PC, and VR games. He's obsessed with stealth games and loves hunting down the smallest of details inserted by devs.
Related Articles: Flow Weaver
Share
Tweet
Share
Submit