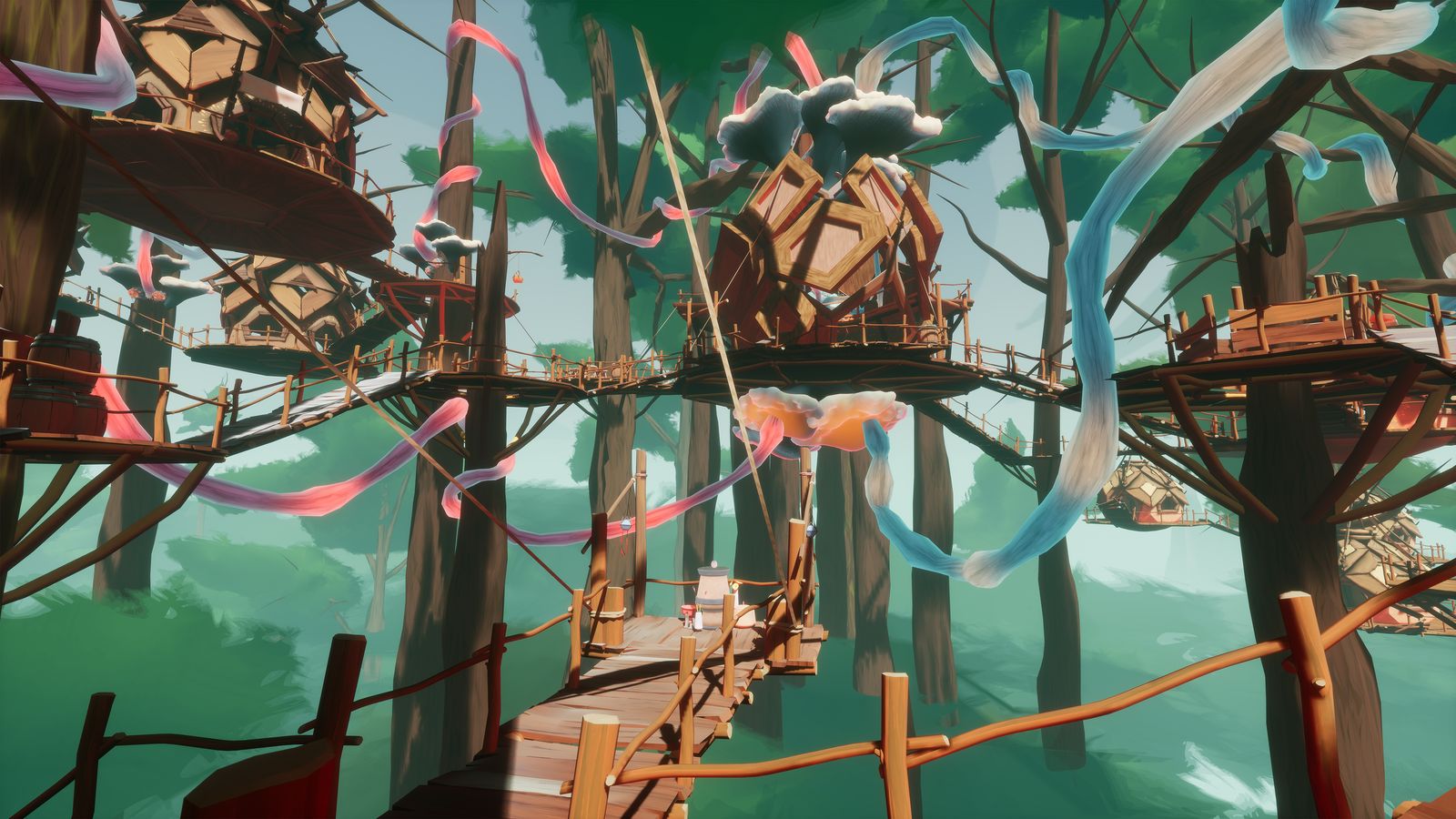 Usually, at the start of my reviews, I like to open up with something about the game and how it’s affected me personally. But, Maskmaker is a very strange VR experience. Sure, I’ve played lots of games that have a similar atmosphere or plot points, but ultimately it’s rather a unique game that I haven’t experienced before. I mean, it’s nice, because fresh content in VR is… refreshing, and with how saturated some VR genres have become it’s great to know there are still some genres that have yet to be shaped. Maskmaker is definitely one of them.

The only other VR game that comes remotely close to Maskmaker was a long-forgotten itch.io experience that moved your character on a track while music was playing and a story was told to you. And that’s kind of what Maskmaker is, a bedtime story that lulls you into an amazing new world with beautiful landscapes to explore. It’s a bit of a trip, and just for that, it’s an amazing thing to experience. 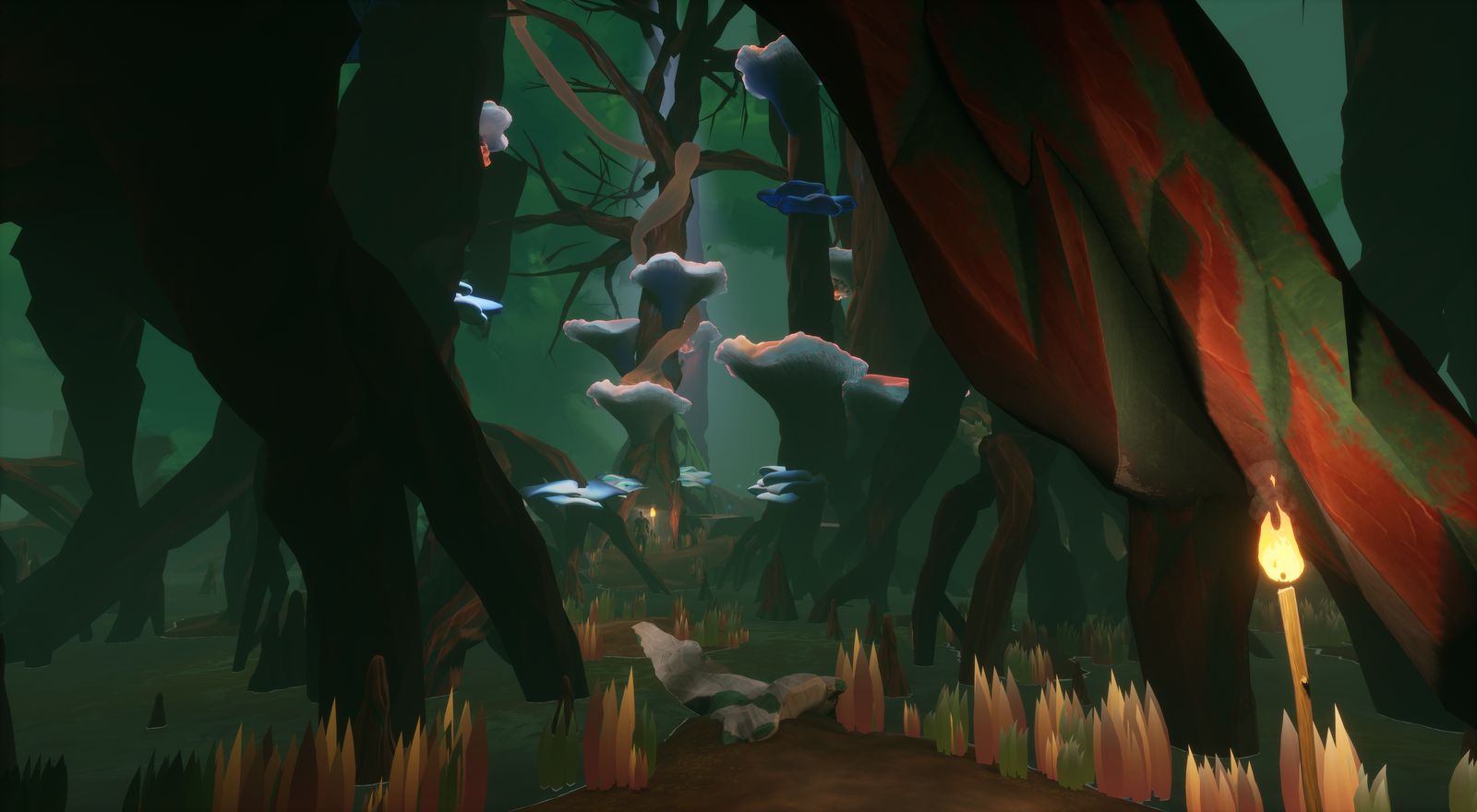 Anyway, I digress. Let’s start with the outstanding question, what is the purpose of this game? Well, without spoiling any of the story (because that’s half the experience of this one) you’re transported into a magical mask workshop to meet the King of the mask realm. He invites you on as his new apprentice, where you’ll pick up the skills to learn how to craft masks that allow you to transverse the different biomes of the realm. Eventually, you’ll learn who he is, what happened to everyone in his realm, and who the true Maskmaker is.

I know, I know, that’s a very barebones explanation of the story. But again, that’s something I don’t want to spoil. The one thing I won’t care to spoil is the crafting system, which has its moments being fun, and other times being tedious. Maskmaker is mostly about finding blueprints to new masks, then finding the resources needed to craft said masks, then painting said masks as per their blueprint, then wearing the mask and being transported through the realm. 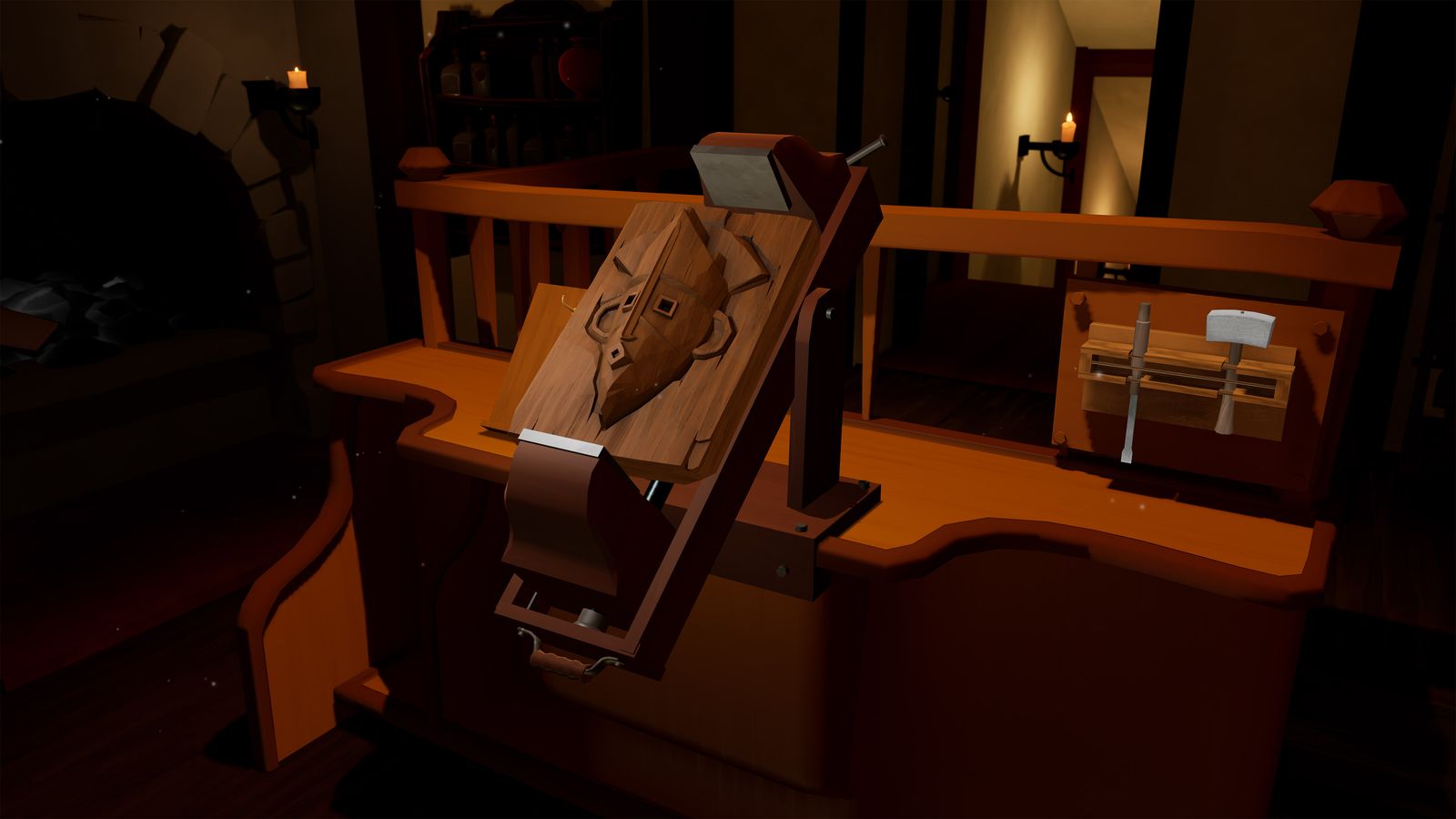 Well, the fun part is as you’d expect it; being transported through the realm is a superb experience as you can experience all the wondrous sights and interesting (albeit few) puzzles the game has to offer. It’s great, and each landscape is even better than the last. It’s also plenty of fun being transported into a new realm and seeing your new body in a broken mirror. It’s a surreal feeling that is not being tied to one sole character, but it suits the game perfectly.

Now, the tedious part. Crafting and designing the shape of the mask is great because you take hold of the tools and shape chip away at a block of wood to reveal the mask underneath. However, collecting the resources that give shape to your new masks is a very tedious experience. The game does a poor job of making this part fun because all you’re doing is running through the world force-grabbing whatever you find until you find what you need. Given that there’s not really much to pick up and examine in the first place, it’s very easy to find the resources you need. I’d have loved if it felt more like a scavenger hunt, where you need to look through drawers or climb trees to find what you need, but it’s definitely far from that. 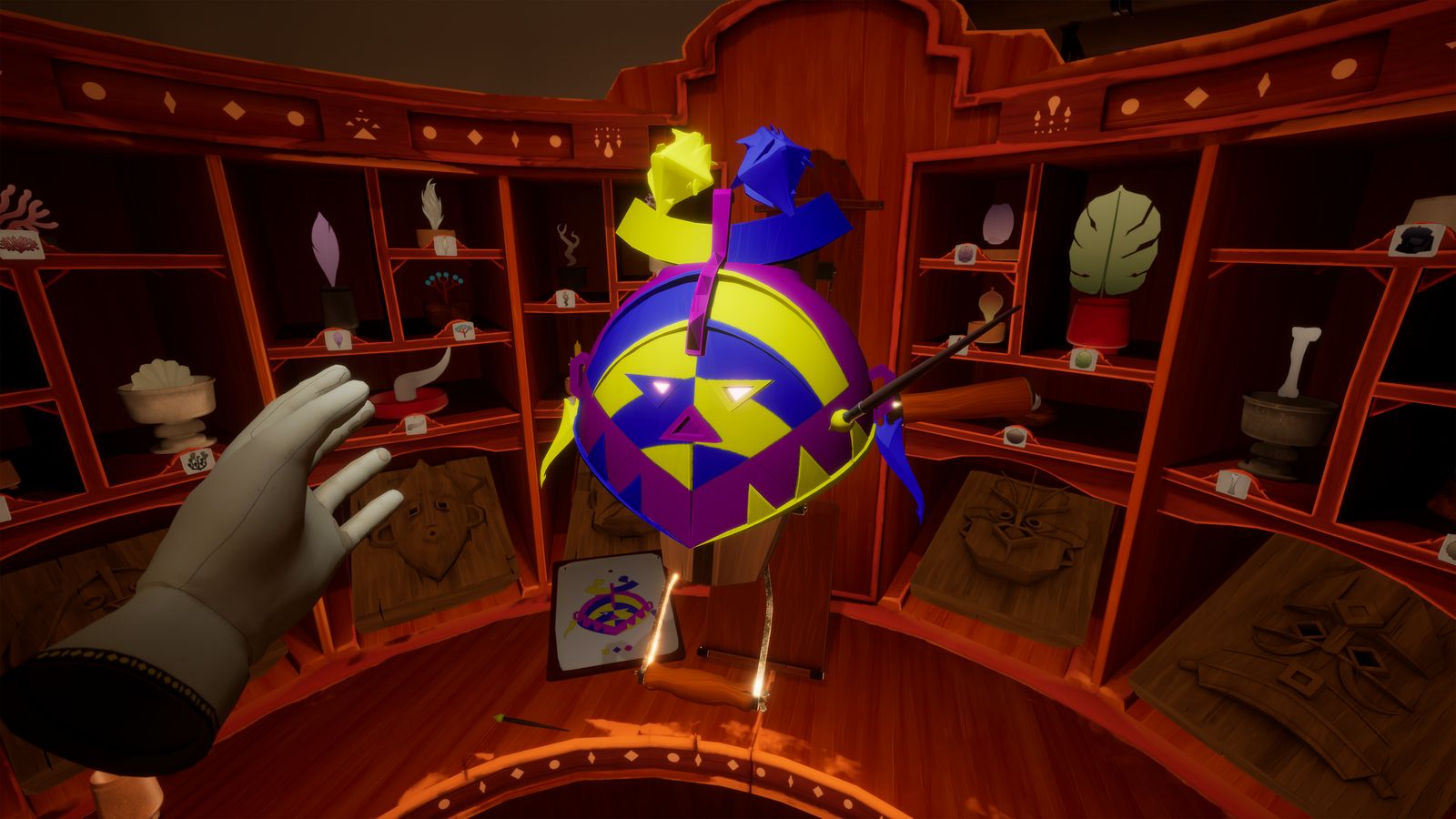 The other part of mask making involves painting, and this is the part I really like. At first, it’s just about dipping all the resources in paint and then connecting them onto the mask. It kind of feels like a bad VR cooking game, where you throw all your ingredients into a dish and magically it’ll make the dish you need. But, once you complete half of the game you’ll unlock paintbrushes. Then it feels more like you’re completing a masterpiece — albeit, in a paint-by-numbers sort of way. It’s a very therapeutic moment in the game, and I felt myself getting lost in the soundtrack and immersed in what I was doing very easily.

The one thing I don’t agree with is the marketing for this game. It definitely doesn’t feel like a puzzle game in the slightest. There are some, and I mean some, puzzle elements, but ultimately they feel very thrown in last-minute compared to everything else this game has to offer. Just going through half the game, I can count on one hand how many puzzles I had to complete to get there. That’s disappointing because the game is essentially a walking simulator, and not having a break every now and again to re-engage the player can make the player feel bored by the content — and that’s exactly what I found myself feeling at these points. What’s worse is that the puzzles are really basic. One great example of this was when I had to herd a billy goat from where he was standing over to a shearing shed. The puzzle is to herd him across several bridges to get him to this shed, and you’ll pull levers to activate or deactivate these bridges. However, it’s so damn easy — all you do is pull every lever once, ring the bell to call him, then he’ll eventually make his way to the shed. Unfortunately, just about every puzzle in the game has this level of difficulty. 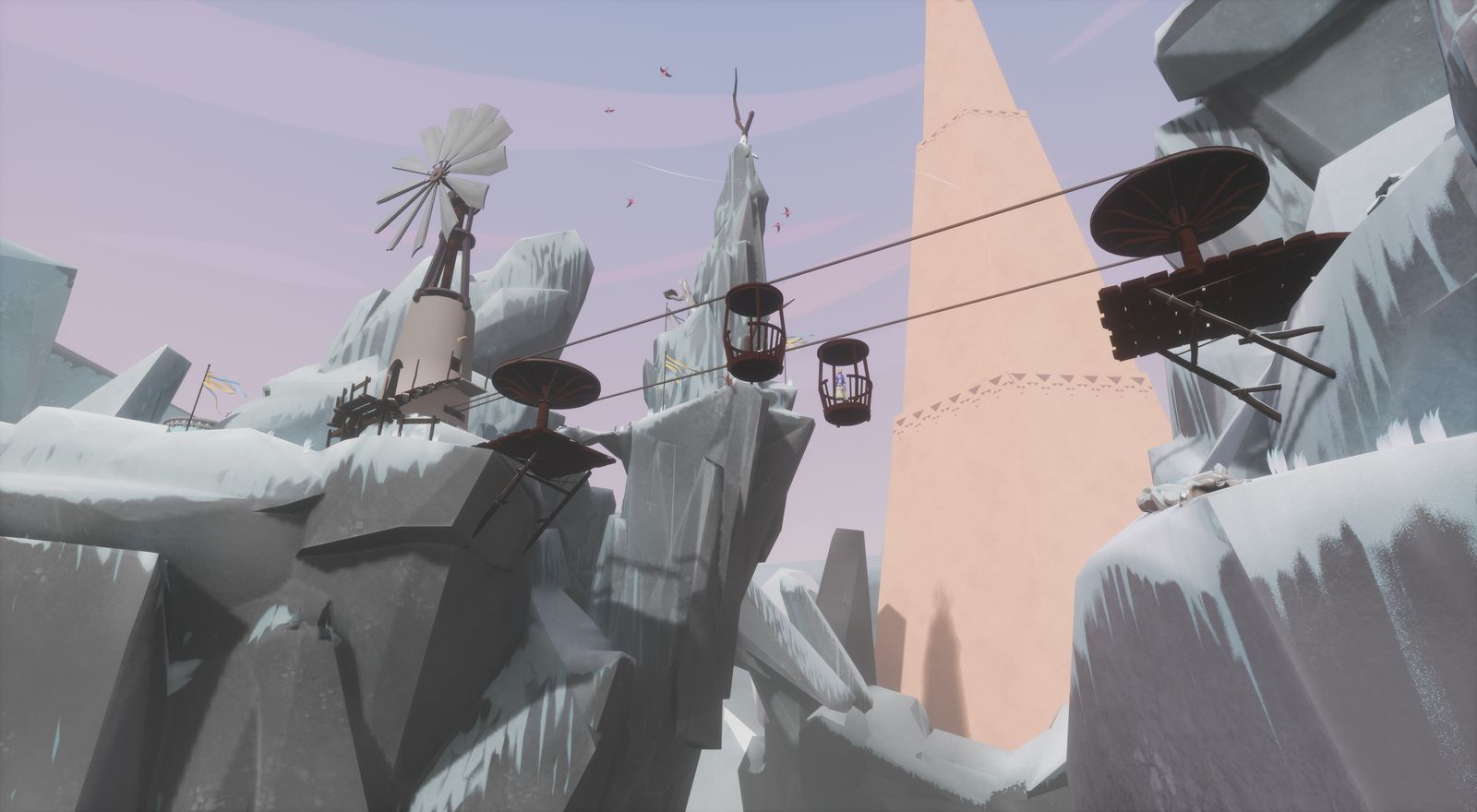 Now I want to finish off this review by talking about some of the other smaller grievances I had with the game. The big one is how I find myself falling through the world in certain parts of the map. Thankfully, it only happened a handful of times throughout the game, but it was irritating (and nauseating) nonetheless. The other issue I had with this game was how sometimes it just gives the player what they need without them unlocking it themselves. At these moments it felt like the developers were rushing to finish the game. This was really noticeable immediately after halfway through the game. There are six masks to unlock, but only the first three you’ll carve out of wood yourself. The other three are immediately given to the player as soon as they reach this halfway point. It’s kind of a bummer since it’s really fun carving these masks yourself, but it feels like the game didn’t want to have you spend any minute longer doing these tasks — instead forcing your attention to the rest of the game (namely, exploring).

Maskmaker feels like it’s going to give you full control over the game, then it takes it away from you and does it for you. The parts it gives you full control over, however, tend to be exceptionally tedious. The crafting system is great when the game wants it to be, and I loved exploring every nook and cranny that the game had to off, but in short, while the game feels like a bedtime story, ultimately it’s just that --- there’s not much lucidity that you’d expect from a VR game, and it feels more like an on-rails experience.

With a deep interest in writing, Ben followed that into a Journalism degree. As an avid lover for gaming, he is constantly expanding his library with console, PC, and VR games. He's obsessed with stealth games and loves hunting down the smallest of details inserted by devs.
Related Articles: Maskmaker, VR
Share
Tweet
Share
Submit