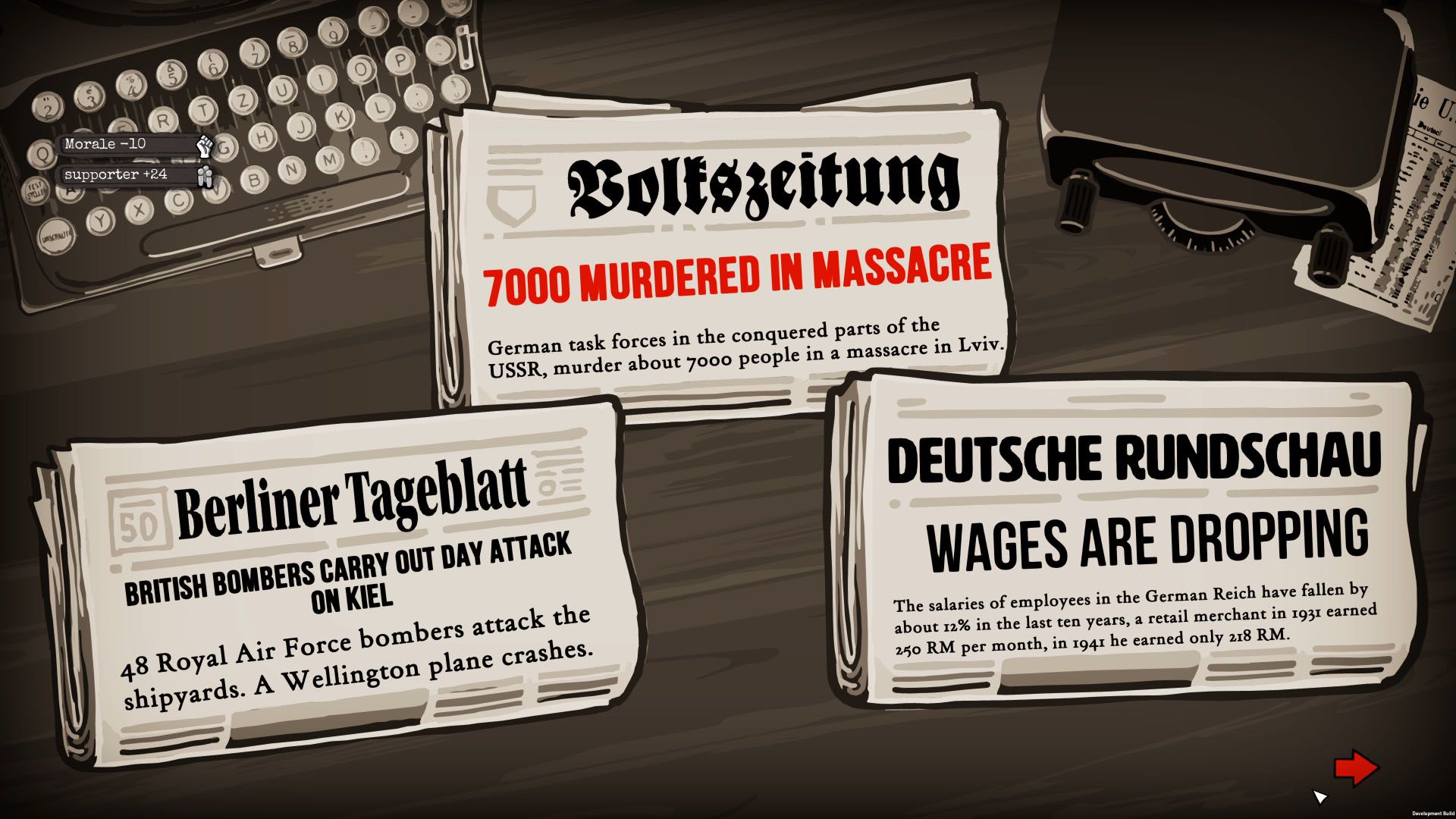 As is known, the Nazi regime and the effects of their rule was a period in human history of pure evil. Released after the war was documentation and imagery showcasing the horror of those seven years, and each of those stories helps the audience recognise how difficult it was to live and be sustained. Through the Darkest of Times goes one step beyond and puts you in the shoes of a small resistance group of German civilians who despise the Nazis, the war that followed, and those who side with the regime. You’re always on the cusp of failure, disbanding the group, or being arrested and killed, and it all depends on the actions you take or fail to take. You wrestle with taking the moral road which might get you killed, or keeping your mouth shut while others suffer. From the get-go, this title makes it abundantly clear that the road ahead will be long, stressful, and exhausting as you attempt to make as much or as little difference as you can in the world.

After generating your character, the game begins the moment Adolf Hitler is appointed Chancellor by President Paul von Hindenberg. You’re immediately tasked with building up a group of no more than five individuals who will assist with the tasks you strategically choose. Task difficulty ranges from easy to extreme, and the level of preparation also determines how likely you are to succeed. An easy task may have you be spotted, and an extreme task may, unfortunately, lead to your member’s demise. These values change depending on the skills and attributes of each member. Skills include an individual’s level of empathy, strength, intellect, ability to be stealthy, and how easy they can convince people. Attributes, however, include a number of factors about a character’s personality. This includes their religious stance, their employment status, and overall attitude. An example of a successful task would be using a Catholic member to speak to a group of other Catholics in order to gain their support. Types of tasks range from asking for money or gaining supporters, to stealing explosives or contacting a foreign source of assistance. 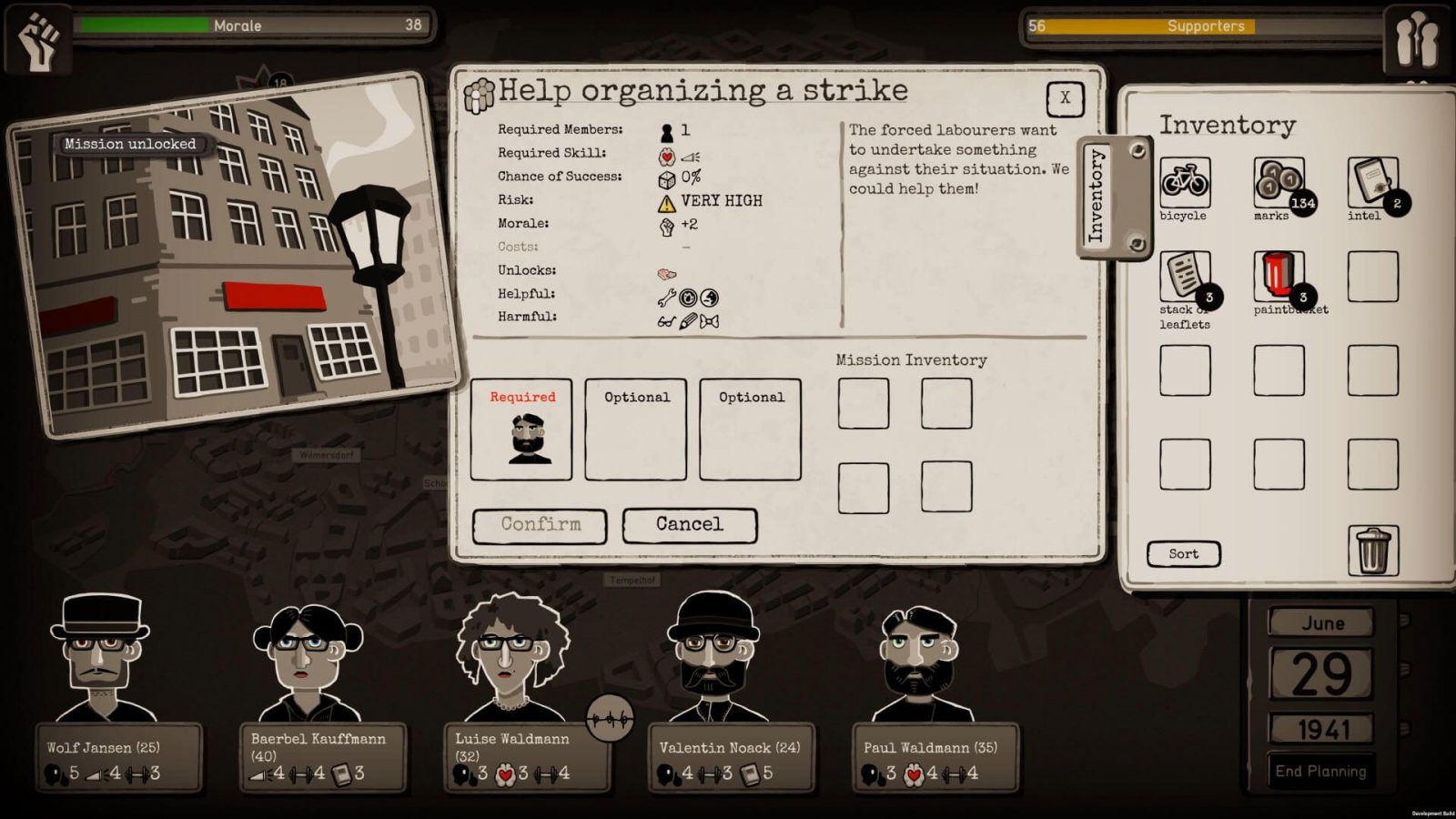 An example of a weekly opportunity

Each action will cost a week to perform, and immediately after executing the tasks you’ll begin running through the results. This will go one of two ways — completely successful or having to make a time-based decision on how to act. The latter requires you to choose to flee, hide, or enforce. Fleeing will immediately cancel the action, hiding is safer but can still fail the action, and enforcing is very dangerous but you’ll more than likely pass the action. Additionally, be it a time-based decision or otherwise, you’ll also have to battle the threat of being seen by witnesses. Each time a member is seen puts them on the radar of the Gestapo, and a notorious member will cause a mission to be more dangerous. Additionally, once the member peaks notoriety they will be arrested. At this point, they may be released or eventually die in prison. That’s a lot to take in, and clearly there’s a lot to do. The title will have you juggle a lot of information as you make your decisions each week. But, be it as it may, the game does a fantastic job settling you into the gameplay mechanics. It’s very accessible, and once you’ve got the hang of how it all works, the story really takes hold.

And with the general gameplay elements out of the way, the part that sells the game is its detailed narrative. Paintbucket Games has done a fantastic job in immersing the player into the world of Nazi Germany, and they aren’t skipping out on any of the details. You’ll be doing a lot of reading, and I mean a lot of reading. Occasionally the story may repeat itself, such as when heading to a bar with your members to boost morale, as it uses the same narrative each time you visit. But, that occurs rarely, and only for those less-than-important moments. Each day you’ll read either news headlines or play and read through a moment in your PC’s life, and each story delivered will be more cold and gut-wrenching than the last. 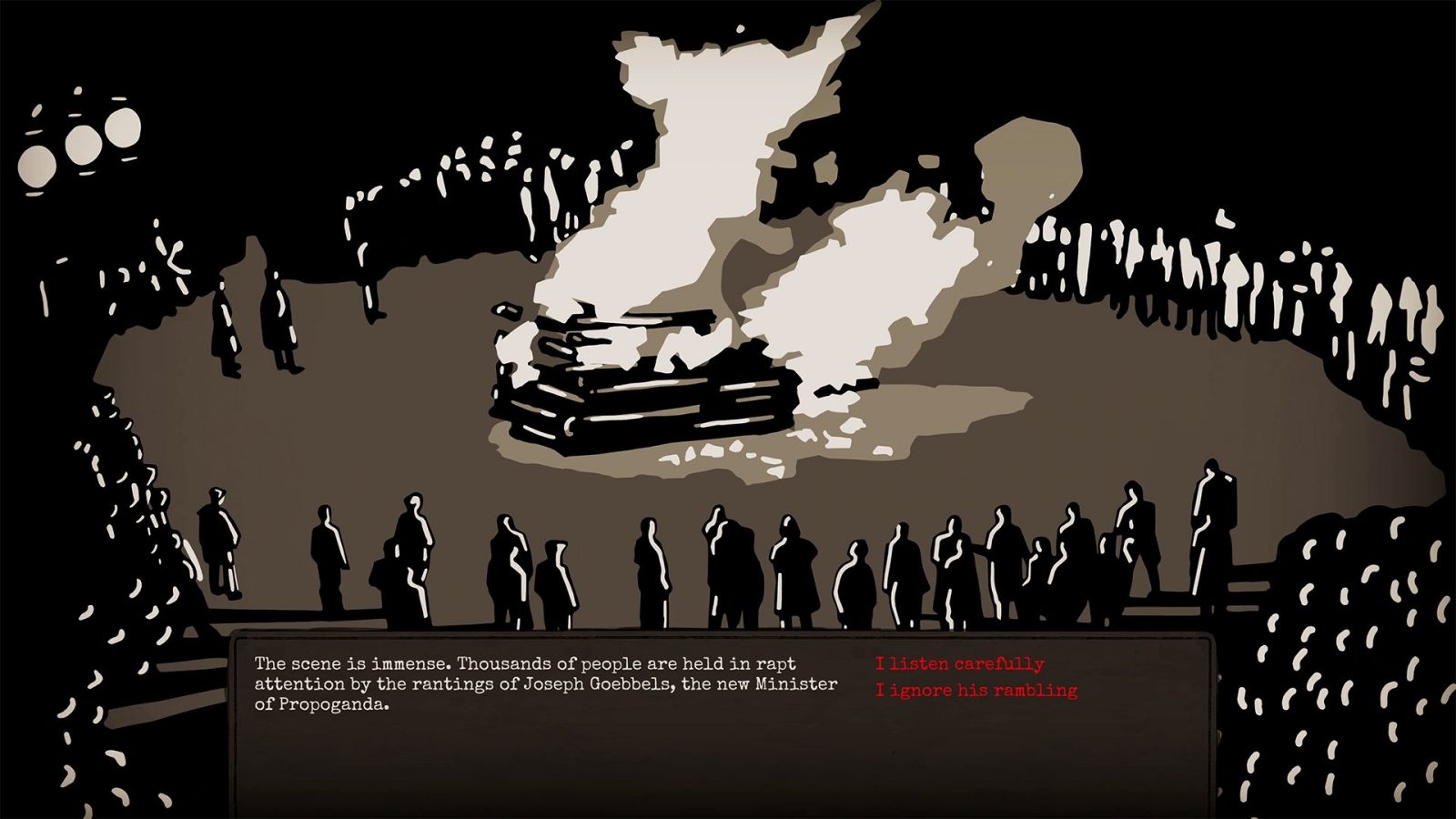 A different way of retelling history

The developers have done a great job showcasing what it’s like living in Nazi Germany from its beginning to its end, and they definitely don’t skim out on any details. The news will always be terrible, and there’ll be a mini story between each day where you have to make a difficult choice. The delivery of the story in those moments is what sells the title, as those choices will shape the lives of people around you and you have to balance doing what’s right with accomplishing the greater good. An example of this was having the choice of helping a Jewish family by sheltering them in a German-only bunker to save them from the airstrikes overhead, or refusing to take them in so that pro-Nazi Germans wouldn’t report you to the Gestapo. Ultimately, you’ll be stressed and mentally exhausted with each choice you have to make as the narrative doesn’t miss a beat in making you feel that way.

All this being said, the story really hits a certain way on the first playthrough, and not so much on the second. A second playthrough will have you notice that each plot point was crafted to showcase the horrors of that period, and that your actions really don’t make much difference to the overall story. Even on the first, you’ll notice how little your actions ultimately make in the world once you reach the final couple chapters. And for the available major attacks on Nazi Germany, it’s too difficult to reach them in the first place since you’ll have to battle avoiding sending your members to their demise and the limited amount of resources available to get there. At any point things can, and will, go wrong, and you’ll have to pray that RNG is in your favour with each dangerous action taken. However, it may just be the devs showcasing that each action, be it big or small, is still an important action to take as the lives of the few are just as important as the lives of many. So, if you’re going in there hoping to go from zero to hero and save the lives of millions, I’ll save you the time — it isn’t that kind of title, and you won’t accomplish anything that will ultimately change the course of history.

Through the Darkest of Times

Not many games have you play the underdog from beginning to end. It’s tense, and each passing day keeps you on edge. You’ll be emotionally invested in trying to keep your members, friends, family, and even strangers safe as you make choices that will shape your life and their future. Although a second playthrough doesn’t hit the same way emotionally as the first, it’s still a fantastic title to understand the heart-wrenching reality of that period.

With a deep interest in writing, Ben followed that into a Journalism degree. As an avid lover for gaming, he is constantly expanding his library with console, PC, and VR games. He's obsessed with stealth games and loves hunting down the smallest of details inserted by devs.
Related Articles: Indies, Through the Darkest of Times
Share
Tweet
Share
Submit