Video games come in all shapes and sizes, from action-packed first-person shooters to complex puzzle games to relaxing story-based “walking simulators” and more. There’s something for everyone, no matter what your preference is. Now, what if I told you about a game where you play as a mystical wolf exploring the woods and seeing ghostly visions of people’s lives? Sounds odd yet fascinating, doesn’t it? That premise is why I jumped at Paws and Soul, and it turned out to be more than I was expecting. For better and for worse, this game surprised me.

As I said before, Paws and Soul puts you into the shoes (or should I say paws), of a mysterious wolf. You awake in the forest and are immediately left to explore. There’s not much to see at first, so the only way to go is forward. It isn’t long before you enter a wide open area composed of grass, trees, caves, mountains, and a lake. The sky is a beautiful blue, and the air is filled with the calm sounds of nature and the serene tune of ambient music. This place feels untouched by man, and that’s just the way I like it.

Early on, you’ll notice orange orbs scattered around. You can pick these up and collect them to use later. These orbs are a form of spirit energy that you can use at spirit altars throughout the game. It won’t be long before you find your first altar since it’s in the middle of the path you must take to progress, but they aren’t all that easy to find; some of them require exploring. I didn’t realize this until the end of the game when I was informed which ones I missed. 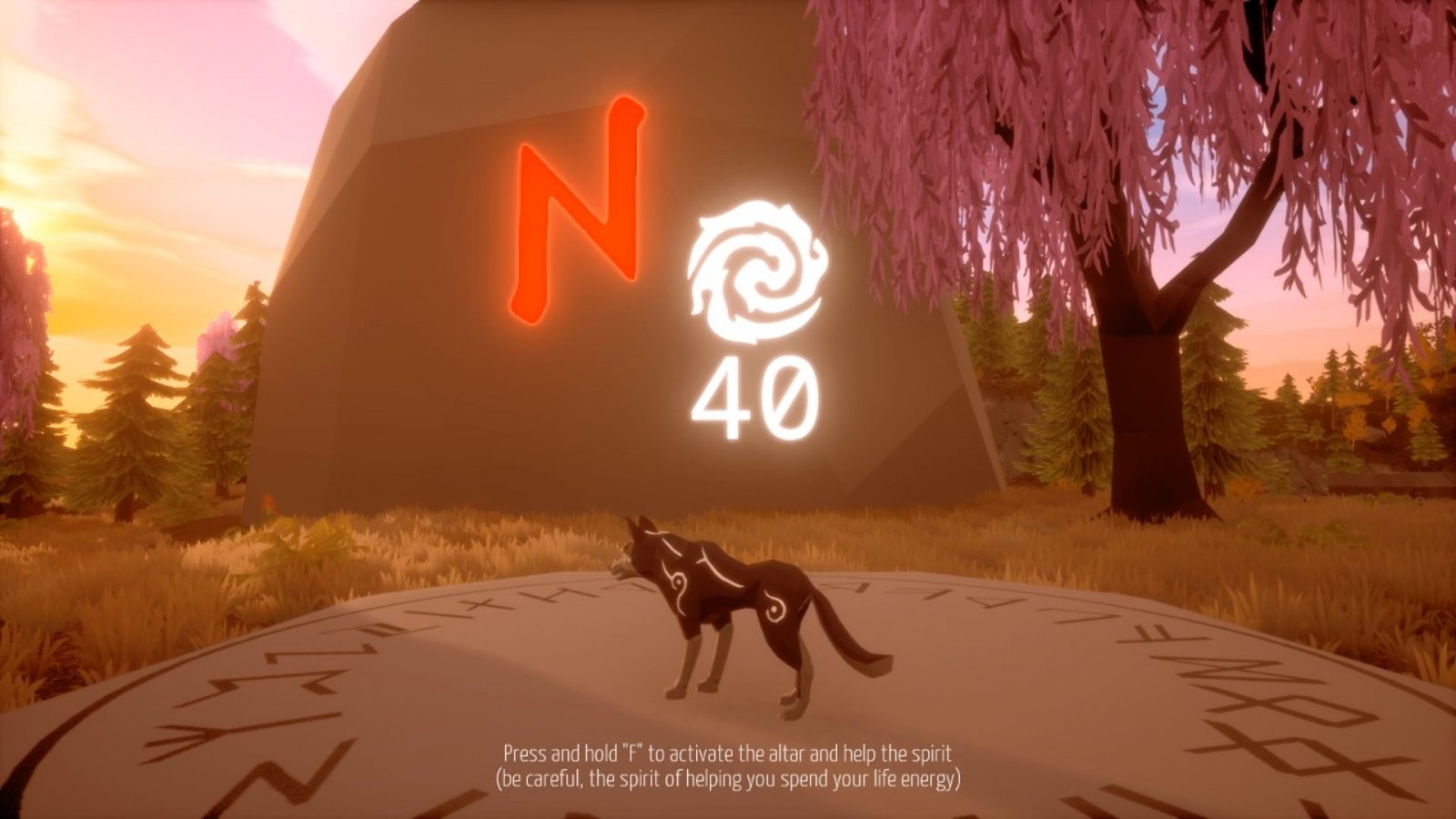 The spirit altars show you events in the life of a girl named Michelle, and each event has a problem associated with it. Each altar has a number above it, and after watching the scene play out, you can choose to stand on the altar and spend the designated number of spirit orbs to help out. This is the main reason to collect orb, to help this girl out. I’ll be honest, I’m not entirely sure what she has to do with the main story (which I’ll get to soon), but my best guess is that there are some parallels to Michelle’s life and the lives of the main family you learn about along the way. I may have missed something, but from my experience it felt like an extra bit of unconnected story. It wasn’t bad by any means, just confusing.

As for the main story, as you progress through the world you’ll see ghostly visions of a family and various events throughout their lives. You’ll see John, the father, Mary, the mother, and David, their son. Without spoiling anything, the earliest memories are when David is first born, and then later on you get to see him grow up and experience a lot in life. The story has its ups and downs, both in terms of being interesting and in terms of emotional tone. Again, I won’t say specifics since the story is best experienced on your own, but just know that the story gets sad at times. I did have some moments where my heart started to hurt, so take that for what you will.

While exploring the world and taking in the scenery as the wolf is relaxing and peaceful, the story is what kept me moving forward. I wanted to learn about what happened next and why this wolf was seeing these visions. Oh, did I mention that the wolf can talk? Yeah, he has a manly voice perfect for narration, and it’s clear that they chose his voice actor for that very reason. After each event is done, the wolf comments on the situation and expresses his opinions and feelings on the matter. As time goes on, he starts noticing that he must be connected to this family somehow since he continues to see visions of them. It’s clear to the player as well, but the specifics are what we’re after. 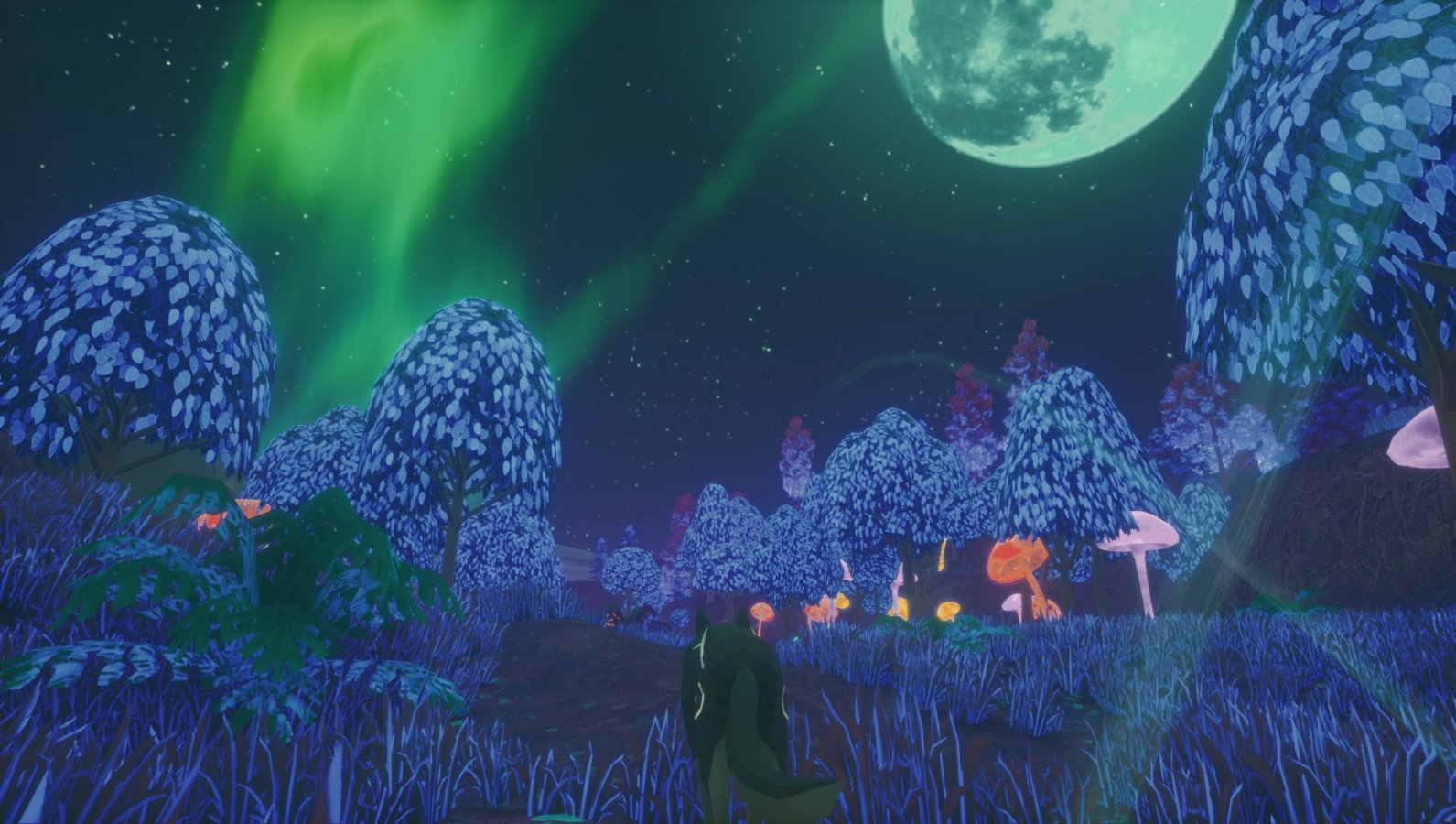 On the topic of talking, this is one of my few issues with the game. The dialogue is odd and unrealistic far too often. I forgive the wolf since he has the air of a wise old figure who is overseeing these events and talking to himself, but the ghostly visions are a different story. These are supposed to be people talking to each other in their everyday lives, but I don’t buy it. Sure, it isn’t always bad; there are plenty of times where conversations sound okay, or at the very least human. It’s that 50% or so of the time that it feels like an A.I. wrote the dialogue without being given much direction. These people tend to be overly polite and make some odd word choices. It didn’t ruin the story, but it definitely pulled me out of it quite a few times.

Some of the other features of the game include a few “puzzles” that you can solve, but they tend to just open a path for more spirit orbs. They’re a nice little distraction, but they don’t take much effort to complete. There are also magical butterflies that you’ll encounter along the way, with each color giving you a different ability for 30 seconds. The red butterfly allows you to jump much higher, the blue butterfly lets you see through fake obstacles, and the yellow butterfly gives you a speed boost. The butterfly disappears when you grab it and gain the ability, but it respawns after 30 seconds, so you have unlimited tries for whatever you’re trying to accomplish with it. 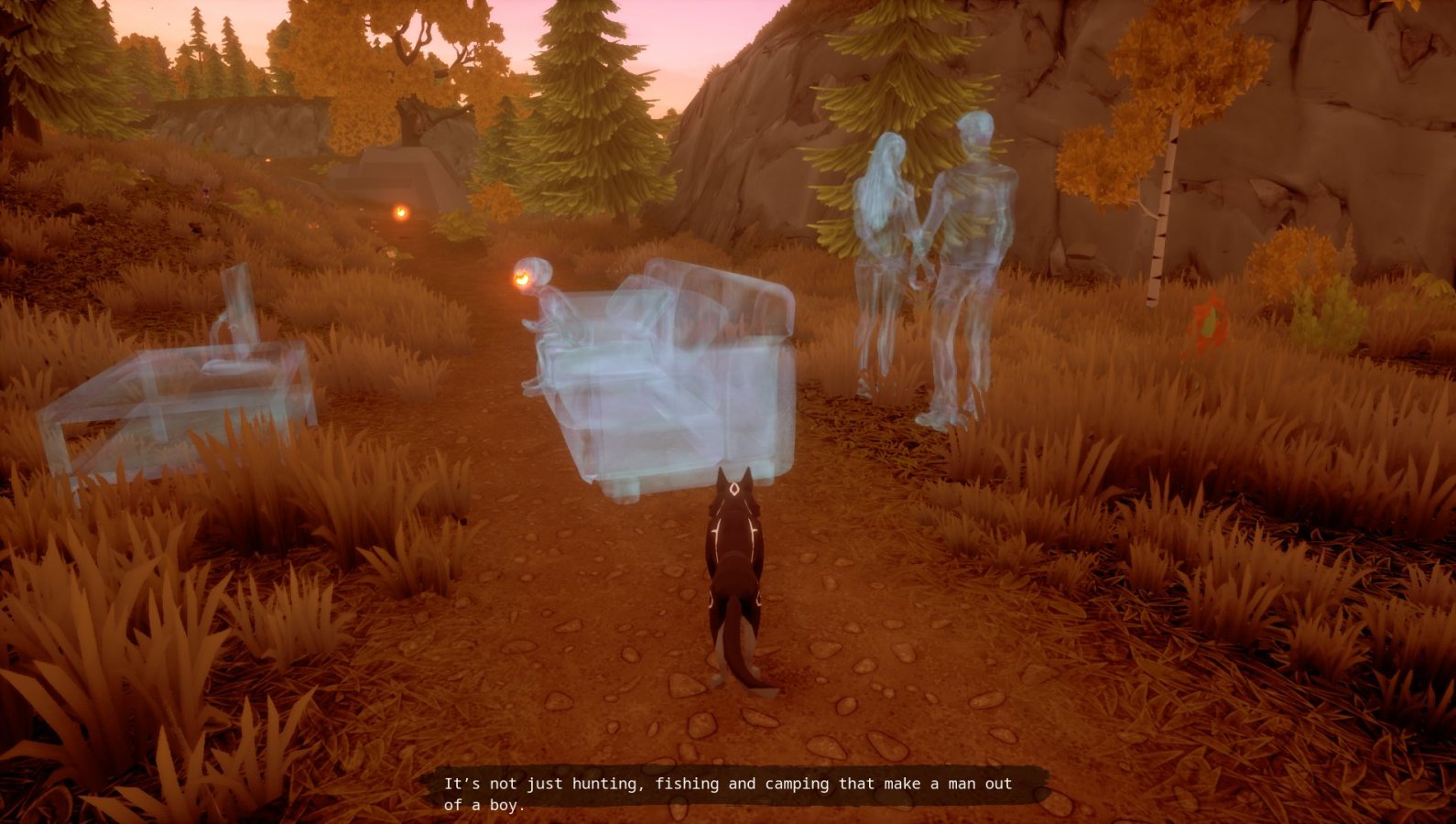 Overall, I’d say that Paws and Soul was a relaxing adventure through nature with plenty of enlightening experiences along the way. The gameplay does get a bit repetitive since there’s not a lot going on, but excitement isn’t what this game is about; it’s about the journey and learning about life. The dialogue leaves a lot to be desired, but the story was still told well enough to keep me playing. I only had a few technical issues while playing, such as the game slowing down and having framerate issues when in some of the caves, but the developers stated ahead of time that they know about the issues and are working on fixing them. That being said, they didn’t happen that frequently, so it hopefully shouldn’t take long to fix. All in all, I’ve seen the paws on my character and the soul in the story, so who’s ready to wander into the woods?

Paws and Soul is a peaceful journey through the woods, filled with orb collecting and ghostly visions. You'll learn about David and his family along the way, and further exploration lets you learn about Michelle as well. The dialogue feels unrealistic and the gameplay can be repetitive, but the story keeps you going.

Codi loves to play video games and watch movies. He will watch almost any kind of movie just to experience them. His ideas take inspiration from the shows and movies he watches, and games he plays. He also loves a good pun.
Related Articles: Paws and Soul
Share
Tweet
Share
Submit