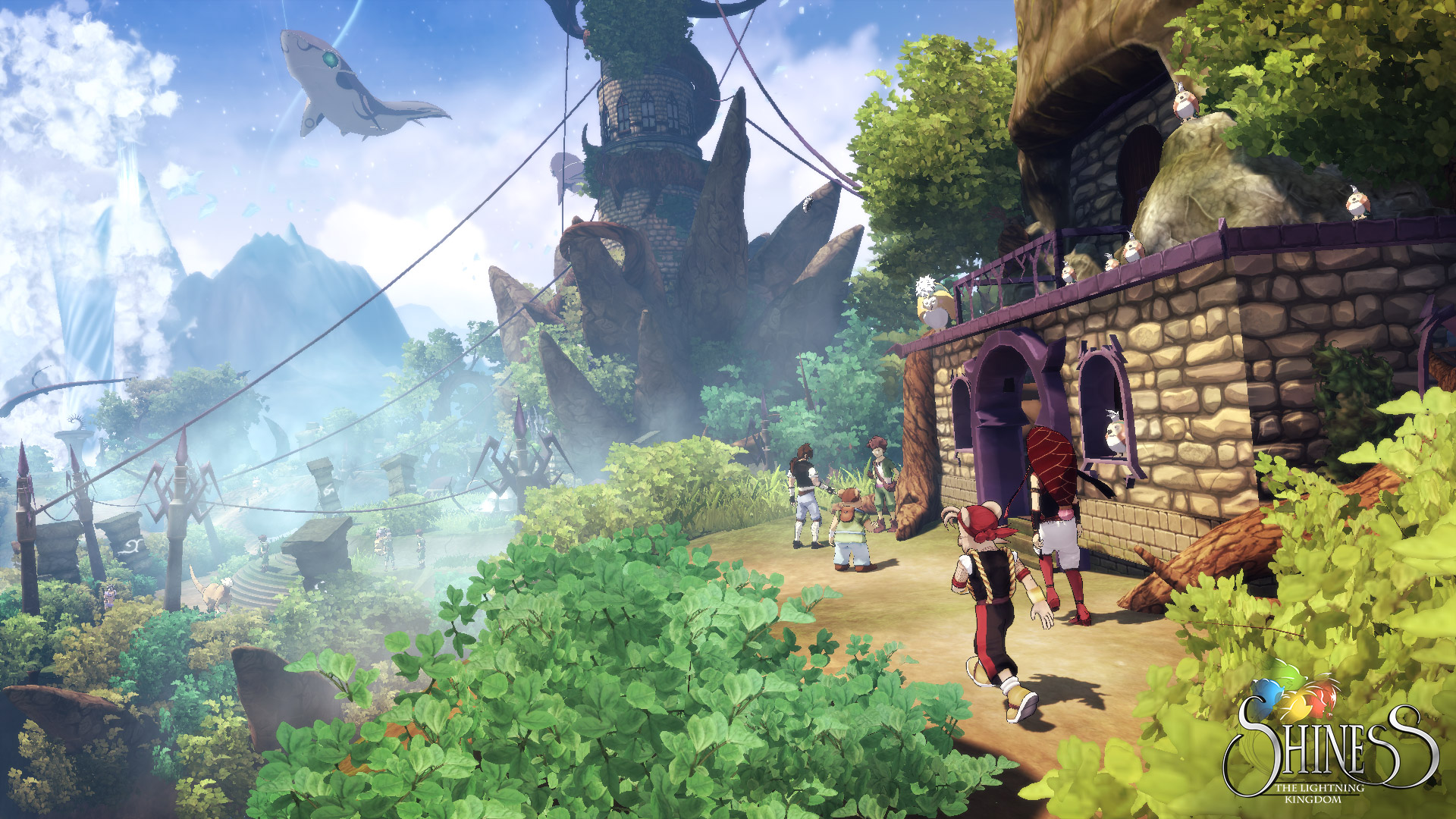 It’s not a good sign when the idea of picking up a controller to play a video game is accompanied by a groan of discontent. I’ll be blunt. I did not enjoy my time with Shiness: The Lightning Kingdom. The map design is convoluted and frustrating to navigate. The combat system is complicated and clunky. And the story and characters are long winded and uninteresting. But I’m getting ahead of myself, let’s roll it back a bit. Enigami is an independent French studio that took on the ambitious prospect of creating a full-fledged action-RPG. They get points for trying, but that’s basically it. I find myself in a weird and, truthfully, unexplored position in feeling sorry about reviewing a game that I disliked so vehemently. I know actual people worked hard on this game, so I feel for all of the time and effort they put forth. But I also know I shouldn’t have to apologize for my opinion. With all the cards on the table, here we go.

You play as a Waki named Chado (pronounced Shadow–and don’t ask me what a Waki is). Chado and his tubby sidekick Poky crash land on a mysterious world where they meet up with other characters that eventually join your party. You and your party then go on a multi-world adventure where you’re trying to rescue a mystical being called Terra. The story is serviceable, but not anything worth remembering. There is a 139-page manga that was written and illustrated to go along with the game, so someone put in the work. Again, points for trying, but nothing about these characters was engaging enough to keep my attention, or at least distract me from the other, more glaring, missteps in the game. I haven’t read it, but the manga might actually be the best way to experience the world of Shiness, and here’s why.

The in-game art is uneven. The concept is a blend of painterly and manga-inspired aesthetics draped over a 3D space. The issue I have is in the execution of the drapery. It looks as if art rendered in 2D was plastered onto 3D geometry resulting in a rudimentary and dated graphical style. If the goal was to capture the feel of PS2-era RPGs, they sure nailed it with the look. I can see the core of what they were going for could’ve been beautiful, and there are flashes of that beauty, but it feels like that artistic vision fell through during application.

The map design is some of the worst I’ve ever seen. First tip: don’t look at your mini map. It’s useless. A series of crudely drawn pathways give zero indication as to whether you’re looking at a bridge, a tunnel, a dead-end. I spent hours roaming around aimlessly, circling back on myself, missing obtusely-hidden pathways just trying to reach main quest points. Exploring? Forget it. There are small streams you can’t cross, short cliffs and small rock formations you can or can’t jump up or drop down from, with not much indication to differentiate the two. The various “open spaces” are inconsistent, and oddly and obtrusively restrictive.

While you run around literally lost in these worlds, you can solve puzzles, battle enemies and complete side quests. The side quests are mostly fetch quests that are tedious and uninventive. The good thing about them is that you don’t have to do them. Each party member has a unique power used to solve puzzles. Chado summons a large rock that he can place onto weight-triggered switch-plates, while Poky pulls out a wrench that connects different colored terminals with beams of light. All of the puzzles are simple and old-fashioned, and it feels like they should’ve been left out altogether. The combat, on the other hand, is not simple. But its complexity and potential are hampered by how unresponsive and unforgiving it is.

Battles begin by running into enemies populating the open maps. If you’re close, they’ll chase you down. Avoiding them is next to impossible. I did everything I could to avoid unnecessary combat, but the enemies were relentless in their pursuit. Also, they repopulate the world almost instantly. Several times I would complete a battle sequence, turn a corner, realize I’m going the wrong way (remember the terrible map? I sure didn’t), and turn back to find the enemy I just beat patrolling the same area again. It’s a terrible mechanic. Once engaged in combat, you’re locked in an arena. But it’s okay, you have your party, right? You can switch between party members, but your battles are one on one, and only three party members can go into an arena at once. When you or your enemy dies, the next in line jumps into the arena. Your party members offer some buffs while you’re engaged in combat, but it’s an awkward system that feels limiting.

During these fights you have a series of punches, kicks, dodges, parries and spells at your disposal. They can be used in a variety of ways to create combos and counters to defeat your enemies. Unfortunately, my experience was marred with an unresponsive control system. The parry had a delay. The dodge was inconsistent. The spell system was metered and relied on channeling power from the arena, which was slow and awkward. Every fight was overwhelming and all the tools I was given were either incomplete or broken.

Now for the final kick in the teeth: the camera. I’m pretty sure it had a mind of its own and was determined to make my life miserable. For starters, it had an odd sense of heft to it. It takes a second to get going after you push the right analog stick, and it carries momentum after you let go. Changing direction quickly is not something you can do. It reminds me a bit like driving a car without power steering. But many times, mostly during combat, the camera decided it was going to take control for itself. If an enemy fell off a ledge, the camera would follow and start violently shaking until I quit out and restarted. Other times, the enemy would back into a corner and not allow me to turn out of an awkward angle with the enemy in the foreground blocking me from seeing what I was doing. There is no lock-on camera, which led to some terrible viewing angles that resulted in my death countless times.

Shiness: The Lightning Kingdom is the product of a small team trying to do too much and, ultimately, falling flat. It pains me to say it, because I saw the potential in Shiness way back when it was a fledgling Kickstarter upstart, but this is one of the worst gaming experiences I’ve had in a long time and I cannot recommend it to anyone that likes fun.

On December 5, 1986, Josh was born into this world pink-faced and squalling. His only thoughts were, "WHAT IS GOING ON? WHO ARE ALL OF THESE PEOPLE? AND WHY THE HELL AM I NAKED?" 19 years later he bought an Xbox 360 and now plays and writes about video games. Life is funny that way.
Related Articles: Shiness: The Lightning Kingdom
Share
Tweet
Share
Submit