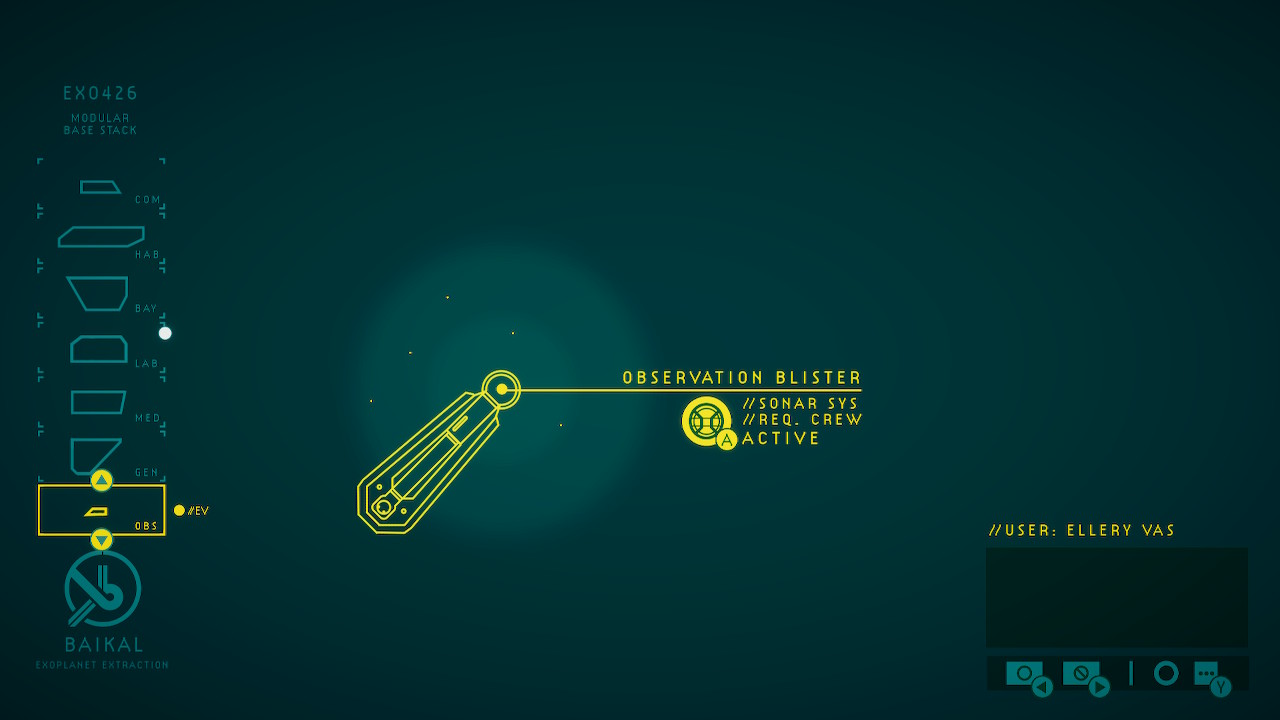 I don’t think I’ve ever played a game that has physically affected me until In Other Waters. As I dove deeper and deeper into the alien oceans, I found it harder and harder to breathe because the game’s soundscape is so immersive. It actually felt like I was underwater with a limited supply of oxygen, and it does this with minimalist visuals, well written text, and an incredible array of sounds and music.

In Other Waters sees you inside the diving suit of xenobiologist Ellery Vas as a mysterious AI that has seemingly just come into consciousness. You’ll have to work together, with Ellery serving as your eyes while you control her suit. It’s an interesting dynamic that lends itself well to the text adventure style of the game. As an AI, you can only see the topographical data surrounding you, and scanning areas, objects, and creatures will have Ellery describe them to you. I’ve missed this specific type of narrative game, and it’s nice to see it return in such a clever and more accessible way; there’s no text parser to be found here, just pointing and clicking. I don’t want to spoil the narrative any further than I already have, but rest assured that, while it takes its time to get going, it’s a good read with a powerful message that we desperately need. There’s also a new kind of horror I haven’t seen explored much in narratives yet that’s a bit closer to home than cosmic horror, if you catch my drift. If I have two complaints about the story it’s that I feel like I didn’t get to know Ellery all that well, aside from the fact that she might be a lesbian, and the yes or no responses you have while interacting with her feel too restrictive. Text when talking with her also progresses automatically, which caused me to miss some dialogue once or twice and didn’t feel like a meaningful mechanic. 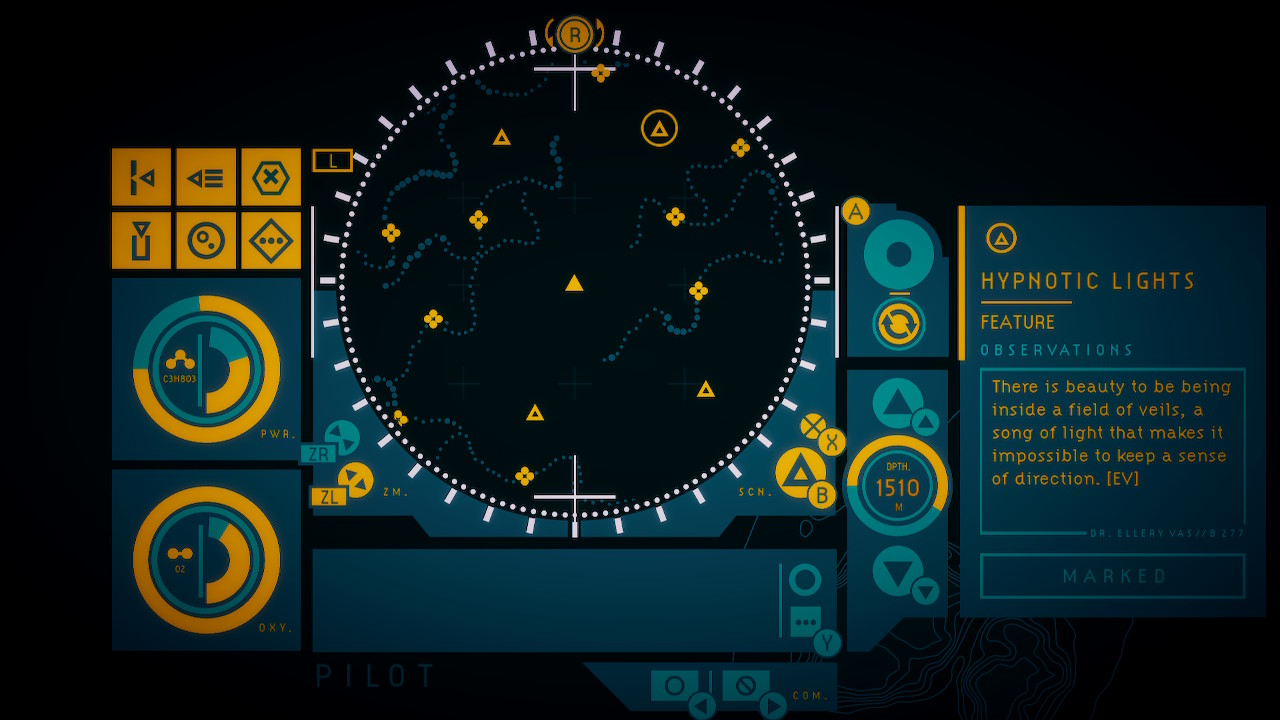 At first, I found In Other Waters’ method of control using the joycons to be cumbersome, and opted for the touchscreen. As I grew more accustomed with the game’s systems of exploration and interaction, the complex analogue and button controls added to the immersion of controlling such a complex piece of machinery such as the diving suit. Using the left sick, you can target areas to move to then press the A button to propel yourself in that direction, though you will need an unobstructed straight line between you and your destination. To scan the surrounding area to find new points of interest to move to or marine life to discover and sample you press the B button, then use the right stick to scan things you want Ellery to describe to you. It may seem overwhelming at first, and it is, but it helps sell the feeling of deep sea exploration while making you want to take in each small bit of dialogue as you move along. Unfortunately this system does fumble in one of the game’s locations called The Bloom. In The Bloom, your oxygen is constantly draining so if you stop to read even one of the descriptions your O2 will be half gone by the time you’re done. It’s unfortunate because the writing is very good and I want to know more about this dangerous place, but wanting to survive makes that impossible.

Along with an oxygen meter you’ll need to monitor to keep your companion breathing, you’ll also have to keep an eye on the energy of the diving suit. Every time you propel yourself to another location or perform other actions, you’ll use up energy. You can stop by the few and far between stations to replenish your resources, or you can use up samples you take for scientific analysis to restore a portion of your oxygen or energy reserves. Of course, you won’t be able to analyze them when you get back to base, so you’ll have to determine which samples you can sacrifice and which you want to keep. You have a very limited inventory to store samples too, just to make things that much more stressful. Upon returning to base, you can store and analyze your samples to learn more about the alien world you find yourselves on. The base offers a respite from the dangerous waters outside where you can read Ellery’s journal, plan your next dive, or just chill out to the relaxing synth-wave music. It’s a breath of fresh air (pun intended) to return here after some of the more stressful dives. 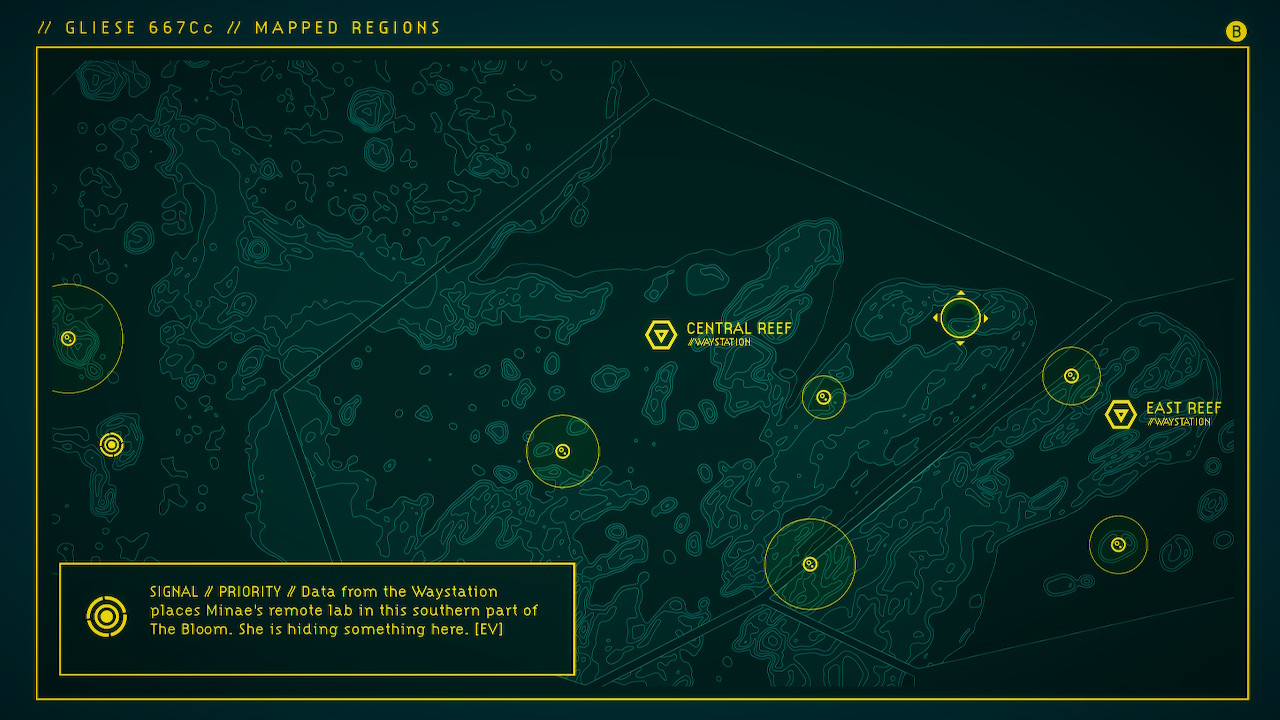 I’ve already praised the game’s immersive sounds and musical score, but the UI is equally excellent. The game only uses a few colors at a time, mainly various shades of blue, yellow, and white depending on where you are on the seafloor. It does some very cool things with the visuals as well, though, without spoiling anything, it can be difficult to look at for long stretches of time. The game is very short too; I finished the main story in just under five hours, but there are a few things you can go back and do like collecting all the samples to fill out your database. While I felt like the story was only as long as it needed to be, there were some things I wish were more fleshed out like a certain… thing you can find in the medical bay and some more maze-like areas to explore with careful decision making on exactly which paths to take to avoid dangerous plant life. The game could also use a tutorial of some kind, as it took me a few minutes to figure out how to move and half the game to learn how to move samples using a controller. Strangely, even though the game is entirely 2D, I encountered almost constant frame rate dips and stutters. The game will chug along in some of the larger areas and hitch slightly upon loading every single line of text. I don’t see how this game could be taking on the Switch’s hardware in any way, so I’ll chalk that up to poor optimization.

In Other Waters’ best quality is just that: it makes you feel like you’re in other waters. It’s a well written exploration game that, while short, provides an interesting story. If this is the form the classic text adventure returns in, In Other Waters leads the charge with its immersive soundscape and imagination sparking descriptions.

David is the kind of person to wear his heart on his sleeve. He can find positives in anything, like this is a person who loved Star Fox Zero to death. You’ll see him playing all kinds of games: AAAs, Indies, game jam games, games of all genres, and writing about them! Here. On this website. When not writing or playing games, you can find David making music, games, or enjoying a good book. David’s favorite games include NieR: Automata, Mother 3, and Gravity Rush.
Related Articles: In Other Waters, Indies
Share
Tweet
Share
Submit