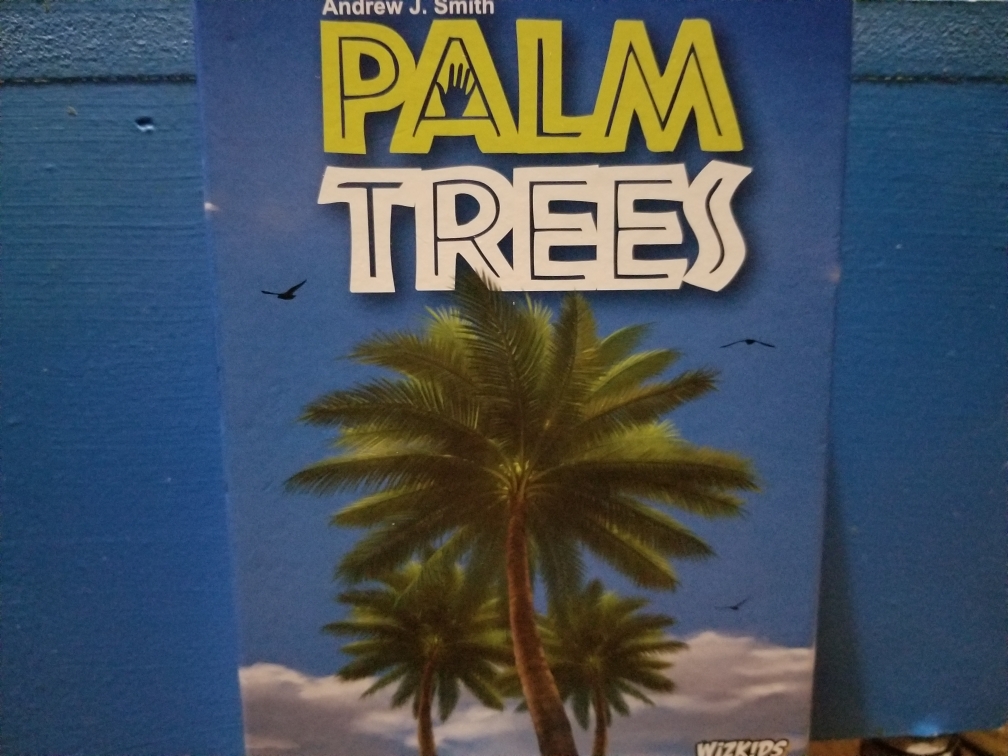 Two of the biggest things that can turn people off a tabletop game are complicated rules and lengthy setup time. You don’t want to spend more time looking at the rulebook than actually playing the game because at that point you’re basically just reading. You also don’t want preparing to play the game to take longer than the game itself because it doesn’t feel as satisfying. Well, the makers of Palm Trees have alleviated those concerns with a compact game that you can play on a small table and with one hand.

Palm Trees is a game where the goal is to create palm trees by holding cards in one hand. You can play the game with two to six players, and each number of players has a different number of cards that you keep in the deck. The more players you have, the more cards are kept in the deck. This is mostly because the game ends when either all of the cards from the deck are being held or when someone drops one of their cards. 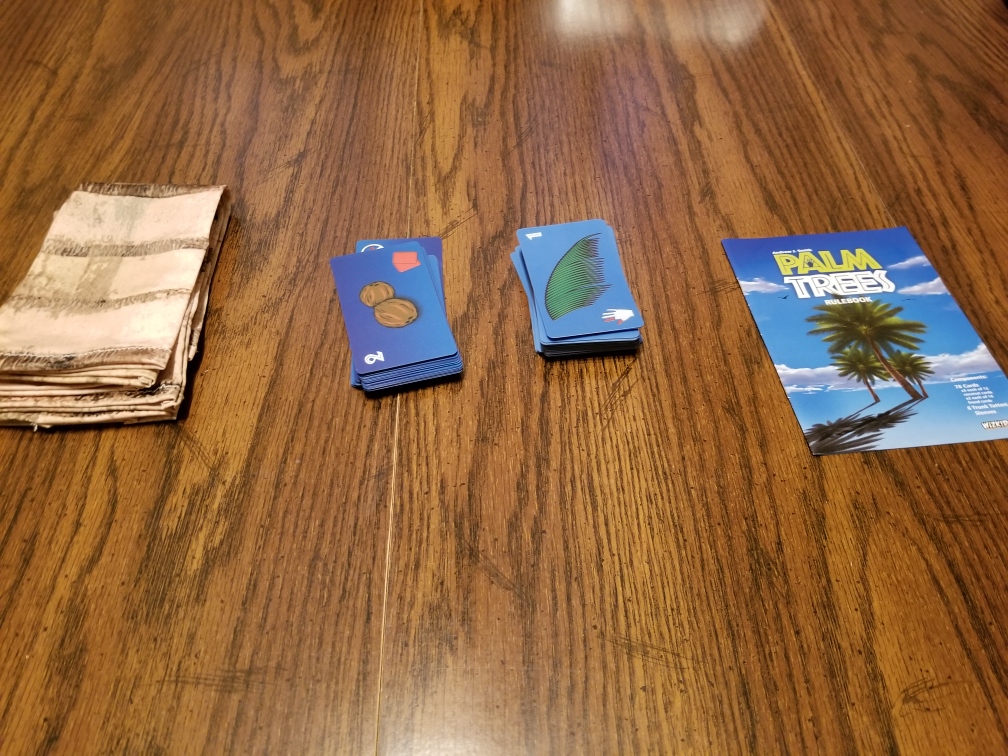 You may wonder why someone might drop their card, and that’s because each card has a picture designating how that card must be held. For example, if the index finger and thumb are red on the hand in the corner of the card, then you must hold that card with only those parts of your hand. There are plenty of variations, including only using your middle and pinky fingers, your palm and your thumb, holding the card by the opposite corners with any two fingers, and much more. Thankfully the rulebook has a guide on the back of it that shows every variation of the holding rules. This helps immensely as it prevents you from having to flip through a book to find your answers.

After setting up the deck as instructed (with frond cards on top and coconut cards on the bottom), you’ll draw two cards and set them to the side of the deck. All players choose which hand they’ll be using as their tree and place that elbow on the table. They aren’t allowed to lift their arm the rest of the game. This is meant to further simulate the tree being grown, but the problem is that your arm can get tired easily when leaving it up like that. Whoever starts the game chooses one of those three cards and designates which other player must attempt to hold it. You then replace the chosen card with one from the top of the deck. The chosen player uses their free hand to place the card into their playing hand and once the card is in your playing hand, you can only adjust it by using that hand. You can’t touch those cards with your free hand anymore. This gets harder as you add more cards to your hand, which is the point, but it also leads to the biggest issue with the game: hand cramps. Being forced to maneuver your fingers into potentially uncomfortable positions just to hold the cards can start to take a toll on your fingers. Honestly, it wasn’t long into the first game before both of our fingers started cramping up. It’s no fun playing a game when you’re starting to hurt. 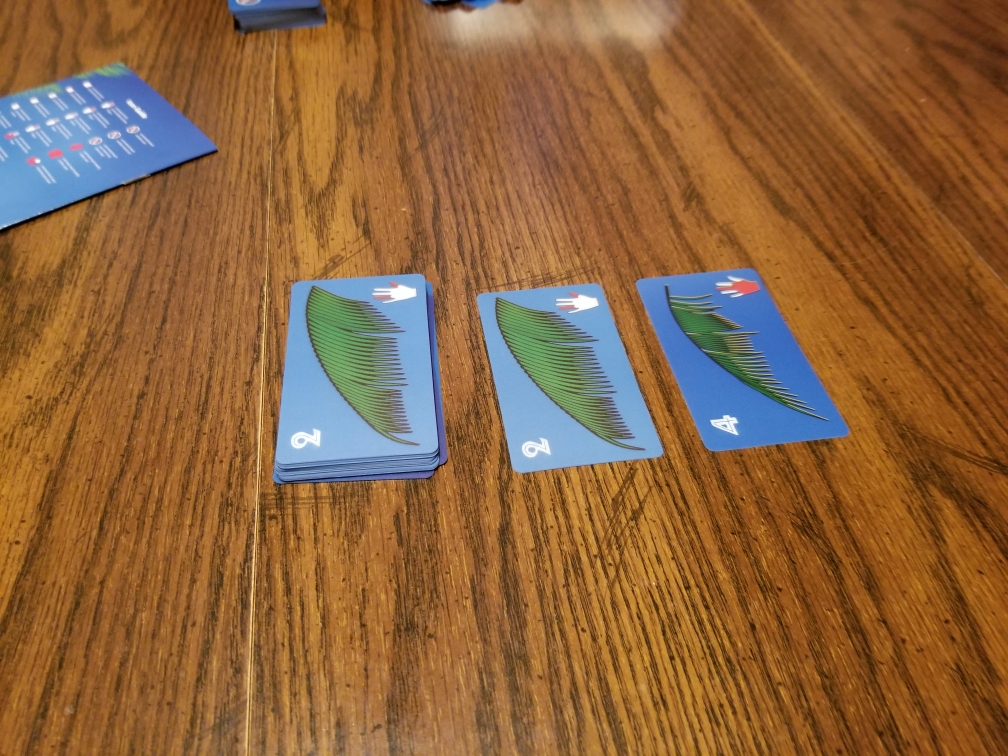 As previously mentioned, the game ends when all of the cards in the deck are being held or one player drops a card. When either of these situations occurs, then all players add up the numbers located in the corner of every card they’re holding. The exception is the player that dropped a card; they unfortunately get a zero as their score. It’s pretty harsh, but it’s more of an incentive not to drop any cards. Whichever player has the highest total is the winner. Different cards have different scores, with harder to hold positions rewarding you with more points. Pretty straightforward and easy to understand.

If you want, you can also play the game in teams of two if you have enough people. In a team game, you designate one player as the tree and the other as the card placer, and the win condition changes, awarding victory to whoever holds six cards first. You can stick with the highest score win condition, but the six cards alternative is mentioned in the book for team play. 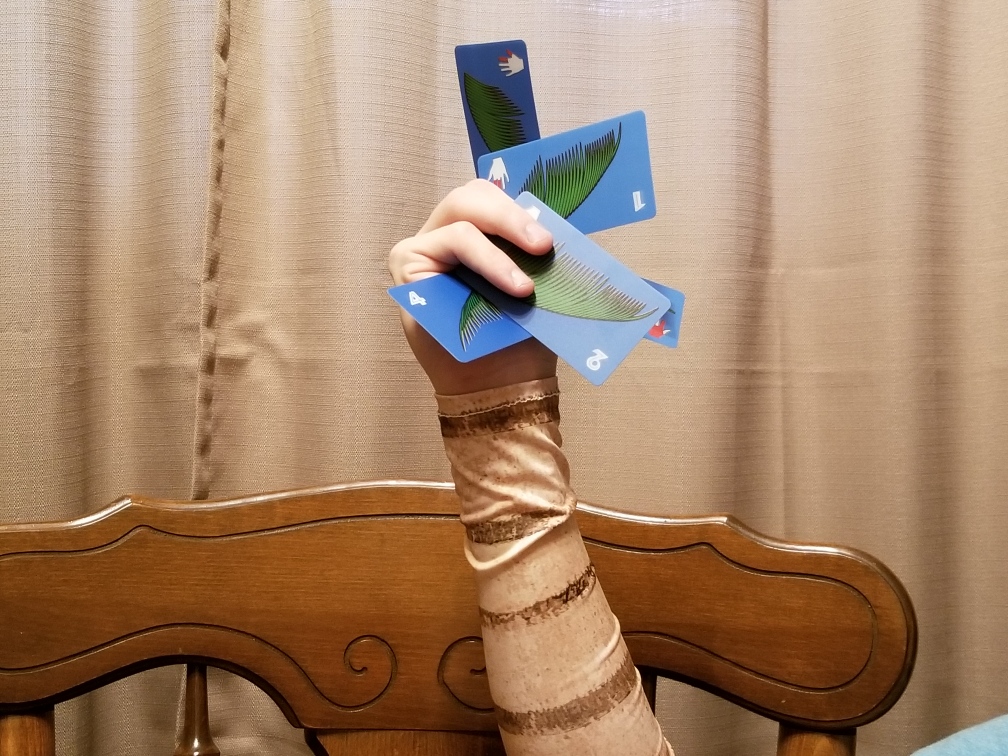 One neat thing included in the box is a set of six tree trunk sleeves that you can wear to look the part. They can be a bit too snug for anyone with bigger or thicker arms, and as someone with thinner arms, I have to say that they still left some indented marks on my arm after I took it off. It didn’t hurt me, nor did the marks, but it’s important to point out that you may see some lines on your arm after you’ve worn one of the sleeves. Not wearing the sleeve doesn’t hinder the gameplay in any way, it’s just for the sake of the palm tree theme. That being said, Palms Trees is a neat little card game that takes practically no time to set up and games don’t last long at all. You’ll have to deal with potential hand cramping and your arm falling asleep, but for some people that may be worth it. I’d recommend only playing a few games at a time to give your hands a break. It isn’t a must have game, but it might be better for those more dexterous in the finger department.

Palms Trees is a neat little card game where victory is literally in the palm of your hands. The idea of holding cards in particular ways in order to create makeshift palm trees is unique, but the potential of hand cramping can dampen the experience. Fingers cramping up and hurting is no fun, so don't play too much in one sitting.

Codi loves to play video games and watch movies. He will watch almost any kind of movie just to experience them. His ideas take inspiration from the shows and movies he watches, and games he plays. He also loves a good pun.
Related Articles: Palm Trees
Share
Tweet
Share
Submit