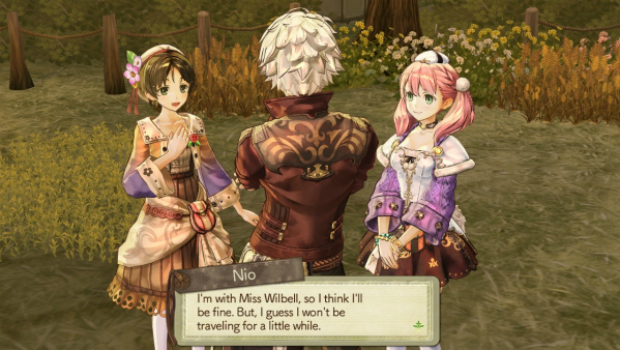 When you are a kid, it is fun to play pretend jobs, like playing “restaurant” or “doctor” or “cement mixing yard foreman’s convention organizer.” Feeling like a grown up is as exciting for a kid as convention organizing is for an adult, of course, but there is a difference. Just like no kid should ever want to play a homework sim, no adult who grinds 9-5 is going to then want to unwind with a corporate- structured work sim.

That’s the bizarre product we’re presented with in Atelier Escha and Logy Plus: Alchemists of the Dusk Sky, a JRPG filled with nebbish stereotypes, clunky movements and camera angles, long- winded cutscenes and endless tutorials that all exacerbate a patently boring and faulty game premise.

Split into two stories, Atelier E&L+ focuses on the pairing of two young alchemists beginning a new job in a dusty rural town called Colseit. Hilariously named Logix Ficsario is a transplant from the big city, a fugitive from someone unknown force and crime. His partner is a local, Escha Mailier, who is as naïve as she is petite. Both characters represent a fair bit of naivety and this bogs dialogue down from the beginning.

The two young workers come together with the task of helping the village and rebuilding a failing research and development department.  This is done through a series of jobs, side quests, and battles that test the young workers’ physical and mental acuity.

Unfortunately for us, these tasks bleed like molasses through a gauntlet-style torture tour of inane cutscenes and tutorials.  The first four or five hours of gameplay are almost entirely taken up with these tasks, minimizing early bearability and interest.  The cutscenes are long and dialogue driven, and ultimately 90 percent exposition at its laziest.  When the game does relent and actually allow for some gameplay, the outlook fails to improve all that much.

Movement in the towns and dungeons is clunky and hard to master. It’s easy to walk into obstacles and walls, and it can be difficult to avoid monsters.  The battles are initiated by on- the- map monsters that send you to a battle mode.  While on the area map, you can explore and gather materials beyond the battles, but the space provided to explore is very small.

Rather than a full-fledged dungeon or world to explore, Atelier E&L+ gives players lazy little dungeon-ettes that are nothing more than single “rooms” with a few items and monsters.  Any semblance of world exploration is sacrificed for simplicity, but the layout feels like an impoverished man’s Super Mario World, complete with little dungeon names like “Old Highway” and circular markers that create a path.

Battles are a strange afterthought in this game, as the focus is on tasks and item creation, and it is highly evident in the very simple approach provided. HP and attack values start and stay low. There is a constant battle structure where the player characters surround a grouping of enemies, and battle is static and turn-based.  Rather than a list or meter that sets turns, all characters are set on a line that has a sort-of tension effect.  When you attack or perform any action, the character is moved further to the left on that bar.  The furthest right character or enemy takes a turn.

This tension meter adds an interesting twist to a very bland and typical battle structure, but battles aren’t lacking in challenge and don’t give an overall negative experience.  There is a useful support function that can multiply attacks and also provide defense support to ailing party members.  Clunky and slow sometimes, the battles in this game are fun enough to pass but are nothing special.

Item creation is basically the name of the game, performed in an “Atelier” complete with a concrete love couch and an old cauldron.  Alchemy is, in this universe, apparently the creation of anything from healing salve to machined parts.  The exploration and battles provide you with special items that fit into categories, such as wood, metal, plant, oils, water and others.

Items require components from a number of categories to be created, and the rarer the component the better results your item will yield.  Item creation is key to the game progress and your survival.  No complaints or major problems here, and I like the way you can make items with special little tweaks depending on what components you’ve found.

All adequate but nothing exotic or fun, this hodge podge of tasking and turn based battling is set on a corporate-esque work schedule complete with schedules, task lists, deadlines, bosses (the “I’m gonna need you to fill out this form” kind), and worst of all: designated free time.  It’s a true Kafka-esque nightmare for working adult gamers, rising from a long shift looking for a release, only to open their eyes to a greasy carapace of work gaming.  This game definitely made me feel like I couldn’t roll off my back, but with the overall bland product I’m not sure I really wanted to.

Atelier Escha and Logy Plus

Atelier Escha and Logy Plus: Alchemists of the Dusk Sky is minus fun, intrigue, interest, performance, grace, dynamism, and innovation. The only clear plus is the moment you realize that the game’s corporate work theme and structure can be quit without fear of having to jump in the unemployment line. There are countless fun, modern JRPG experiences to be had on the Vita, making this an entirely expendable game.

Patrick Rost has been with Gaming Trend since 2013. At first focused on sports coverage, Patrick has gone on to cover a wide range of games and other products for the website. Outside of Gaming Trend, Patrick writes and records music, grinds perpetually in Elder Scrolls Online (PS4), and lives day to day with his two dogs, Bob and Stella.
Related Articles: Atelier Escha and Logy Plus
Share
Tweet
Share
Submit