Alice Liddell has had a fairly horrible life.  Her family perished in a fire, her home was burned to the ground, and her brain has splintered badly enough to build the fantastic setting of Alice in Wonderland and the less well-read Through the Looking-Glass in her mind.   For folks new to the twisted world that McGee created back in 2000, this is not the Disney title with cute rabbits and fat, smiling cats.  McGee and his studio, Spicy Horse, have poured a heaping bucket of nightmare fuel onto your childhood and these two titles are the result.   Imagine a scrawny and gangly Cheshire cat that speaks in a cool and deep, soothing but unnerving voice.  Imagine the Mad Hatter being a freakish, biomechanical, behatted, steampunk giant with a bulbous nose and gangly limbs.  Imagine the cute and fuzzy, fat little March Hare re-imagined as a fast-twitching, partially metal, psychotic rabbit obsessed with running.  Alice is a twisted and wonderfully wicked visual treat, but can it hold a gnarled candle to its well-received predecessor?  Once more, down the rabbit hole.

“Why is a raven like a writing-desk?”
I mentioned already that Alice is a visual treat, but it bears mentioning twice.  The folks at Spicy Horse have worked hard to build a world so fantastic and twisted that only a mind warped by repeated trauma could create it.   As Alice descends deeper into madness, her world continues to twist further.  The mechanical and fantastical blend more as she encounters grotesque and bizarre versions of her old “friends”.   Even Alice’s trademark blue dress with white trim gets some twisting as her bow becomes a skull.  As you reach other parts of Alice’s world you will get new dresses that should inspire Goth girls the world over.  There is a dress and weapon DLC pack available, giving players access to some even more freakish dress types – including one made of flesh that allows Alice to use her Hysteria power at any time.

Speaking of Hysteria, Alice’s decent into madness has granted her extreme power.   Unleashing the insanity within, Alice can slip into Hysteria.  Operating similarly to the Rage Box weapon in the previous title, when Alice slips into Hysteria her world flashes black and white.  Her body is white as porcelain, her eyes and hair as black as pitch, and color drains from her eyes and mouth as her blood-soaked weapon splashes gore all over her.  She is invulnerable in this state, but will slip back to her normal state as her rage subsides.  It is a fantastic show of just how insane poor Alice has become.  Clearly her time in Rutledge Asylum has not solved her…issues.

The world of Alice is as dark as her past, and likely her future.  London looks Victorian, full of golden sepia-toned pictures, as well as dark, smog-covered, wrought-iron places.  Alice’s mind is a different story, full of muted colors; dirty, nasty, brick and cobblestone locations; and more than enough cavernous drops.  There are a few places where flowers still grow, but most of Alice’s world is a dark and gloomy place – I can understand it given the circumstances.

“Begin at the beginning and go on till you come to the end; then stop”
Alice takes place, as I said, after the book Through the Looking-Glass.  Alice has left the Rutledge Asylum, taken to living on the street, but still seeks the council of many to try to purge her inner demons and obsession with the past.  Doctor Angus Bumby, Nurse Pris Witless, Radcliffe and even Doctor Wilson play with poor Alice’s broken

psyche throughout the game.  As you recover various bits and baubles scattered and hidden in her mind, voiceovers bring back memories of what these various characters said to and about Alice in the real world.

Susie Brann and Roger L. Jackson return to the series to voice Alice and the Cheshire Cat, respectively.  The voice work of all of the characters mentioned above, as well as that of Alice and the Cheshire Cat, are all well done.  The story is simple – Alice has returned to therapy to try to work through the tragedy that has beset her throughout her life.   As she tumbles through her own psyche, she also tumbles through the rabbit hole, taking her deeper into Wonderland.  The story, for the most part, works to tie the whole thing together, but it’s really about seeing just how crazy Alice has become.  The storyline is mostly told between worlds (there are a total of five chapters in the game, totaling about 15 hours of gameplay) when Alice pops back to Victorian London for a few moments, and in the form of collectable memories (more on these later).  If you were expecting a deep and meaningful storyline, remember that this title is primarily a platformer.

“Spare me the platitude. Do you have any useful advice?”
The first Alice title was a pretty straightforward platformer, and Madness Returns is no different.  The game is linear, with some offshoot areas for hidden objects and such.   Alice can use her dress and innate skills to jump through the air, triple-jumping and gliding from object to object.  Any good platformer is only as good as its controls, and thankfully, Alice: Madness Returns handles the controls quite well.   There are some occasional camera shifts that may cause an unintended or short jump, but since the game only punishes you for bad combat, it is really a non-issue.

Alice is capable of turning into a group of butterflies to dodge in various directions (or when grappled by various characters including Bolterflies and an old set of enemies that I won’t spoil for you). Thanks to a complete immersion in Shrinking Juice, Alice can also shrink herself at will.  Shrinking allows the player to see some otherwise-invisible graffiti that can lend clues on where you should head next, reveal hidden platforms, or guide you to hidden goodies.

Speaking of goodies, Alice will get her hands on a familiar primary weapon – the Vorpal Blade that she used to take out the Jabberwocky in the previous game.  She’ll also get a ranged Pepper Grinder, a Hobby Horse (a giant unicorn riding toy) that can be used as a large club, a teapot cannon, a clockwork, windup, bunny explosive that can also be used to solve puzzles, and even an umbrella for deflect incoming projectiles.  Each weapon is upgradable, making them fire faster or do more damage.  The currency for this upgrade is…teeth.  You collect teeth from boxes and enemies that you’ve defeated.  There isn’t an explanation on the teeth – it’s just part of the oddity.

Combat itself is mostly fluid.  You can lock onto an enemy and then hammer them with your ranged or melee weapons.  Flicking the right analog will switch from enemy to enemy, when it decides to work properly.  Most of the time Alice is taking on only a handful of enemies, but in more difficult scenarios Alice will have to take on several flying enemies, several ground enemies, and a larger boss enemy at the same time.  This means that you’ll have to take out certain enemies first to ensure you don’t end up overwhelmed.  Unfortunately, the camera may switch to an odd angle or you can end up targeting the wrong enemy, leaving you vulnerable to attack from the boss as you try to wrangle the camera back under control.  Nowhere is this more true than when you face multiple “Ruin” creatures (large, fireball-lobbing, black masses covered with discarded doll parts  which can charge and run you over) combined with a handful of Bolters and smaller monsters. While the game won’t force a reload if you die while platforming, it will if you die in combat, so the deaths at the hands of the camera hurt all the worse because of it.

“Oh, you can’t help that. Most everyone’s mad here. “
Alice: Madness Returns takes a shade more than a dozen hours to complete, but there is plenty to collect in the form of memories that help to unlock Alice’s fractured mind.  They also unlock concept art and the various backstory movies you encounter throughout the game.  All in all it’s a decent game with only a few nagging issues to prevent it from being great.  Comparatively, I think that the original did it better, but Spicy Horse has done a respectable job with the sequel. 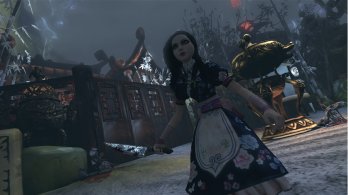 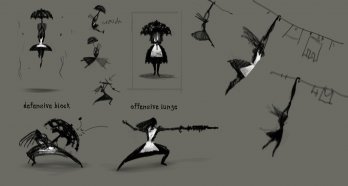 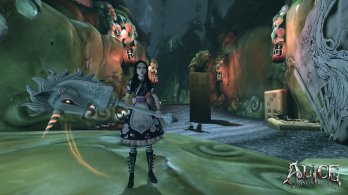 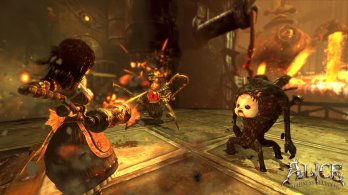 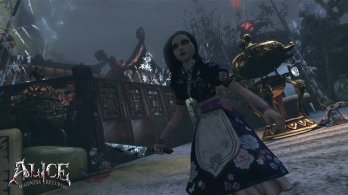 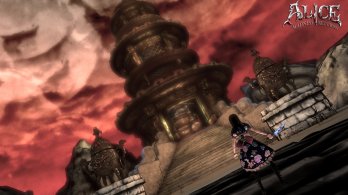 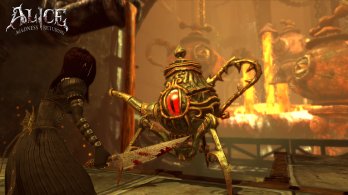 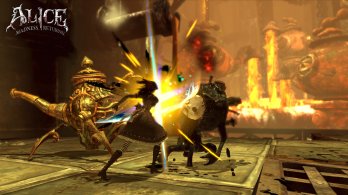 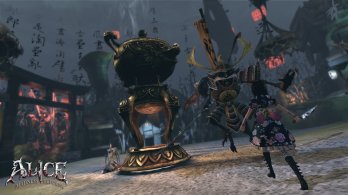 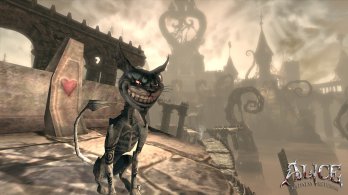 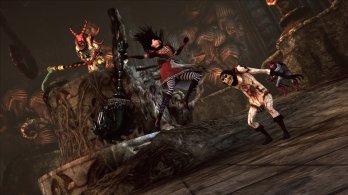 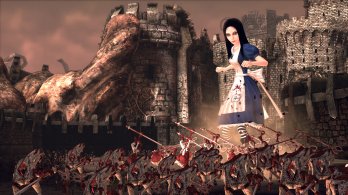