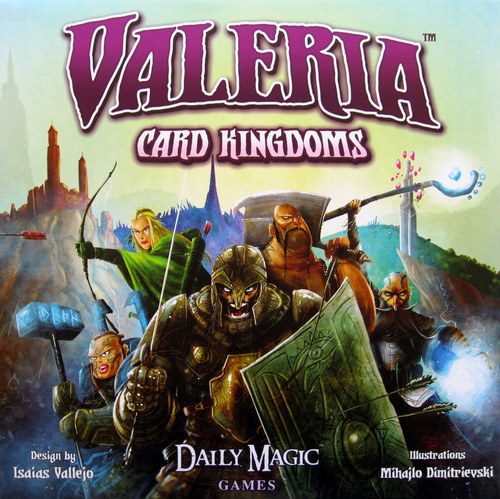 As beasts swarm into the Kingdom of Valeria, the loyal Dukes and Duchesses know what they must do: manipulate the situation for political power! During this time of struggle you will turn all the power of your citizenry and personal domain towards the goal of expanding your authority as much as possible. Valeria displays itself as a tableau of cards that you can access through citizens and domains to finally take on the monsters afflicting the kingdom. The most effective ruler will be victorious, expanding his or her influence and gaining the favor of the king.

Though in the vein of Macho Kori, Valeria comes to life with its own style and vision as soon as you open the box. The painted heroes, villains, and landscapes all are all sharp edges and twisted proportions in an almost cubist representation of forms. You never lose the sense of adventure as you look over these cards. Valeria is a place in struggle, scrambling to get itself ready as the threat surges towards it. Even the lowly peasant has a story to tell if you look at the card for more than a quick glance. The cards themselves are made from a firm stock, and because the game does not require any shuffling, you could forego sleeves and not have to worry about their longevity.

Each of these people feel alive, filled with a different emotion at the coming struggle

As for the cards, Valeria consists of a few key types: citizens, monsters, dukes and domains. Domains give you special abilities, such as exchanging resources for one another or gaining them under special conditions. Some Domains also allow you to manipulate your own dice rolls, giving you crucial control over future turns. Dukes act as secret objectives for each player, granting extra victory points for specific types of monsters, resources, citizens, or Domains at the end of the game. Citizens are the real meat of the experience: they are your resources, and each have numbers associated with them from one to twelve. Whenever a player rolls that number it triggers the citizen, which grants gold, magic, or damage potential to any player who possesses it. Finally, monsters are the ultimate goal for endgame scoring. During play, you will be building up to eliminate these foes, gaining resources and victory points each time you slay one.

Dukes, and Domains have a slight issue in that their function is communicated through symbols on the cards. With monsters and citizens this is no issue. They cost a certain value and give you certain resources. The other cards, however, change aspects of the game in ways that do not always make sense looking at the cards alone. During every one of my playthroughs, at least one person had to open up the rulebook to find out how one of the cards worked, and it took time away from play.

The dice are also sure to last the test of time. The thick, metallic looking plastic and large print makes you want to use them as soon as they hit your hand. Listening to them clack together it is almost as if a sound engineer pulled out the essence of what dice rolling is supposed to evoke. It may sound strange to mention, but the game’s box has one of the most considered layouts I have seen in a long time. The insert includes specialized reference markers for easy access to each type of card and small foam separators between the card types. Moreover, there is room specifically left for those of you who do want to sleeve your cards. It is a series of small gestures that shows Daily Magic Games put a lot of thought into their product.

Unfortunately, less thought seems to have been put into the rulebook. While the actual play of the game is intuitive and simplistic, poor layout choices left me inferring certain key aspects purely by deduction. To get you into the game quickly, the rulebook starts with an example set up and a functional version of the rules that is only enough to play your first round. The theory of getting everyone up to speed on the basics is appreciated, but it leaves you confused as to how or why certain things function the way they do. The play of the game is put before the concepts actually explaining it, and it leaves you feeling uncertain as you navigate the rules. Most concerning is that finding out how to set up games after the first remains unclear even once you have finished the rules. It took some logic to tease that one out, which is a shame because it is an incredibly simple matter.

Once you do learn the rules, you get an intuitive strategy game with a ton of replay value, especially because of the manageable length. Replay is also helped by variety: many of the monsters and citizens can be exchanged for others during subsequent plays for a new experience of the game. After set up, playing the game is effortless. You begin by giving each player a Knight (basic damage dealing unit), and Peasant (basic resource gathering unit), two gold and one magic. Everyone also gets two Dukes (from which they choose one) to help shape their strategy throughout the game. You also lay out each of the citizens from one to twelve (pictured below) and five of the eight stacks of monsters from lowest value to highest in each stack. Below the citizens you place five random Domains, and then you are ready to play!

Each round proceeds quickly, since the dice introduce randomness and limit your options in such a way that players will not be bogged down trying to strategize. The active player rolls both dice and may manipulate one of them if he or she has an appropriate Domain. Each dice, as well as the total, triggers a citizen. (For example rolling 3 and 5 triggers the Mercenary, valued 3, the Peasant, valued 5, and the Champion at value 8). The active player gains resources from each of their applicable citizens and other players with those citizens gain a lesser amount, notated on the right of each card. If the dice do not trigger any of a player’s citizens, whether they are active or not, the active player can draw a resource of any kind from the bank.

From there, the active player has two actions. The first action available is gaining a single resource, either gold, strength or magic. Gold is used to buy domains and citizens, strength to defeat monsters, and magic that can be used as either. Magic is dangerous, however, because it cannot be the sole type of resource you use to complete a task. If you have nine magic and no gold, that magic has no purchasing power for you, so you are constantly taking a risk when you gain magic. You can also recruit a citizen to make it available to you for future rounds by paying its gold cost. You can pay the strength cost to defeat a monster and defeat it, gaining the victory points that go along with it. You have to be careful, though. Monster stacks become more powerful as you deplete them, and you could be opening the horde up for your opponents to exploit. Finally, you can purchase a Domain, but only if you already have the corresponding symbols among citizens you possess.

The designers also put thought into the layout: monsters at the top have to swarm through your ever-strengthening ranks of citizens to reach the precious lands themselves

Normally the game is over when all monsters have been slain, all domains built, or emptied stacks in total is double the number of players. At that point, which is reliably around 45 minutes, everyone counts their victory points and determines who is victorious. Valeria functions quite well between the two to four player count, and it really hits its stride if you have three or four people at once trying to balance one another. At five players things can slow down more; there are some small changes that add to the strategy but they are best used by players who are familiar with the game, due to some complexity. Valeria changes gears during the solo variant in a way that adds to the strategy and theme admirably. At this point monsters will attack your citizens and everyone will lose if they attack empty citizen stacks. This mode really highlights the theme of aristocrats working to defend their kingdom while simultaneously trying to vie for personal power.

During play, you never lose the sense that you are building towards something. Every player has to get their citizens and lands together to fight the threat while fighting against time to balance both objectives. Sometimes the tone is harmed, however, by the fact that recruiting citizens, building domains, and slaying monsters all come in the form of trading a resource for a card. The five player variant, as fun as it is, also highlights how the theme is harmed in the normal game: the kingdom is not under any kind of real threat. I like transporting this method to the lower player counts to add a sense of impending doom, but it does mess with the balance.

Valeria Card Kingdoms is a fast-paced strategy game that almost completely models the feeling of rallying your forces against an invading army. While it would have helped to take this theme more seriously, the game’s strategy is enough to carry it forward as a worthwhile experience.

John Farrell is a legal aid attorney specializing in domestic violence, living in West Chester Pennsylvania. You can listen to him travel the weird west as Carrie A. Nation in the Joker's Wild podcast at: https://jokerswildpodcast.weebly.com/
Related Articles: Tabletop, Valeria: Card Kingdoms
Share
Tweet
Share
Submit