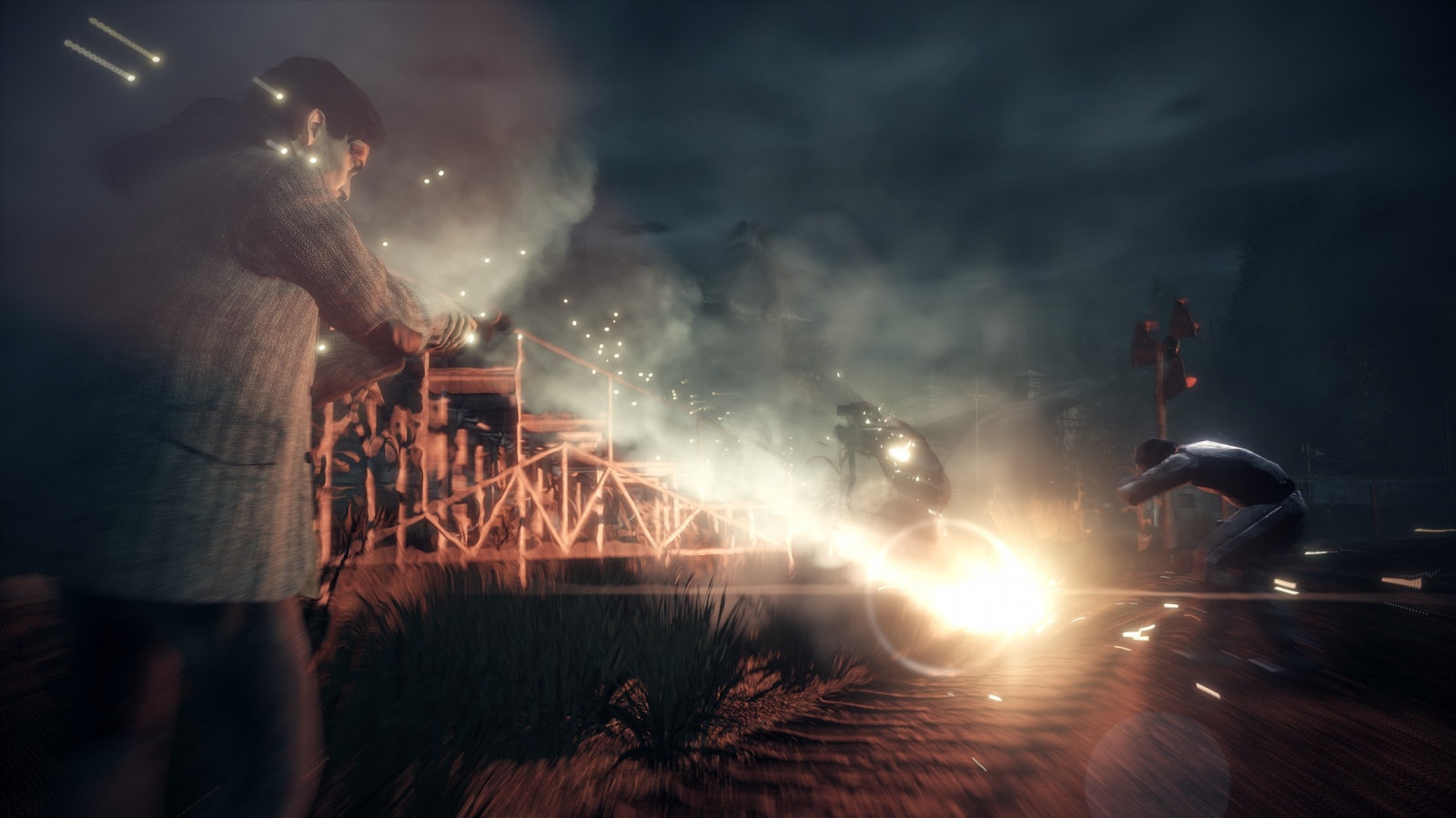 I can’t call Alan Wake a guilty pleasure, or even a secret passion, because A, there’s a huge cult following of the title, and B, I’m very forthcoming in how much I love Alan Wake. I screeched in excitement when that website listing all but confirmed the existence of this remaster, but also the connotation that Alan Wake 2 is probably happening. Of course, we’ve probably got a ways to go to get there, so an Alan Wake remaster is exactly what I need to tide me over. But not all remasters are created equal, and for every Bioshock Collection there is a Devil May Cry HD. Thankfully Alan Wake Remastered leans in the direction of the Bioshock Collection, and the return to Bright Falls feels fresh, even if its age shows a little bit.

So, I’ll go into a bit of detail, but if you want a full breakdown of Alan Wake, go and check out our Editor-In-Chief Ron Burke’s review from yesteryear. You of course play as the titular Alan Wake, a famous writer who is fighting through some serious writer’s block (don’t I know that feeling). To help, your wife Alice has suggested going on a trip to the small, nondescript town of Bright Falls, hoping that getting away from the hustle and bustle of everyday life might give you some inspiration. As you find out afterwards at the island cabin at Cauldron Lake, she’s actually booked an appointment with a doctor to try and get you back to your novel-composing ways, and that’s just not cool according to Alan. In the midst of running outside in the dark because you know your nyctophobic partner won’t chase you down (kind of a shameful move if you ask me), you hear her screaming for help. After running in and finding she has fallen down into the lake, and upon jumping in you wake up suddenly behind the wheel of your wrecked vehicle.

Things just continue to get weirder and weirder for Alan, with more twists and turns than Lombard Street in San Francisco. The story seems to follow after the strange themes you find in Twin Peaks, and even if it isn’t directly inspired, it certainly feels like it. Some of my favorite moments in video game storytelling are present in Alan Wake, and Sam Lake and Remedy should be proud of the legacy they’ve created. Nothing in the story is touched in this remaster, and it shouldn’t be, because it was perfect to begin with. What is awesome is this edition does include both additional DLC chapters, The Signal and The Writer. These add about two to three hours to the base game which is generally anywhere from ten to fifteen hours, and I’m assuming without running around trying to find all one hundred collectible coffee thermoses.

That’s a lot of ways to go about saying Alan Wake is a narrative masterpiece, but obviously in a remaster we care a bit more about how it plays and looks. Does it belong in the gaming space today, or is it too long in the tooth to work in the modern era? Thankfully, the gameplay was already solid, so all it really requires is an update in frame rate and resolution.

Let’s start off with this, a remaster and a remake are very different things. I mentioned the Bioshock Collection earlier (and I’ll probably reference it again), and that in my mind is the best version of a remaster. It reminds you of playing the game back when it was released, just without the fluff of new additions or being completely remodeled to stack up to today’s standards. A remake would fall in the realm of the recent PlayStation 5 launch title in Demon’s Souls, getting a total makeover and feeling reimagined with the technological improvements of this generation behind it. Alan Wake Remastered falls in with the former (I mean, it’s in the title), and lines up with the better remasters such as Shadow Of The Colossus.

As soon as you start a new game, you can see visually just how much Alan Wake has been improved. Everything from Alan himself, to the objects littering your environment, to the foliage, rolling hills, and mountains surrounding Bright Falls show an incredible amount of detail. You’ll see in the side by side above, Remedy put plenty of work into this one, doing their best to take advantage of the computing power available now compared to two generations ago. Everything is also crisper in the gorgeous 4K Alan Wake is rendered in, producing sharper visuals all around. The opening ferry section shows this off wonderfully, as it looks like a fog has been lifted from Bright Falls.

Alan himself has also gotten a bit of a facelift. He looks a bit off admittedly to any fan of the original, although the update to character model chosen works fine, but this is no Peter Parker from Marvel’s Spider-Man switcheroo. Because of the attention to him as well as the NPCs, the facial animations and lip sync issues that the previous iteration had have disappeared, leaving the cinematics with that movie feel. The only thing I did notice during a few of them was the frame rate dipping. Not sure why, but it’s something to be aware of.

One area the game has always been beautiful is the lighting system. Given the battle of light and dark is at the forefront, along with using a flashlight to “burn” the protective darkness from your enemies, it makes sense that Remedy would put the time and effort into it back in 2010. This may sound selfish, but with the advancements in ray traced lighting I really wish this game was a remake just to employ those methods. Sure, we’re bound to see them if Alan Wake 2 pops up (here’s to hoping), but especially with Control being a showcase for what can be done, this feels like a missed opportunity. HDR support is also MIA, and even though the game looks really good, I can’t help but think of the pop HDR might add.

Speaking of Control, as much as I love the way Alan Wake plays and I know it’s a different kind of game, I do miss how cleanly the gameplay of Control (or even Quantum Break) feels. Alan Wake, in comparison, still feels a bit clunky both in movement and gunplay, which seems like something that should have been overhauled. Alan is a writer and doesn’t have telekinetic powers, so I’m not looking for him to chuck people all over the place. But I wouldn’t mind if the dodge in particular would feel a bit more responsive, with Alan flailing away only to get caught by a pickaxe.

On the plus side, the frame rate never felt like it dipped during my time playing, with a smooth 60fps locked in. In the end, the gameplay is about what you’d expect an Xbox 360 developed third person action/adventure game to feel like, and that’s for better and worse. For it’s time it may have worked just fine, but by today’s standards it’s a little dated. That being said, it’s still fun to play, even with flaws in tow.

I played the game on PlayStation 5, so obviously we’ve got to talk about the DualSense a little bit. Alan Wake misses the mark with the haptic feedback (with only a bit of pitter patter when walking and your heartbeat pulsing when at low health), but the adaptive triggers do some good things… once you realize how to use them. Originally I felt the left trigger was too squishy, and then after a while I figured out you can pull it to about a quarter to simply aim down sights, and further to increase the intensity of your flashlight. This actually comes in handy once you understand it, because you don’t waste extra flashlight battery if you let up once you remove the darkness from a lumberjack.

Here’s one of the biggest reasons to pick up this remaster, the value of it. While plenty of titles out there are asking for forty to fifty dollars of your hard earned money, Alan Wake Remastered tops out at only $29.99 for the definitive version of the game. As mentioned before, it includes the DLC, and Remedy has even added a commentary from Lead Writer and Creative Director Sam Lake. It’s completely optional, but a neat addition to a game with it’s story firmly in the spotlight, and if you have it enabled it triggers automatically, meaning you don’t have to do anything special and can focus on the gameplay while Sam gives you the lowdown.

Alan Wake is a gold standard when it comes to telling an incredible story, and nothing has changed with that in Alan Wake Remastered. The gameplay still feels pretty awesome, even if it sometimes shows its age, but nothing about that detracts from one of the best games of the last decade which feels at home, for the most part, in 2021. Visually, this game is taken to new heights, and even if it doesn’t look or play as good as Control, Alan Wake Remastered, like the Bioshock Collection before, will leave players remembering that wonderful day in May of 2010 when they dove into Cauldron Lake for the first time. Or is it an ocean?

David Burdette is a gamer/writer/content creator from TN and Lead Editor for Gaming Trend. He loves Playstation, Star Wars, Marvel, and many other fandoms. He also plays way too much Call Of Duty. You can chat with him on Twitter @SplitEnd89.
Related Articles: Alan Wake Remastered
Share
Tweet
Share
Submit